Edinburgh was my favorite day of the trip--the Royal Mile had all the "big ticket" items I wanted to see within, well, roughly a mile, and I ended the day with a new three piece set.  ﻿
We started the day at Edinburgh Castle, which has been a fort and royal residence since the 11th Century, and has served, in more recent times, as a military garrison.﻿ 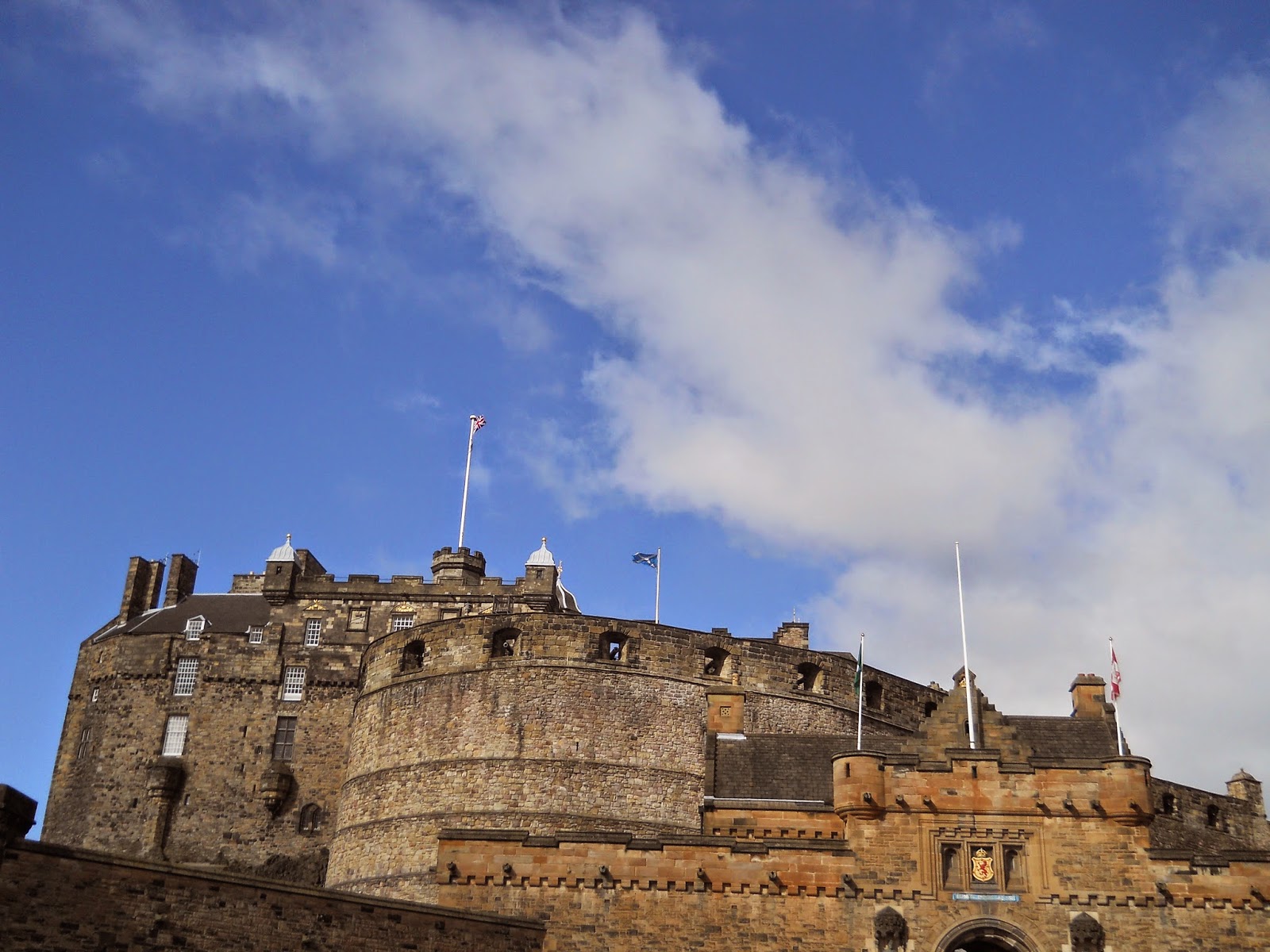 The castle included a display of the Scottish crown jewels (which are older than the English jewels and date to 1540) and the Stone of Scone (the stone of destiny),

The Royal Palace, where Scottish royalty would have lived 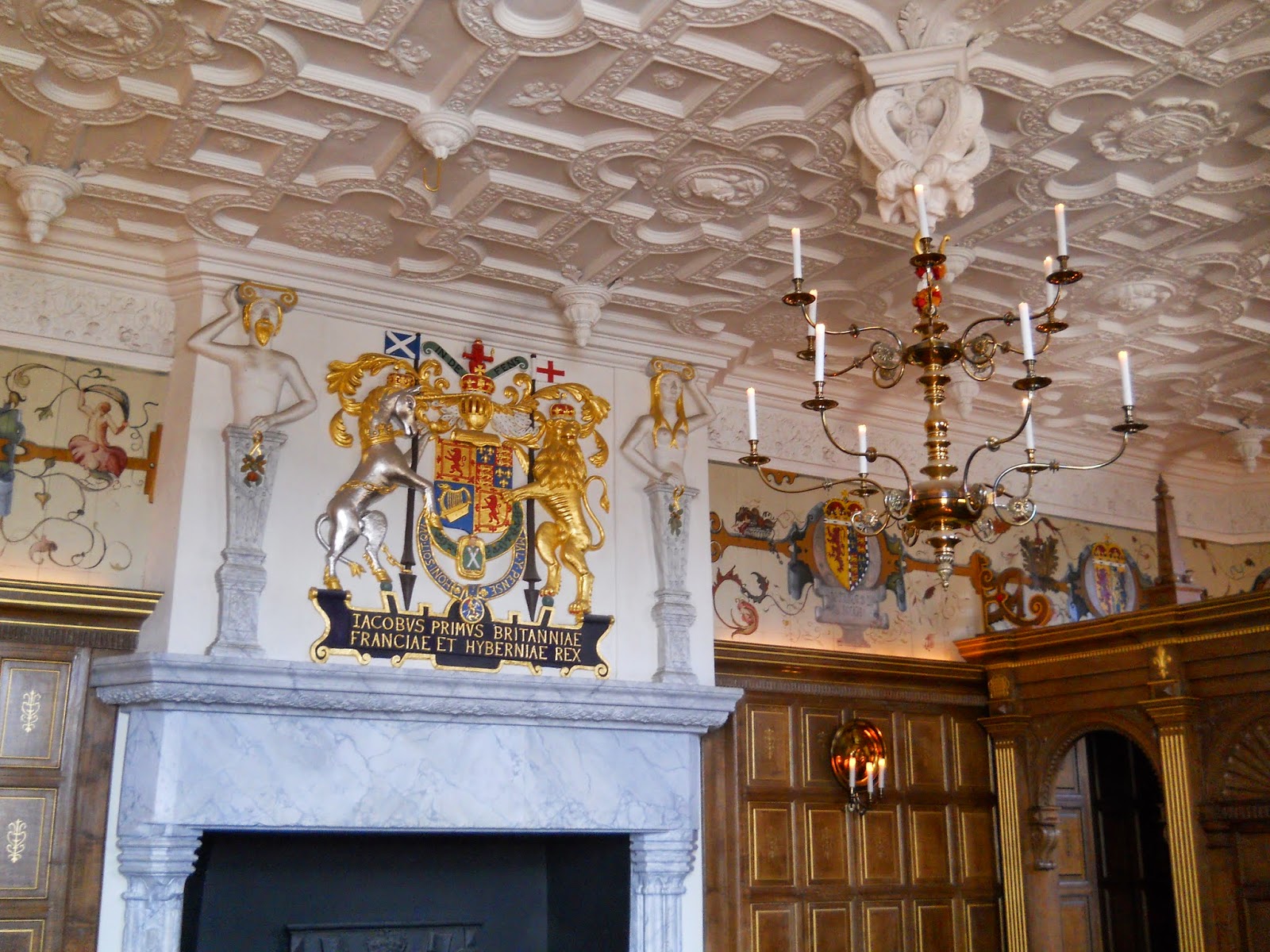 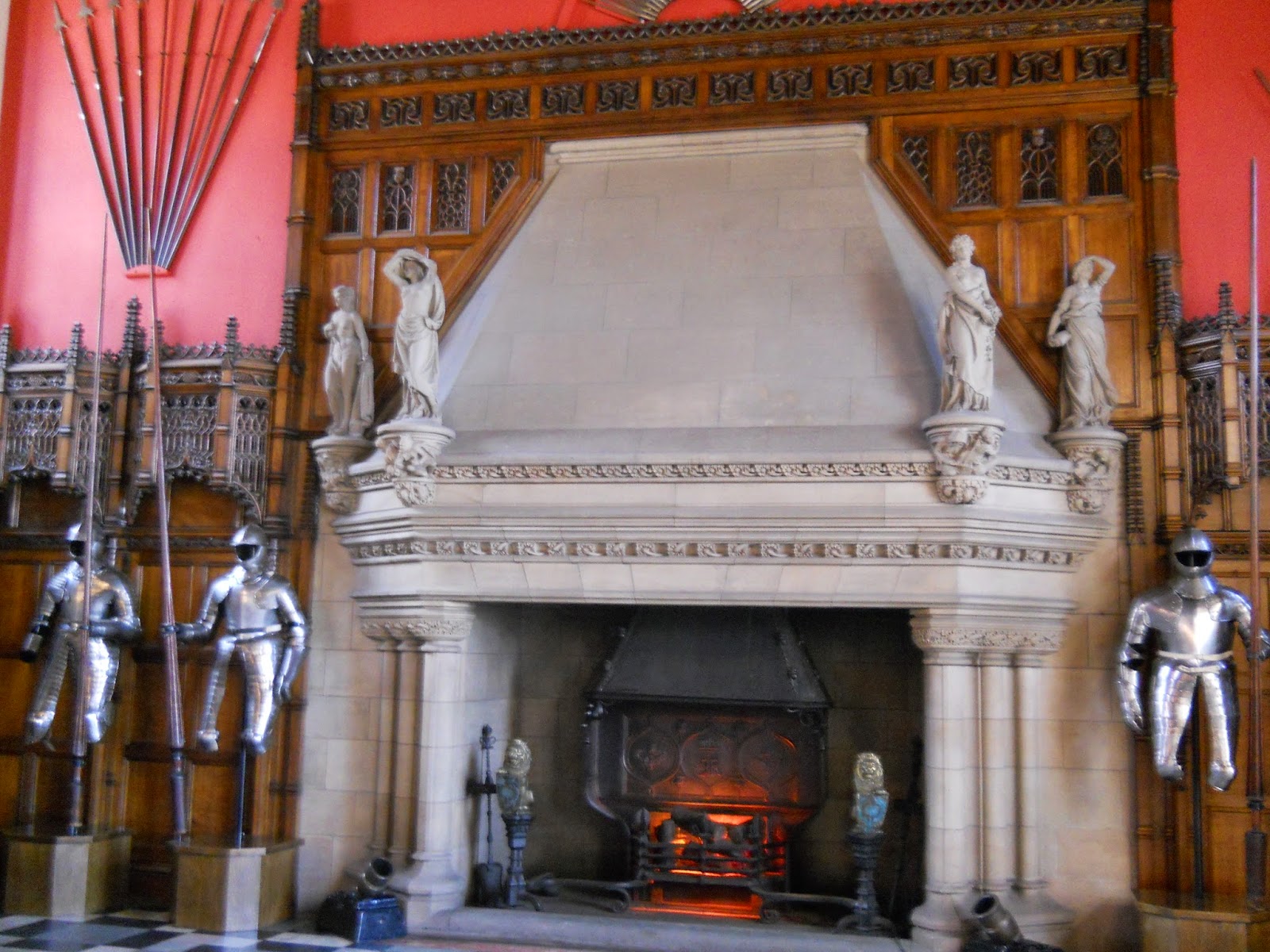 (Fireplace in the Great Hall) 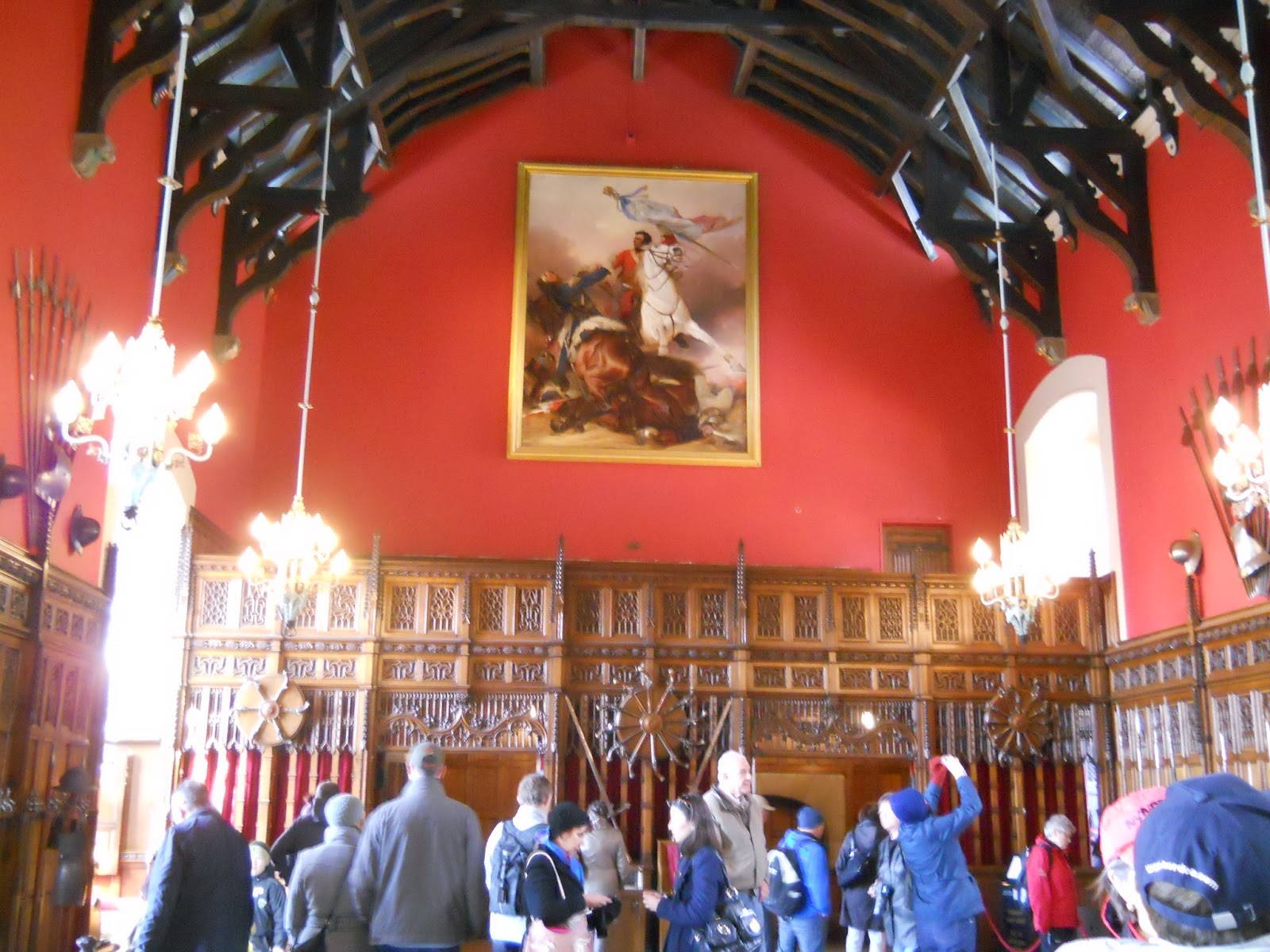 (Great Hall with its display of arms)
﻿ 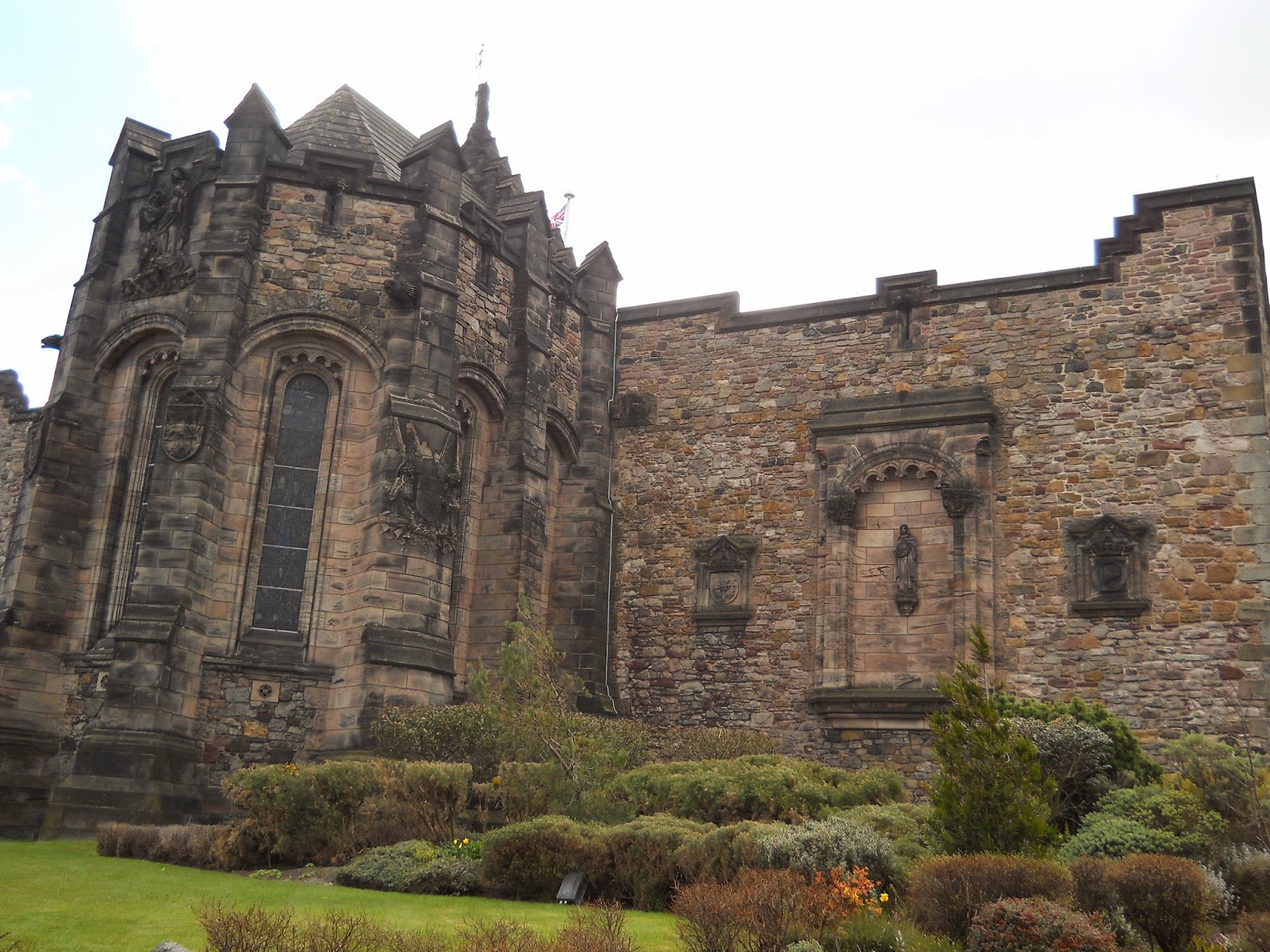 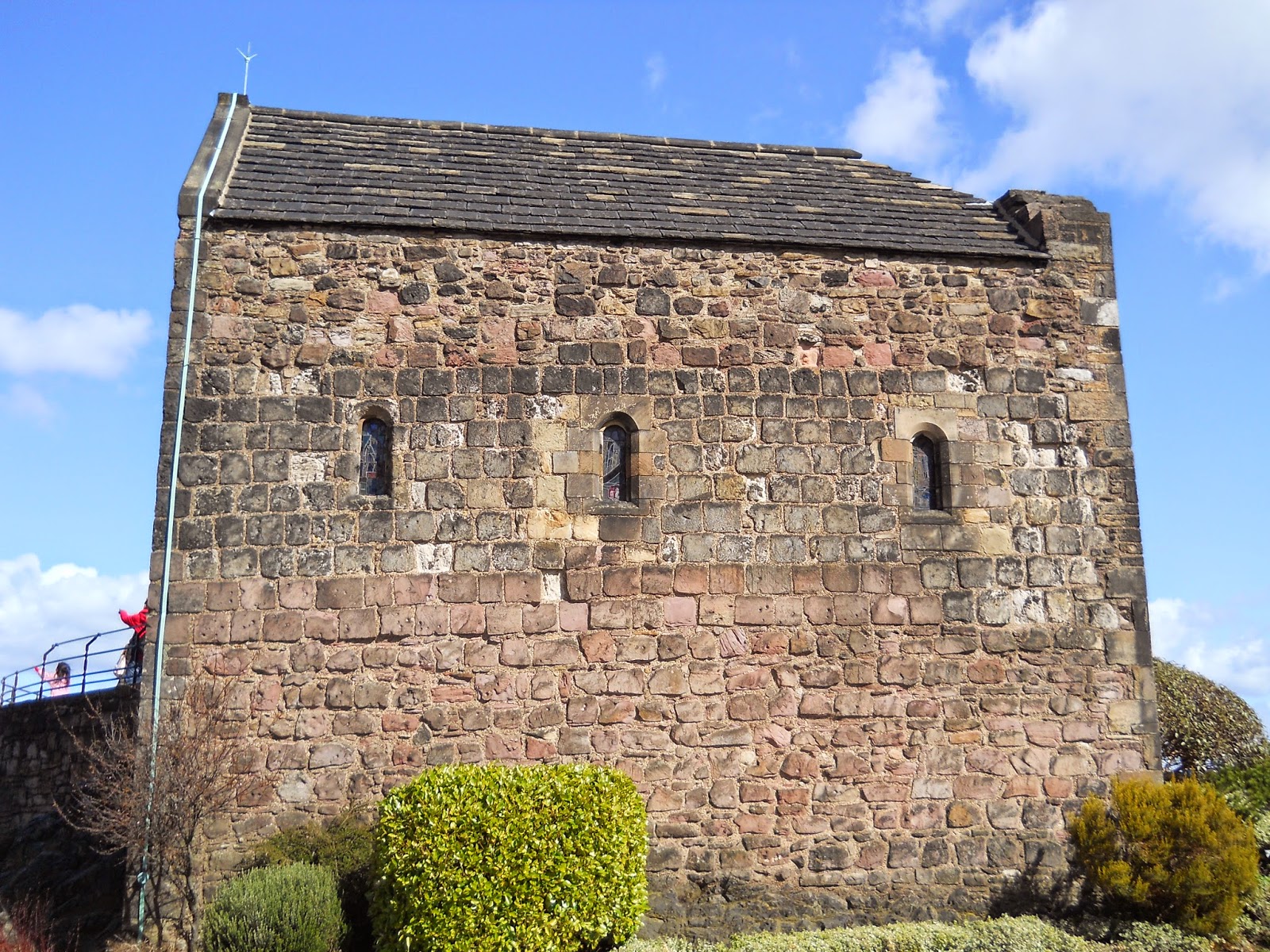 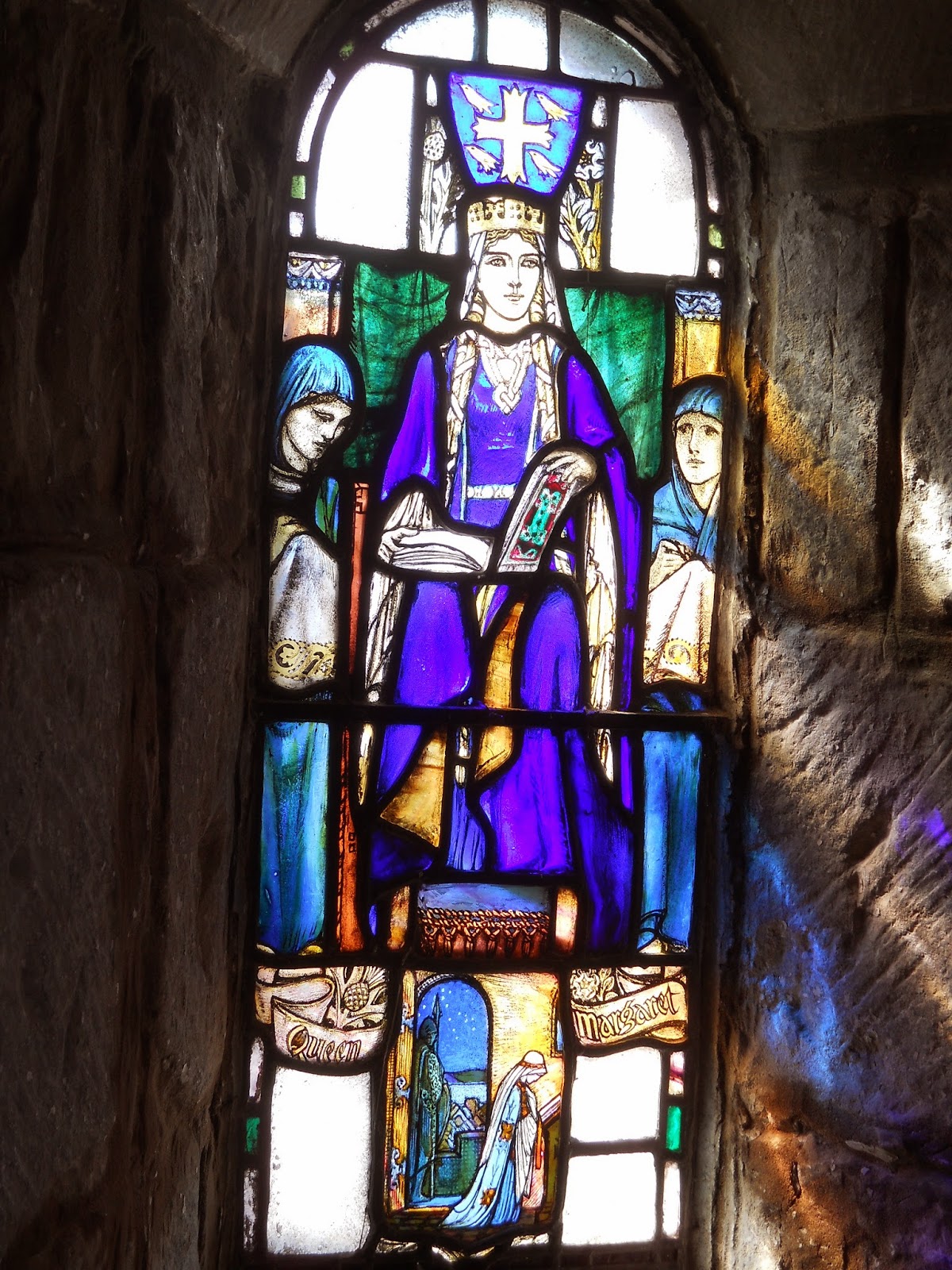 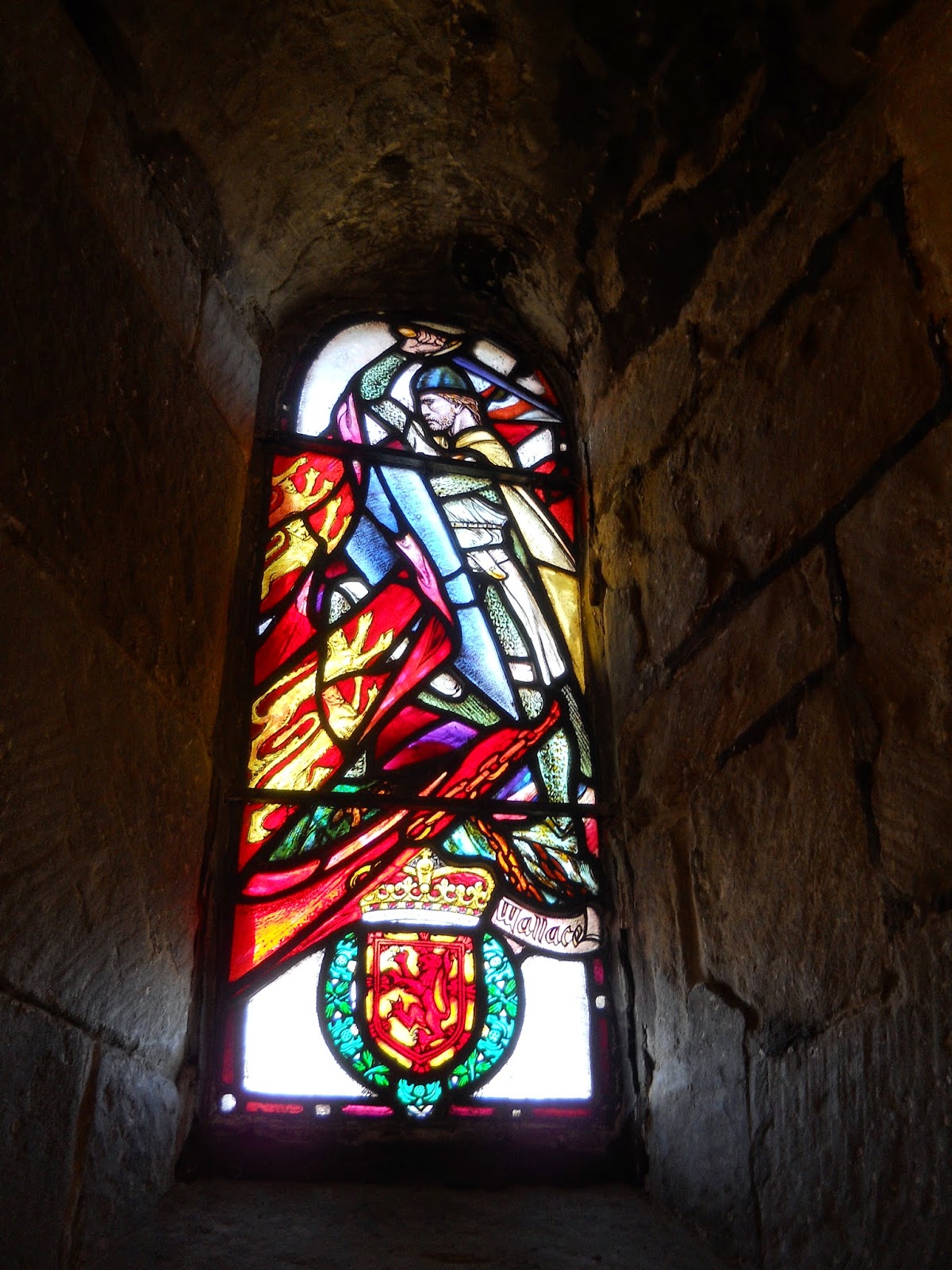 (Robert the Bruce stained glass window also in the chapel)
After leaving the castle, we started down the Royal Mile 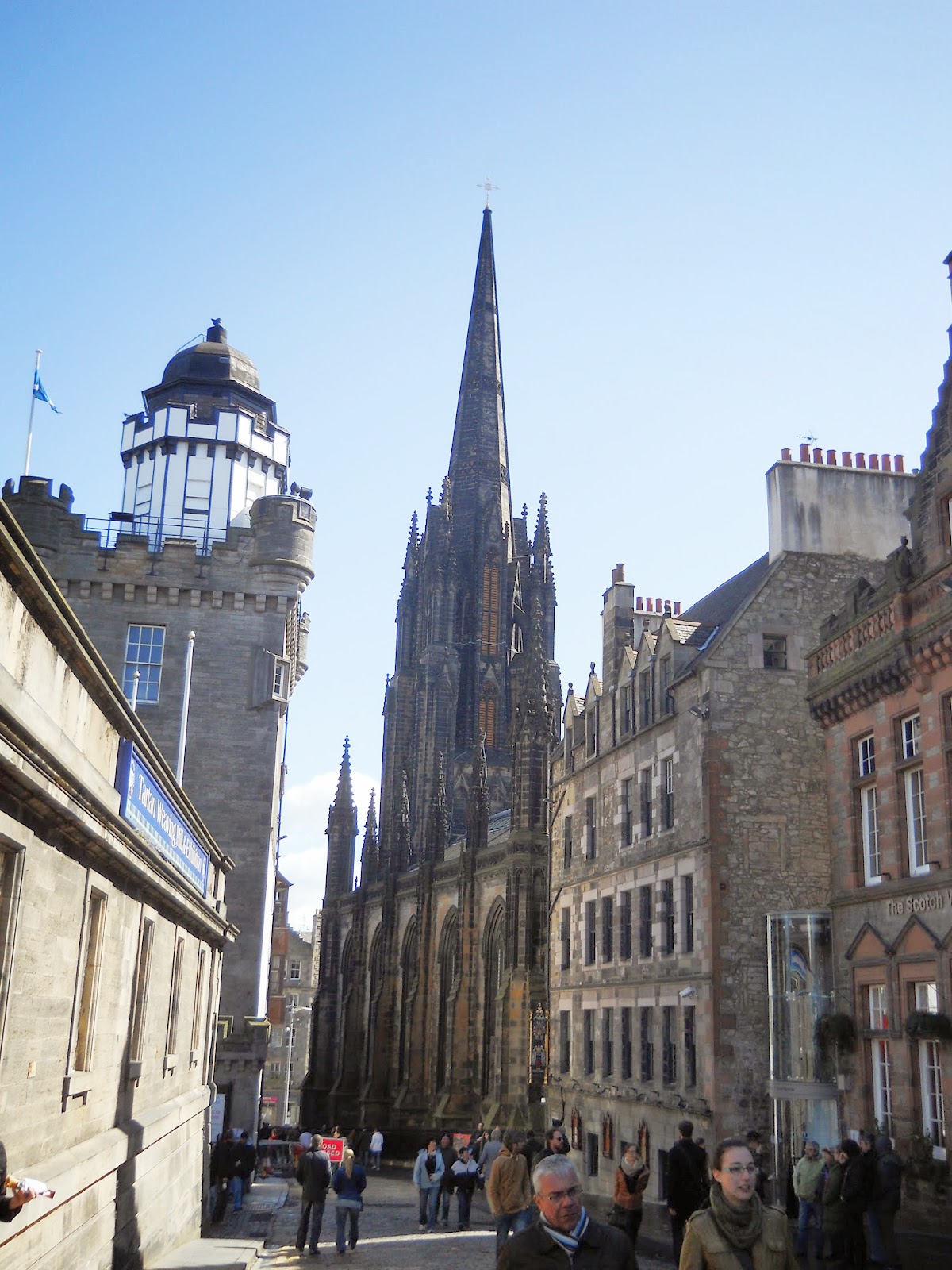 We stopped into Gladstone's Land, a merchants home dating from the 16th century to the 17th century.  This house was interesting to see how the different tenants added on through the centuries. 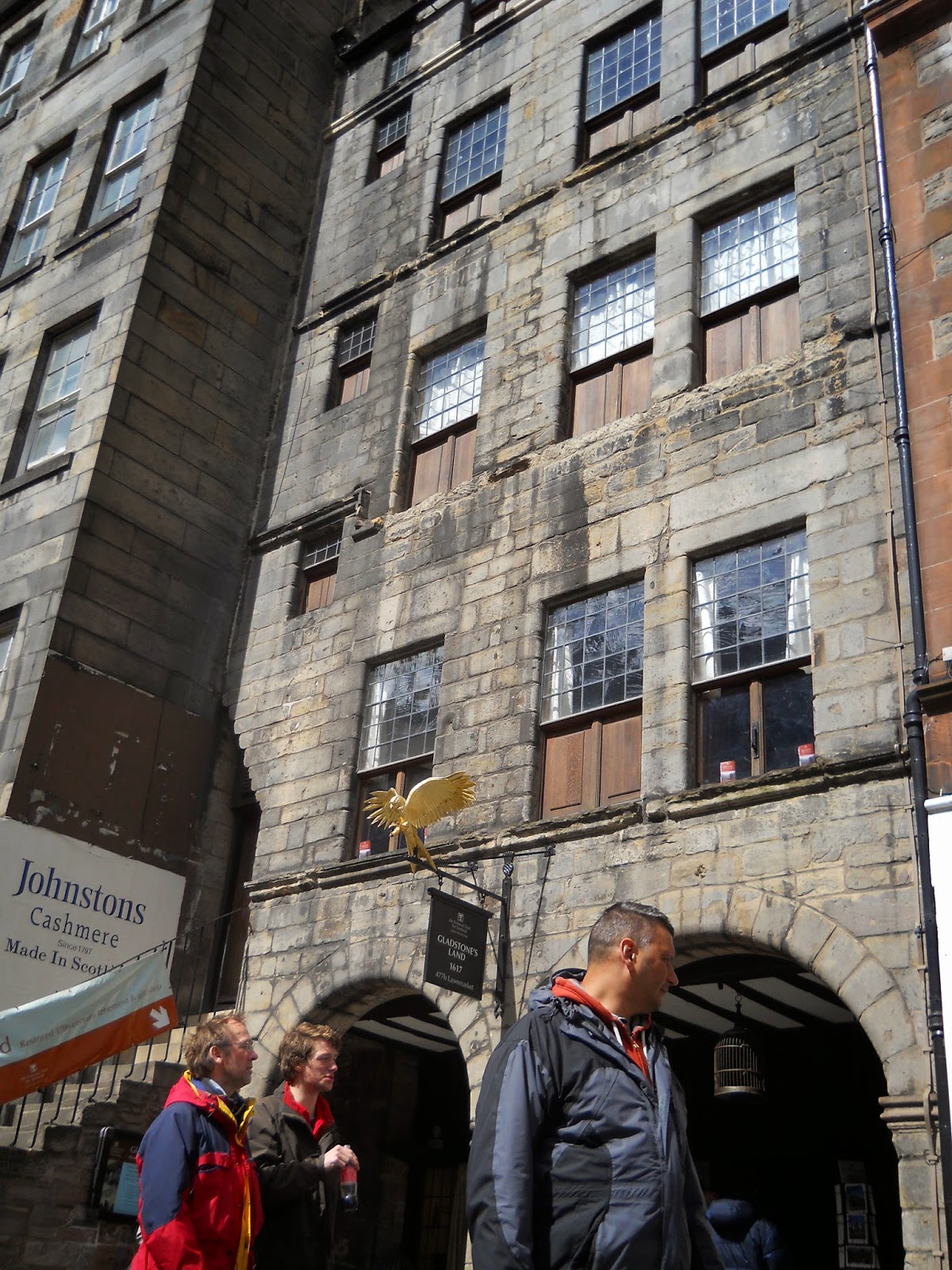 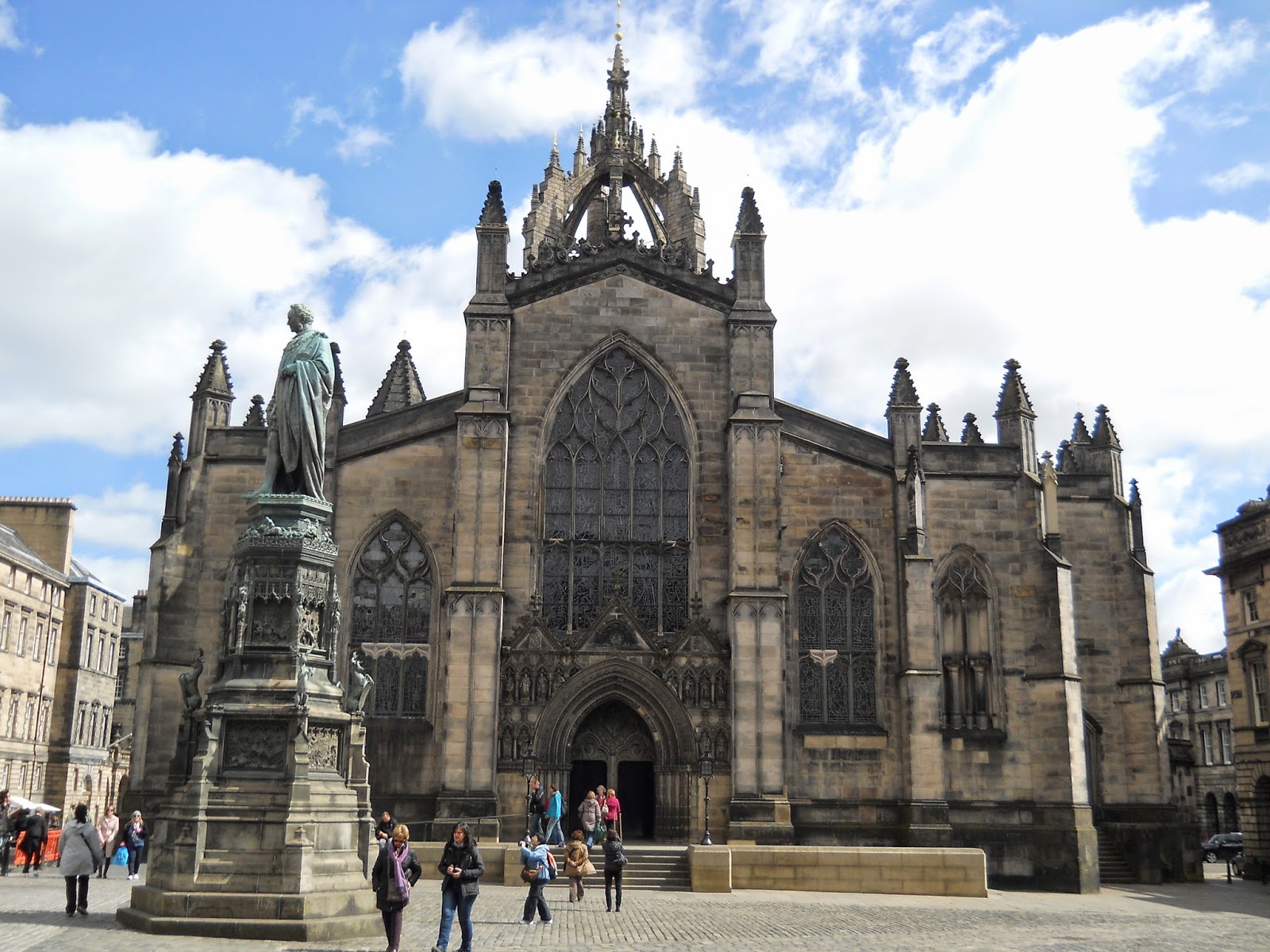 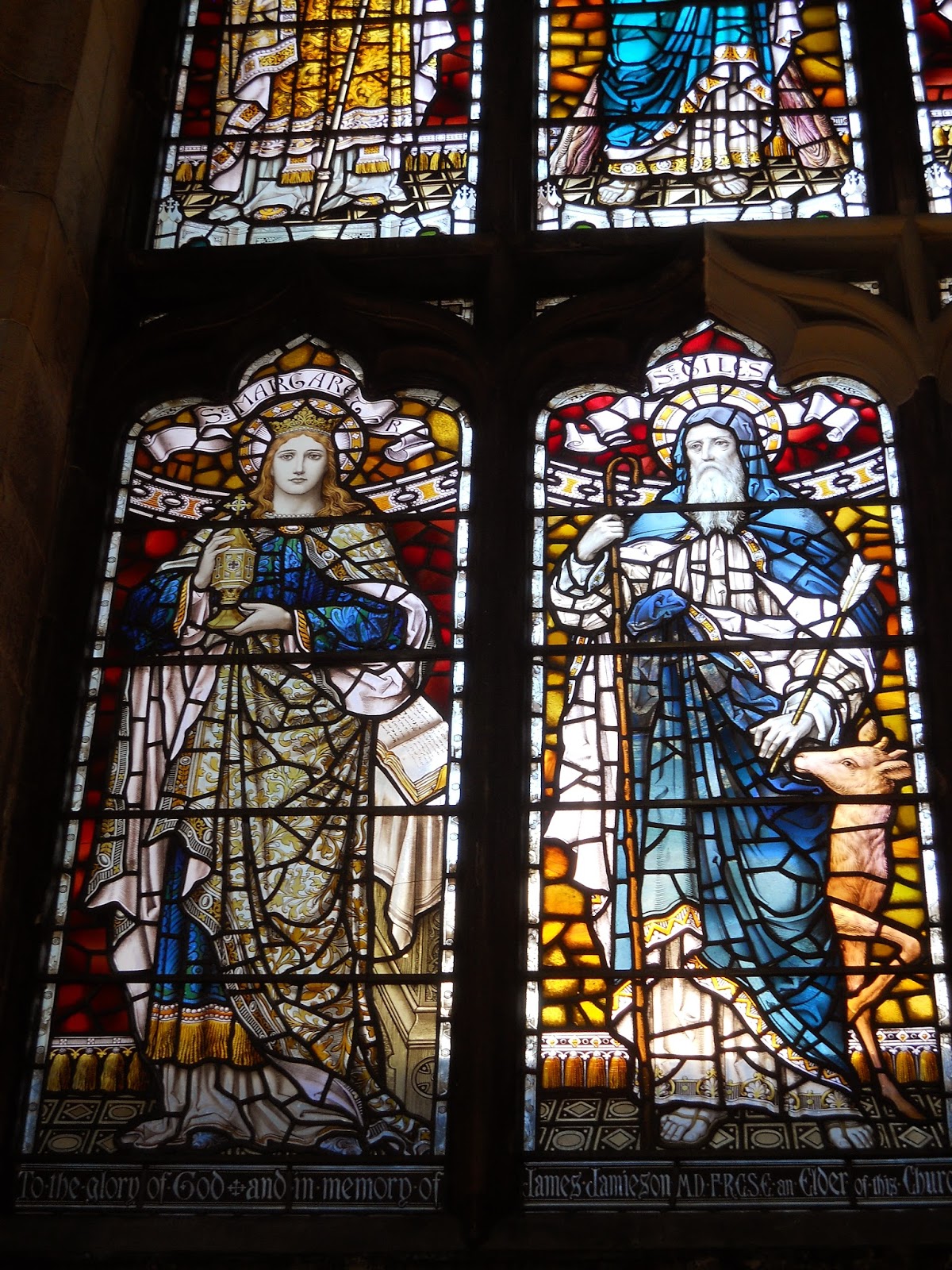 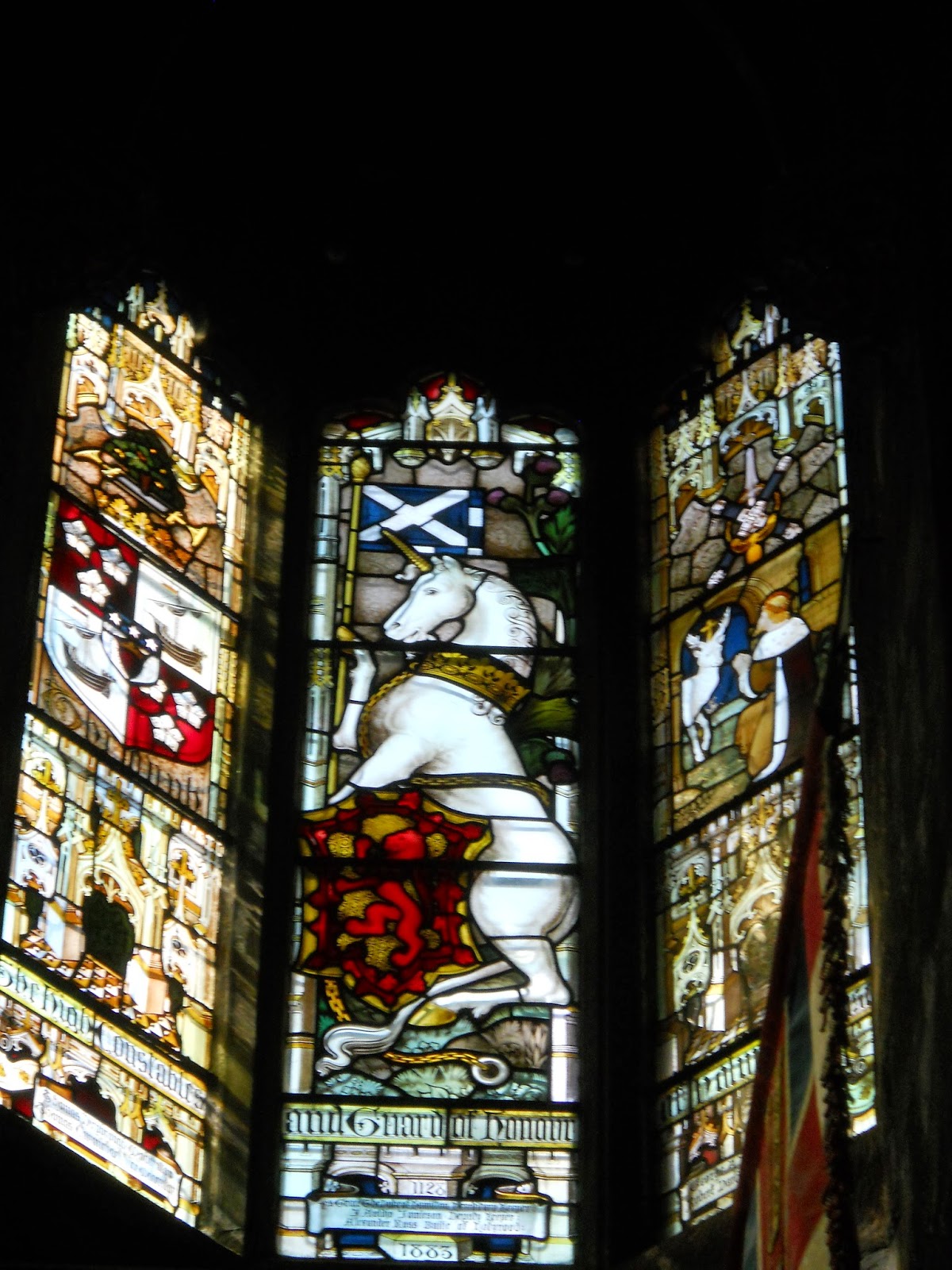 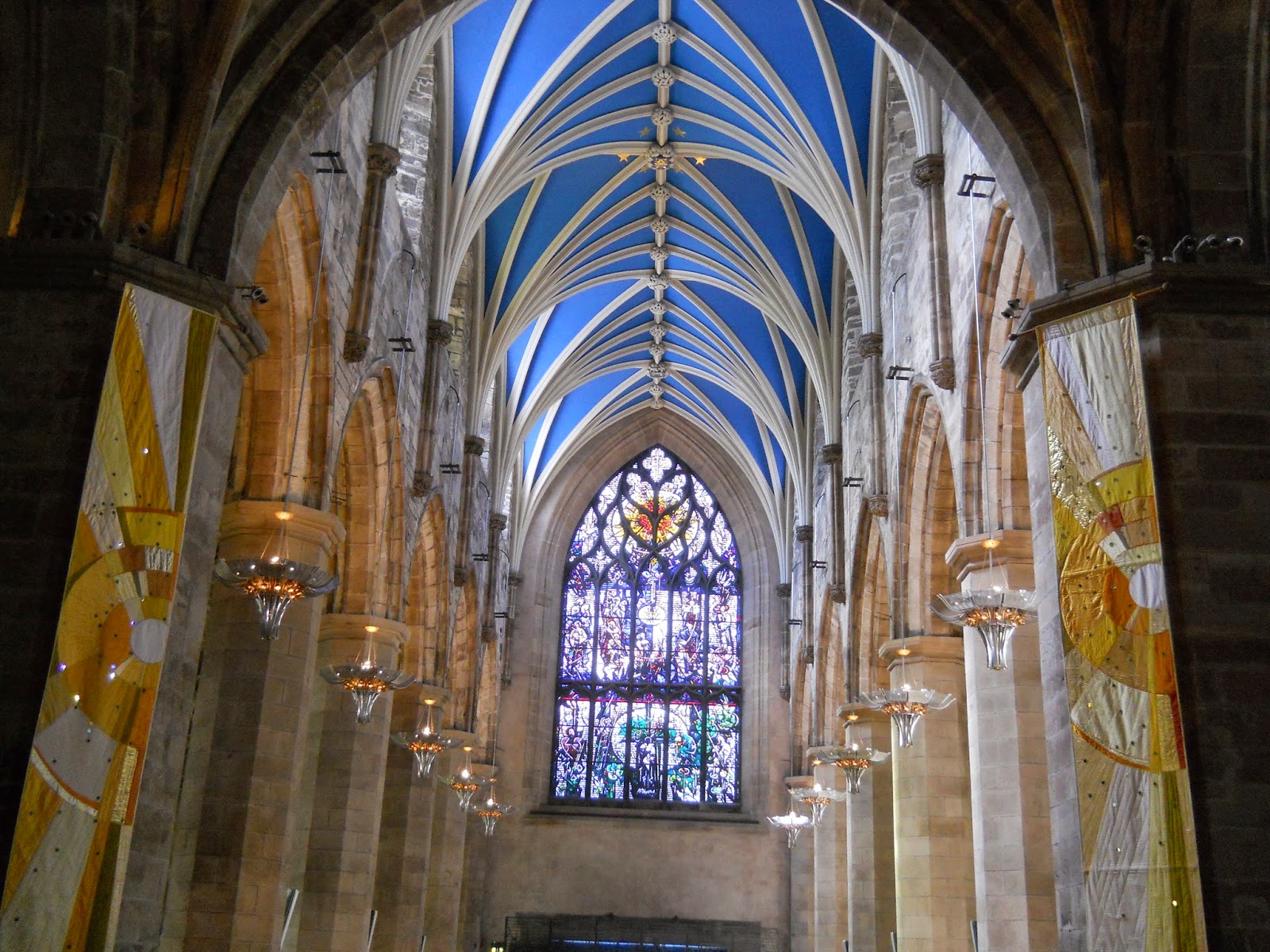 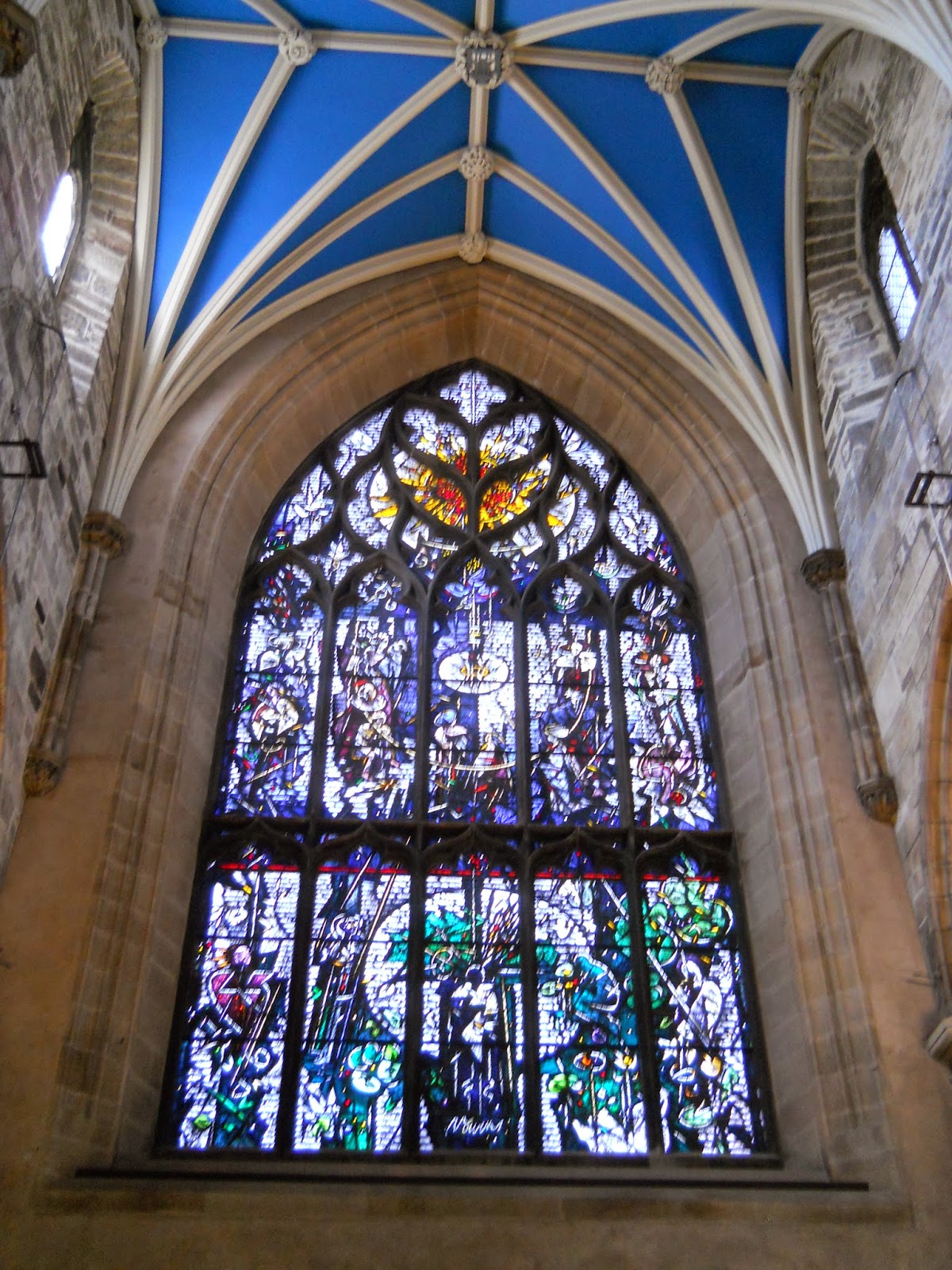 (close up of stained glass window in memory of Robert Burns)
Here is a bit of a poem by Robert Burns to Edinburgh:
Edina! Scotia's darling seat!
All hail thy palaces and tow'rs,
Where once, beneath a Monarch's feet,
Sat Legislation's sov'reign pow'rs:
From marking wildly scatt'red flow'rs,
As on the banks of Ayr I stray'd,
And singing, lone, the lingering hours,
I shelter in they honour'd shade.
From the Cathedral, we continued down the Royal mile, stopping for lunch in a pub, and then passing by (and into) stores full of wool and cashmere, shortbread, and other fun gifts, until we reached the Palace of Holyroodhouse, which has stood at the end of the royal mile since the 14th century.﻿ 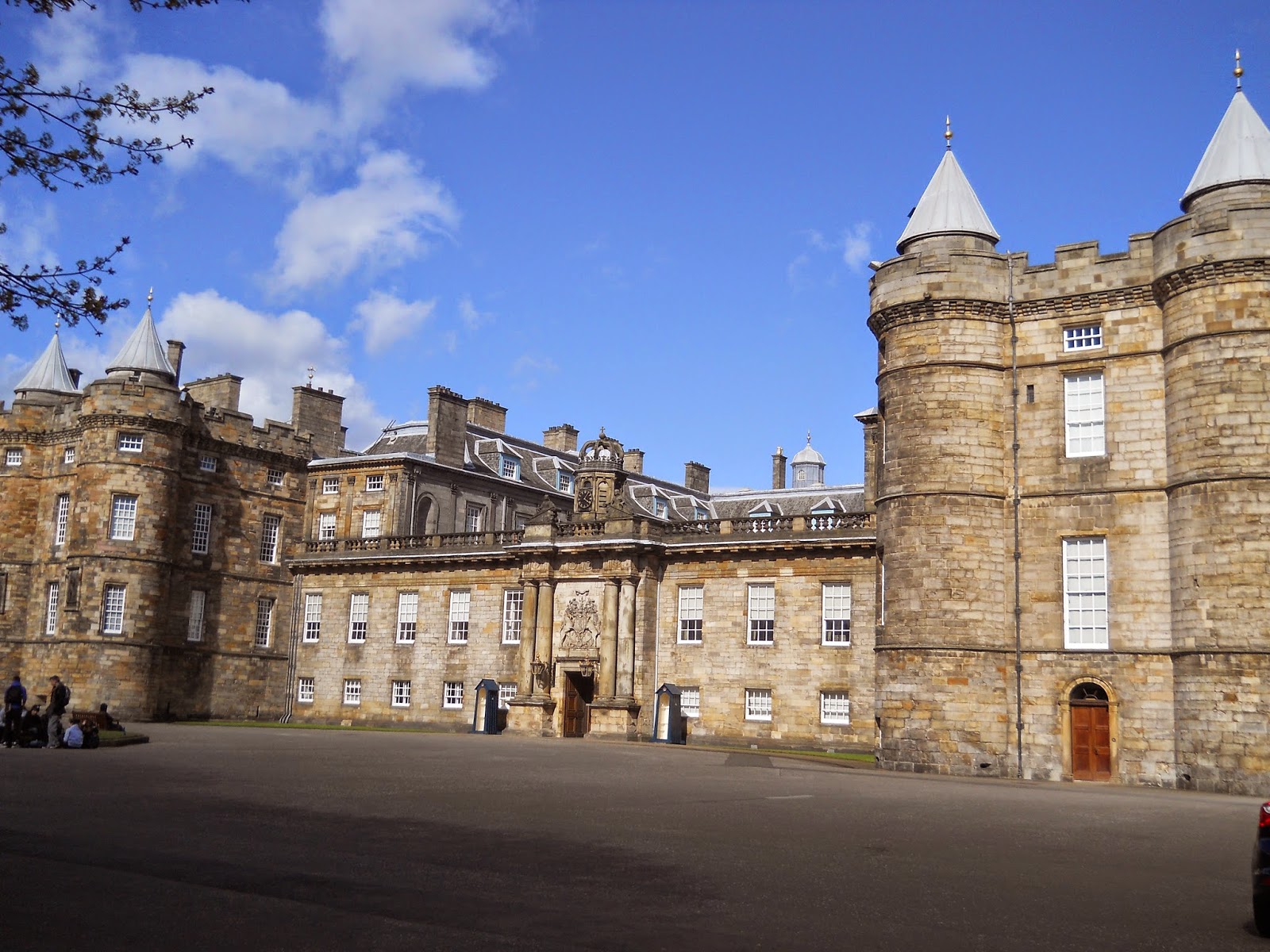 (Holyroodhouse Palace)
Unfortunately, we were not allowed to take pictures in the Palace (which was the preferred home of Mary Queen of Scots, and is currently one of Queen Elizabeth II's palaces).
Also on the grounds of the Palace are the ruins of an abbey﻿ originally founded in 1128. 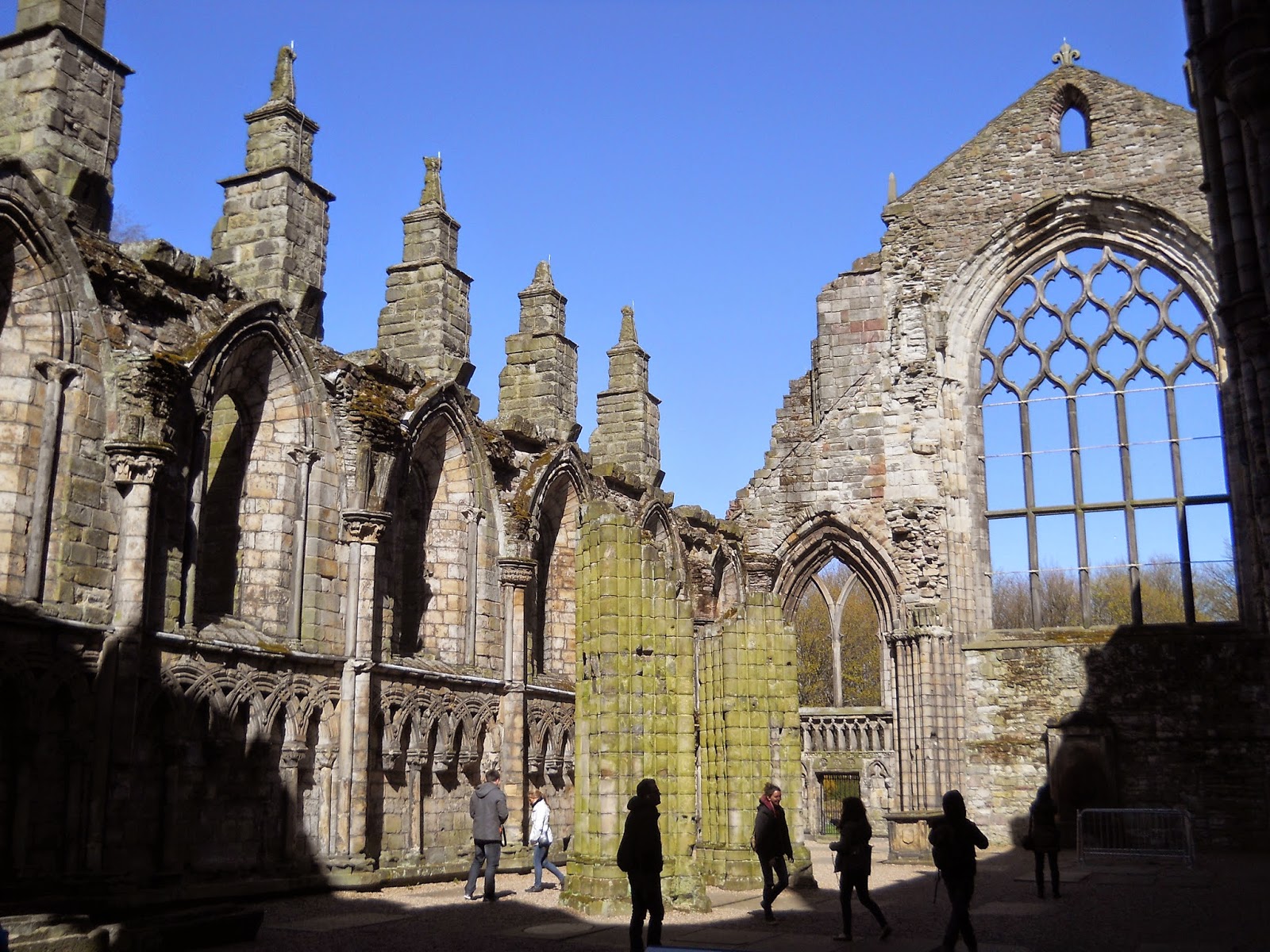 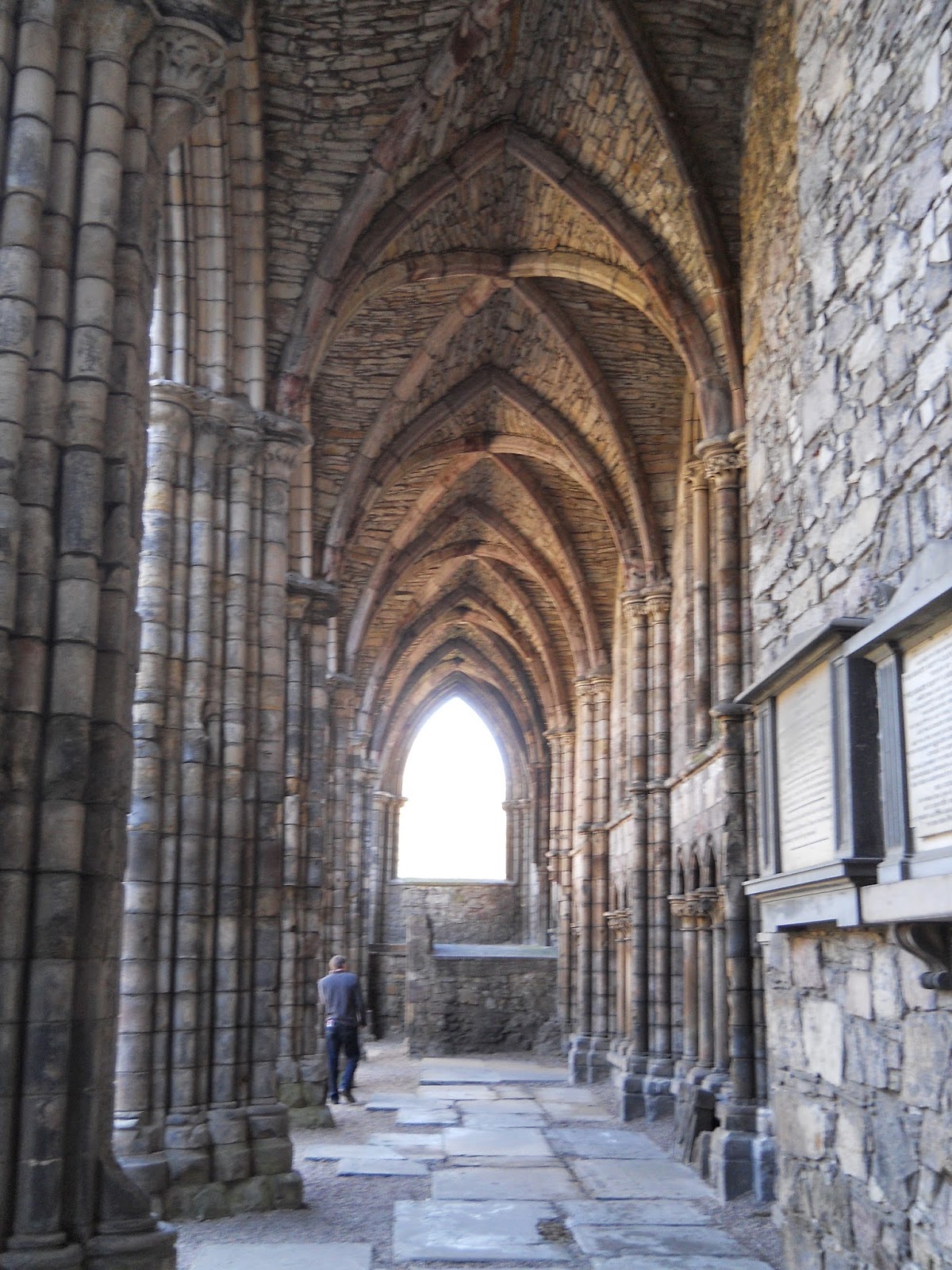 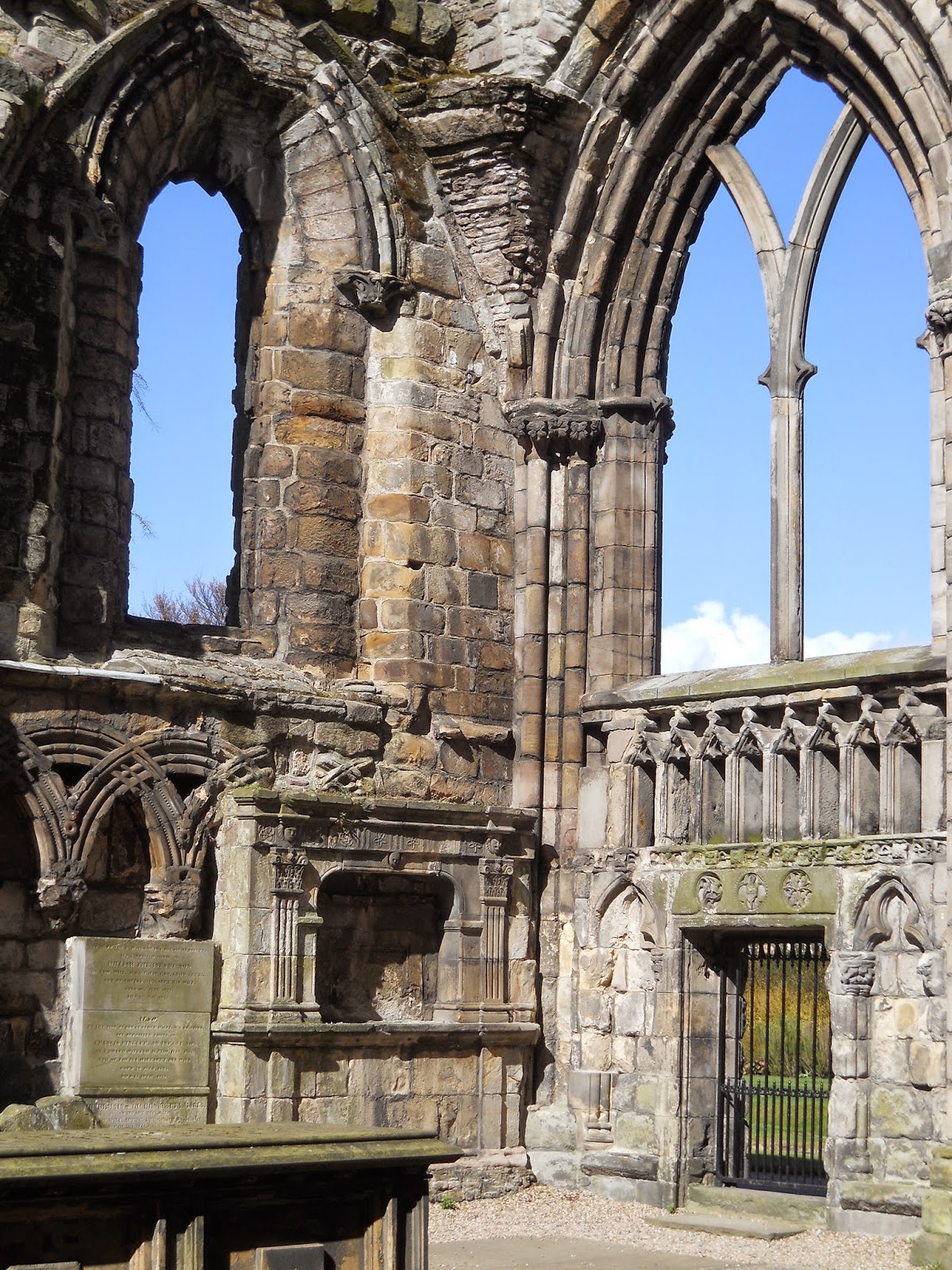 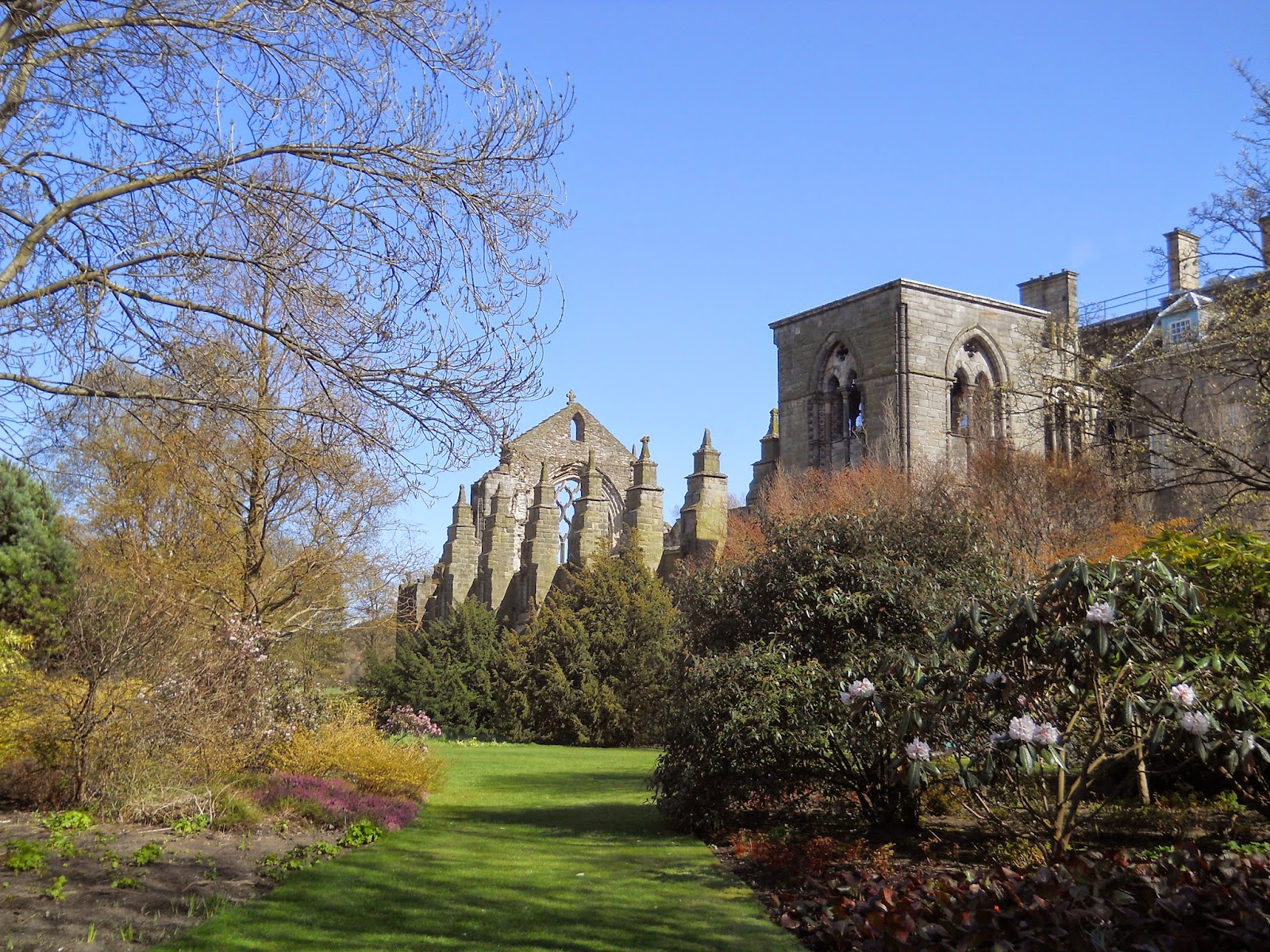 (view of the Abbey from the park around the palace).
So in one day we saw a castle, an example of a 16th-17th century merchant's home, a cathedral, a palace, and abbey ruins.  That in itself was enough to make for a wonderful day...and then I stepped into the gift shop at Holyroodhouse and saw this: 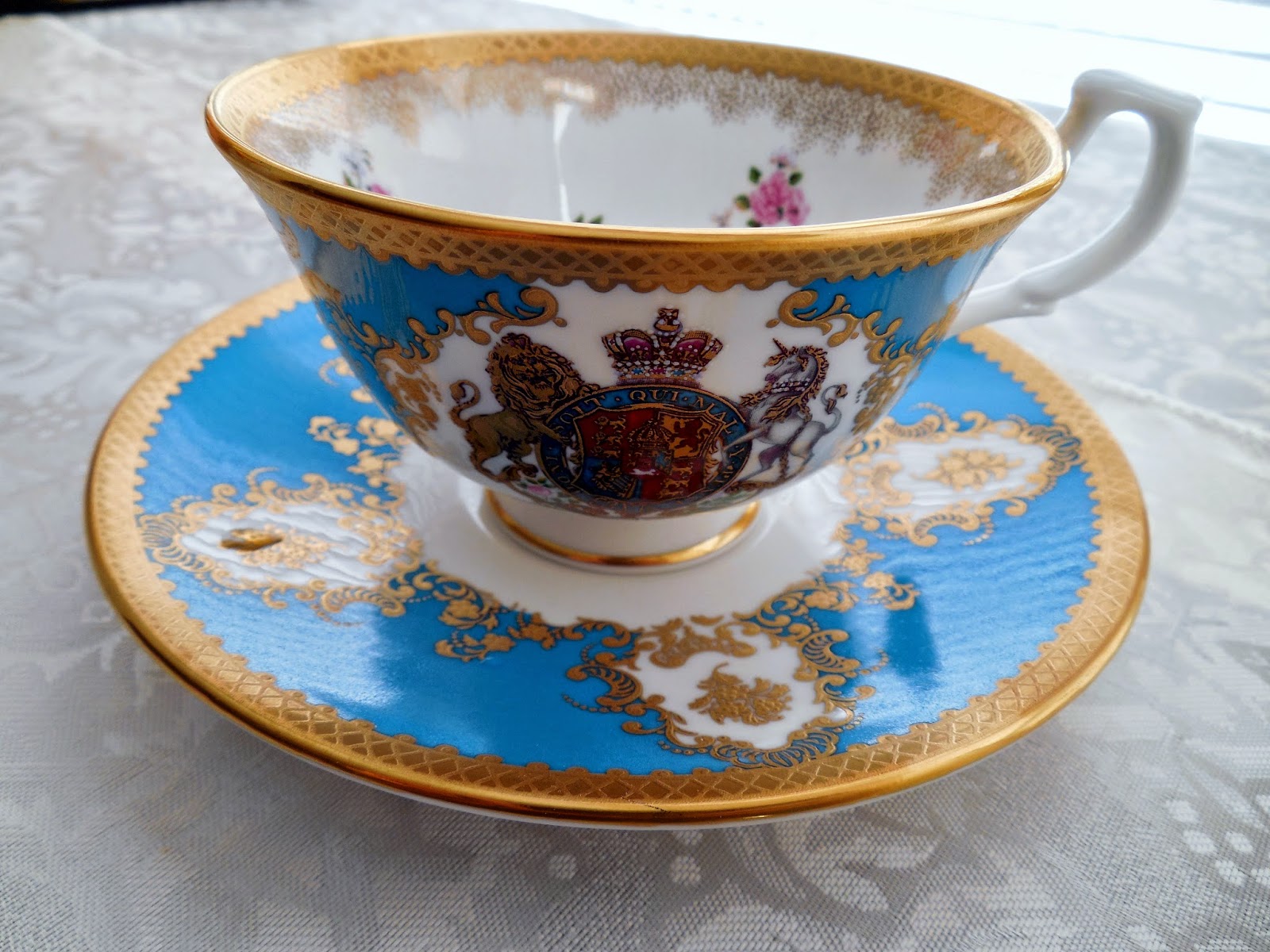 There was a whole set of the china.  I was drawn to the luncheon plate﻿ 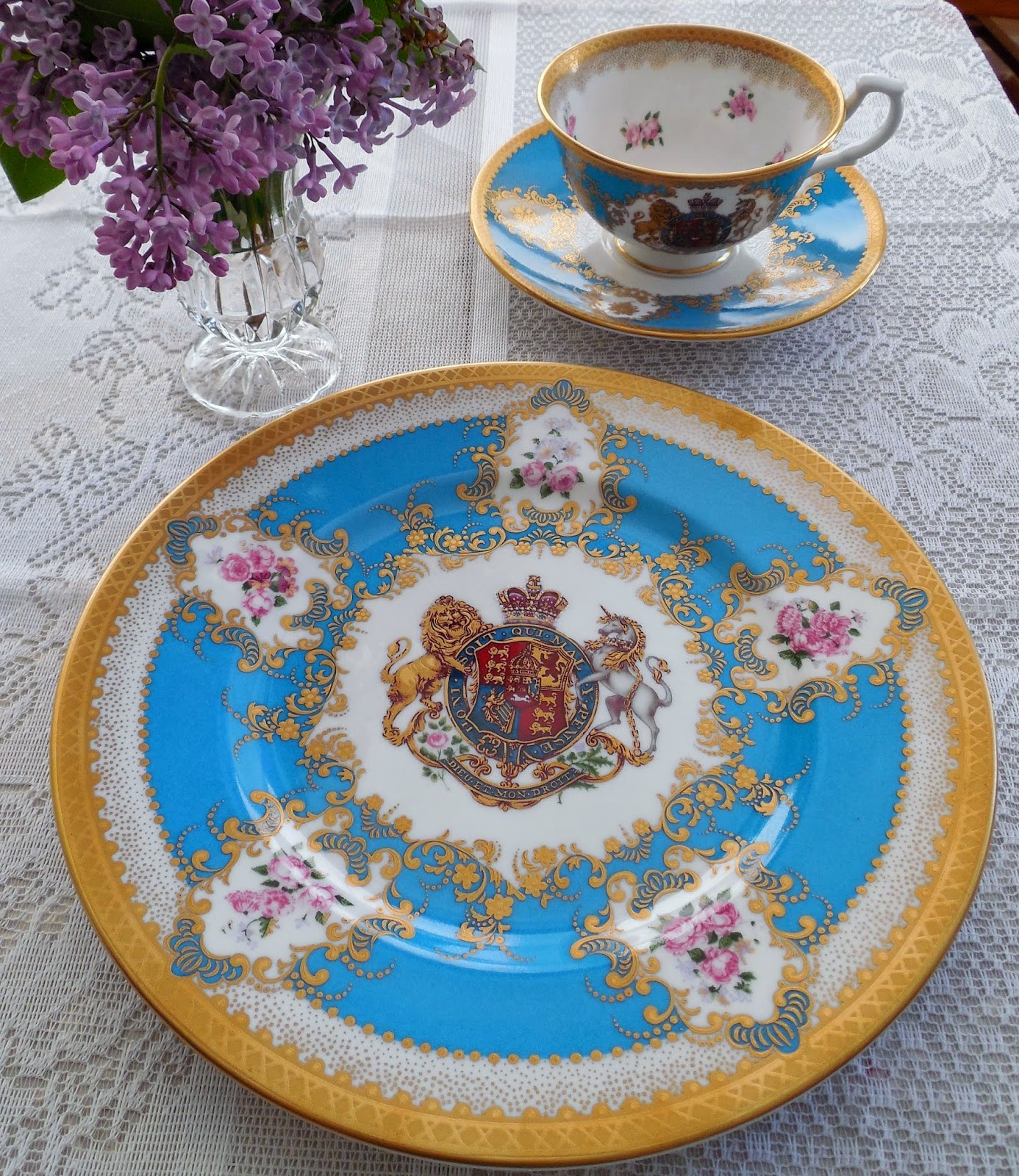 Here is a close up of the beautiful design in the middle: 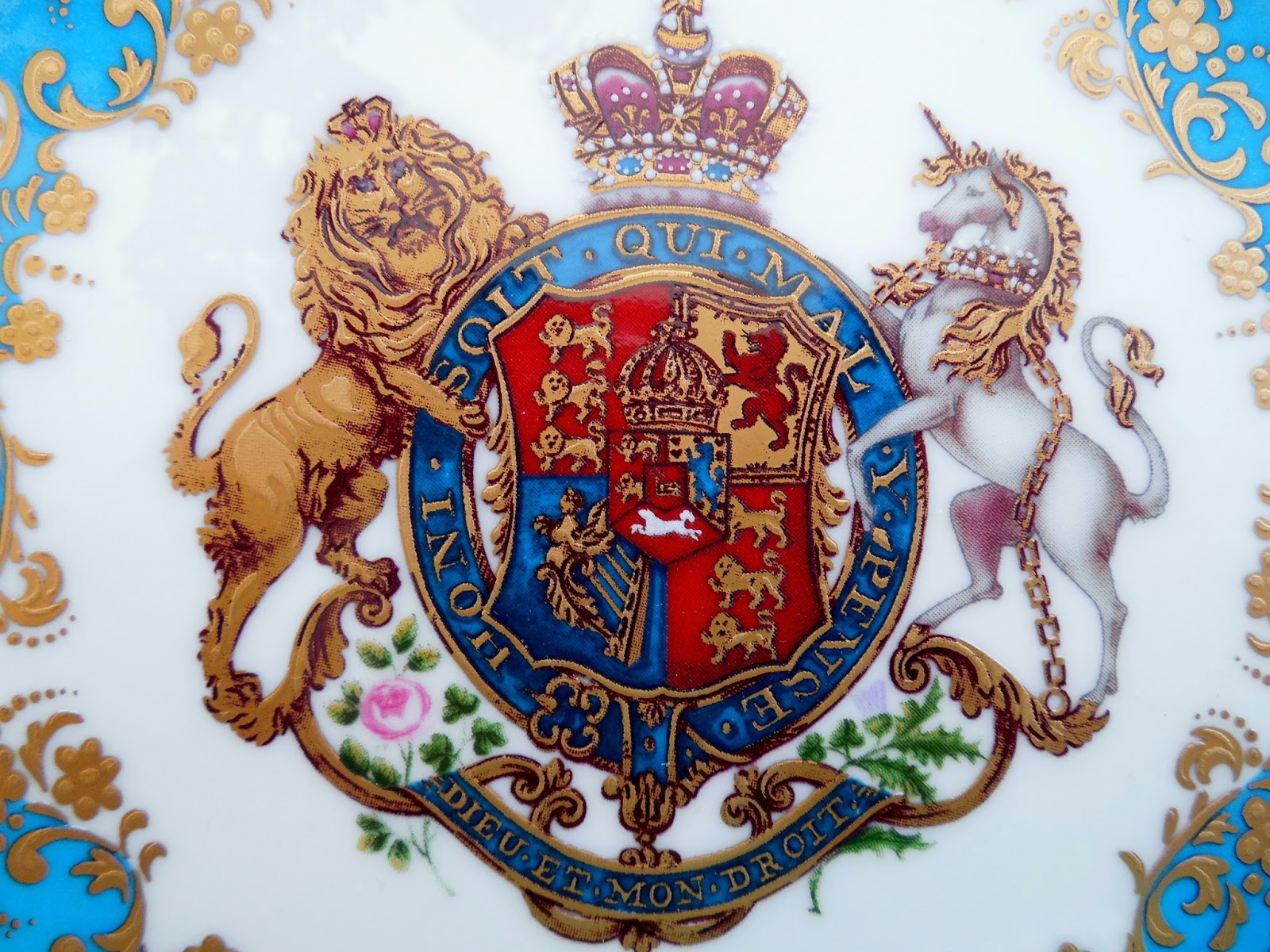 If you look closely at the crest, there is a rose, the symbol of England, under the lion, and a thistle, the symbol of Scotland, under the unicorn.  This set is from the Royal Collection by Old Durham Road and is made in England.  This particular pattern is based on a highly embellished version of the Coat of Arms of King George IV and King William IV, found in the pantry of Buckingham Palace. 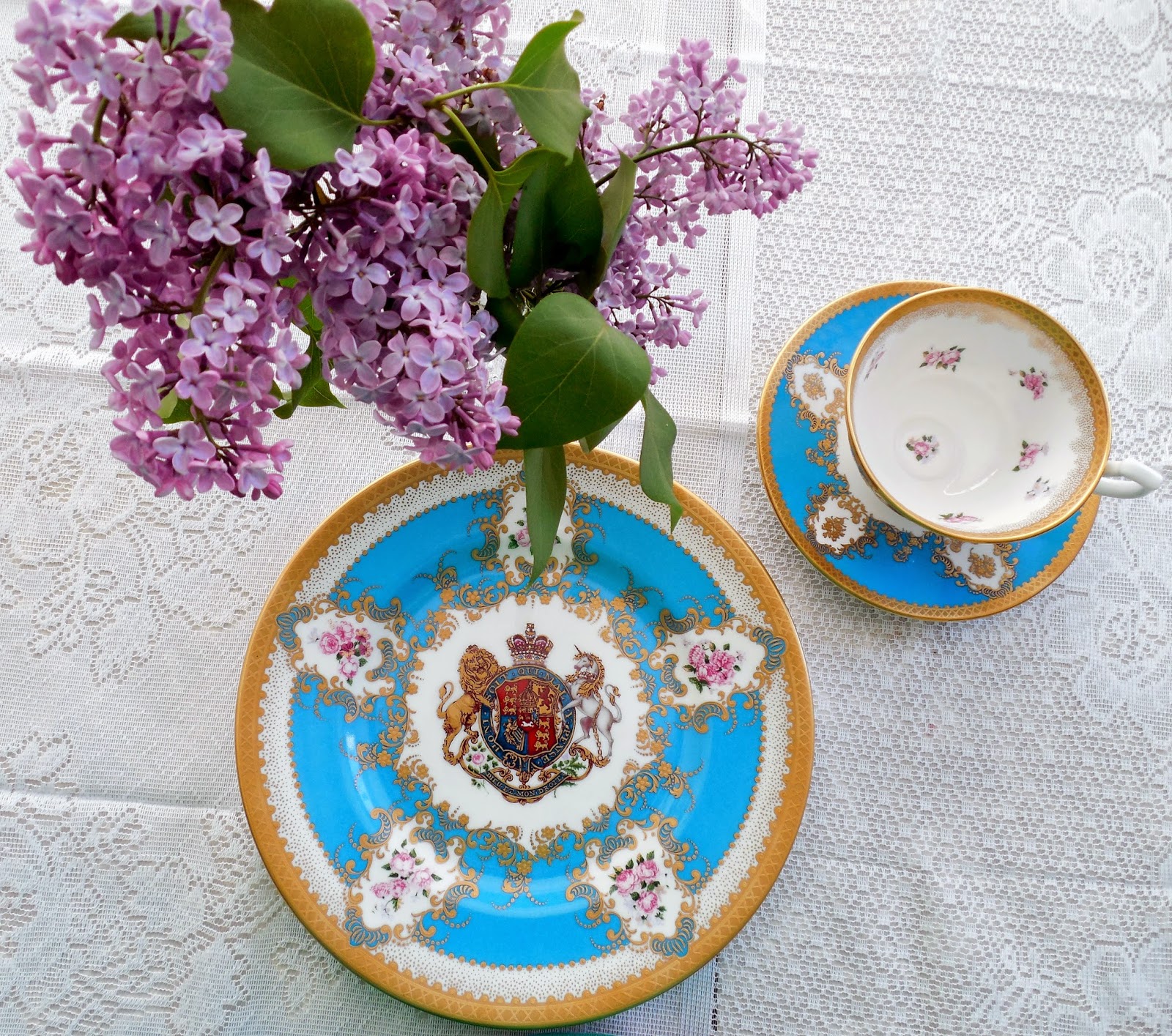 Just a quick note on the lilacs.  These lilacs are from my father's cuttings of lilac bushes from my grandparents' home (which had been the country house of my Great-great Aunt before them) in upstate New York.  The original bushes were huge and 100 years old; there was a tall hedge of them along the road that we would pass before reaching their house.
I'll leave you with one last picture from Edinburgh that supports my choice of china pattern: 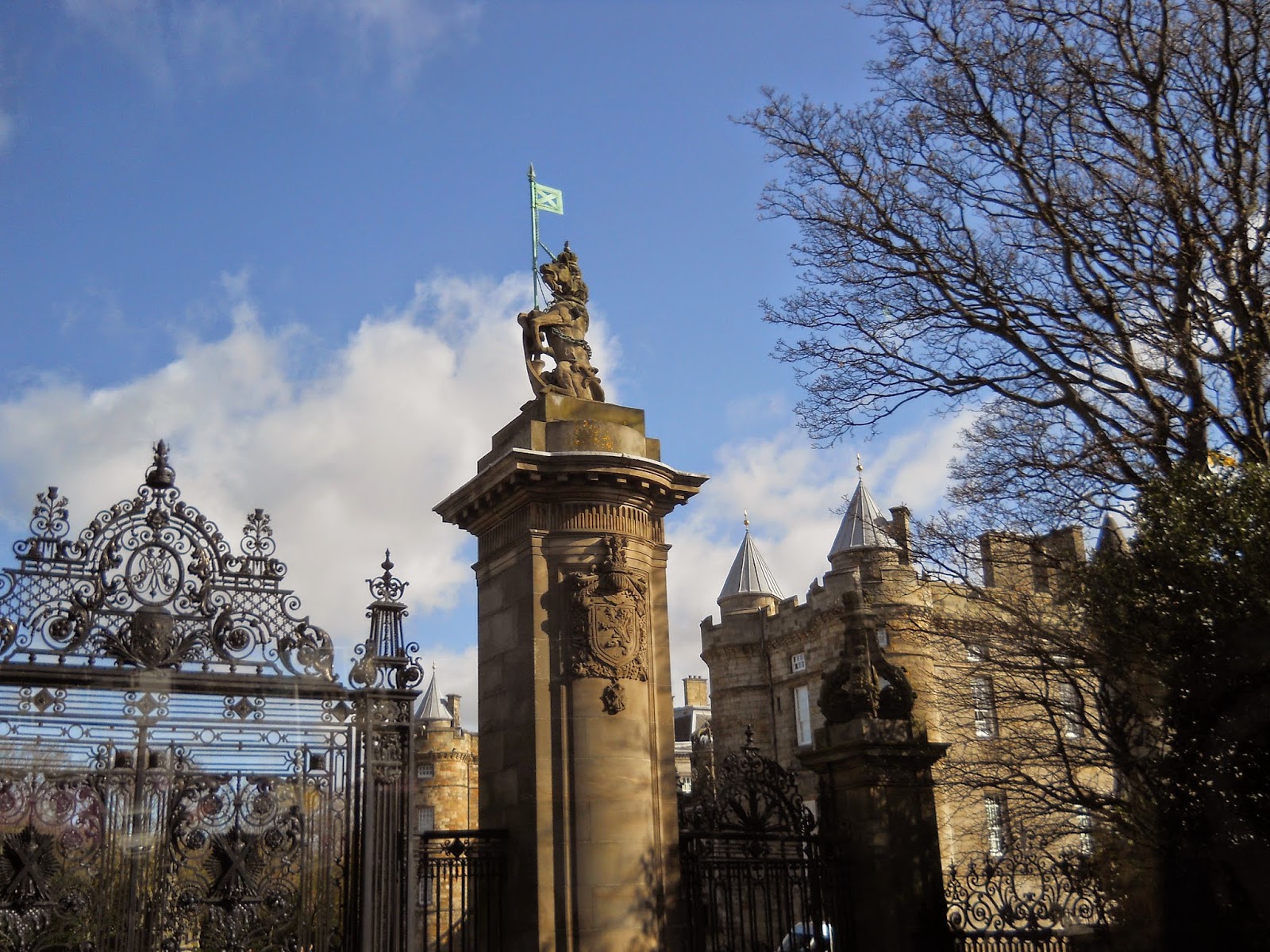 (The gate at Holyroodhouse Palace with the royal Unicorn).
Today I've joined:
Friends sharing tea at Bernideen's
and Tea Cup Tuesday at Martha's favorites﻿ and with Martha's co-host Terri
Posted by Carrie at 9:00 PM