Today's is the last post on the Southern Summer Tea Party.  Today is all about the little crafts behind the tea.

I found  cute paper double layer flowers with a button center in the cheap bins at Michaels that I knew would be perfect for the menu.  One pack included all five different colored flowers above that I could match with like colored tea sets.  I found scrapbooking paper in a pastel plaid pattern for the "frame" around the menu also at Michaels that I thought would add a bit of country summer flare.  I used a paper cutter, scrapbooking tape to tape the menu print out to the plaid backing paper,  glue dots to attach the flowers, and then had a menu!  Just a bit on glue dots--they really are the greatest things.  Aunt Becky (my aunt who also really enjoys tea) introduced them to me, and I am a huge fan now!

Also in the cheap bins were smaller flowers with just one layer that matched the flowers for the menu, so I knew they would be perfect for the little teabag favors I was planning on making.  I started by gathering all of the stuff below: 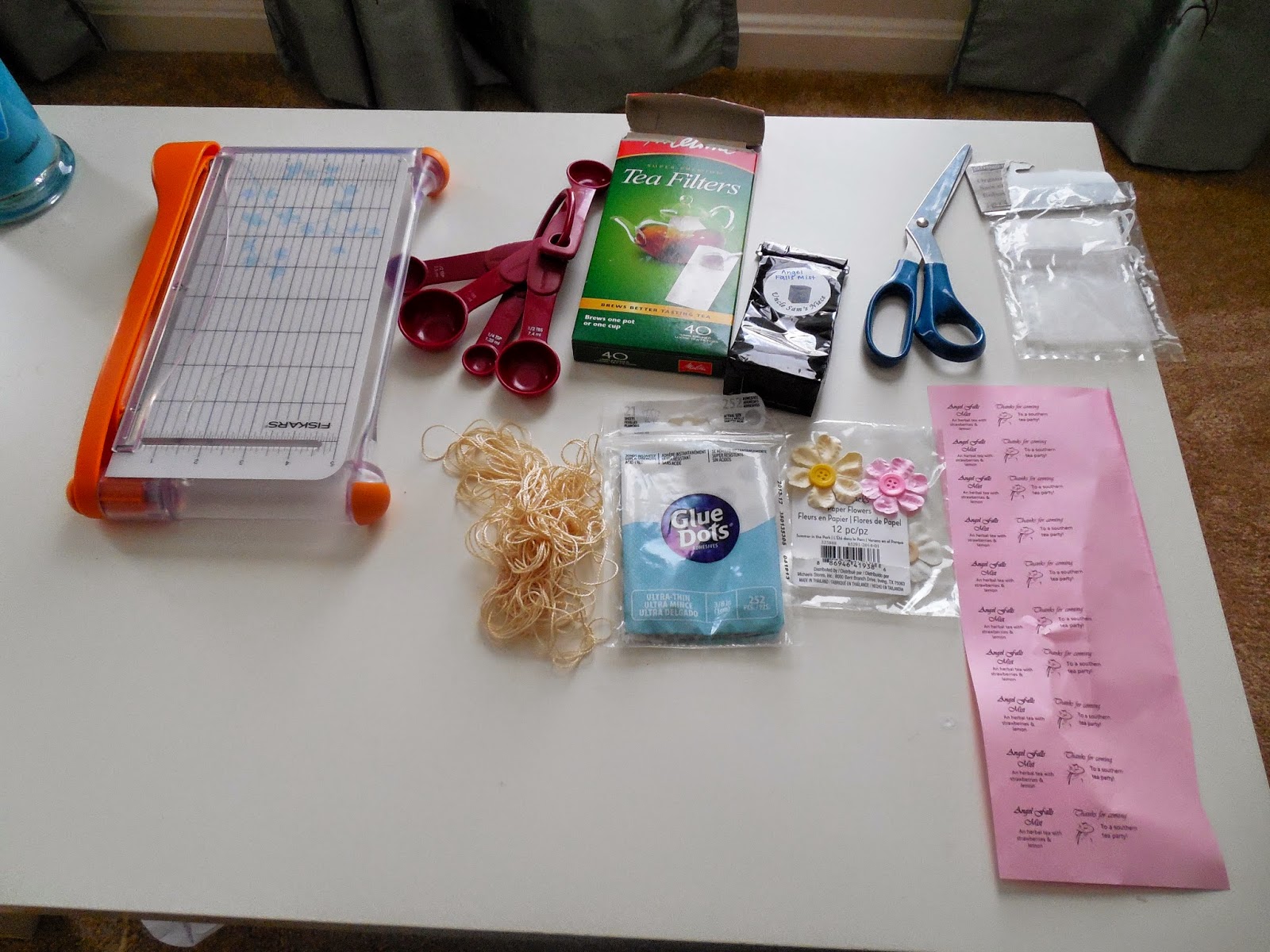 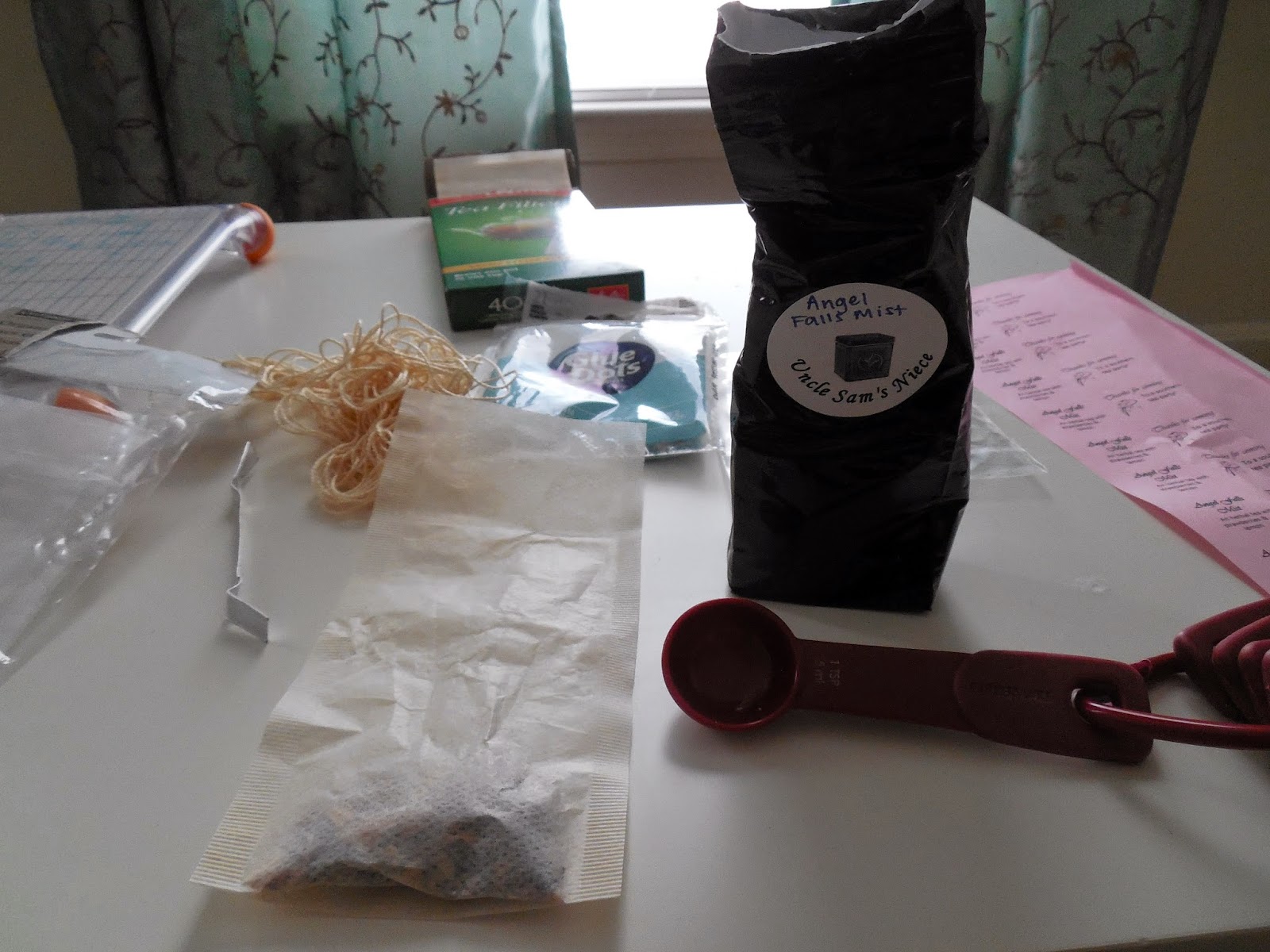 Step 2:   Pinch the bag closed with the extra paper fanning out at the top.  Cut a piece of string to the desired length taking into consideration that you will be folding the string in half.  Take the loop end of the folded string and hold it as you wrap the long side of the string around the bag.  Wrap enough times that you feel the bag would be securely closed. 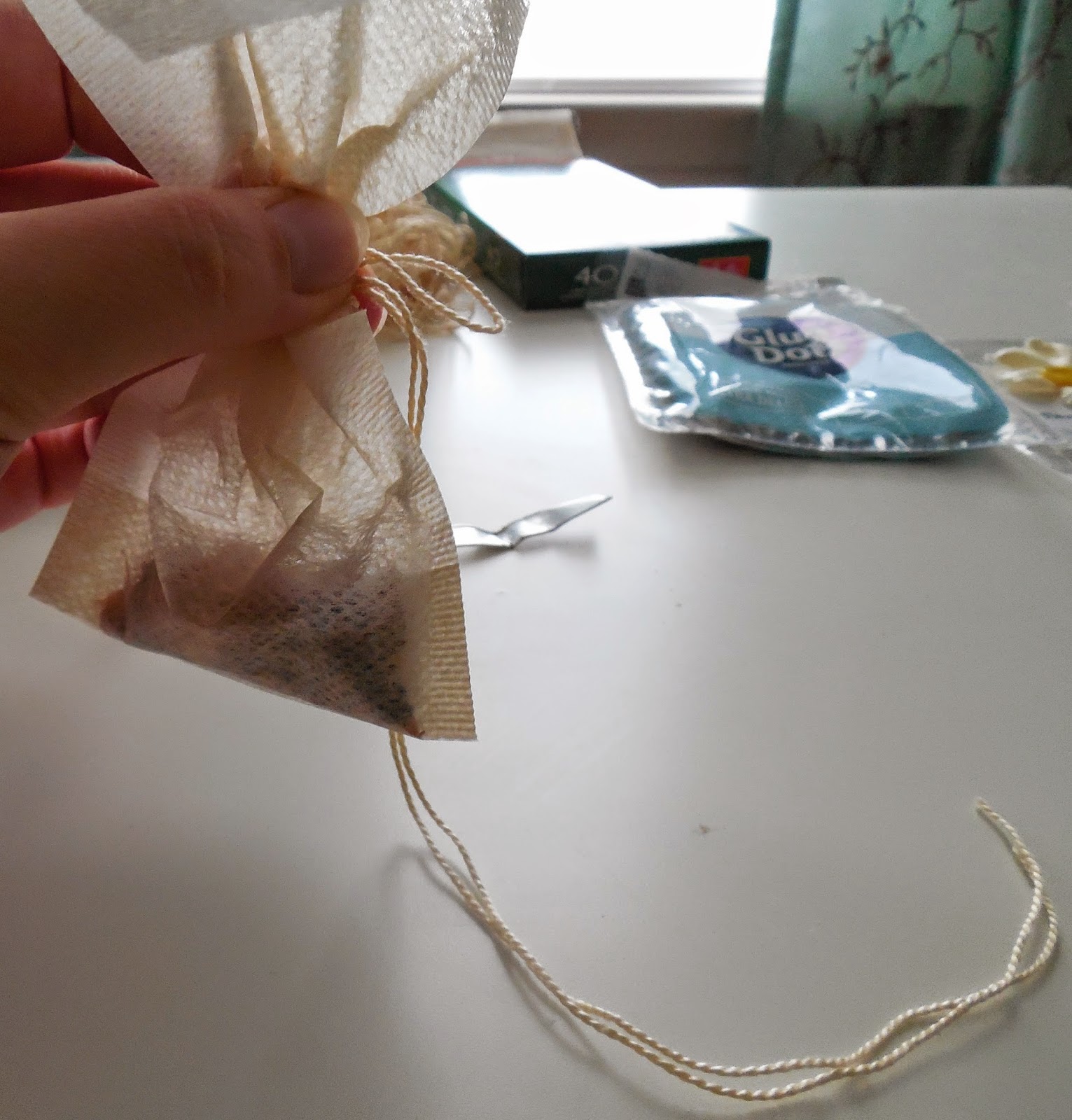 ﻿
Step 3:   Pull the long end of the string through the loop and pull tight. 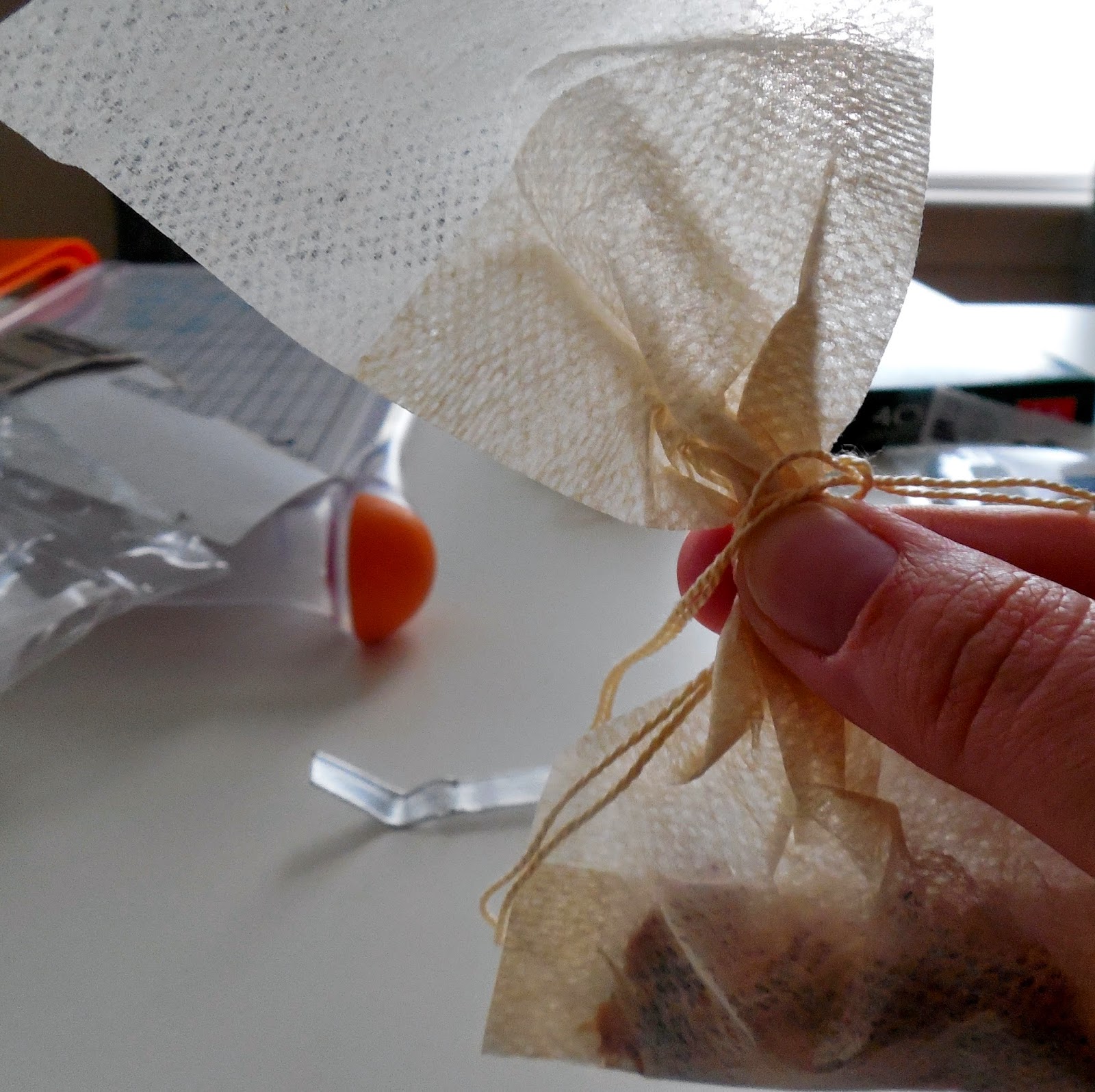 Step 4:  Cut the extra paper on the top (for me this was where the flap part of the bag began) with the scissors in a wavy pattern. 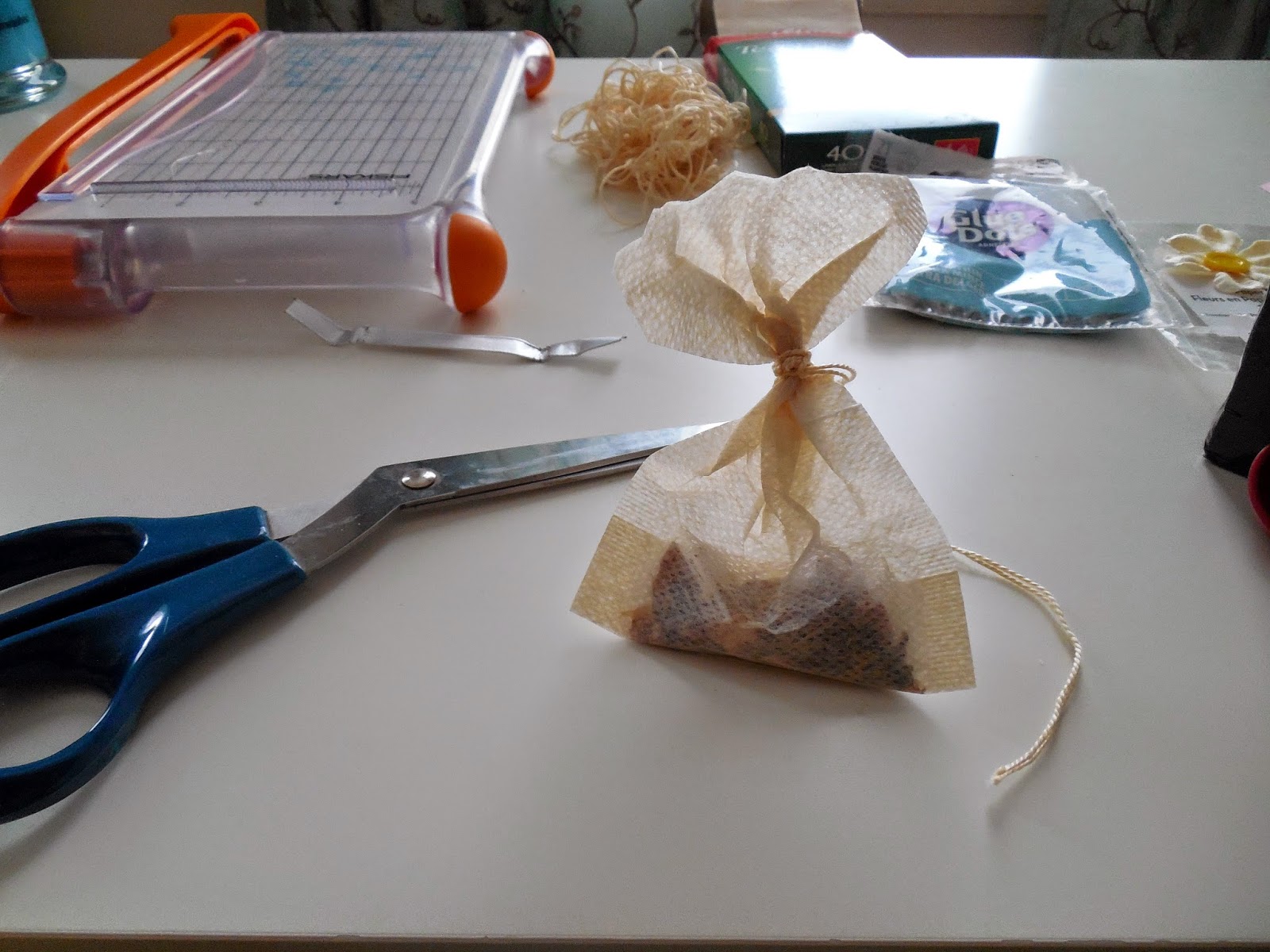 Step 5:  Place teabag in fabric favor bag with string hanging out.  Close bag.  Take one of the cut labels (this is where I had to use the paper cutter because I can't cut a straight line).  Make sure the label has two sides as shown with a fold in the middle. 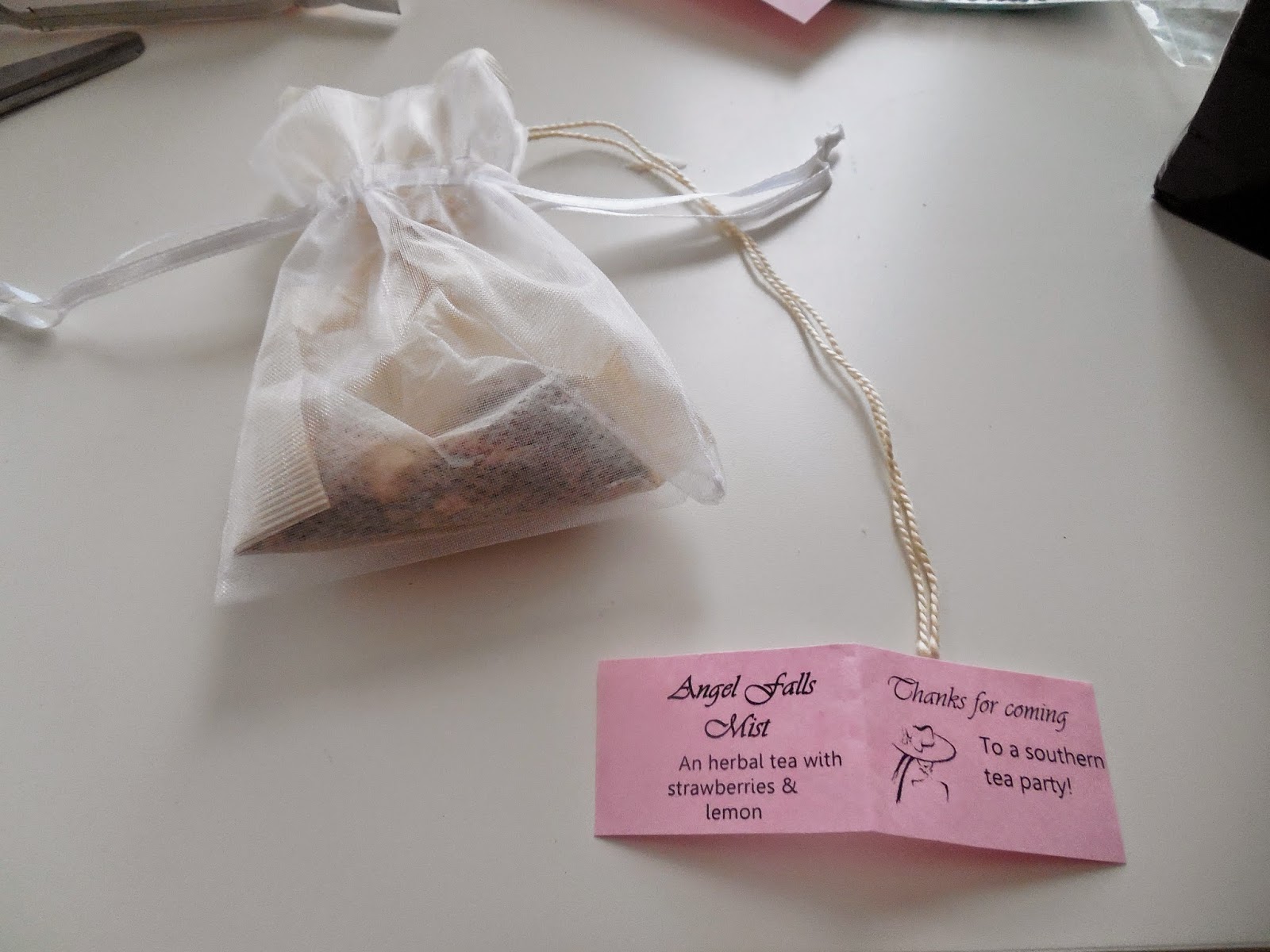 Step 6:  Turn over the label to the blank side and place a glue dot in the middle of one side.  Place string on top of the glue. 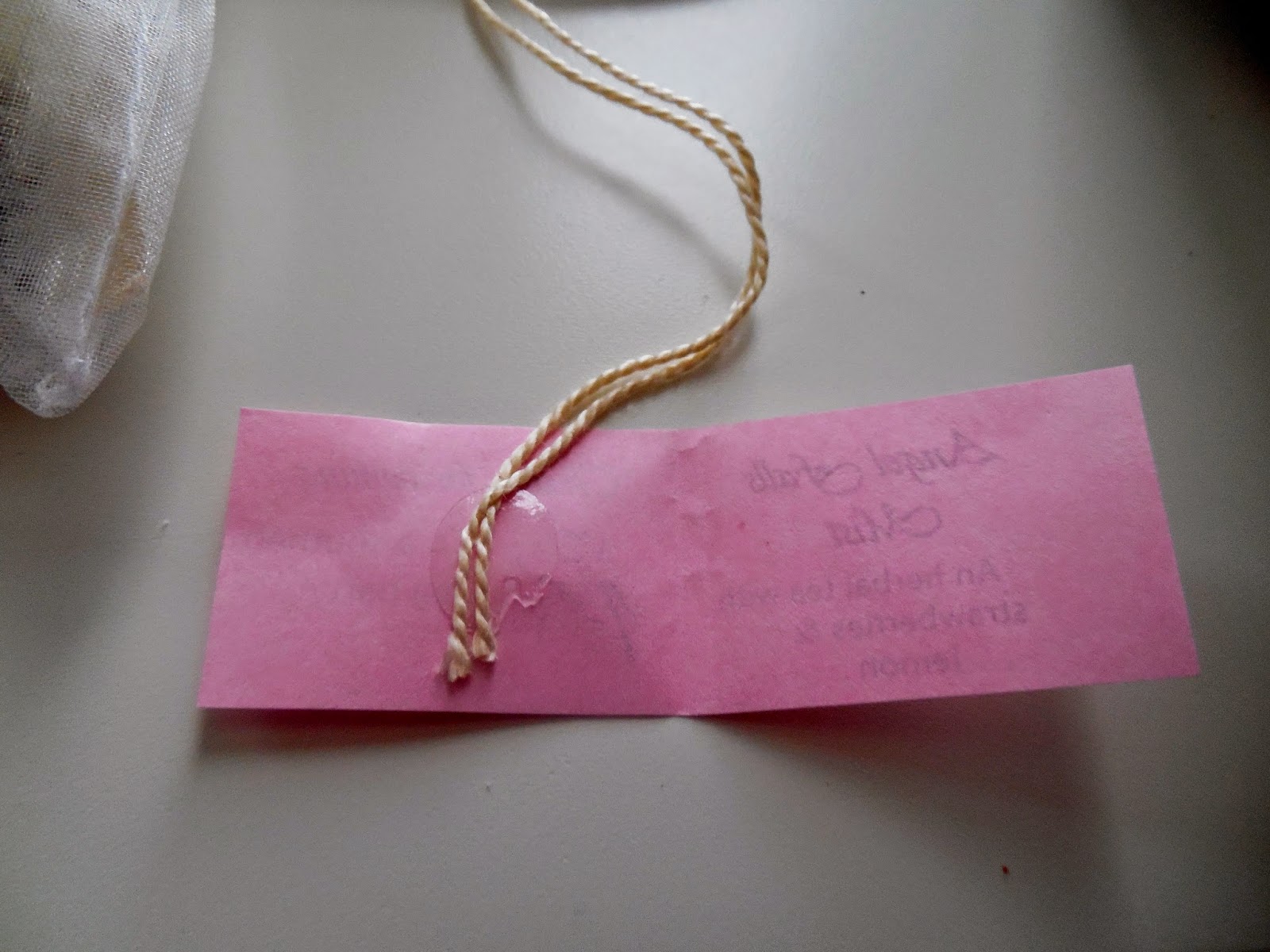 Step 7:  Fold paper over and press down, making sure glue has set.  Pull lightly on string to make sure it is also set.﻿ 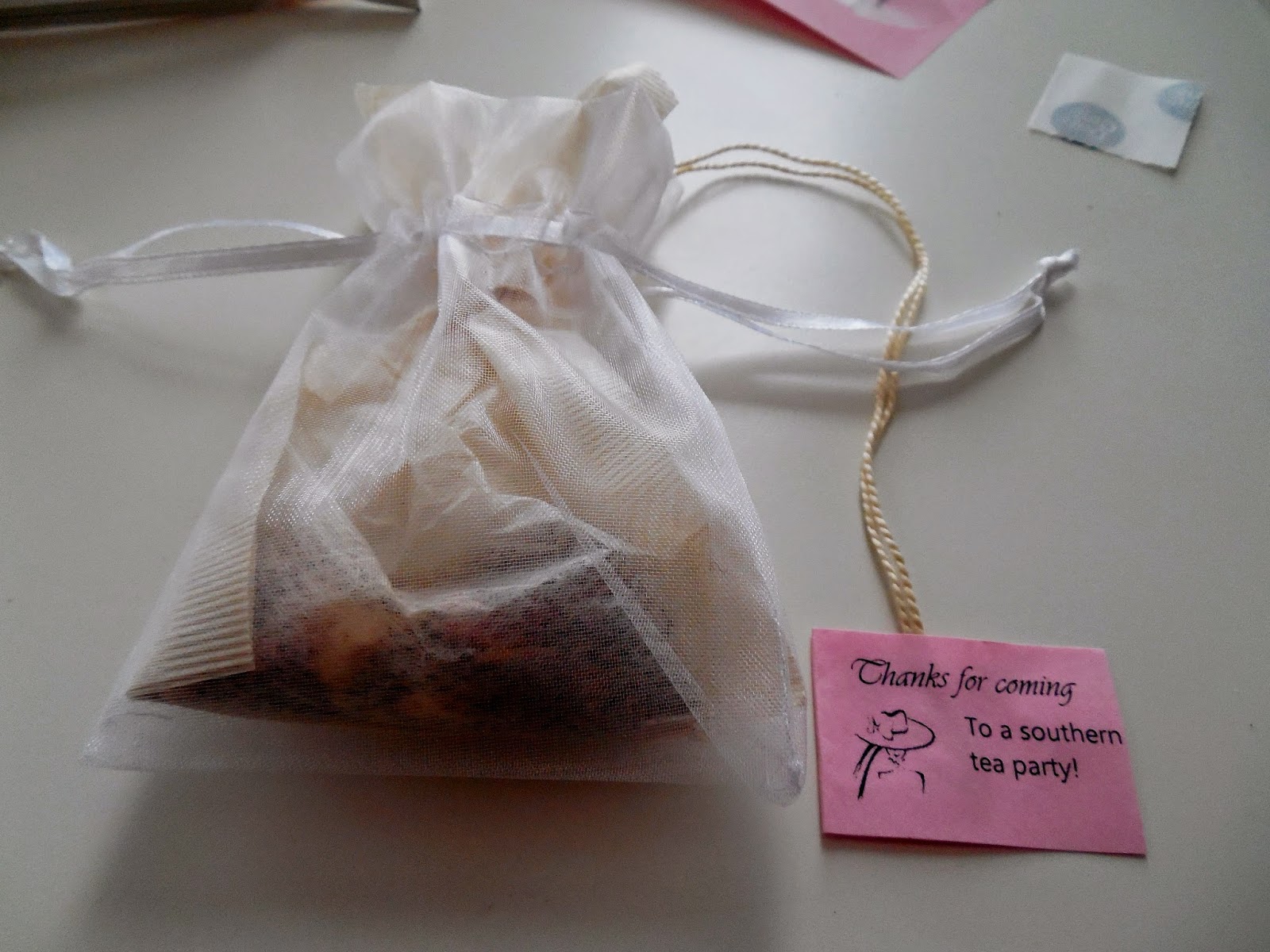 Step 8:  Put a glue dot in the center of the back of one of the paper flowers (or what ever else you are using on the bag). 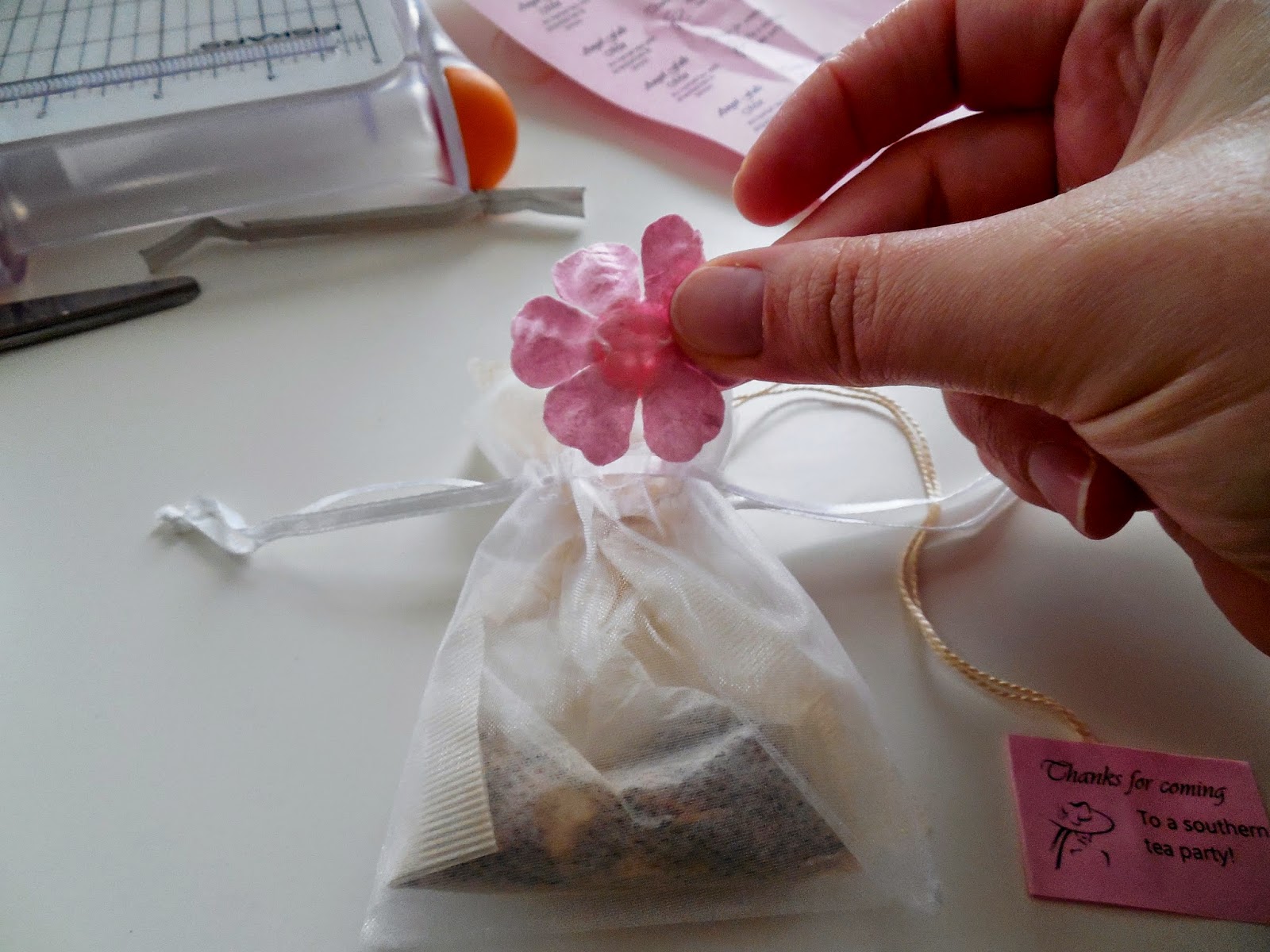 Step 9:  Press flower onto the bag in the center of the top where the bag closes and hold for three seconds to make sure it sets. 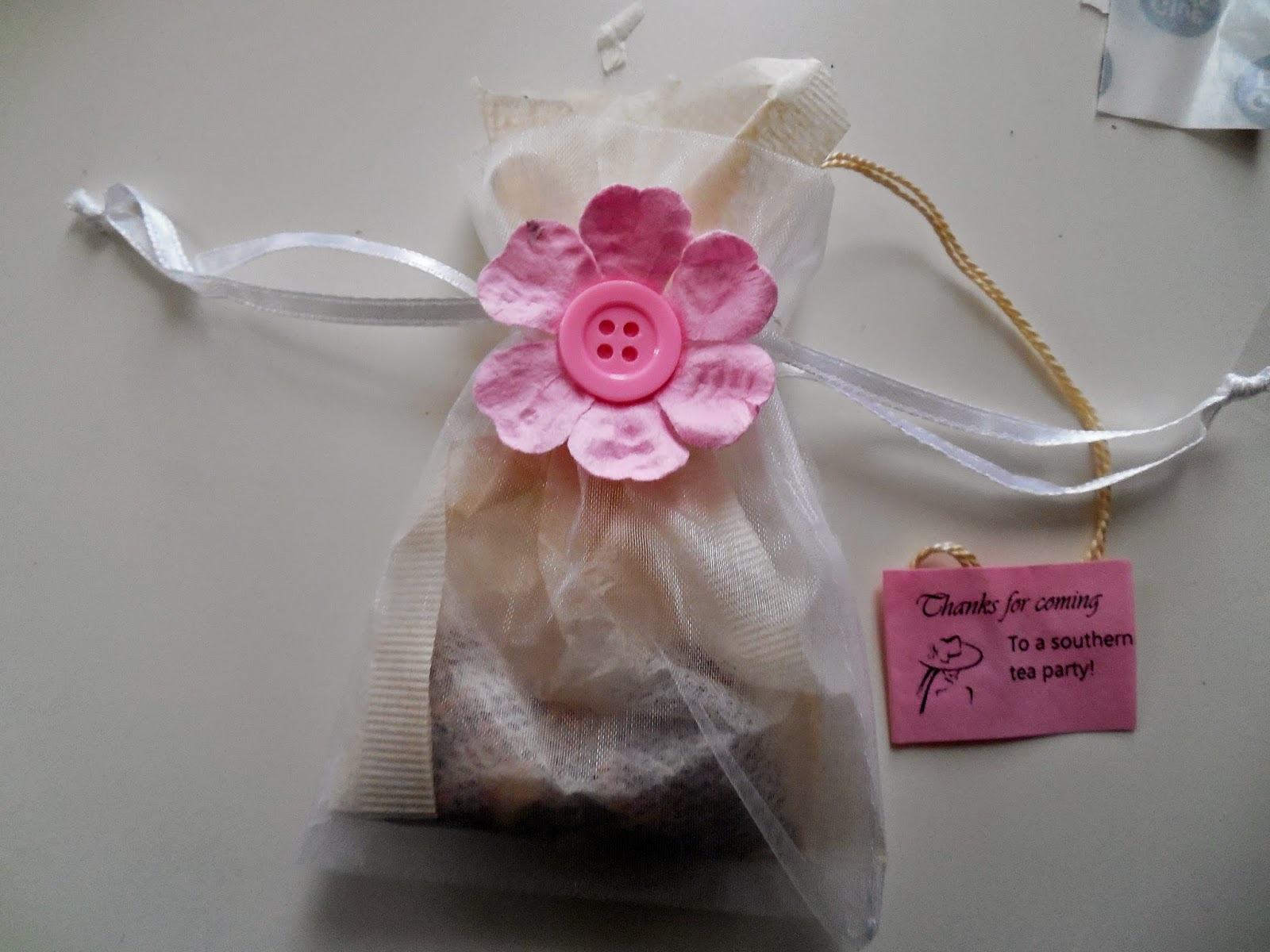 And now you're done!  Despite all the pictures and the nine steps, this was a very easy and inexpensive little favor and turned out really cute. 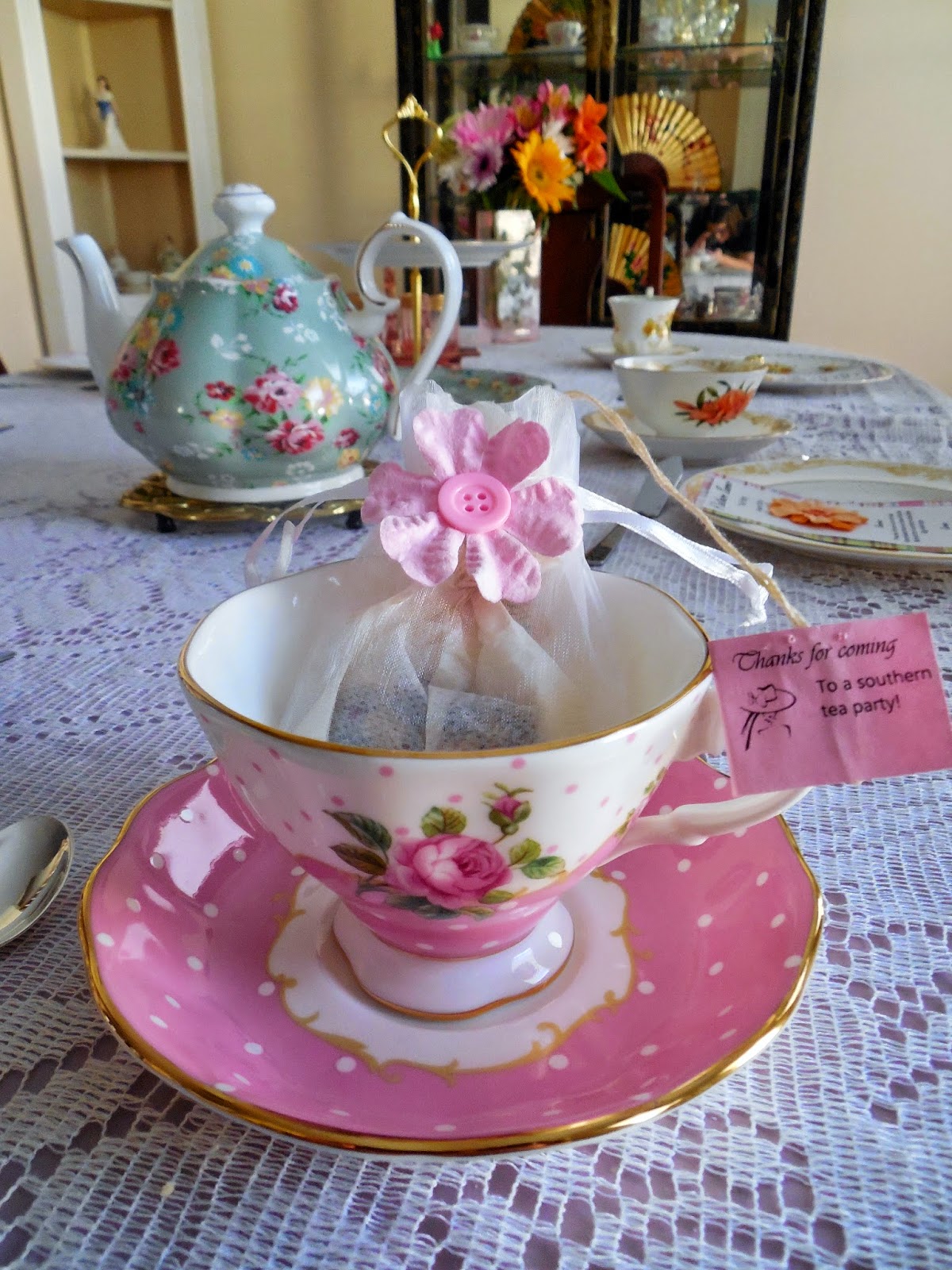 As the favor says, Thanks for coming to a southern tea party!﻿