Savories for a Wicked Tea

The tea started with a pumpkin soup, which I first tried here.  I used the recipe in the September/October issue of TeaTime Magazine.

Now onto the savories! 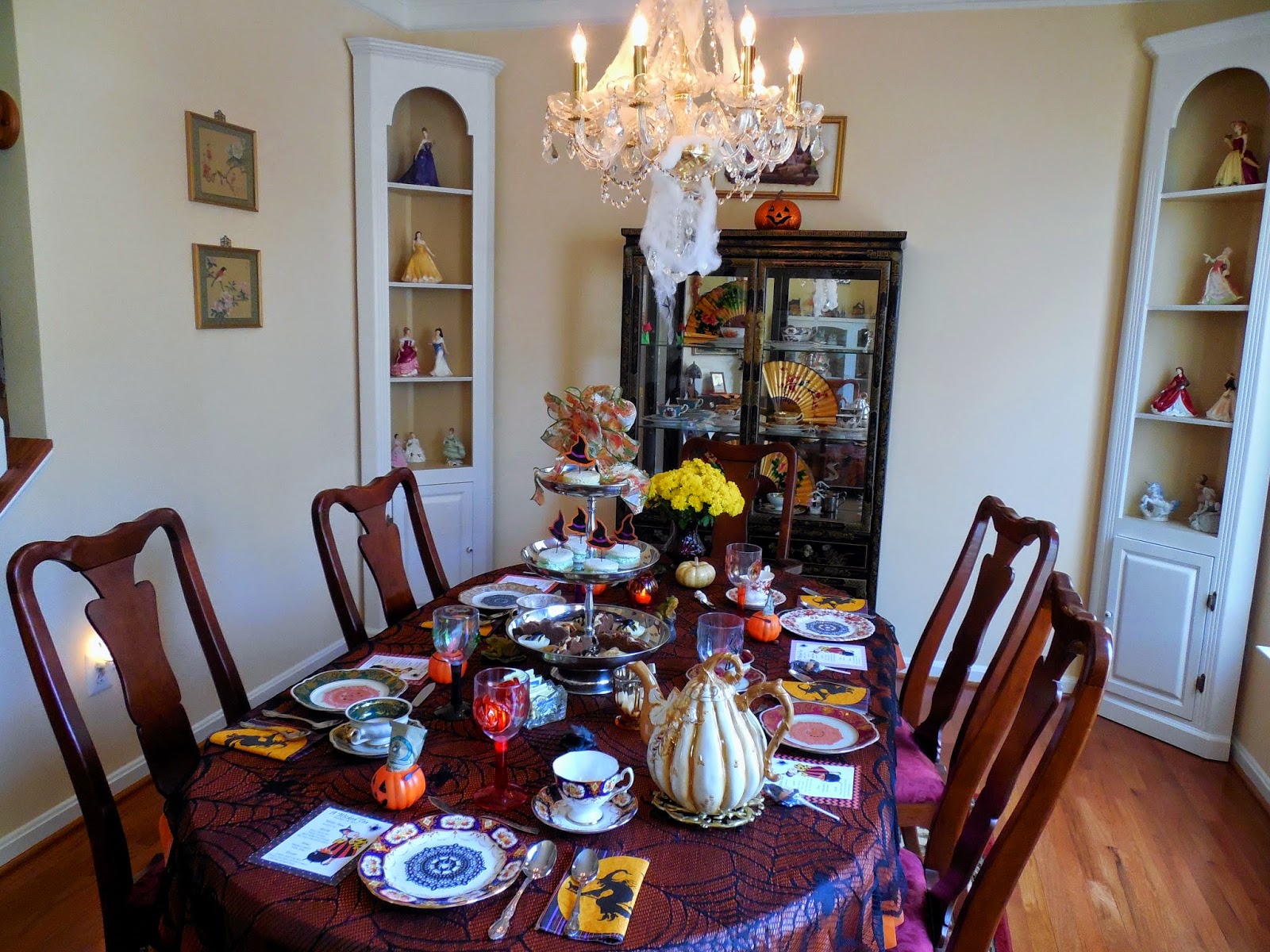 First are the pimento cheese with bat wings.  I used the same recipe that my aunt used for her cheddar pinwheels, which turned out perfectly.  I liked this recipe better than the Paula Deen one with cream cheese--this one just has mayo (with a dash of Worchester sauce).  I used a bat cookie cutter (from Homegoods!) to make the shape. 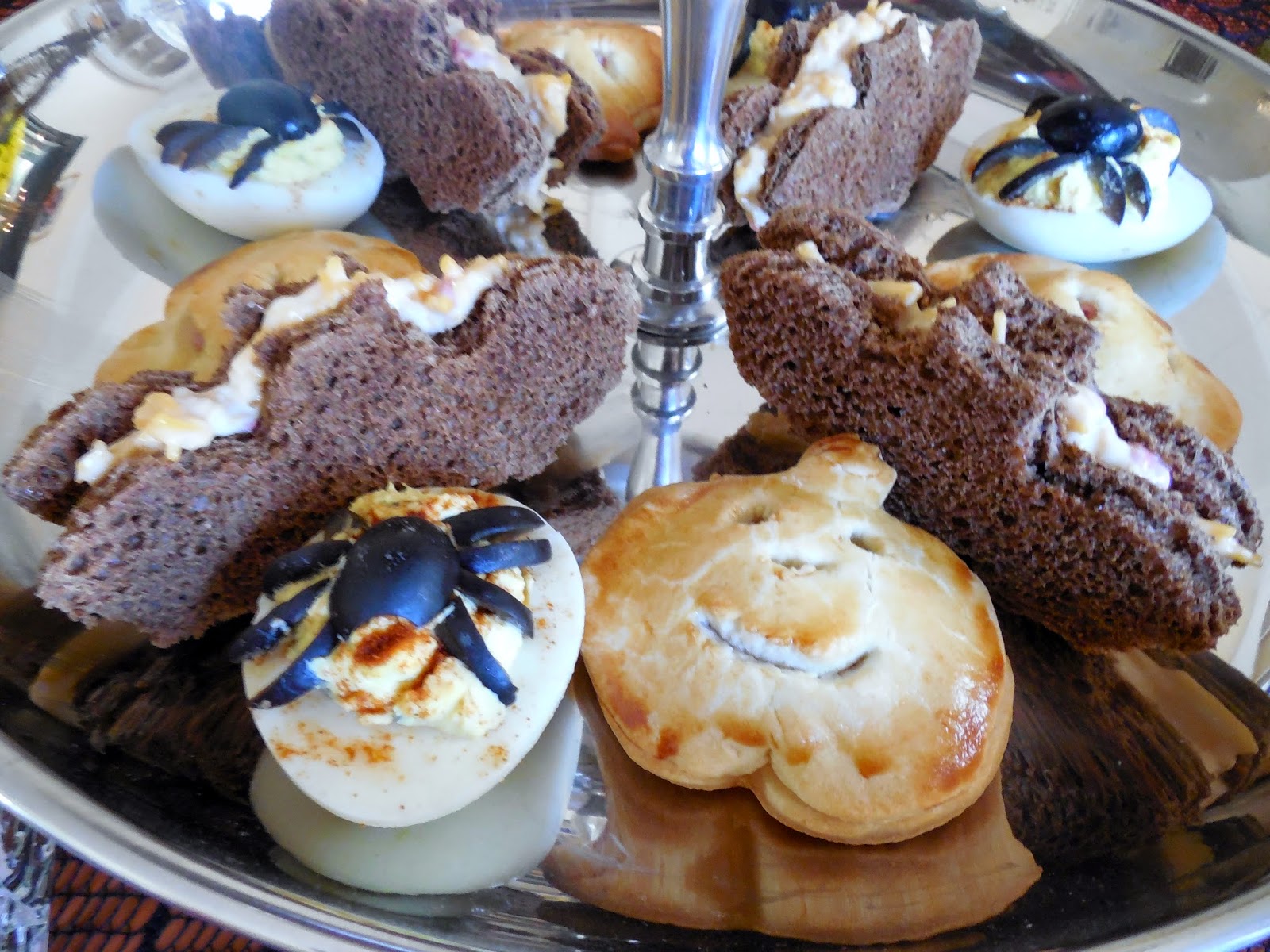 Next the spider deviled eggs: 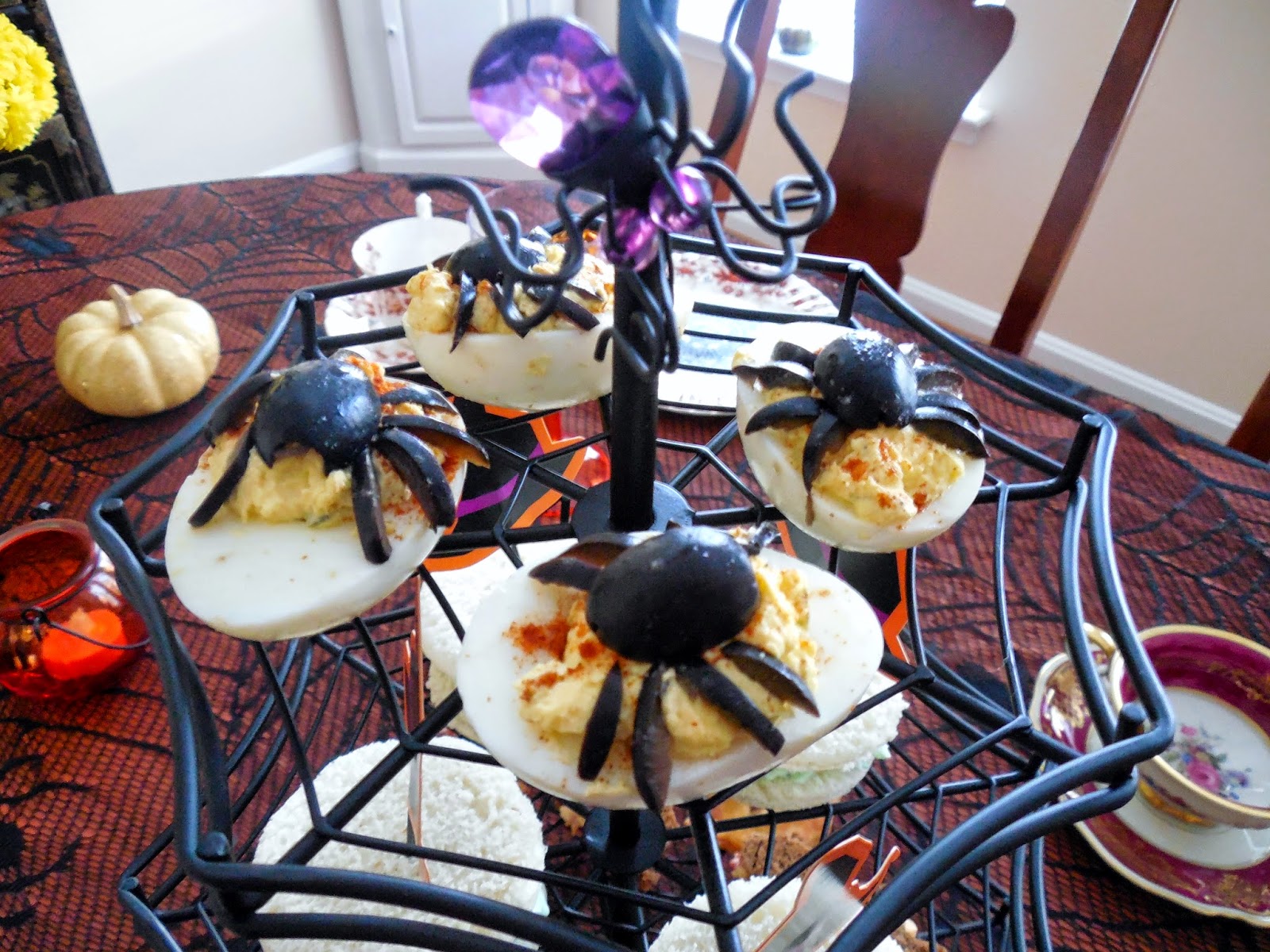 (this picture was from the "leftover" party I served to my parents to help me eat up the leftovers)
I made my normal deviled eggs (mashed egg yolk with mayo, sweet pickle, a dash of yellow mustard, and salt and pepper to taste) and topped them with paprika for a little extra color.  I then used canned medium black olives (pitted) to make the spiders.  I cut the larger olives in the can in half and placed in the middle of the egg.  The slightly smaller olives I cut in half, and then I sliced them thin in order to make the legs for the eight legged creatures.﻿
﻿
﻿
I also served "wicked cucumber" which is a Benedictine cucumber sandwich. 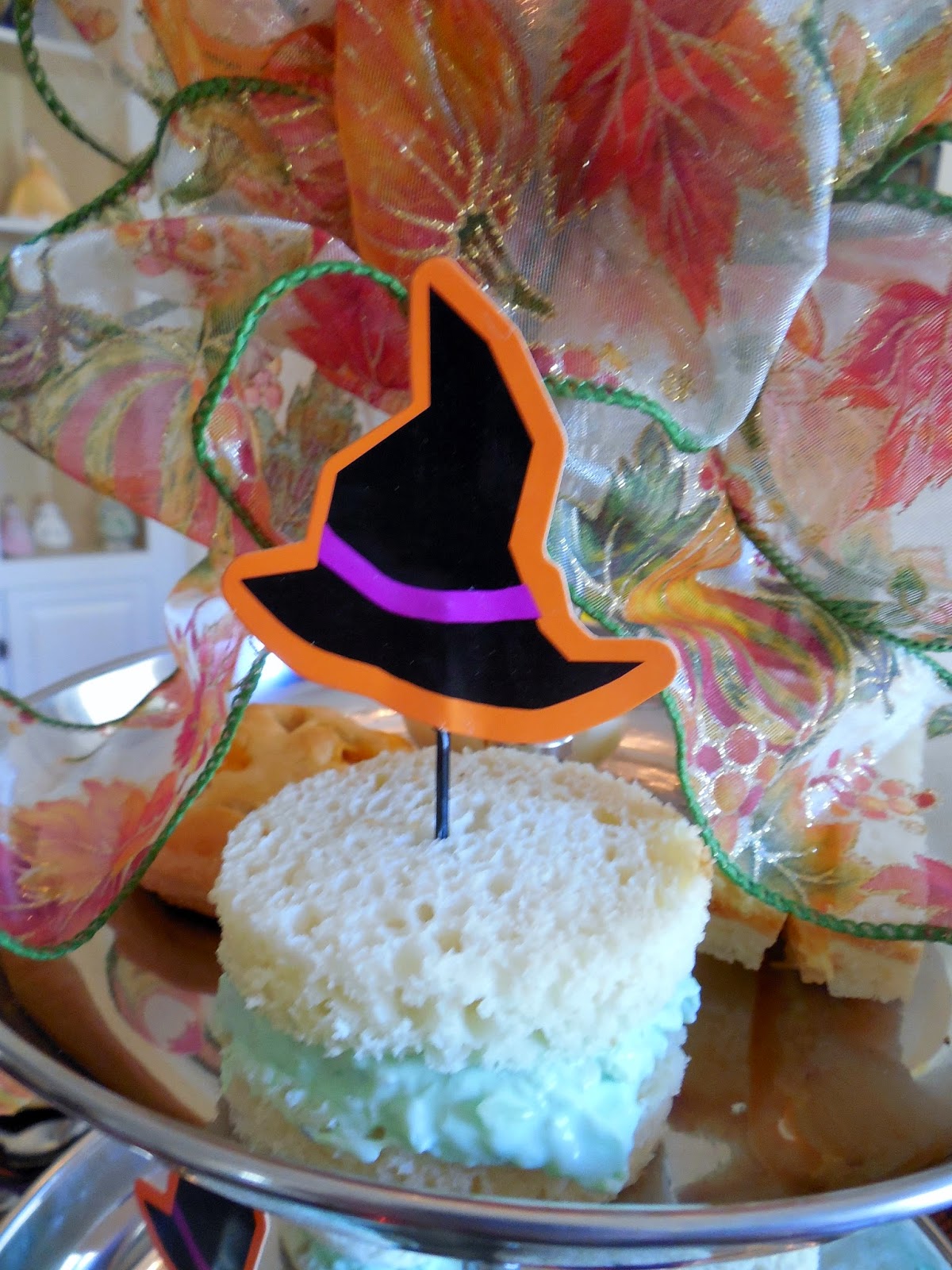 (I found the witch hat pick at the dollar store and picked up a pack--I knew I would use it for something in the party)
This time I used a recipe from Allrecipes, slightly modified.  I'll copy it here as I made it:
Benedictine Spread﻿
1 large cucumber, chopped finely (I used my chopper)
2 tablespoons finely chopped onion
﻿
1 8 oz container cream cheese, softened
1/2 teaspoon dill
4 drops green dye (to make it extra green for this Halloween tea)

Now onto my favorite sandwich for this tea--a pumpkin shaped pie. 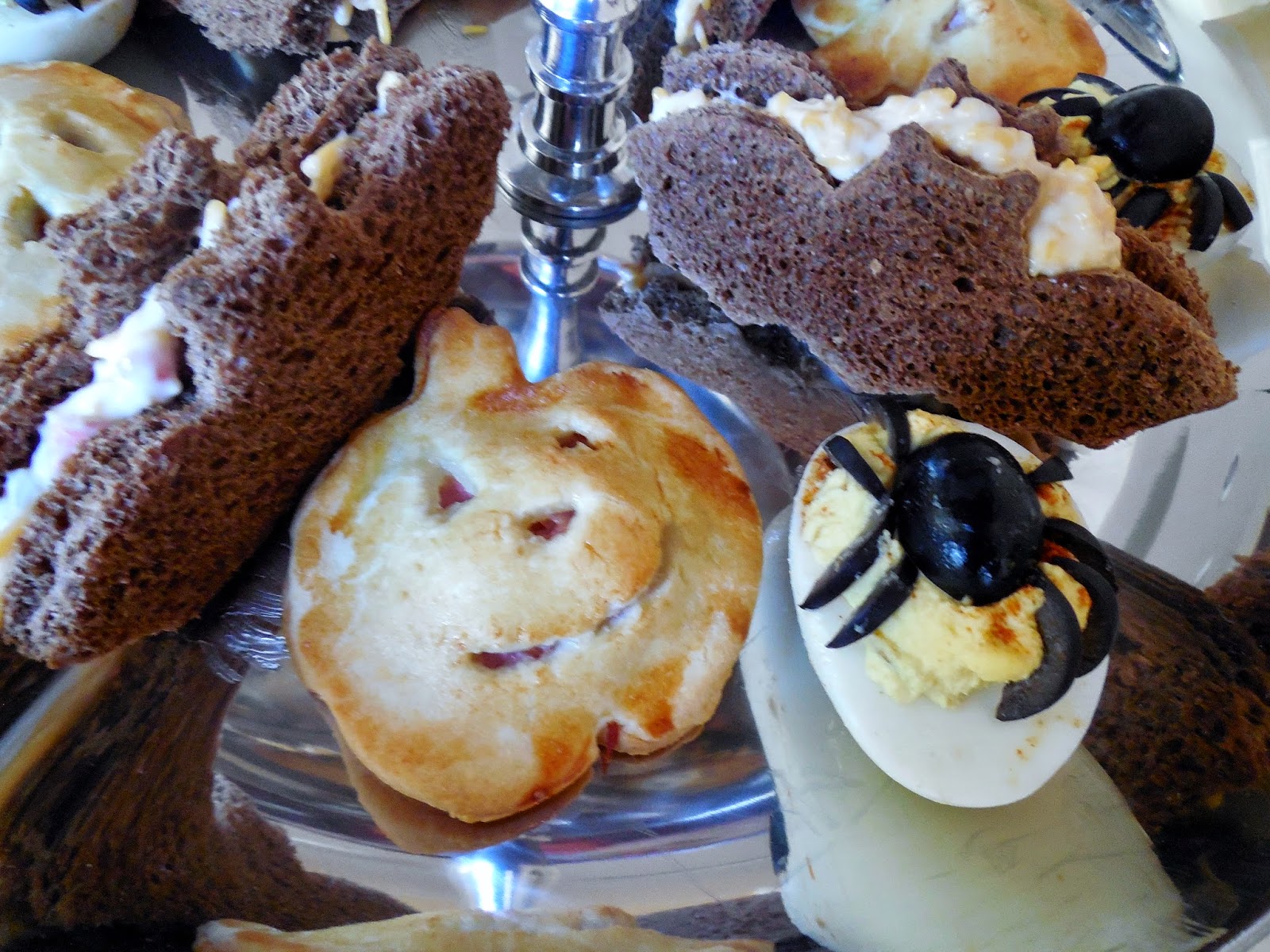 I found the recipe for this pie (that uses refrigerated pie crust, by the way and a pumpkin cookie cutter), on Woman's Day Magazine's cite here.   I just used a knife to cut out triangles for the eyes and nose and cut a slit in the shape of a smile for the mouth.