Welcome!  I'm so glad you join me today at Historic Aldie Mill in Loudoun County, Virginia.  This two hundred year old gristmill was built between 1807 and 1809 by William Cooke under an indenture contract with Charles F. Mercer, a lawyer, Virginia legislator (including to the House of Representatives), and military officer.  Mercer had built a house for himself across the street from the plot where he had obtained the right to build a mill, and called his home Aldie Manor after Aldie Castle in Scotland (to celebrate his Scots heritage).  The small town that grew up around the mill also took the name Aldie. 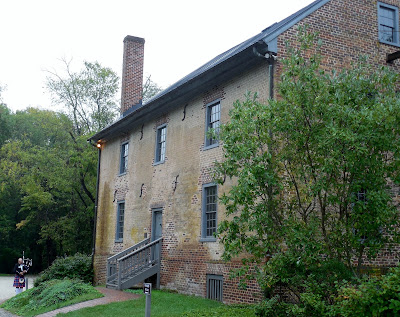 Now my visit wasn't to get my grain ground for flour, but to attend an Outlander Scottish themed tea party!  I was very excited about this tea and its program--I can definitely say this is my first time having tea in a 200 year old mill!  When we walked up to the mill we were greeted by a bagpiper, which was a fun surprise.

Tea was in the first flour of the mill. 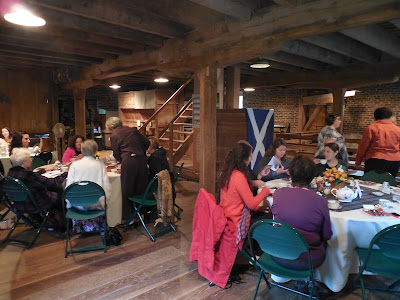 Unfortunately for blogging purposes, when I walked inside the building most of the guests had already arrived, so I could not get a good picture of the entire table until after the tea had finished, but even in the aftermath you can see the plaid centerpieces and remaining plaid napkins and the mum centerpiece. 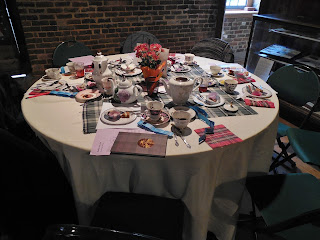 Now, just a bit on Outlander.  Outlander is a series of books by Diana Gabaldon about an English WWII nurse (Claire Randall/Fraser)who traveled back in time to 18th century Scotland, where she meets and falls in love with Jamie Fraser (see below...yum!).  There is currently a TV series based on these books on Starz. 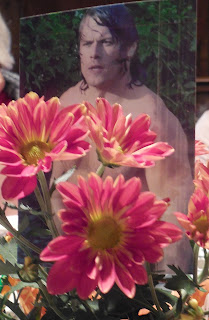 Anyway...tea!  Below was my pretty teacup with a picture of a lady inside.  Surprisingly, I forgot to turn it over like I normally compulsively do to see who made it. 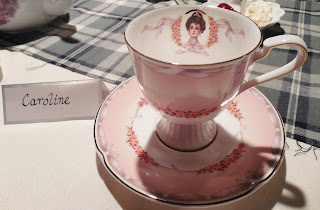 We were served two teas from a local tea blender, Dominion Tea, in Purcellville, Virginia.  I actually hadn't heard of them before--I guess a road trip is in order to their Tasting room!  One tea was Highland Maple (delicious!) and the other a Ceylon. 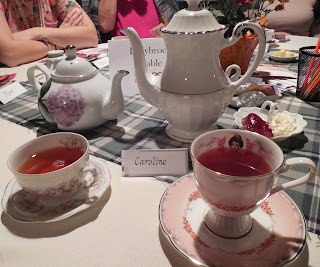 Next, the food.  First we were served, Mrs. Fitz's Cranberry Scones on tartan plates.  (Mrs. Fitz is the housekeeper of Castle Leoch in the Outlander series, where Claire and Jaime lived when Claire first traveled back in time). 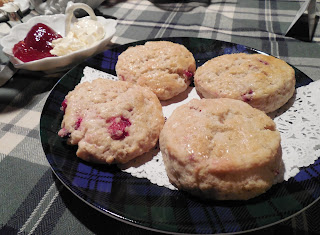 In between courses, we played a trivia game, all based on Outlander of course.  I have only seen most of the first season, so I didn't even bother, but my aunt ended up winning the game!  After scones and a few trivia questions, out came the tiered tray: 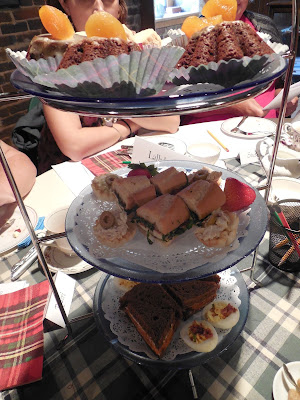 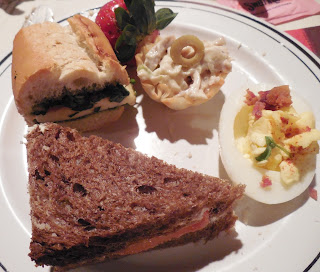 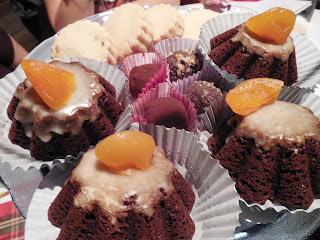 And then our second dessert course--Claire Fraser's pumpkin & spice bread. 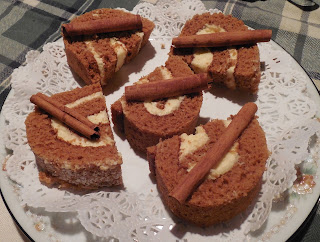 Now that we were fed, the next part of the program started--a presentation about conflicts between the Scots and English in the 1700s, starting with a brief history of the Stuart monarchs, the Jacobite uprising, and culminating in the Battle of Culloden in 1746, all of which was an important part of the Outlander series. 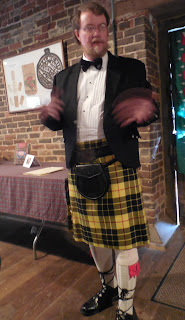 I'm a big history fan, so I enjoyed this presentation, and it even stirred some long forgotten facts learned when I took a class in Stuart England in college.  He even mentioned a connection with Virginia--at the time a big colonial trade partner with Glasgow.  There was also a shout out to William and Mary (where I went to college), so I was sold :).

But we weren't done!  We went to the upper level of the mill, where the Aldie Horticultural society had set out a large selection of flowers so we could make bouquets. 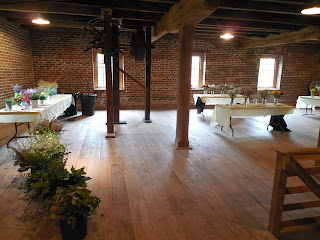 First a presentation on arranging 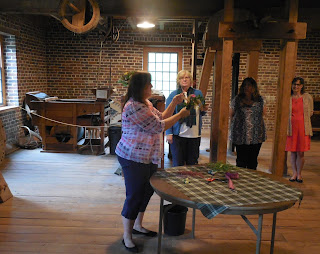 Then on to the flowers. 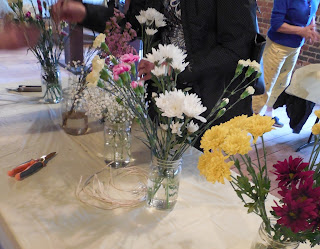 There was a huge assortment of flowers and other random clippings, from leaves to berries to wildflowers.   There were also herbs (like rosemary) to add for scent, as well as dried lavender.  We were meant to feel like we had wandered into the hills of Scotland, collecting random flora. 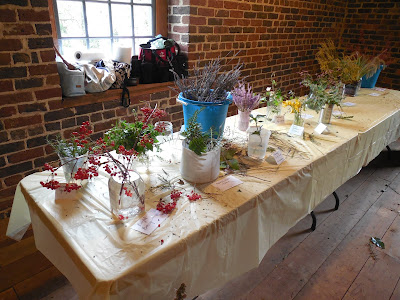 After a quick stop at the ribbon station to pick a pattern to wrap around the edge  of my bouquet, 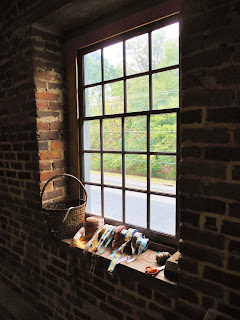 I had my own Highland bouquet (with Virginia wildflowers). 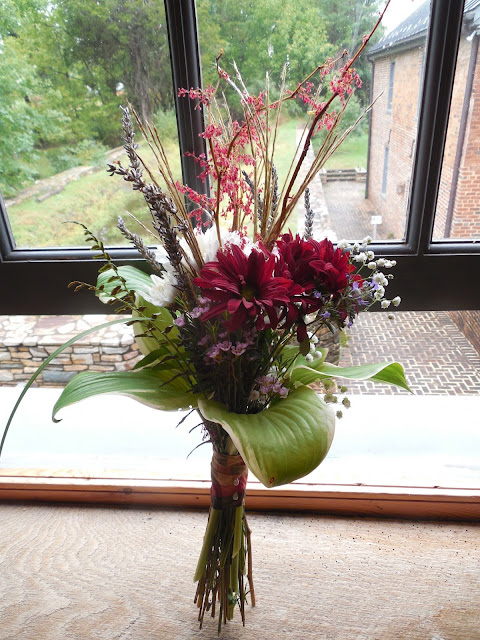 A few more pictures of the mill: 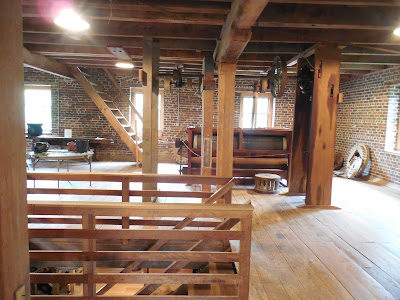 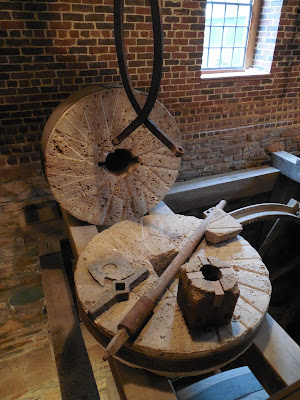 The mill was continuously operated from 1809 through six generations of William Cooke's family.  Below are different Aldie Mills labels. 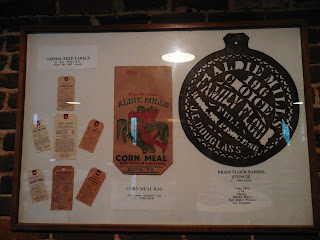 The mill was restored in the 1980s, and is now one of the best preserved mills in Virginia--and it is still a working mill!  Here is one last picture of the water wheels: 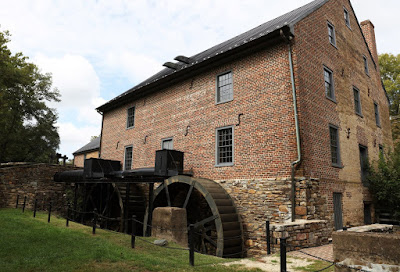 (picture from the Historic Aldie mill website, it was a bit yucky out, so I did not walk around to the back of the building).

You could really tell the organizers went above and beyond with this tea and all the effort they put into making it so much fun.