Olympic Weekend--Part 2, Join me for Chai in Russia

Russians don't brew tea (or chai as it is called in Russia) the same way we do here in the U.S., which follows the British mode.  Traditionally in Russia, tea was brewed using a samovar.  This is a samovar with a teapot on top: 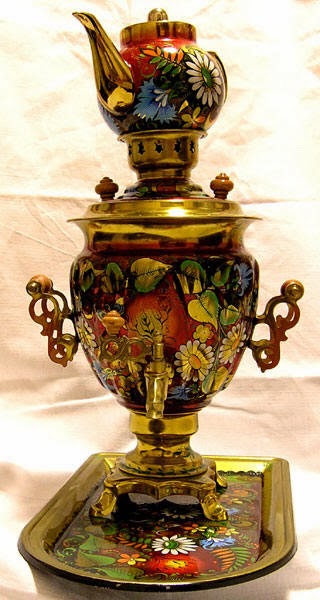 The samovar is a kettle-like urn that includes its own heating element inside.  Antique samovars may use coal to heat the water.  While modern Russians more commonly heat water just in an electric kettle, the samovar remains an iconic image of Russian hospitality and culture.  Below is a painting by Russian painter Boris Mikhaylovich Kustodiev (Бори́с Миха́йлович Кусто́диев) (1878-1927) painted in 1920 called the Merchant's Wife on Balcony, with the samovar: 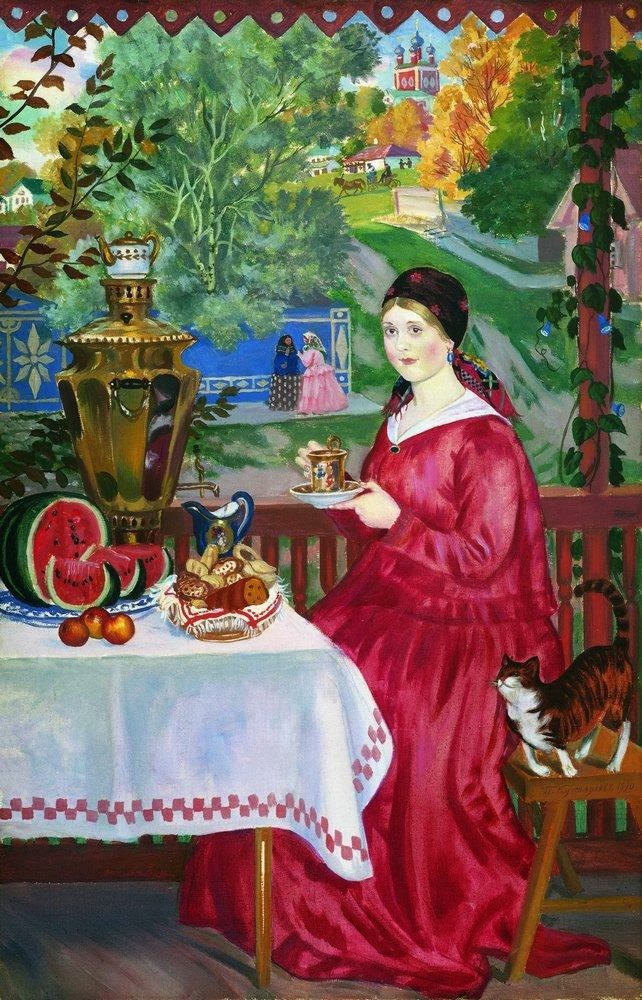 In the teapot on top of the samovar is a tea concentrate called zavarka (заварка).  This tea may be green or black, but is typically black.  The zavarka is poured into cups, but is then diluted with the water from the samovar, and would be available for use all day.

Tea blends that are considered quintessentially Russian have a smoked taste, reminiscent of the early days of Russian tea trade, when caravans would travel over 11,000 miles to bring tea from China and the smoke from the caravan fires would seep into the tea.  These teas are often called "Russian Caravan" teas.  Tea was first introduced to Russia in the mid-1600s, when a Mongolian ruler made a gift of several chests of tea to Tsar Mikhail Fyodorovich Romanov (the first Romanov tsar).  At first tea was a luxury for the very rich, but prices started to come down in the 1700s as treaties were made with the Chinese.   By 1900, when the Trans-Siberian Railroad was complete, tea could travel by train, eventually reducing prices even further and making tea readily available during the Soviet years.

After diluting the zavarka with water from the samovar, Russians may sweeten it with sugar, or by stirring a spoonful of jam in the tea.  It also may also be served with lemon.  It is less common for tea to be served with milk in Russia.  Tea is served all day long, and tea is one of the top beverages in Russia (with vodka being the other). 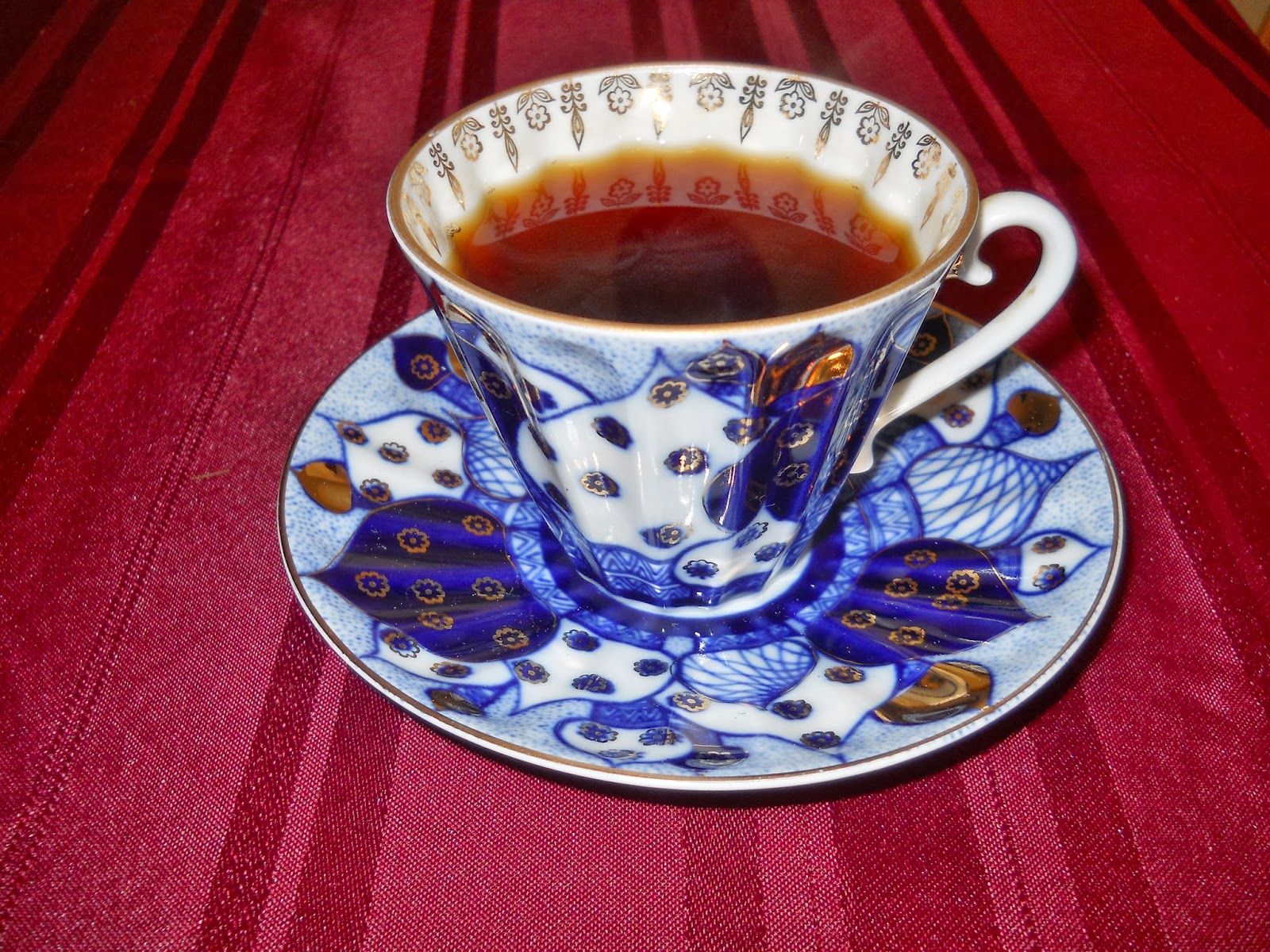 Before my visit to Hillwood, I had never even considered Russian porcelain.  After that visit, however, I began seeing it everywhere on the internet as well as in the Blue and White edition of Tea Time Magazine from last June 2013.  A couple of months later, I walked into a local consignment store and finally saw in person a collection of five different patterns of Lomonosov china.  According to Wikipedia, Lomonosov china is the modern descendent of the Imperial Porcelain Factory!  I decided on the pattern in the picture below, Russian Domes.  I loved it over even the more well known Blue Net Lomonosov pattern, because it reminds me of St. Basil's domes. 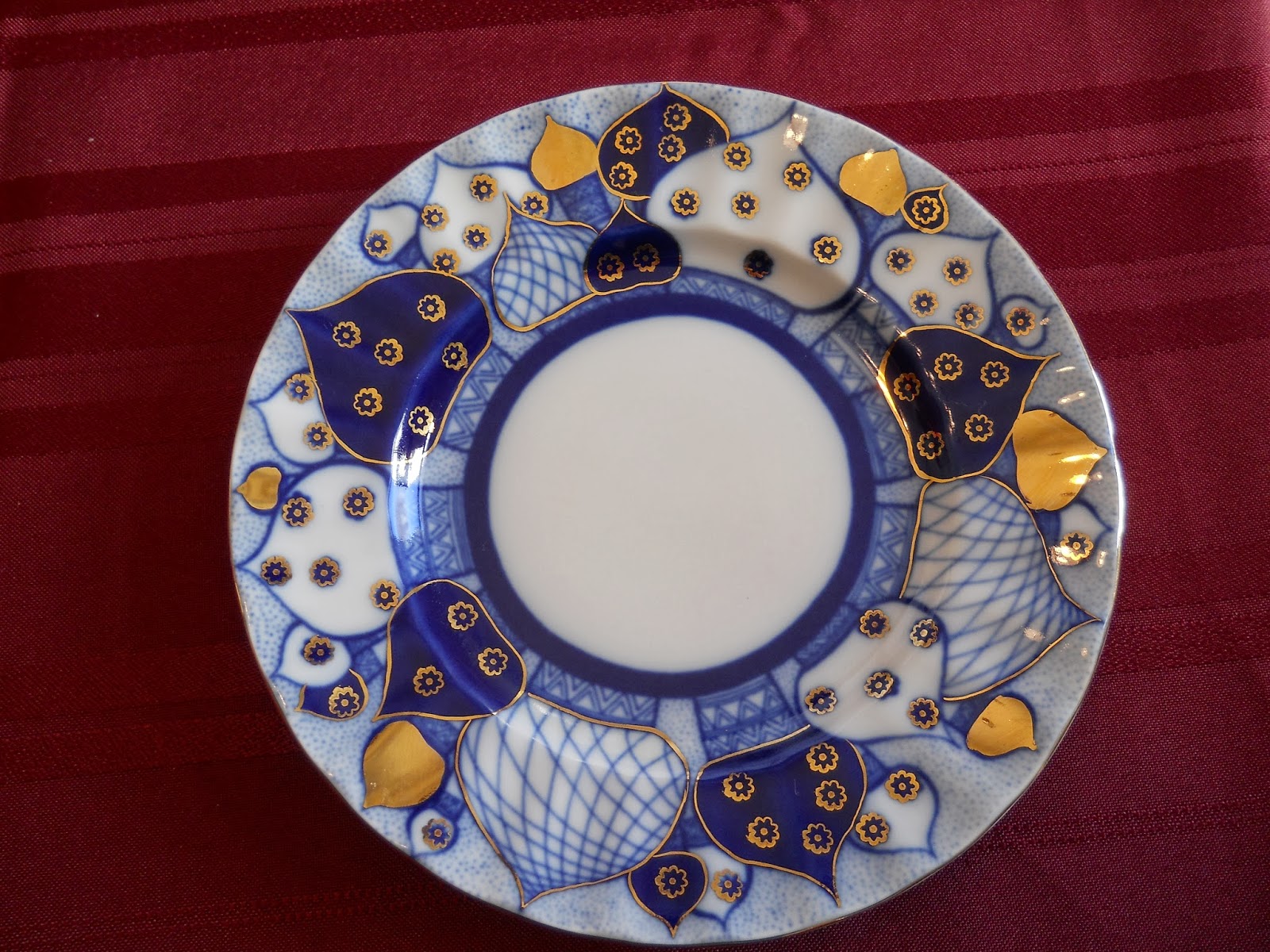 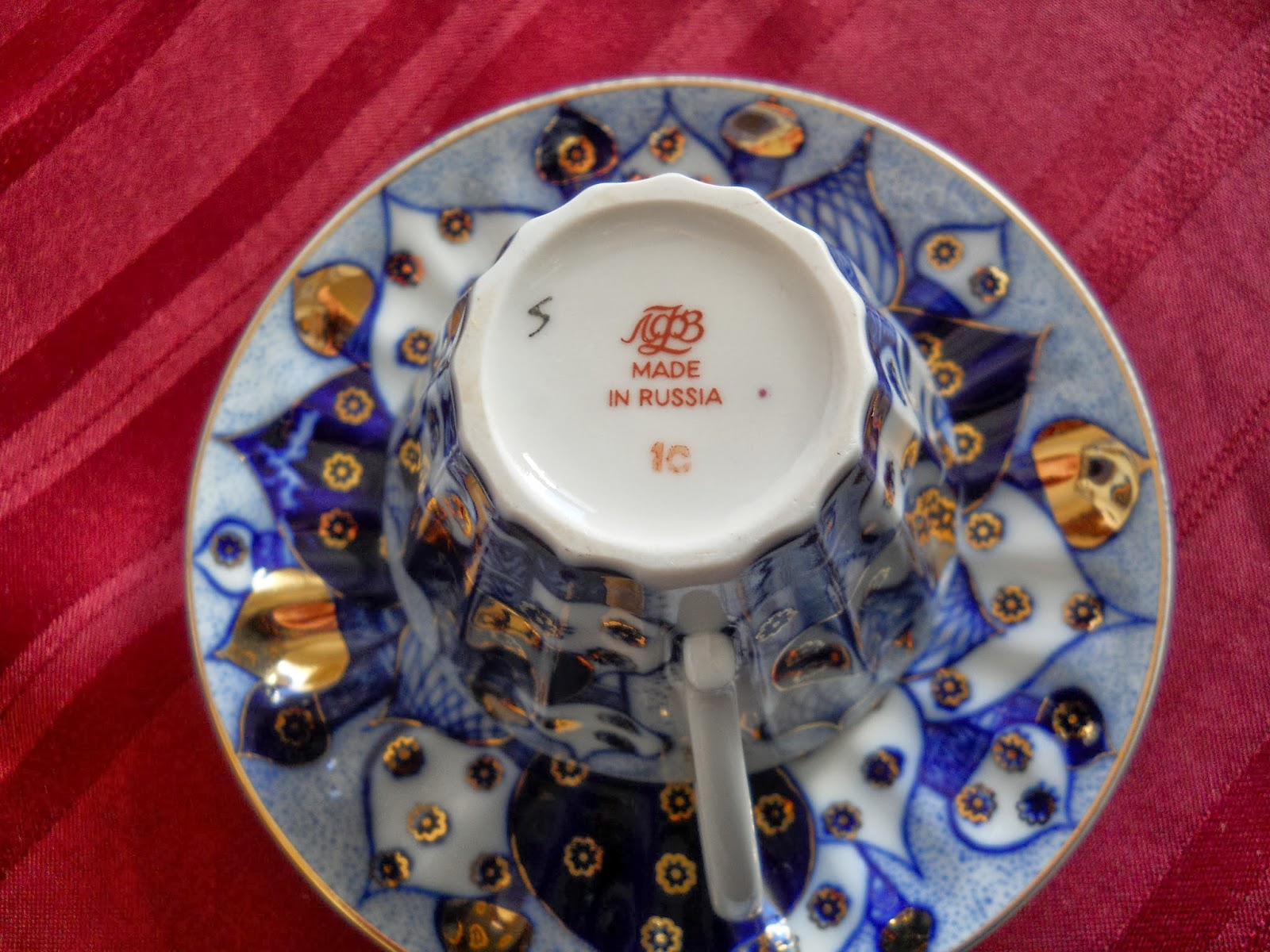 Because I am inviting you over for tea, I must serve you some kind of snack because you wouldn't invite someone over and just serve them tea in Russia. 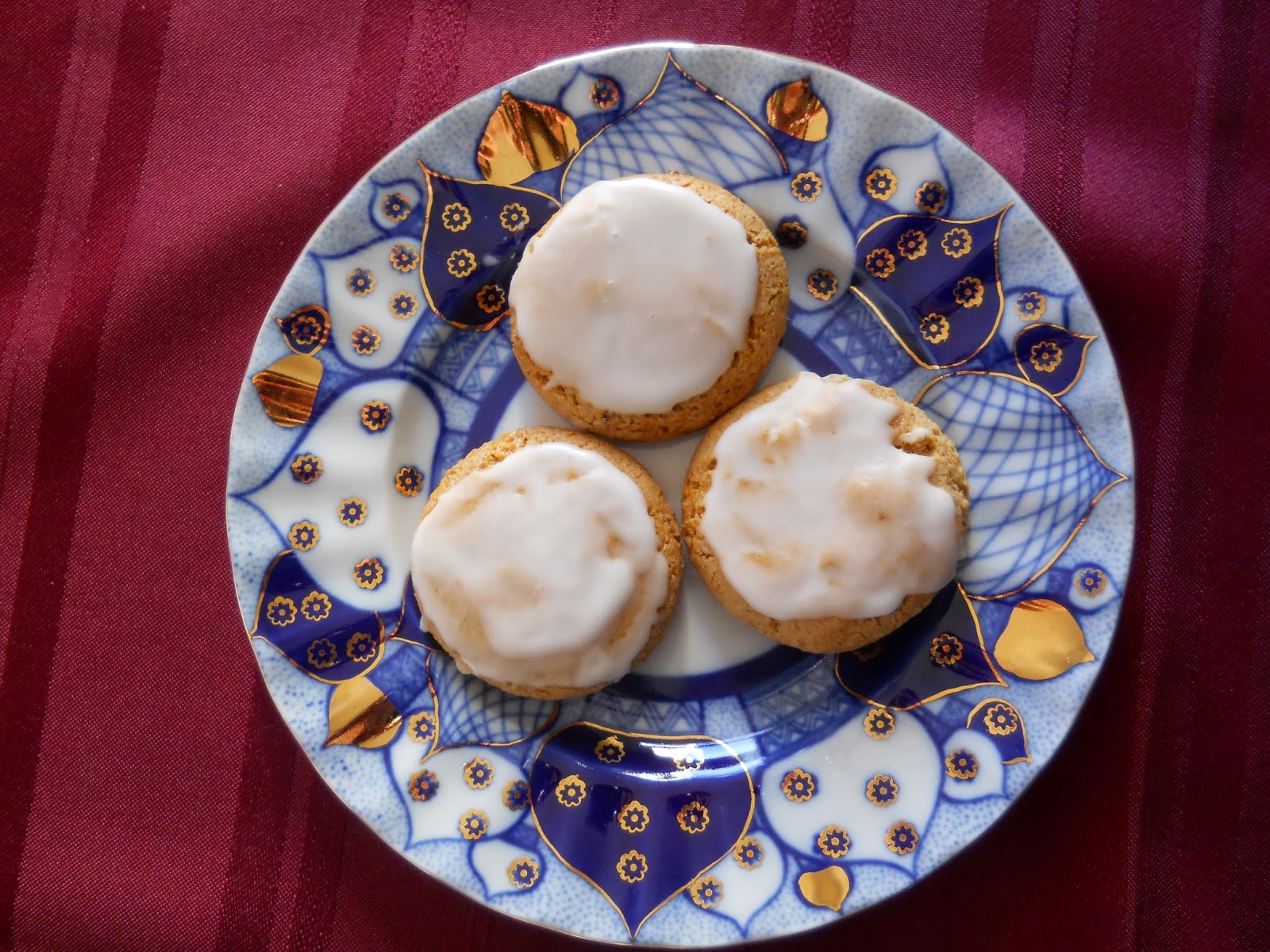 These are pryaniki (honey cakes in English) and are a Russian spice cookie.  See here for the recipe and a bit of history about these cookies.  They reminded me of a Gingersnap but were rock hard (though it is very possible that I over cooked them because they are the only cookie I have ever made without butter and with loads of honey).  They were delicious if you dipped them in your tea first to make them a little softer, but I would not recommend taking a bite without doing so!   ﻿
I hope you've enjoyed our little journey into tea in Russia.  There are tea plantations in the area around Sochi, which are the northern most tea plantations in the world, so remember that when they are showing scenes of the surrounding area during the closing ceremonies tonight! 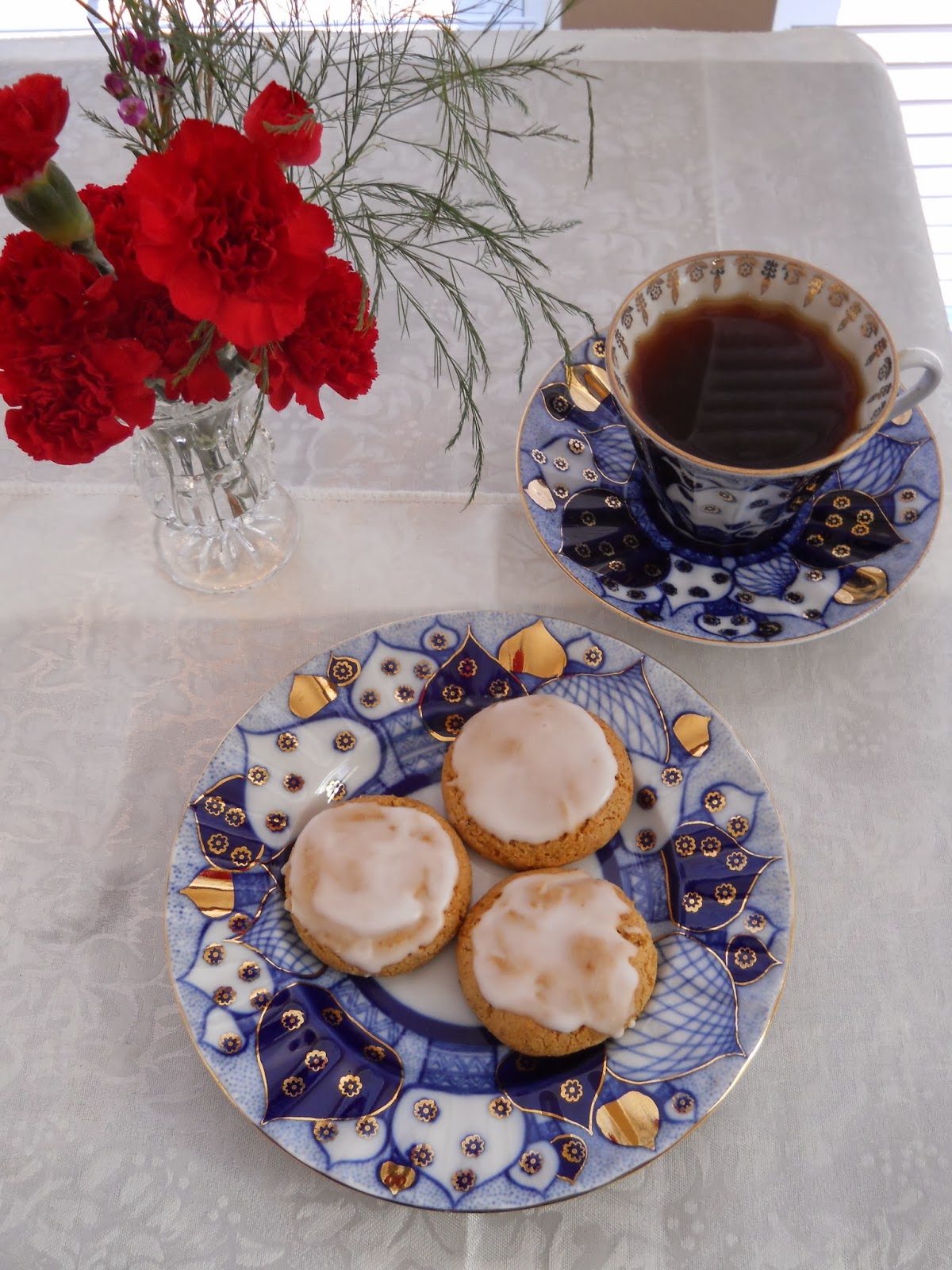 Sources:  Podreka, Tomislav, Serendipitea:  A guide to the varies, origins, and rituals of tea, William Morrow and Company, Inc., New York (1998).
http://en.wikipedia.org/wiki/Russian_tea_culture
http://gorussia.about.com/od/russian_drinking/a/Tea-Time-In-Russia-Russian-Teatime-Traditions.htm
http://www.russianlife.com/blog/tea-time-in-russia/
http://www.fodors.com/world/europe/russia/sochi/review-588740.html (tea plantations near Sochi!)
And the Kustodiev painting is from this blog:  http://bjws.blogspot.com/2014/01/off-to-russia-winter-shawls-summer-tea.html
And please let me know if I got anything wrong!
I shared this post with http://blog.bernideens.com/ for Friends Sharing Tea.

Email ThisBlogThis!Share to TwitterShare to FacebookShare to Pinterest
Labels: A World of Tea