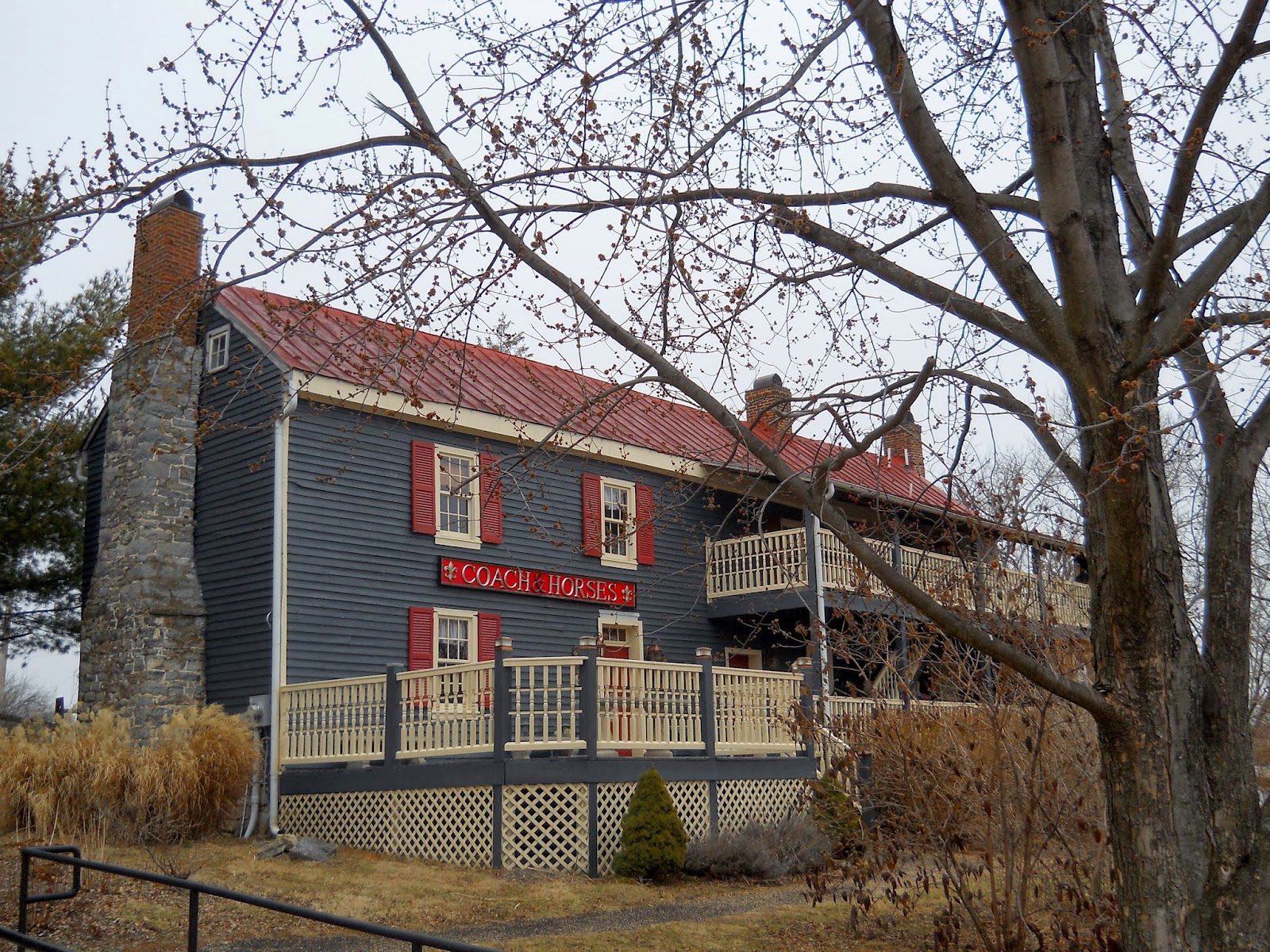 The tea room is in a house made of log, frame, stone and brick dating back to the late 18th and the early 19th centuries. It is listed on the national register of historic places under its original name, Homespun.  According to the tea room's website, the first owner was a weaver (among other interests); maybe that has something to due with its original name? 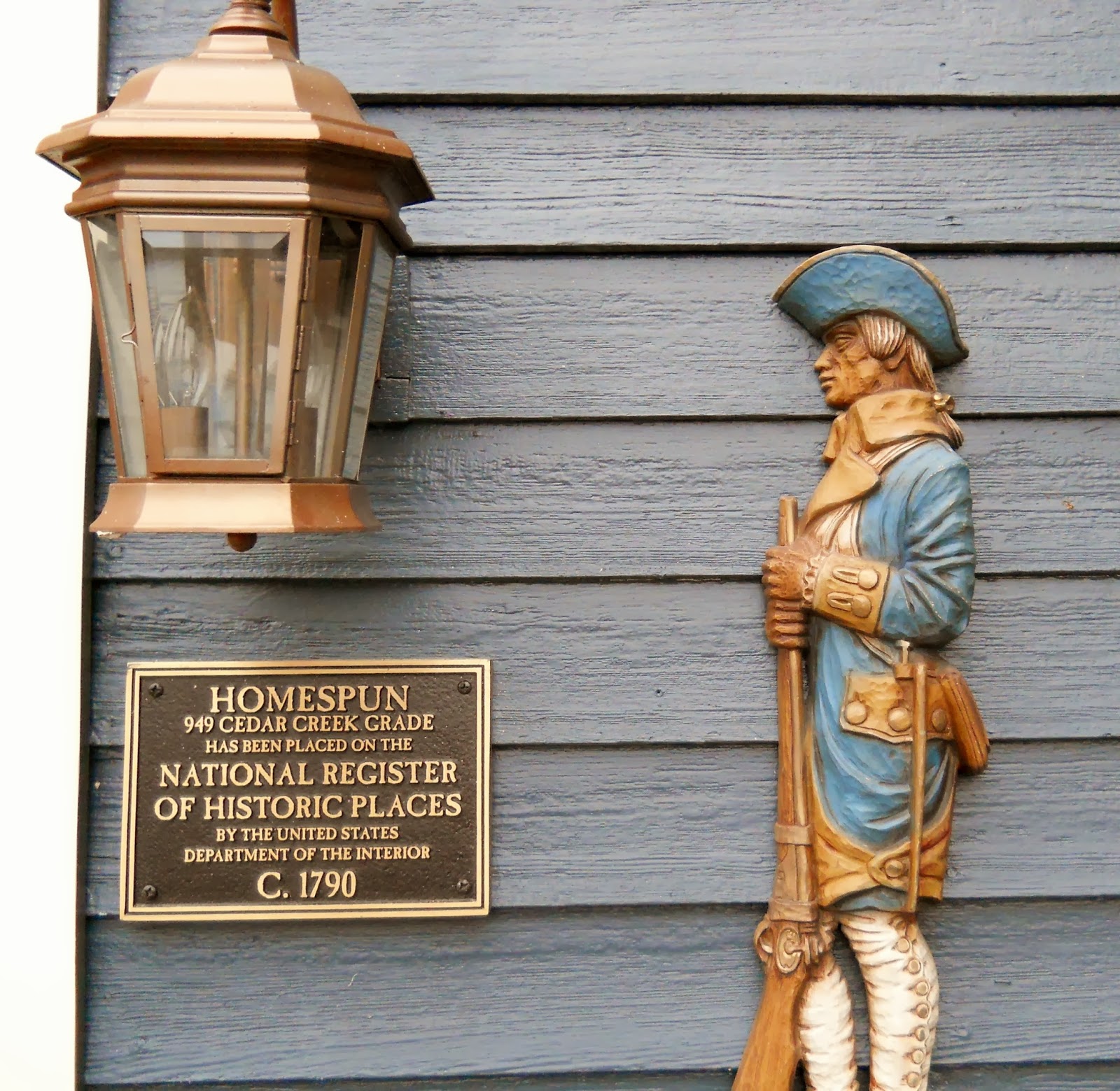 We entered in the foyer of the house and I could see two rooms set and ready to serve tea.  One of them is below: 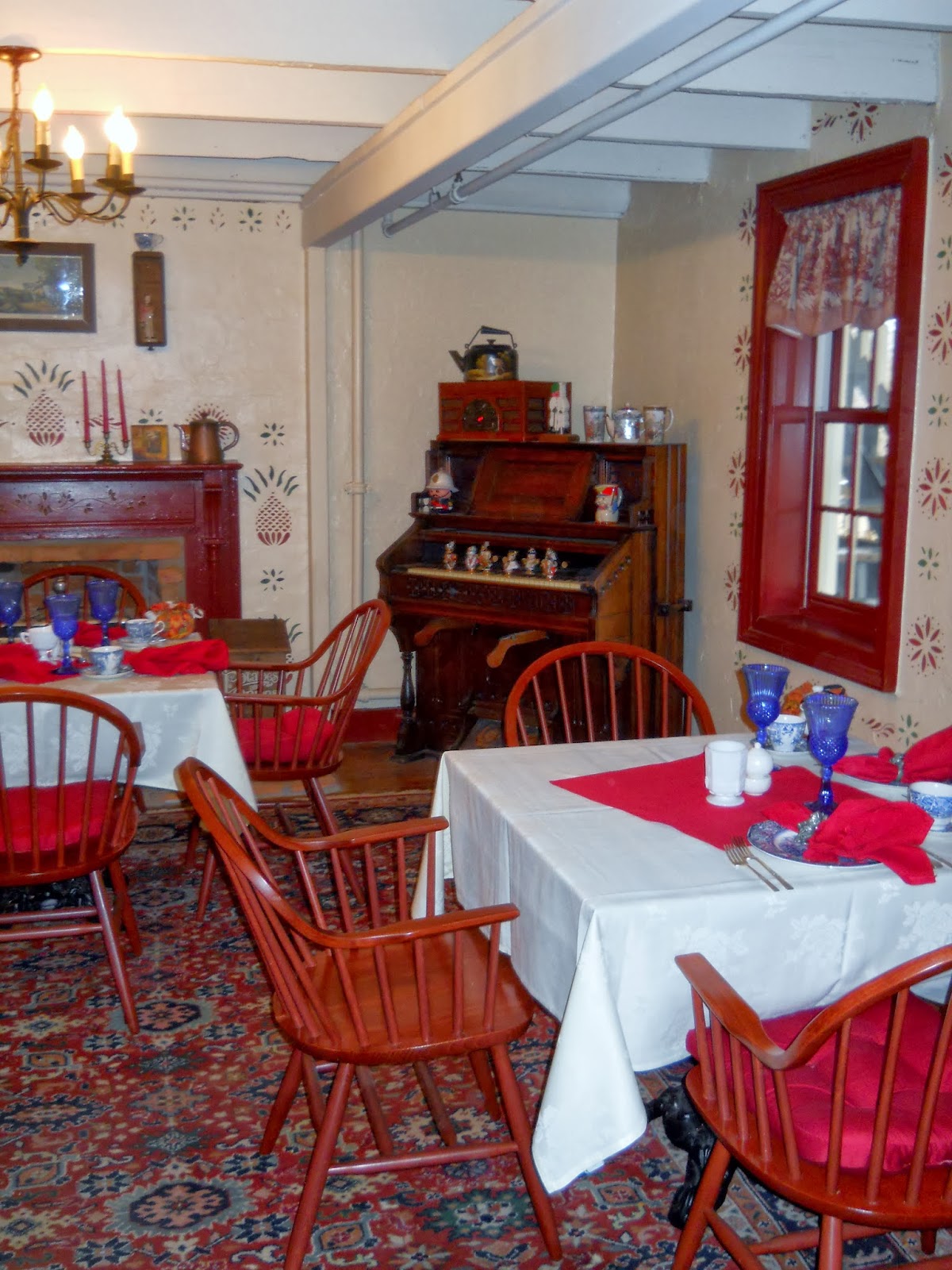 They were expecting a large party and seated us upstairs so we would not be disturbed.  The second floor was much more interesting than the first as the logs making up the walls were visible and it was very apparent you were in a very old log cabin.  The owner was very friendly and explained after seating us that the walls on the first floor had been covered so they could be decorated, but the second floor was left open, in part because earlier covering jobs had not been done well and were removed. 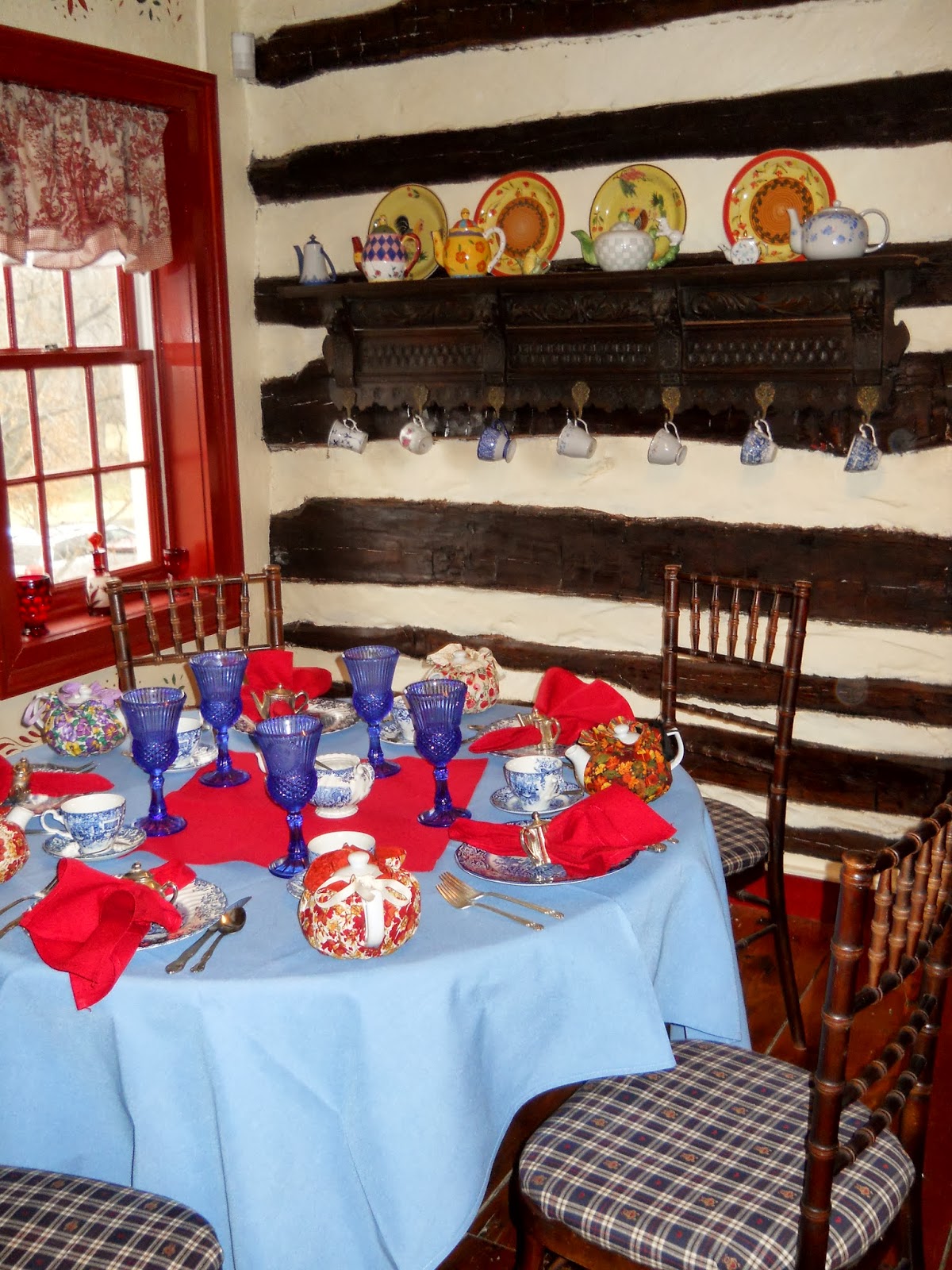 The table was set with blues with red accents that really popped.  To go along with the house's age, the tea room had a colonial theme.  For example, we all ordered the "Benjamin Franklin,," a traditional three course (savories, scones, dessert) tea, but they also offered the "George Washington" that included a salad or soup, or the Boston Cream Tea Party, a cream tea (how clever!).  The plates were blue transferware also with a colonial theme: 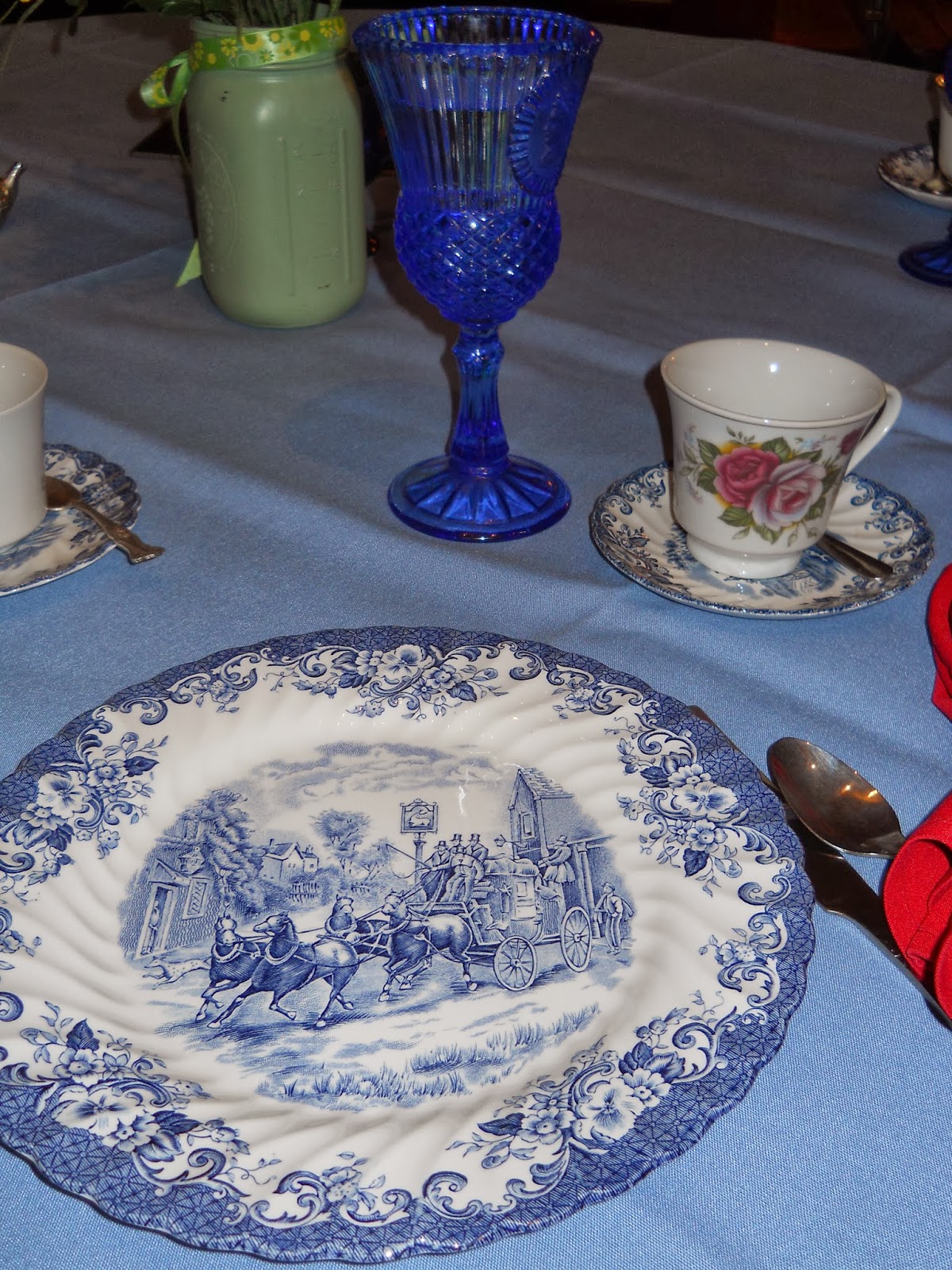 Unfortunately my glass is turned partially away from the camera, but even the blue water glasses had a colonial lady on them!
The tea room had a wonderful selection of tea.  I had the Maple Sugar, a black tea with maple syrup.  The tea was delicious with just a hint of maple taste.  My aunt got the French Vanilla Bean black tea, which was also good, and my uncle choose the Strawberry Ginger Peppercorn, that, although it sounds a little strange, was delicious.  My mother got the Mango Rose, which was my least favorite of the flavors we tried.  We each got our own small pot of brewed tea.
Tea began with a plate of large scones along with homemade preserves and Devonshire cream.  Isn't the plate they were served on beautiful? 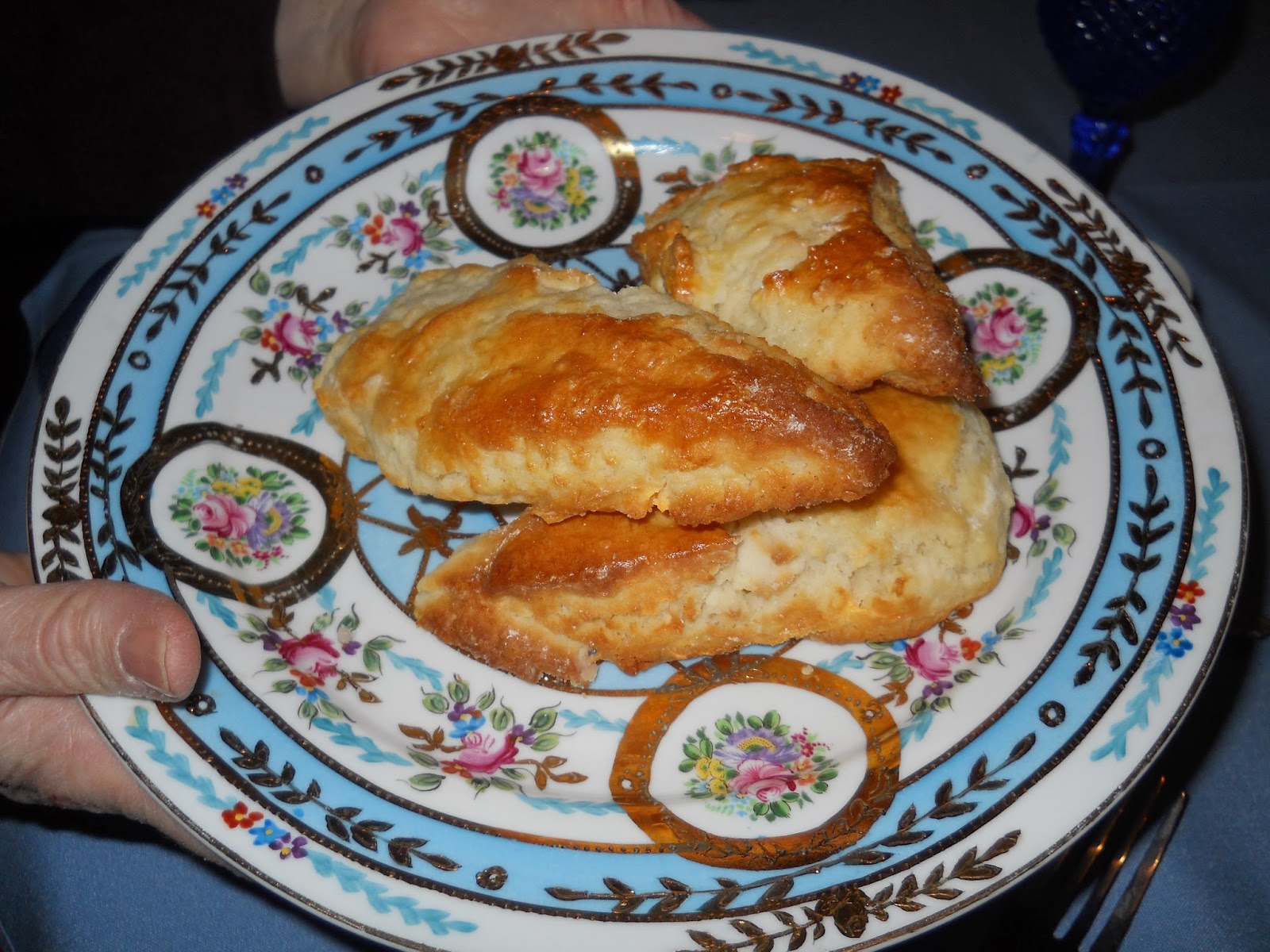 After we finished our scones, the tiered tray arrived. 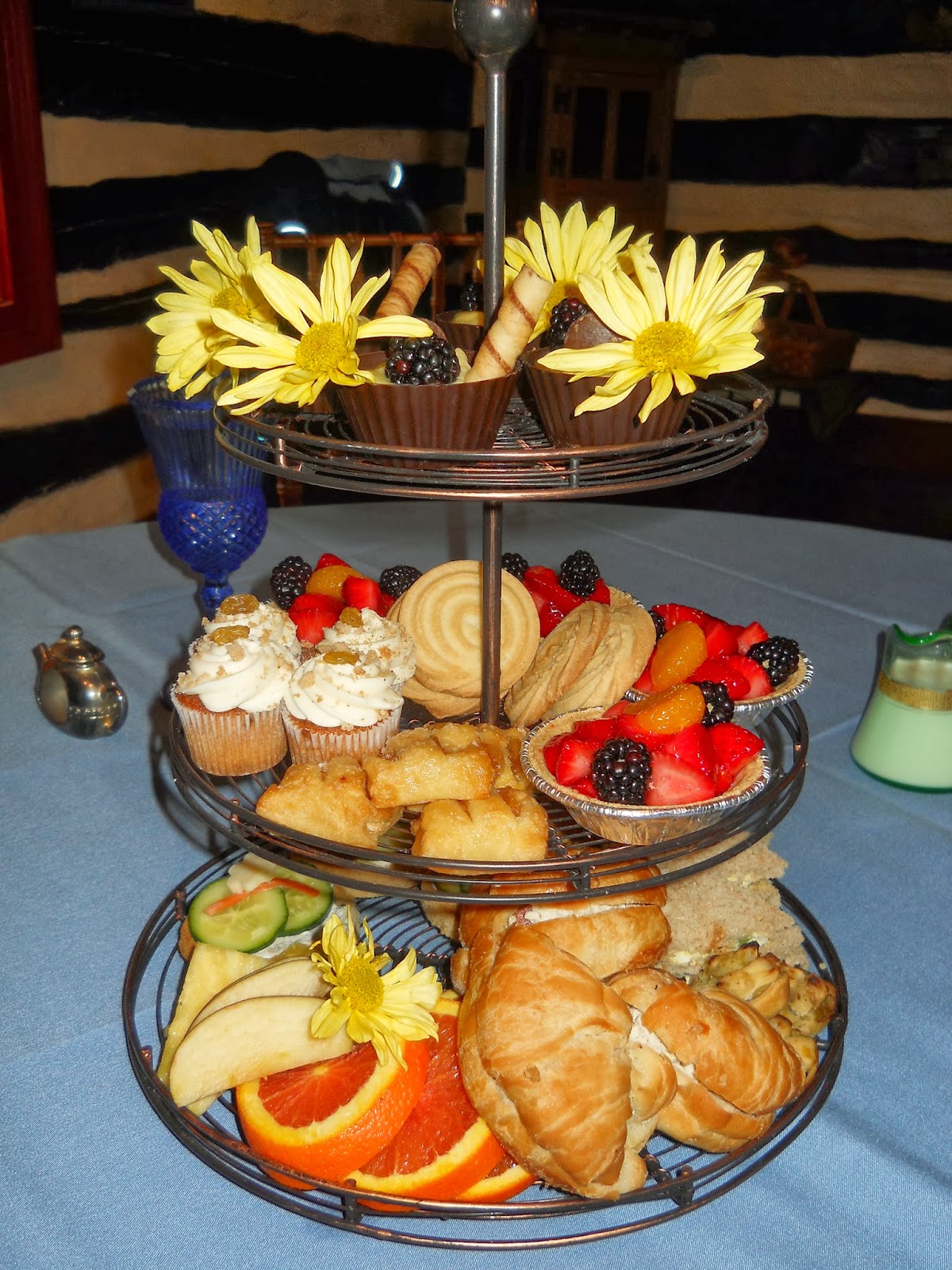 On the bottom is a selection of savories and fresh fruit, including: chicken salad on croissants, apple leek and chicken tartlets, egg salad on wheat, spinach mini-quiches, and cucumber sandwiches.  The cucumber sandwiches were really cute with a cheese flower as a garnish.  The cream cheese had ranch seasoning in it--what a great idea I'll have to try at my next tea! 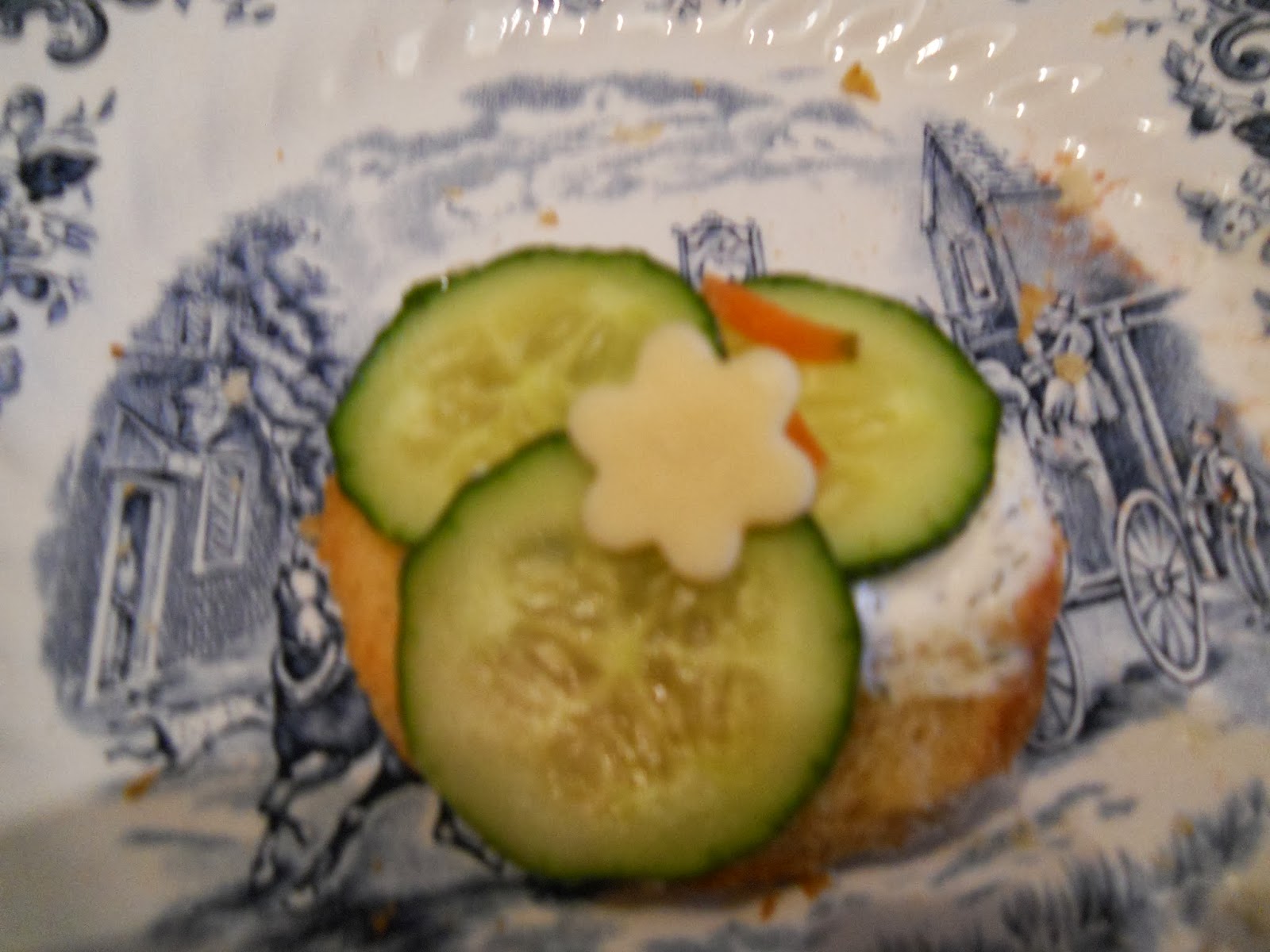 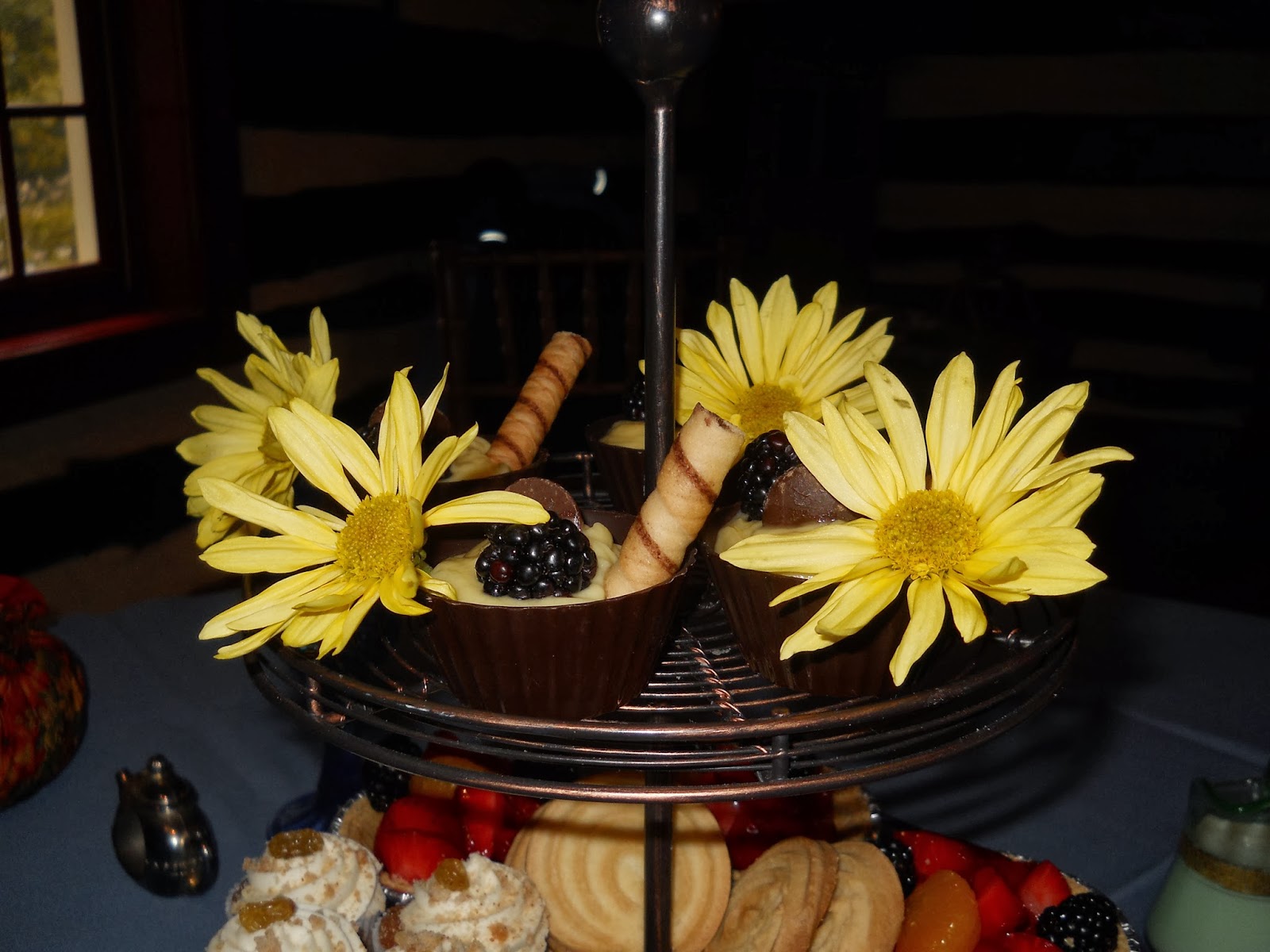 It was a really wonderful tea and I greatly enjoyed the atmosphere.  I'm definitely going to have to go again!  Did I mention that they also serve lunch, including Cornish pastries, pot pies, and shepherd's pie?  I can't see myself branching out because I enjoyed the tea so much, but you never know.  I highly recommend this tea room and am very grateful my aunt and uncle brought me here!
﻿
﻿
Posted by Carrie at 11:39 PM