We are finally getting to the main event of Pooja's tea--the fancy cupcakes!  I taught myself using youtube videos how to do buttercream decorations so that I could have the dessert course of the tea be extra special.

First, the pina colada cupcake.  As you can see, the colors in this cupcake were an attempt to continue to use Pooja's wedding colors.  In particular, this cupcake had teal blue paper and the blue umbrellas of the bridesmaid saris and the red cherry reminiscent of Pooja's sari for the ceremony: 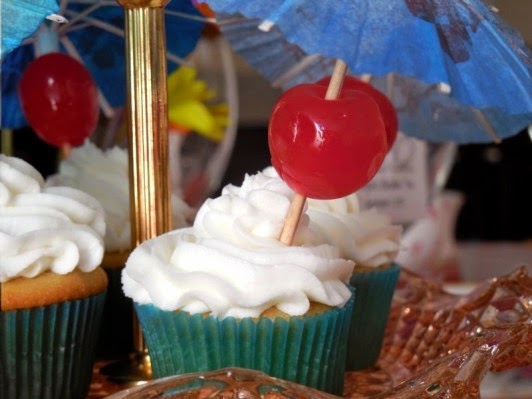 (picture by co-host Amanda)
I found the cupcake recipe on a blog called Baked Perfection (click on the link if you would like the recipe).  This cupcake was delicious and a big hit.  I used mini-cupcake tins if you like the size of my cupcakes, so I had to adjust the baking time--I think it took about 12 minutes in my oven.

I did not use the icing on the website.  I made it and it was very yummy, but it was too runny for me to use with a decorating tip.  Instead I used my go-to buttercream recipe from allrecipe, which is basically Wilton's recipe.  I have made some changes to the basic recipe and I added flavoring to make it pina colada, so I will put it on the blog:

Pina Colada Frosting:
1/2 cup shortening
1/2 cup butter, softened (I use salted)
4 cups confectioner's sugar
1/4 tsp salt
1tsp coconut extract
2 tablespoons pineapple juice plus 2 teaspoons (with a couple of small pieces of crushed pineapple.  To get the pineapple juice I used what remained after making the cake recipe which called for crushed pineapple)

In a large bowl, cream together the butter, shortening, and extract.  Blend in sugar, one cup at a time, beating well after each addition.  Add salt.   Beat in the pineapple juice and continue mixing until light and fluffy.

I also used mini-cupcake tins because I made 3 different types of cupcakes.  Check back for more on the other two recipes!