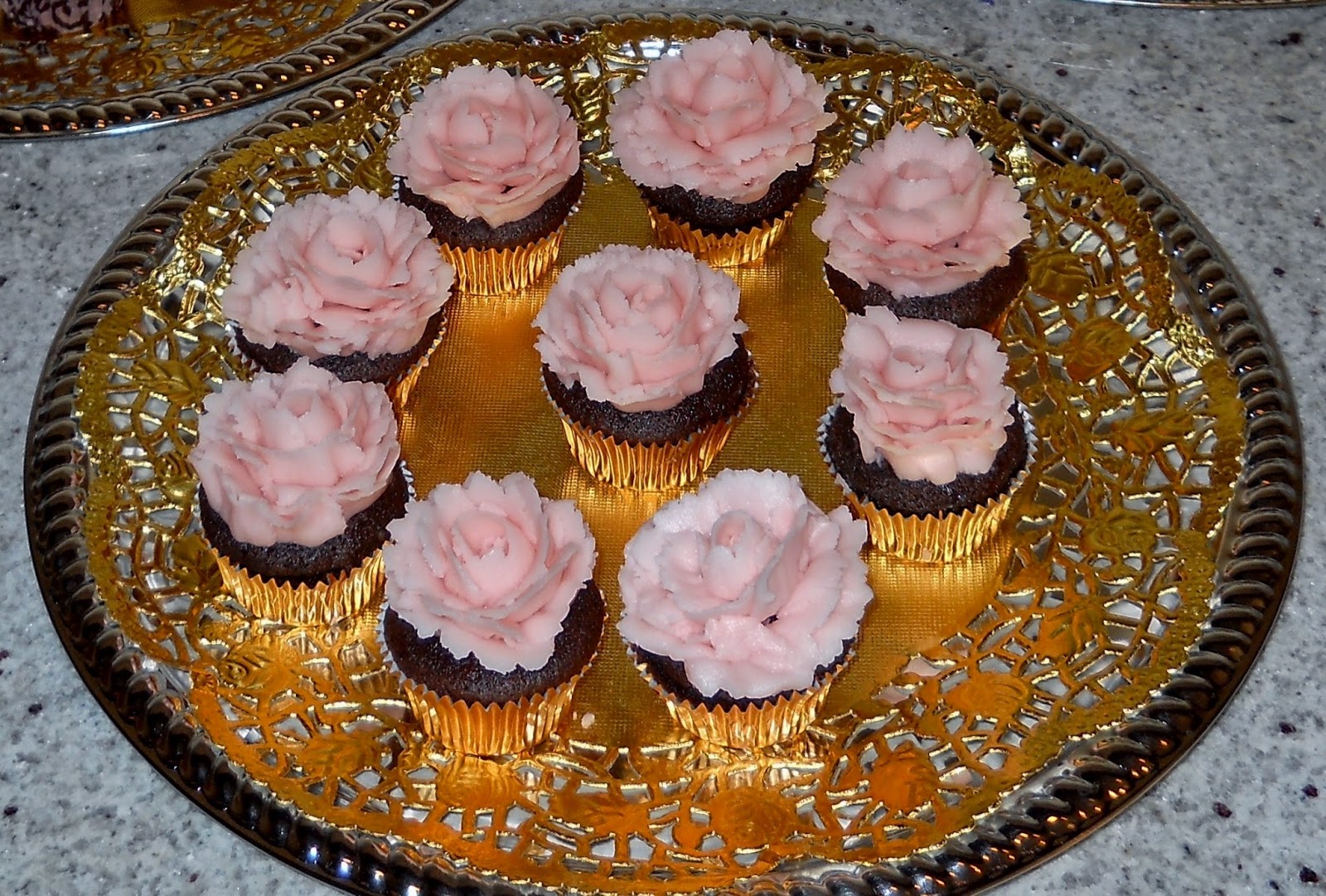 (the cupcakes in this picture were the extras, so these aren't the best buttercream roses I made.  Unfortunately, this was pre-blog and I don't really have a good close-up)

I used the ultimate chocolate cupcake recipe (found here) from the Cupcake Project, an extremely fun blog that has all different sorts of cupcake recipes.  If you've thought of a cupcake, they probably have the recipe, or at least one you can use as a base for your creation.

I filled the mini-cupcake tins (by the way, with mini-cupcakes, you have to reduce the cook time--it took me about 11 minutes) and then placed one maraschino cherry (drained and dried, with the syrup reserved) in the well.  I used gold foil because gold was one of Pooja's wedding colors and because foil liners worked best with the dark cupcake.

For the icing, I used my base recipe, but used some of the cherry syrup instead of milk (see below for base recipe).  The syrup had the added benefit of giving the cupcakes a pink caste so the roses would be pink.  I made some trial cupcakes with red icing, which was my original plan, but it took a lot of dye and got red everywhere, so I decided against red roses for the tea.


Base Buttercream Recipe
1/2 cup shortening
1/2 cup butter, softened
1 teaspoon vanilla extract
4 cups confectioner's sugar
2 tablespoons heavy whipping cream
1/4 teaspoon salt
In a large bowl, cream together the butter, shortening, and vanilla.  Blend in the sugar, one cup at a time, beating well after each addition.  Add salt.  Beat in the milk, and continue mixing until light and fluffy.
Fancy cupcake number 3 was a chai carrot cake cupcake.  Chai is a popular tea in India. 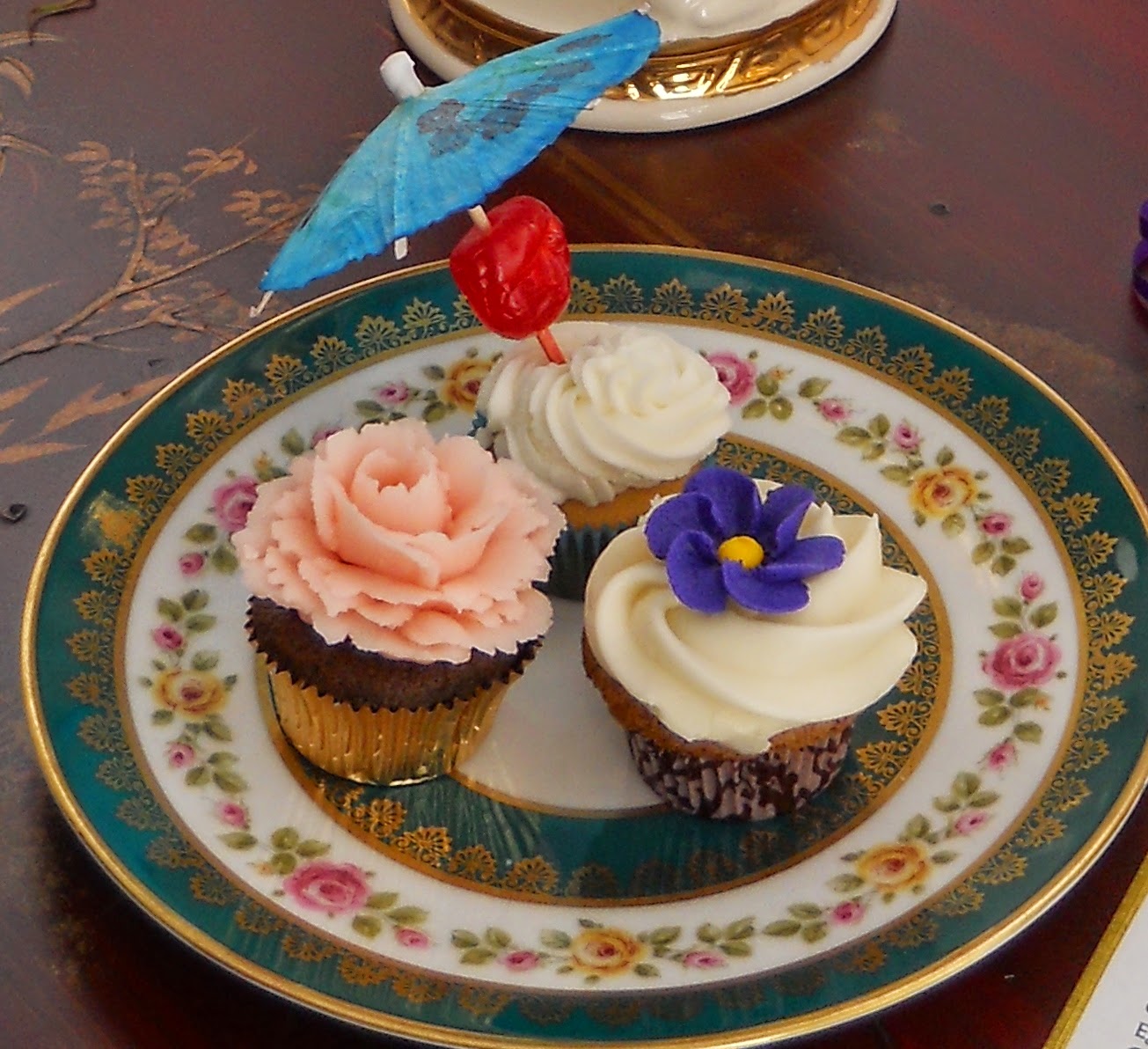 For the this cupcake I used a King Arthur's recipe, but I made some changes to make it "chai" so I will copy the recipe here.


1) Preheat the oven to 350°F. Line with papers.  Make sure you grease the top of the pan with baking spray.
2) To make the cupcakes: Beat together the oil, sugar, salt, eggs, and spices.
3) Mix the flour with the baking soda, and stir in.
4) Add the carrots and nuts, and mix until just blended. Pour into the prepared pans.
5) Bake the cupcakes for 30 to 35 minutes, or until a toothpick inserted into the center of one of the middle cupcakes comes out clean. Remove the cakes from the oven, and after about 10 minutes transfer them to a rack to cool. Allow them to cool completely before frosting.
I used a cream cheese recipe I had cut out of a Better Homes and Garden magazine for the icing that I piped on with a large open star tip.
Cream cheese frosting:  In a large mixing bowl, beat together one 8 oz package cream cheese and 1/4 cup butter until smooth.  Beat in 1 tsp vanilla.  Gradually beat in 4 cups powdered sugar, one cup at a time.
A few days before making the cupcakes I piped buttercream purple flowers (I just make my basic recipe and added purple paste) on parchment paper set out on a baking sheet and left them out in the open for 48 hours so they could air dry.  The day I made the cupcakes, I used a butterknife to loosen them, and placed them on the top of the cream cheese frosting carefully still using the knife.  I then piped the yellow dots in the middle of the flower. 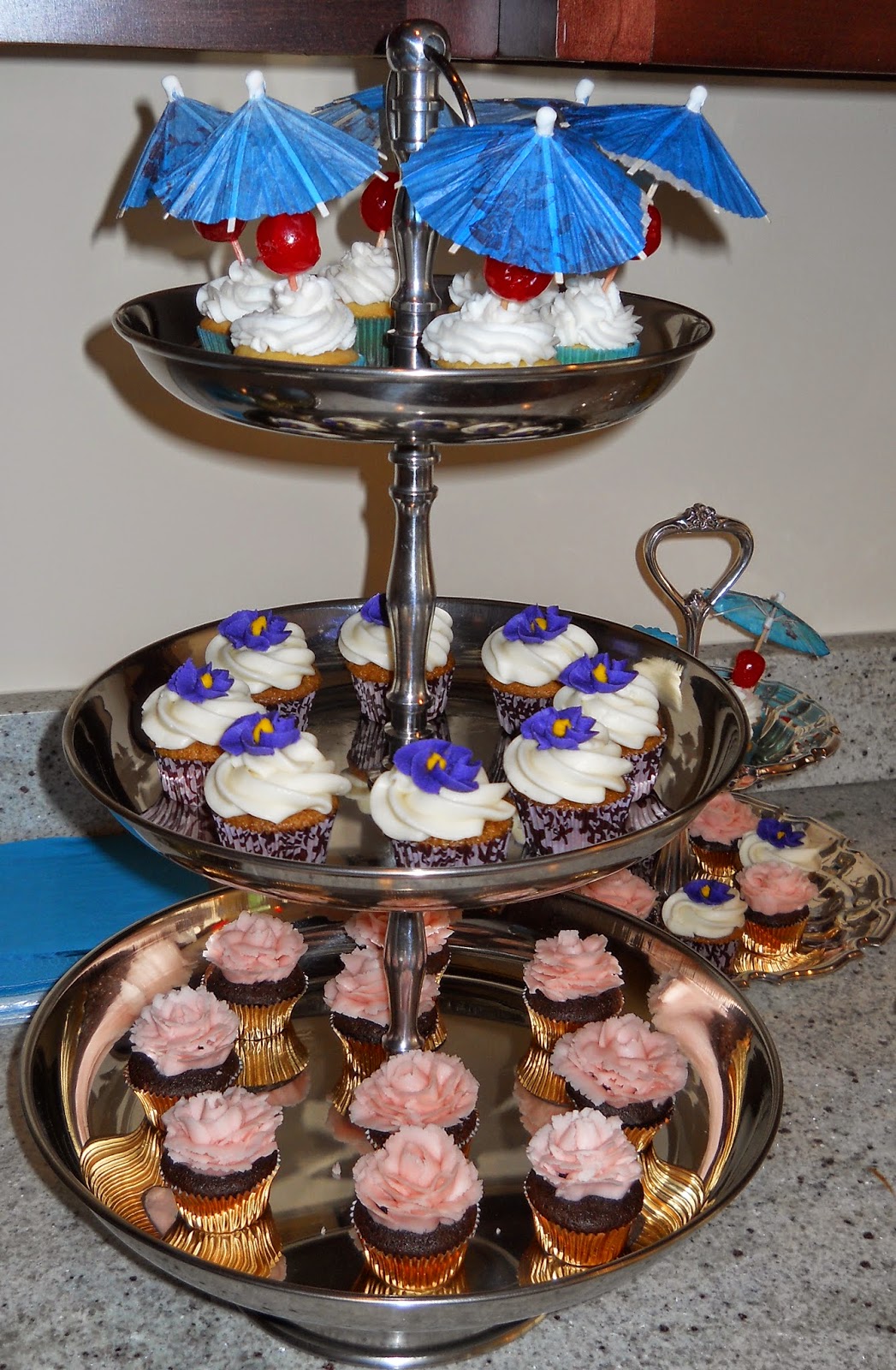 For the chai carrot cake cupcakes, I used a purple liner with a design on it that reminded me a bit of henna patterns.  I served the cupcakes to the large table on this three tier stand.
And now we have reached the end of Pooja's Bridal tea--thanks for visiting last week and this weekend!