Let me start this post with a bit of a confession--I am a bit of a nerd and a huge fanfiction, well, fan.  Fanfiction is free stories available on the internet based on T.V. shows, books, pretty much anything that is someone else's creation--thus the name "fan" fiction.

So, on to the main event.  I was reading some of my favorite type of fanfiction--Star Trek --when I came across a wonderful story I thought I would share on the blog.

A Vulcan Tea Party by L.L. MacLeod, is about my favorite Star Trek couple, Sarek and Amanda, Spock's parents. 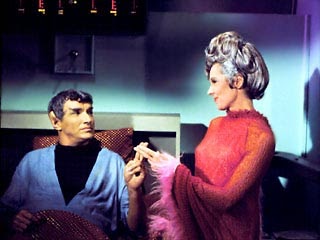 (picture from internet)
This story takes place when Spock was still a child, and Amanda takes a job teaching at his school.  There is a wonderful scene in the story where Amanda teaches the Vulcan children about the Boston Tea Party.  Later on the children ask her if they can try tea from Earth.  Just imagine, tea spreading across the universe!

There is also a quick scene in the story in which Sarek pictures a Vulcan device for making their equivalent of a tisane.  In a later incarnation of Star Trek (Voyager actually), we learn that Vulcans drink a spice tea--maybe something like a chai?  I can just picture Amanda making tea from Earth in the equivalent of a Vulcan tea kettle/pot.

I'll leave you with this funny little picture I found on the internet: 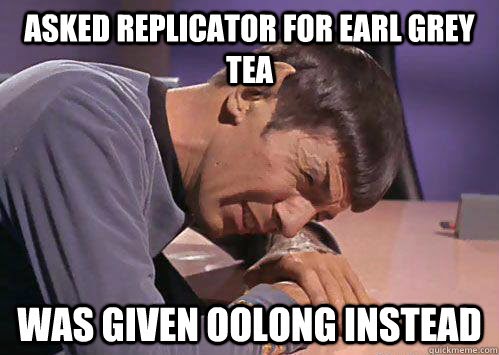