Norfolk, VA and a Graduation

My sister graduated from college this weekend down in Norfolk, Virginia.  (Congratulations, Katie!!) 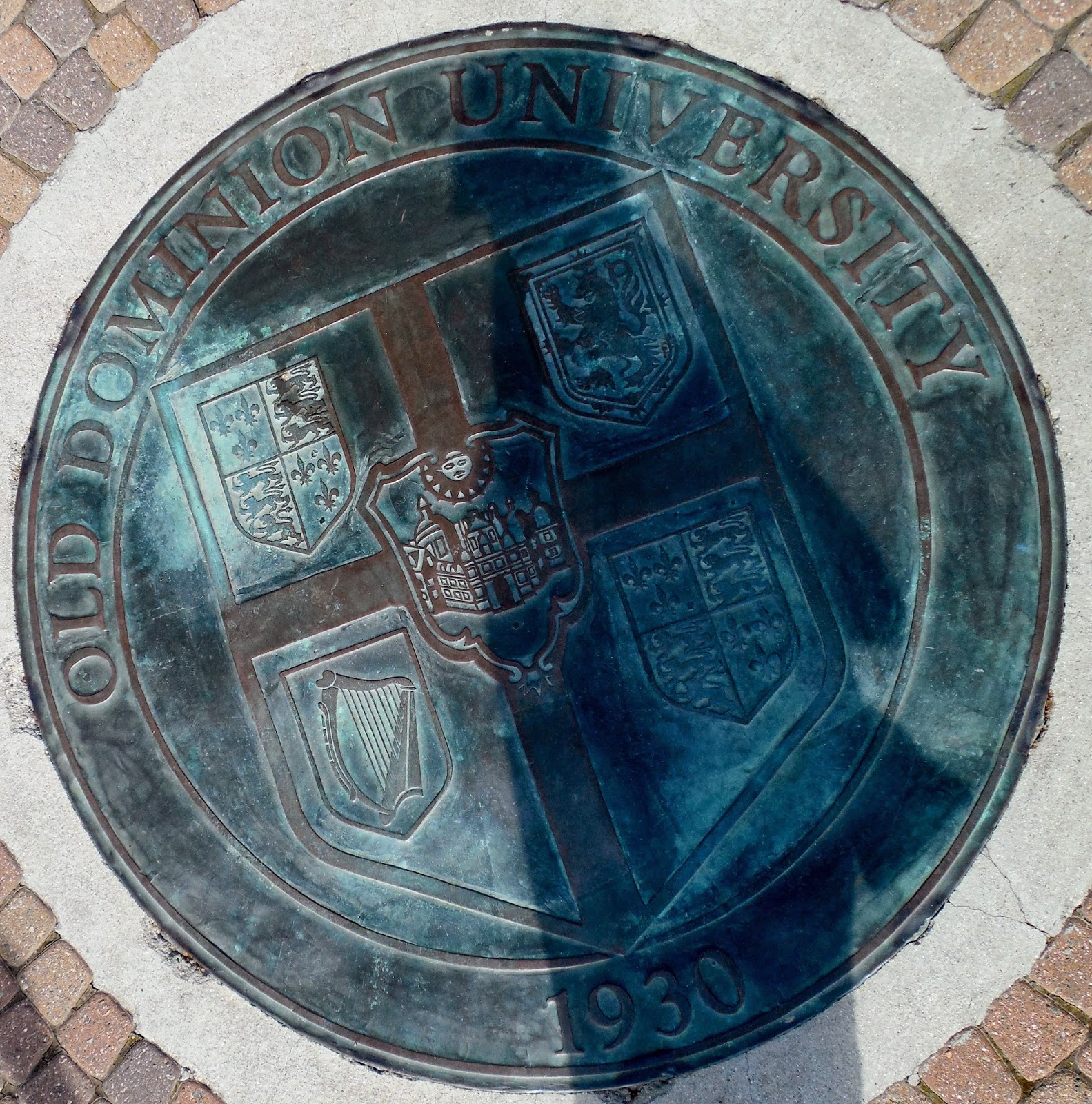 During my family's visits to Norfolk the last couple of years, we've gone to the Nauticus naval museum and the Battleship Wisconsin.  The museum isn't far from a garden in the Freemason District of Norfolk, which is home to the Pagoda Restaurant and Tea House, a gift to Norfolk and Virginia from Taiwan. 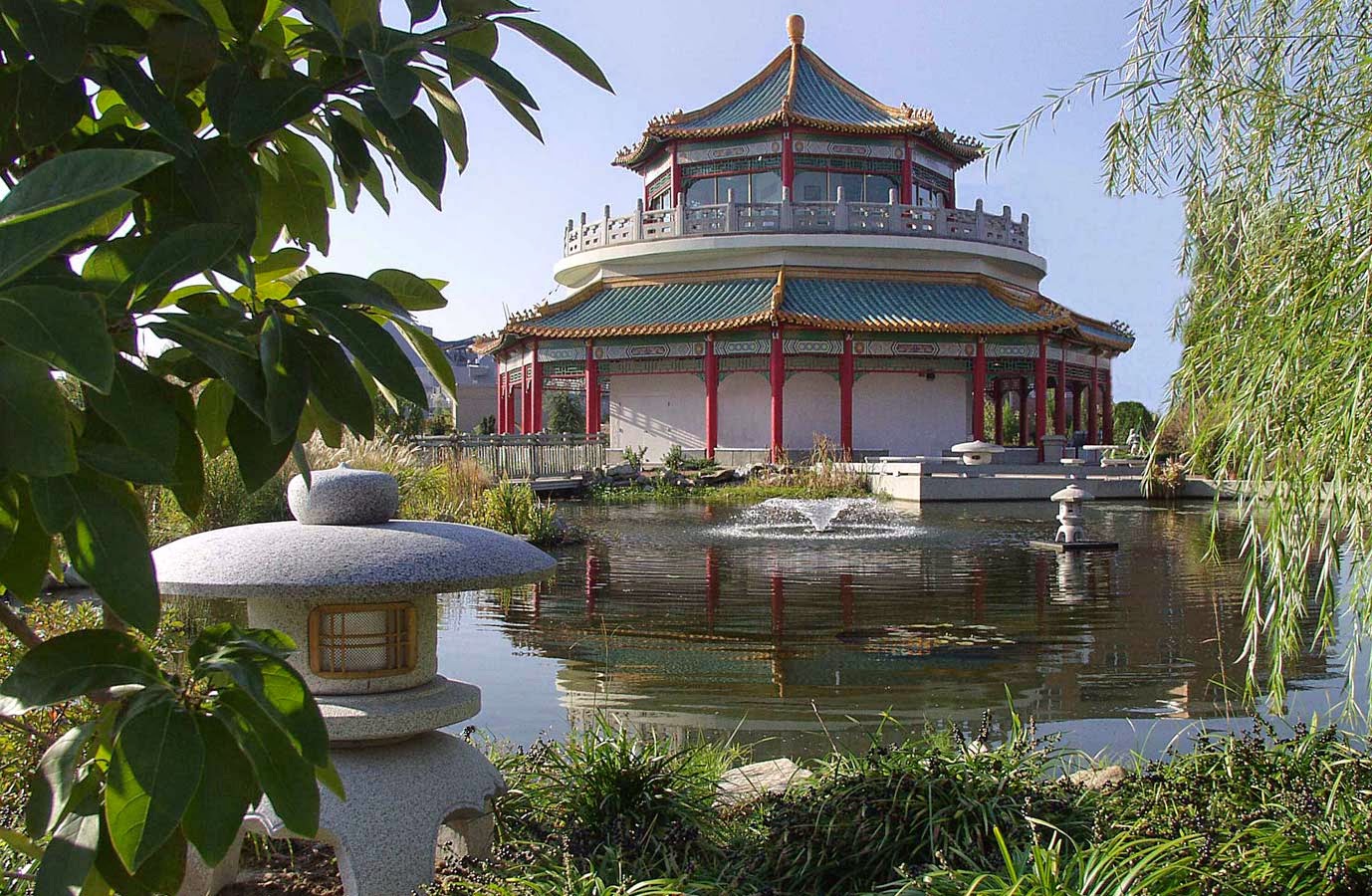 In 1989, the two-story octagon structure was built on and around the pillars that previously supported a 500,000 gallon molasses storage tank. Materials for the tower were manufactured in Taiwan and shipped to Norfolk where the Pagoda was meticulously assembled by artisans from Taiwan.  I read in one of the magazines in my hotel room that the pagoda serves tea on certain Sundays--something to look into at the very least!  It is a beautiful setting.

We did not go to the pagoda on this trip however, but we did go to a bakery we only found a few months ago, The Baker's Crust. 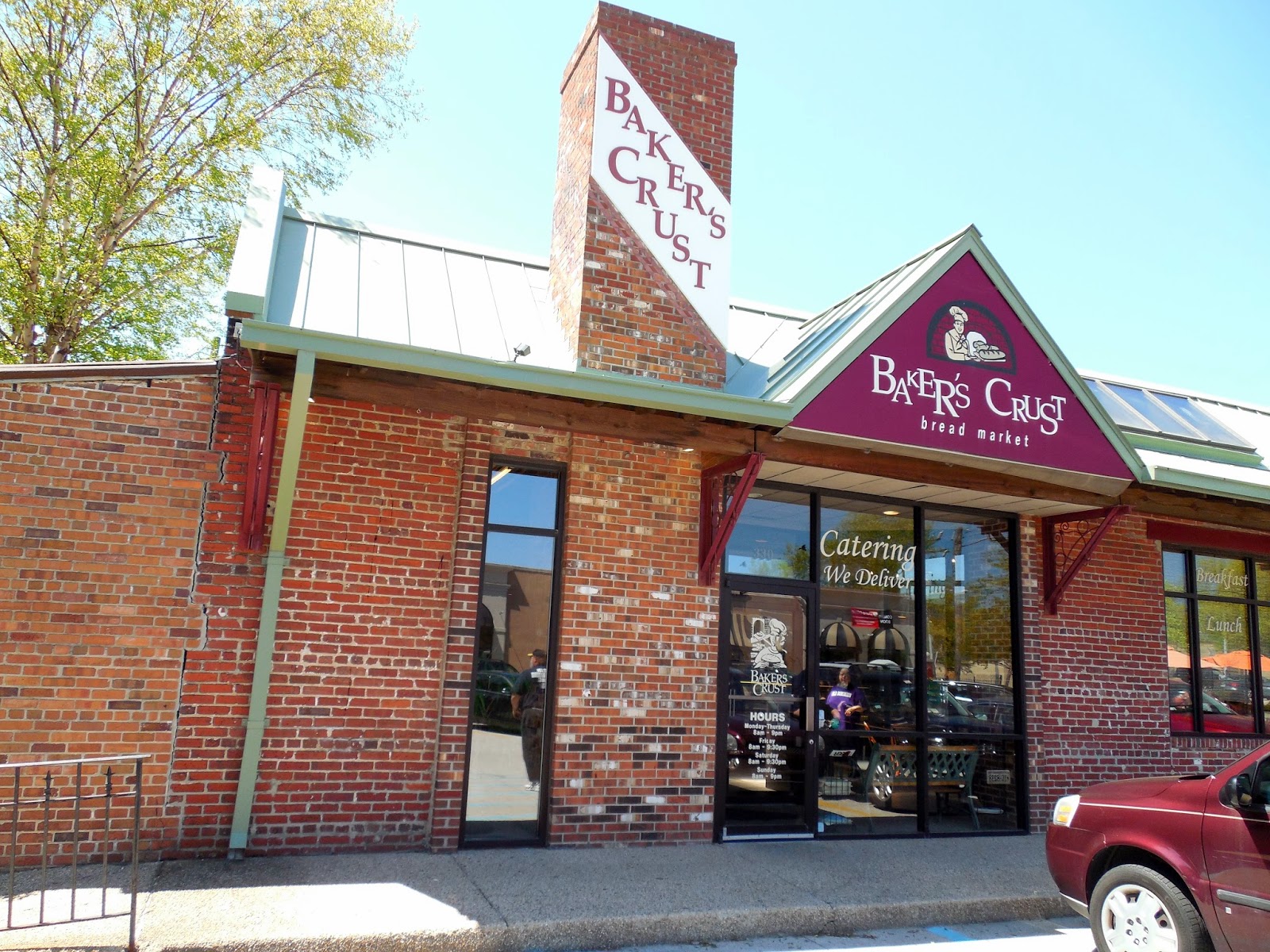 This restaurant doesn't serve formal tea, but is a wonderful place to stop for lunch or dinner.  They serve Revolution teas, including ginger peach black tea, which was my choice for the meal. 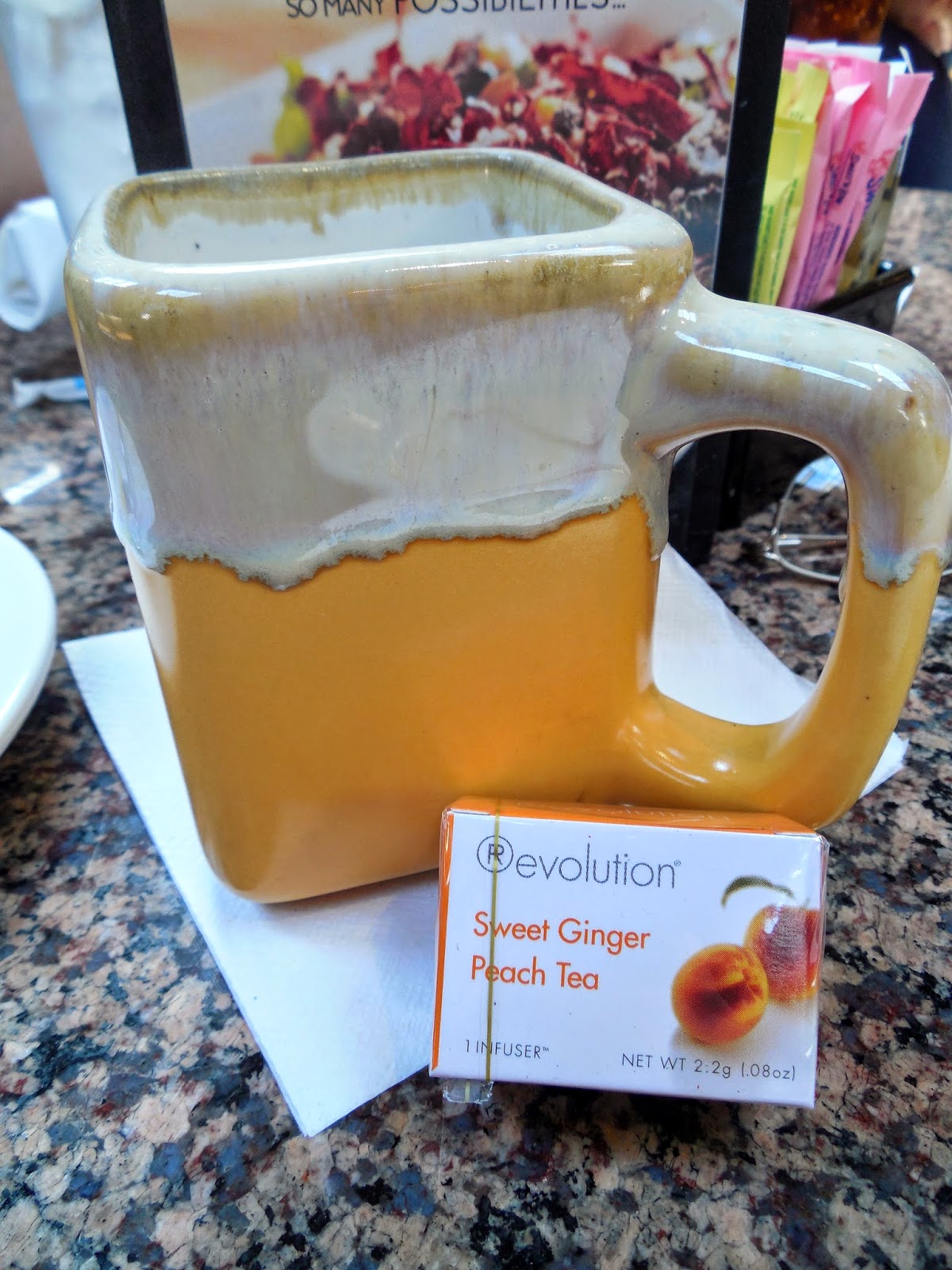 The tea was very good, with a strong taste of ginger and peach.﻿ 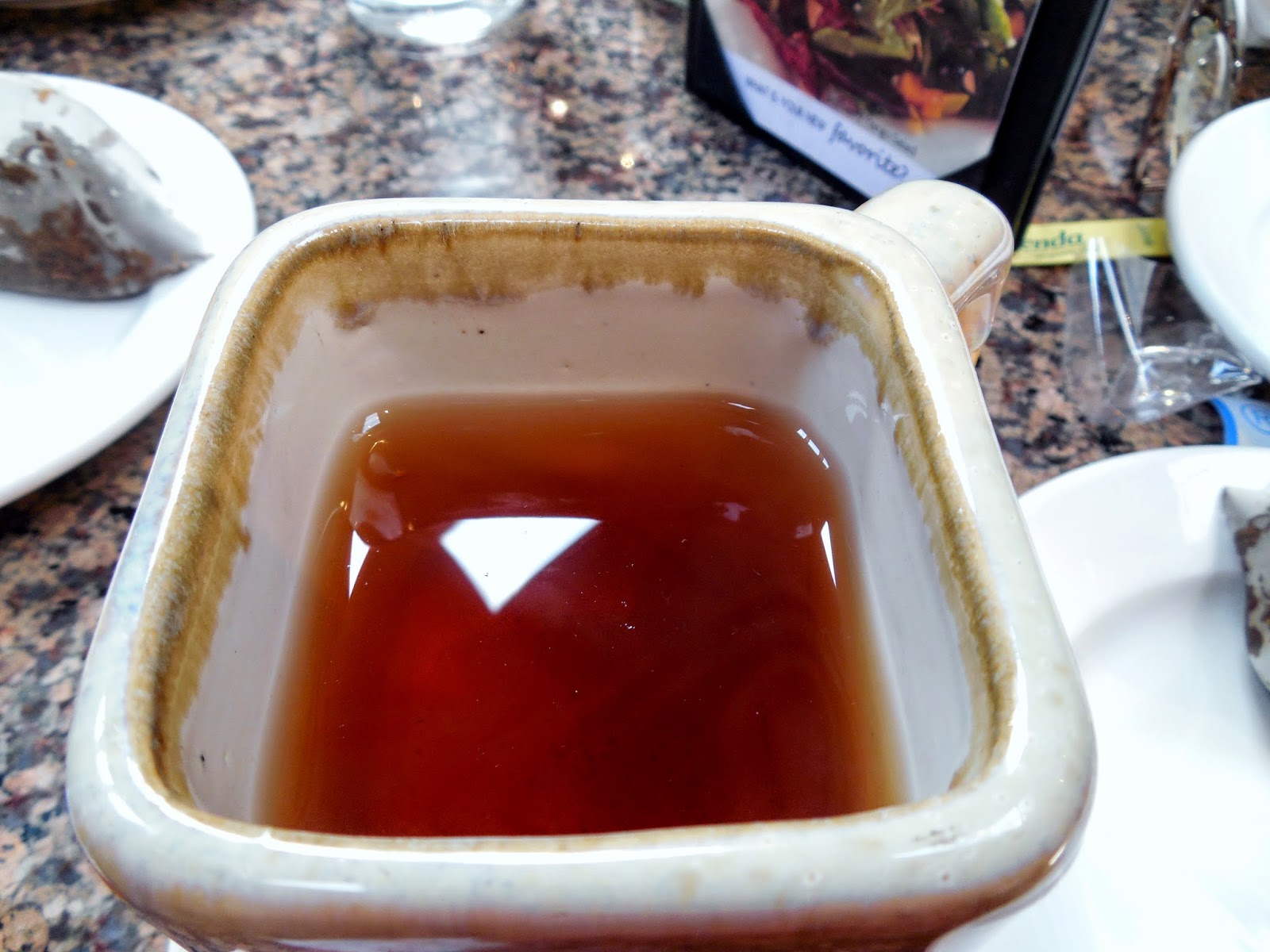 We stopped here for a late lunch, early dinner.  I had homemade potato chips (which were delicious) and fried chicken and a sweet sauce on a sweet potato biscuit.
﻿ 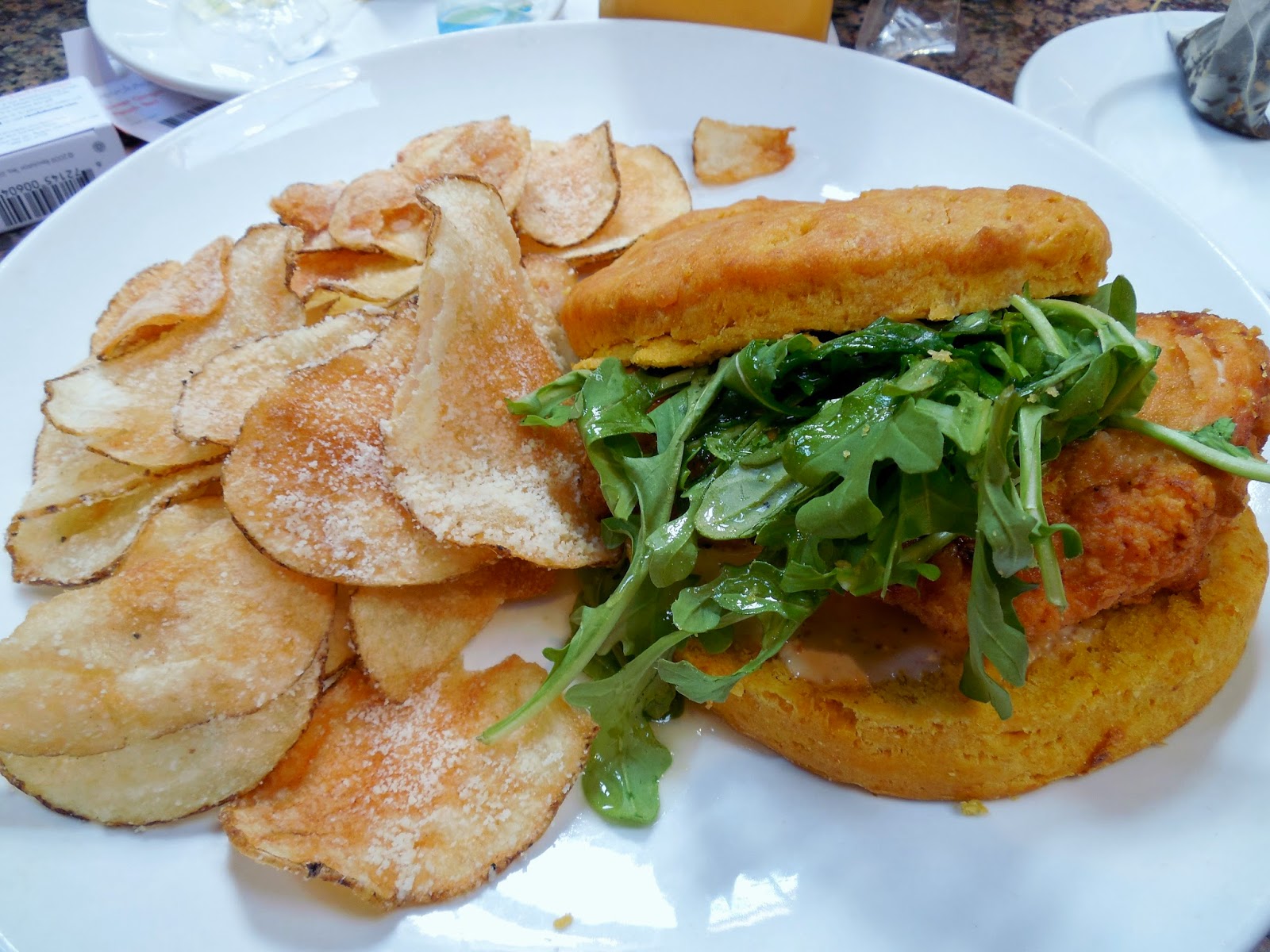 Horrible for me, but so delicious.

The bakery is in a cute little shopping center called "The Palace."  Among the fun stores there is one called the White Rabbit, and next door you travel under the trellis 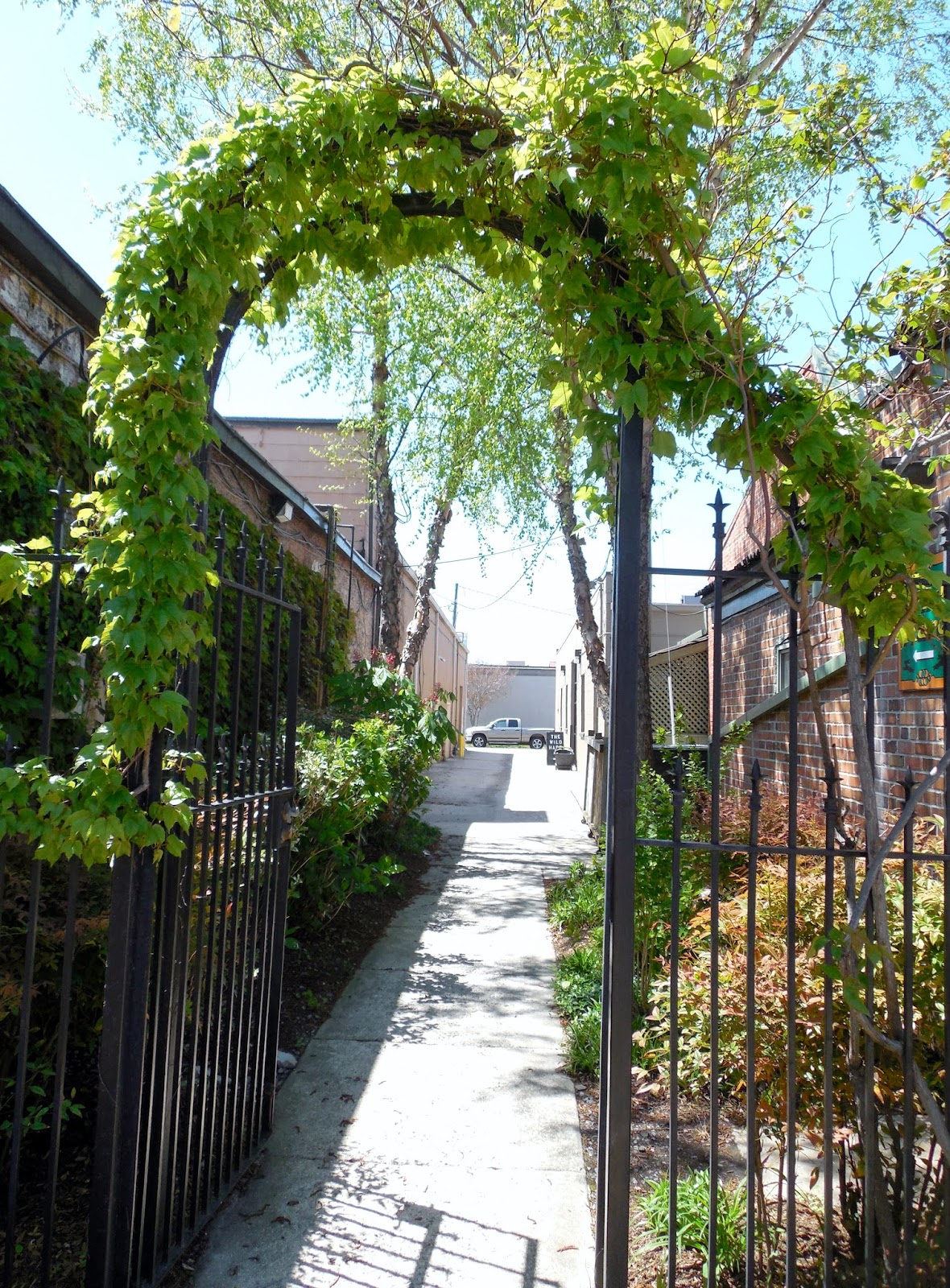 and down the walkway to the Wild Hare, a little consignment store.  On the other side of the parking lot is the Vintage Rooster, 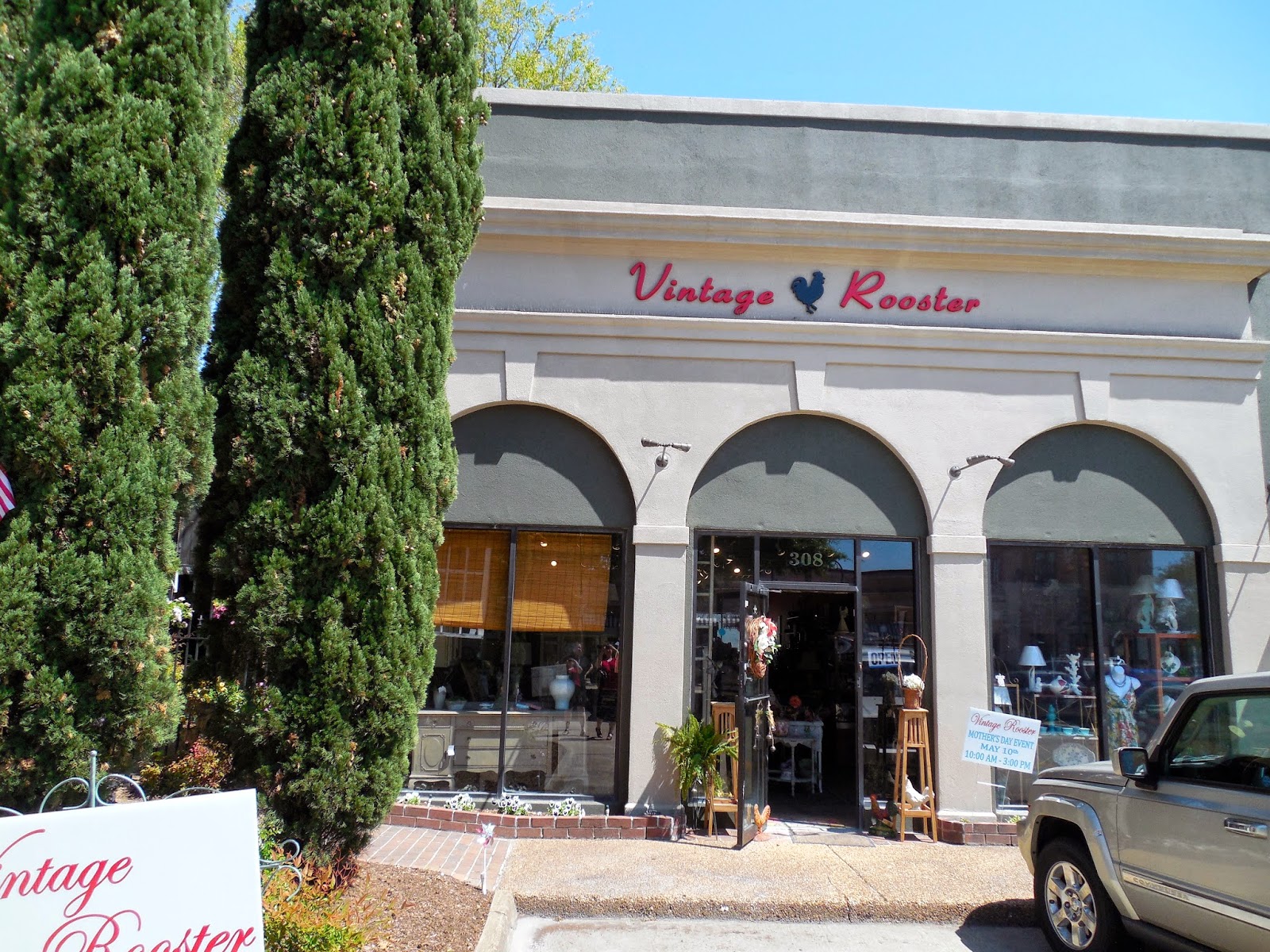 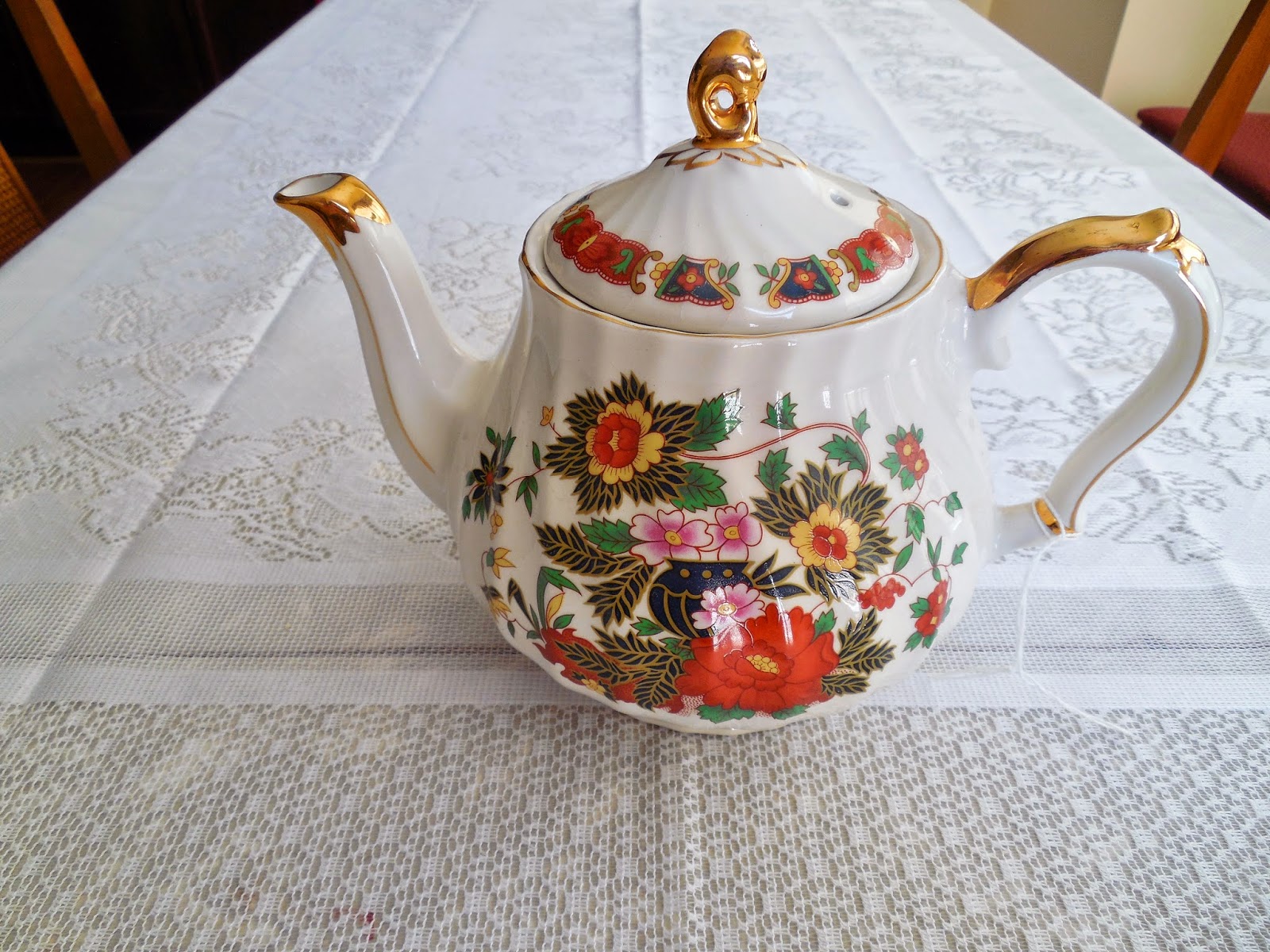 Here is the top of the pot--lots of pretty gold! 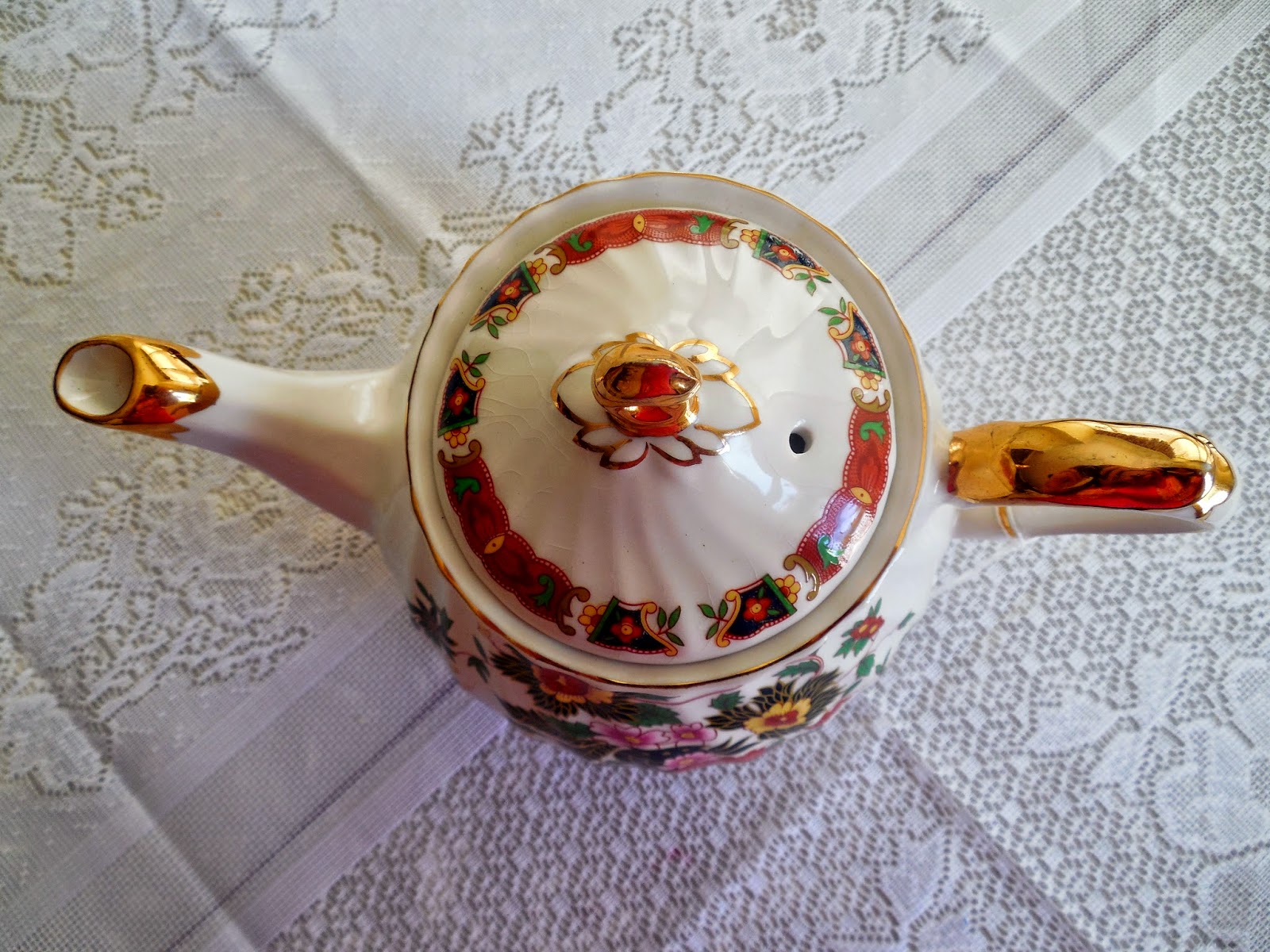 I think the pot has an oriental style design.  I have quite of bit of Asian décor in my house: 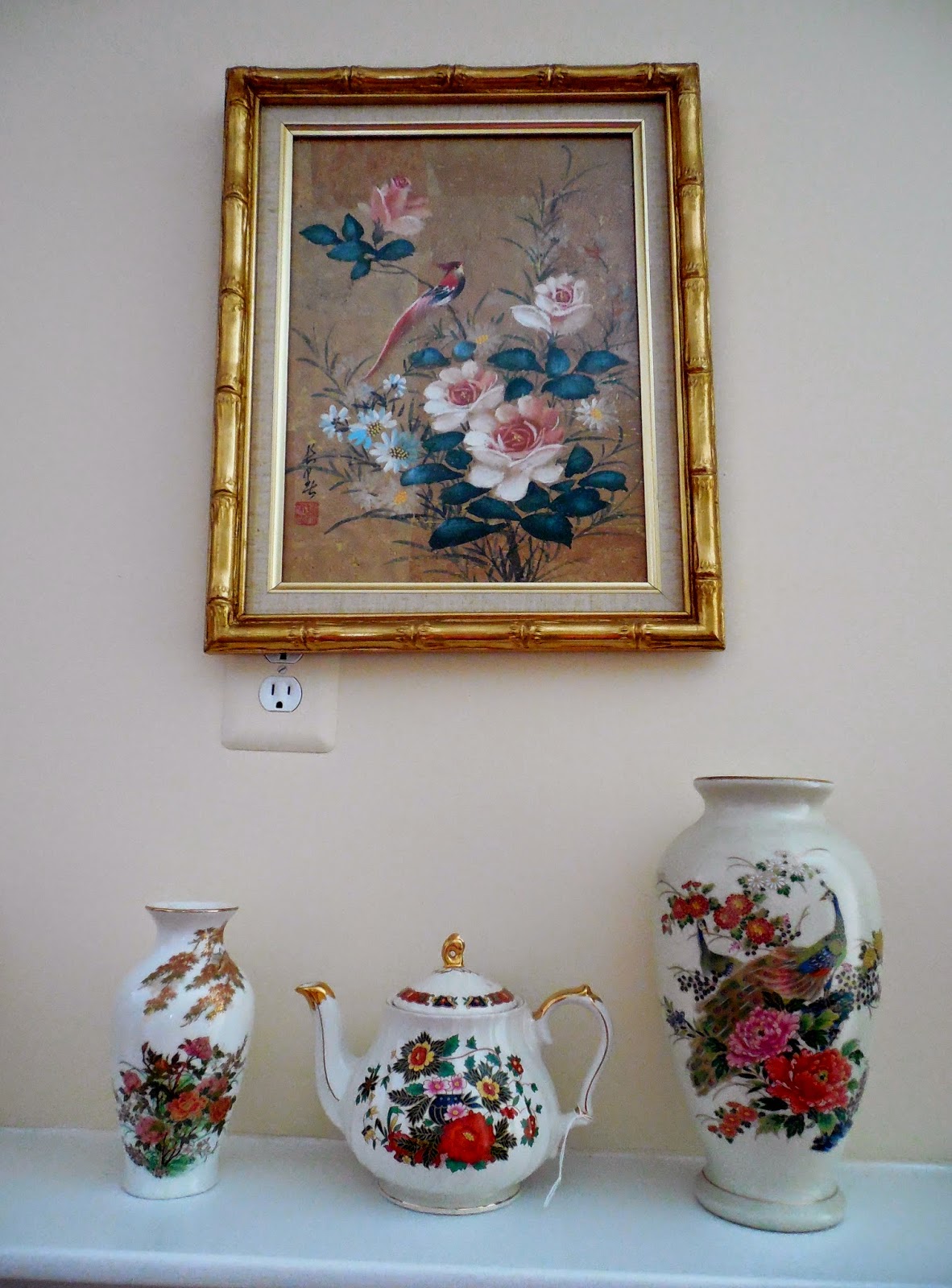