Tea and a Tour in Savannah, Georgia

This week we're traveling to Savannah, Georgia for a carriage tour, followed by tea in a very special house. 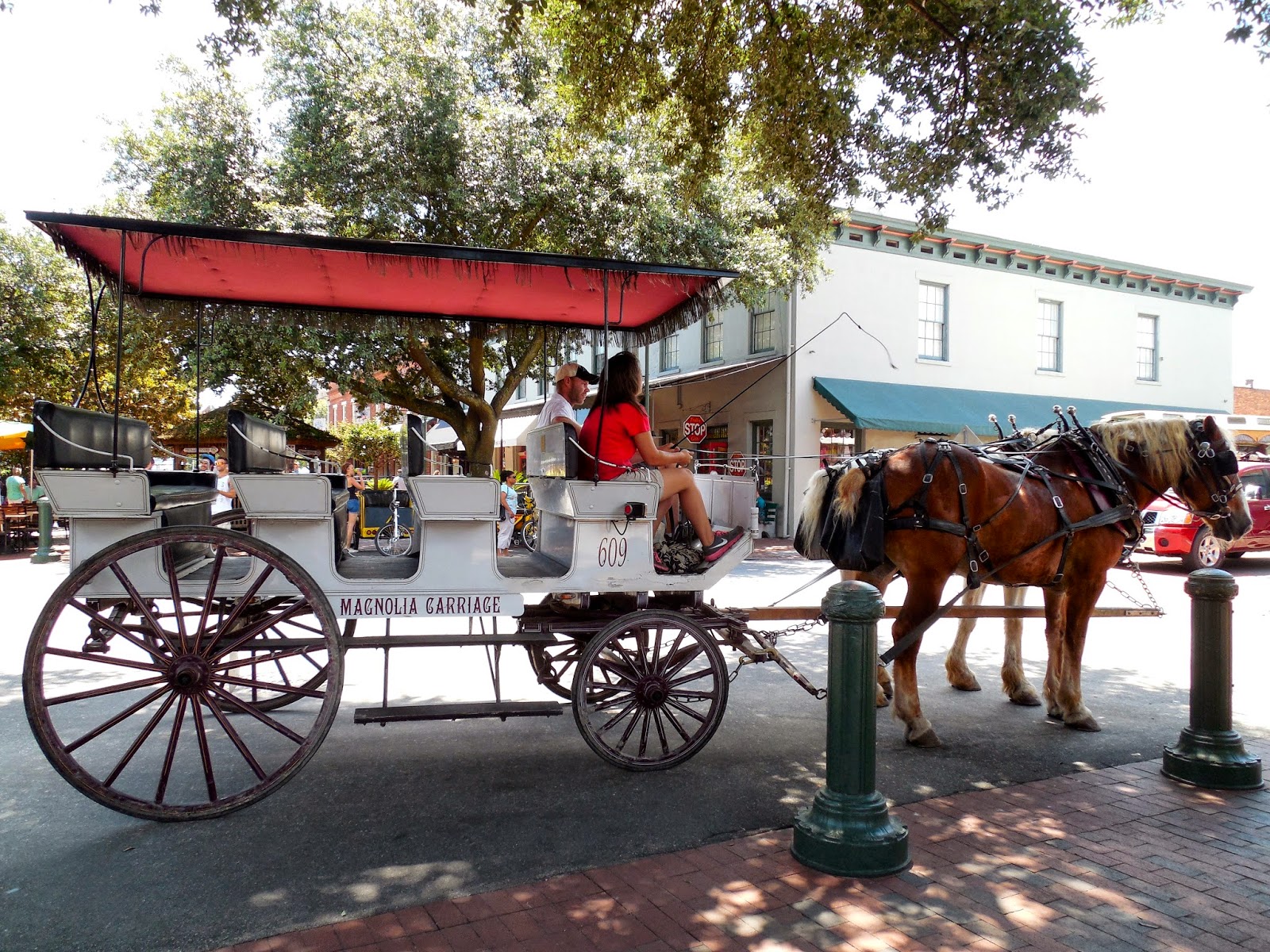 Savannah was a planned city before building began that follows a grid pattern.  As a part of that planning, the city is filled with little squares, including this one with live oaks draped in Spanish Moss. 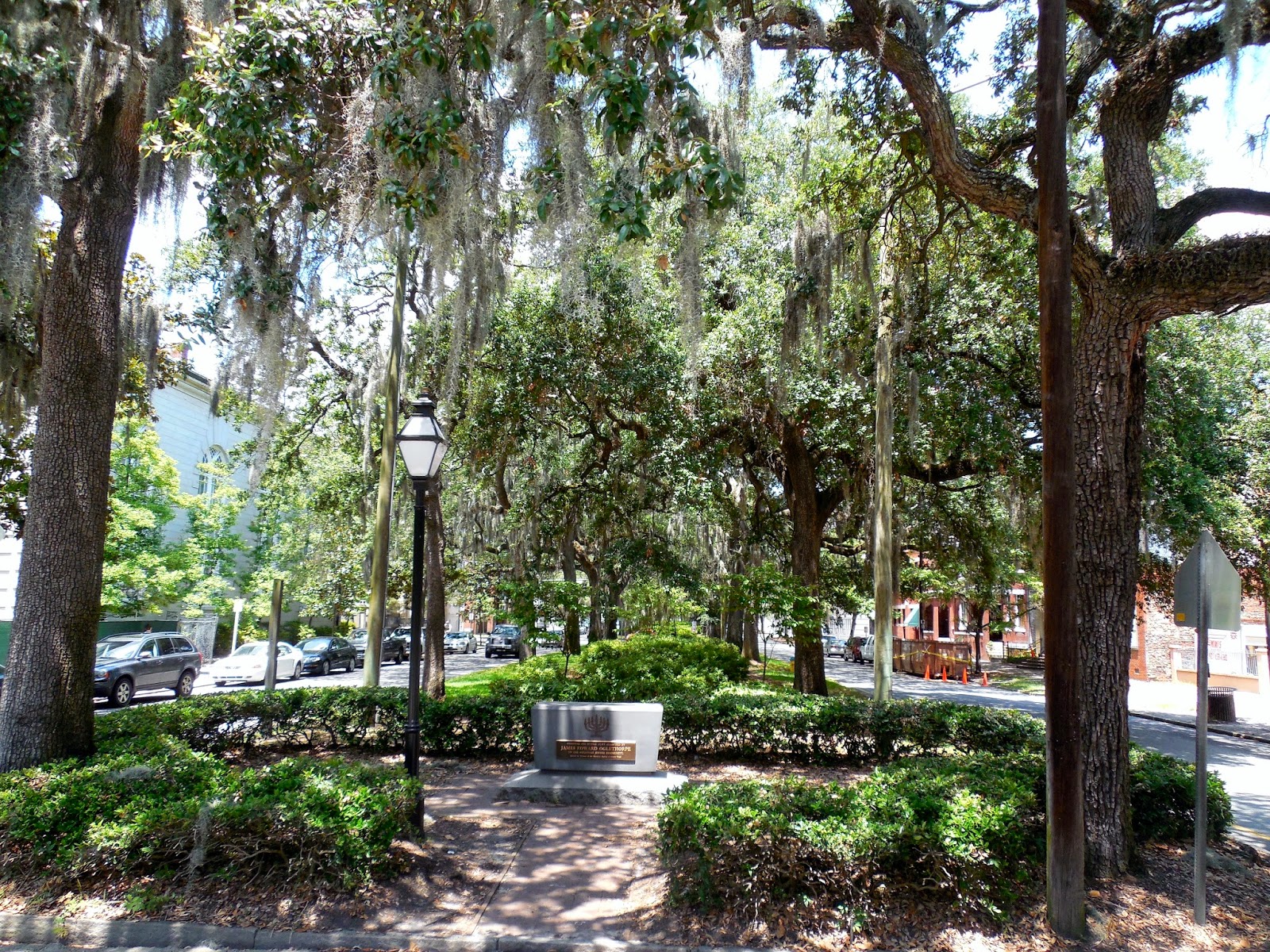 Here is another of the little squares, 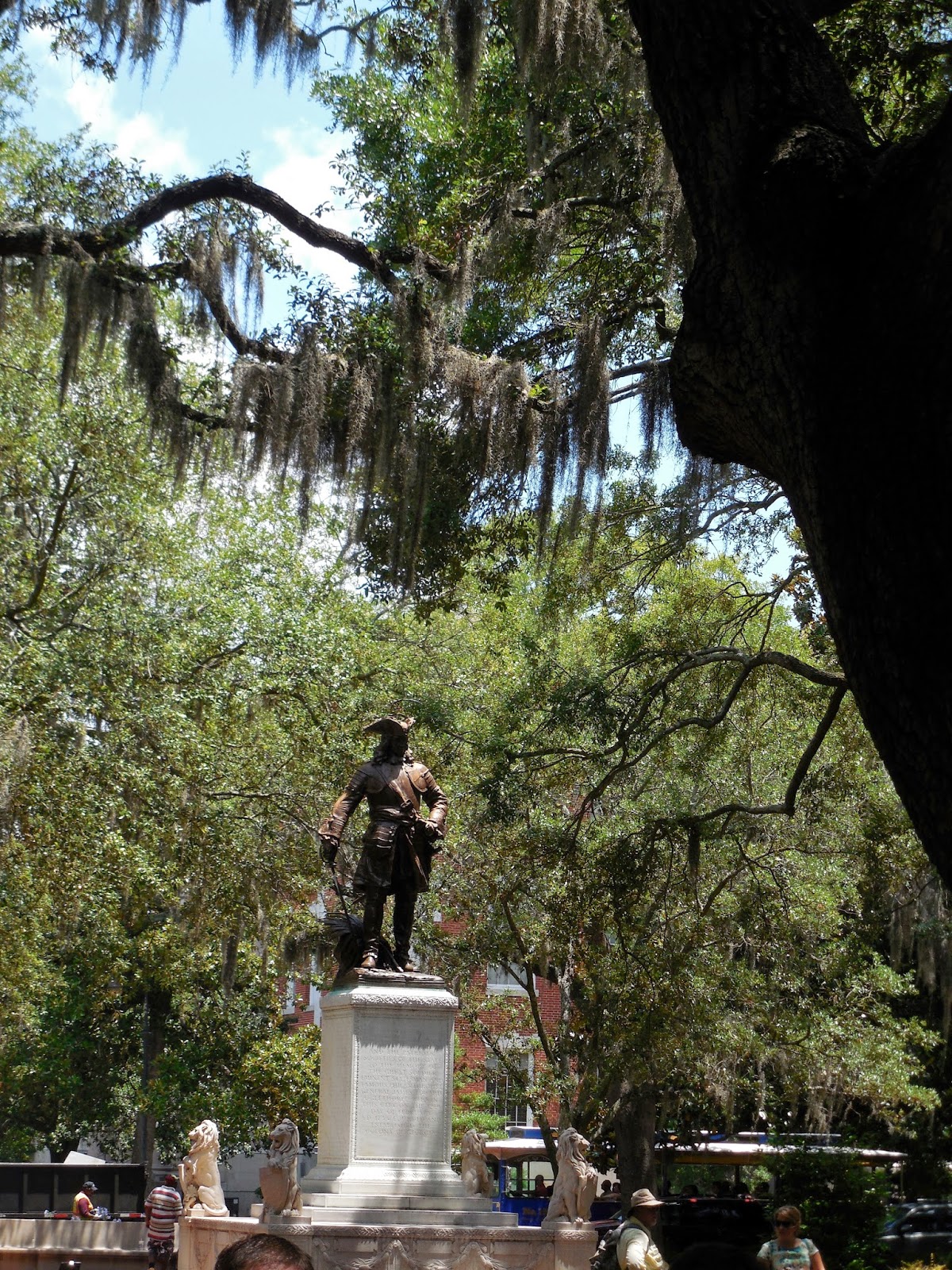 
that we passed on our way to see the Green-Meldrim House, an example of Gothic Revival architecture.  When General Sherman marched towards Savannah, the owner of this house rode out to meet him and offered Sherman his house as a headquarters.  At this home, Sherman wrote to Lincoln to offer him Savannah as a Christmas present.﻿ 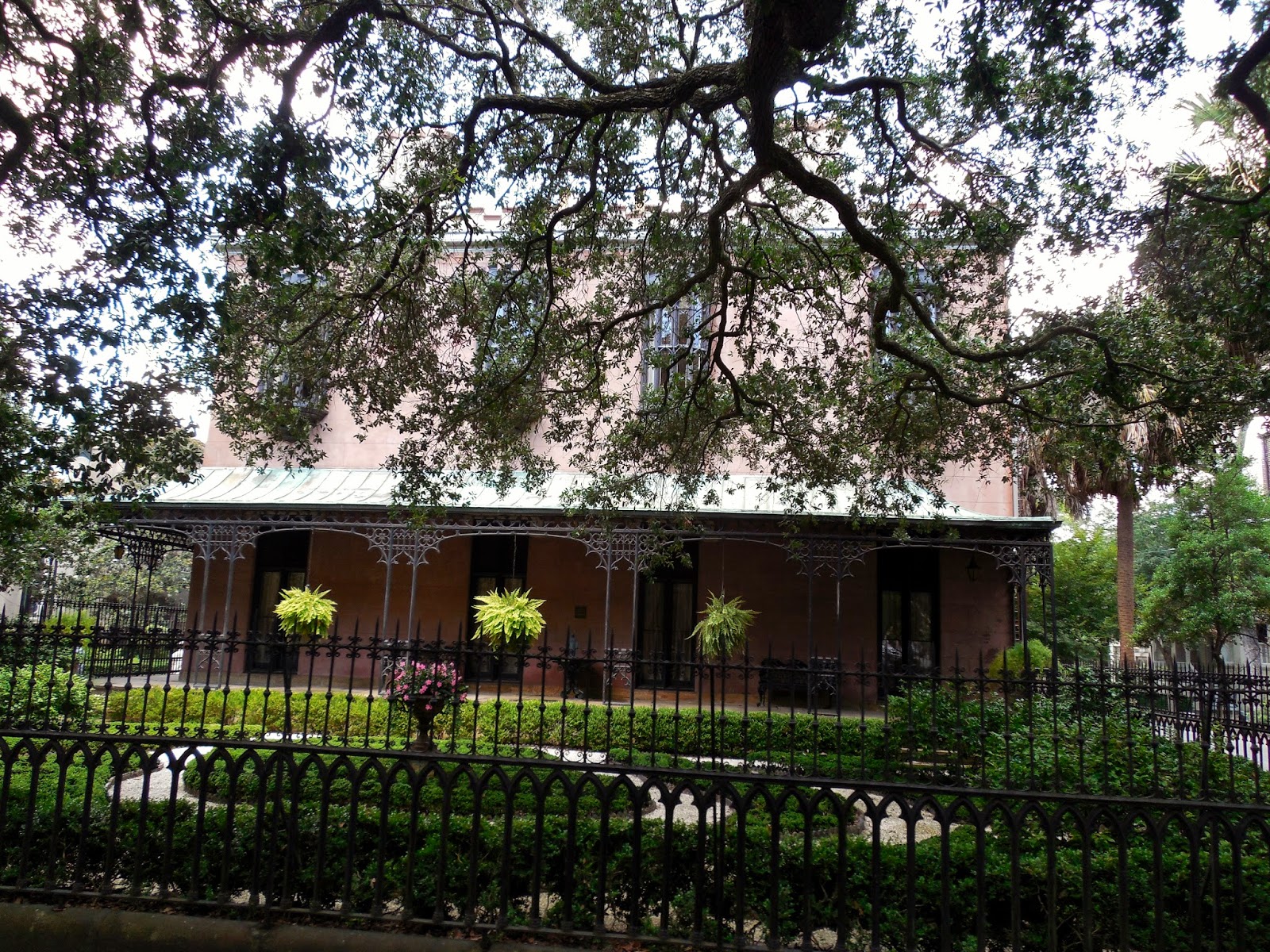 The Hamilton-Turner House, built in 1873, is nicknamed the Grand Victorian Lady.  This house is now a bed and breakfast.  ﻿ 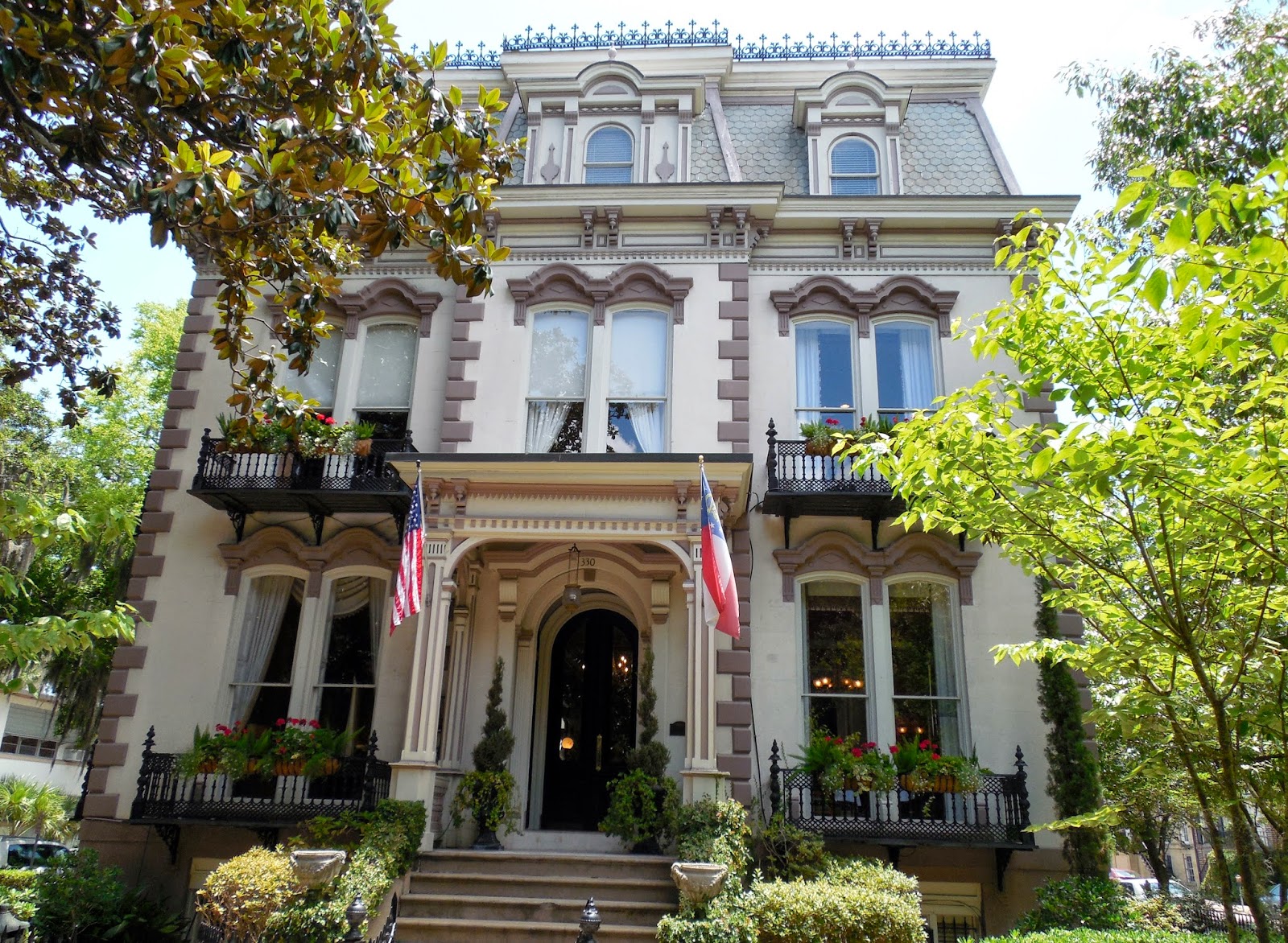 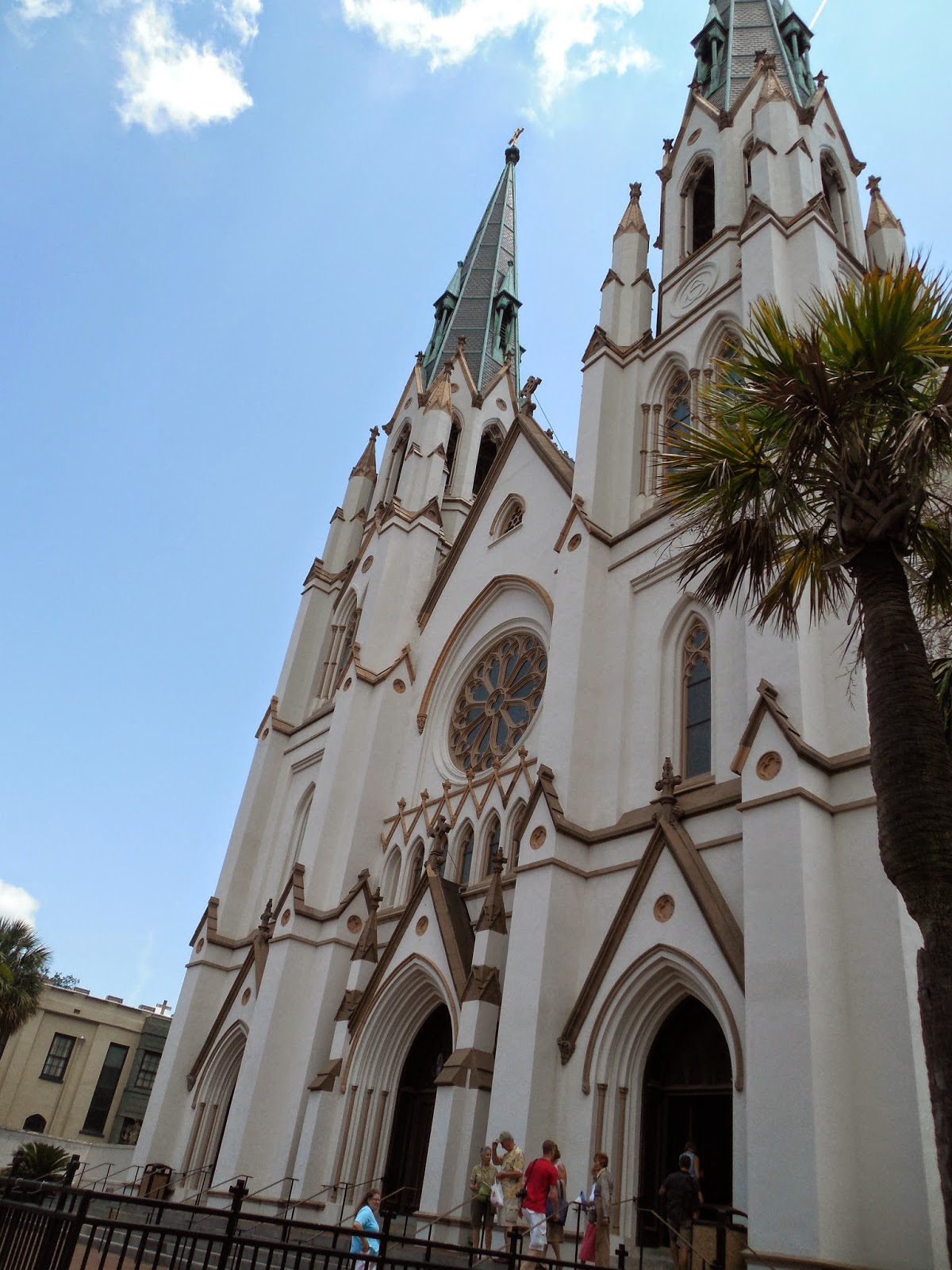 ﻿
As we continue up a few streets, 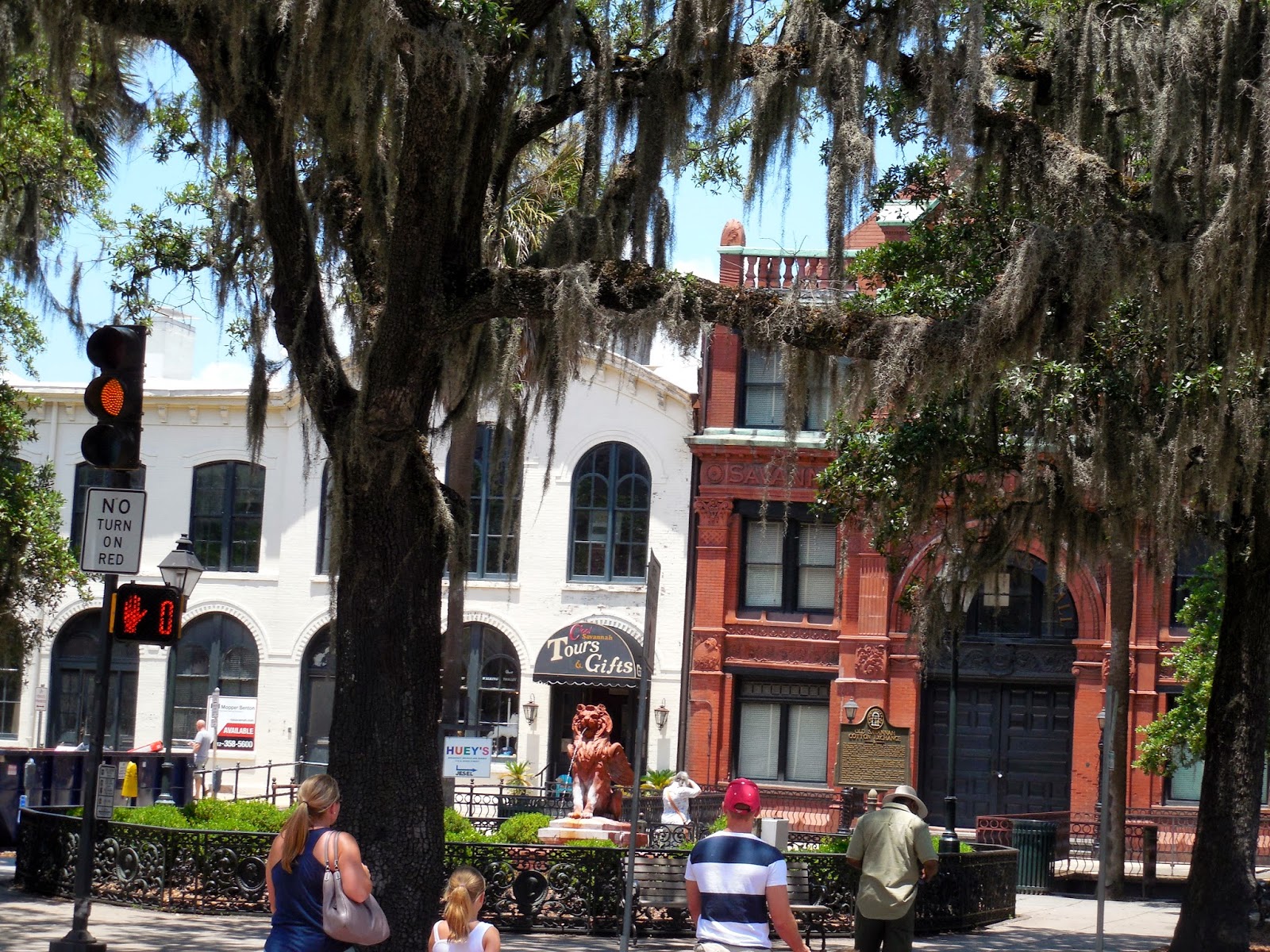 and past a few more squares, 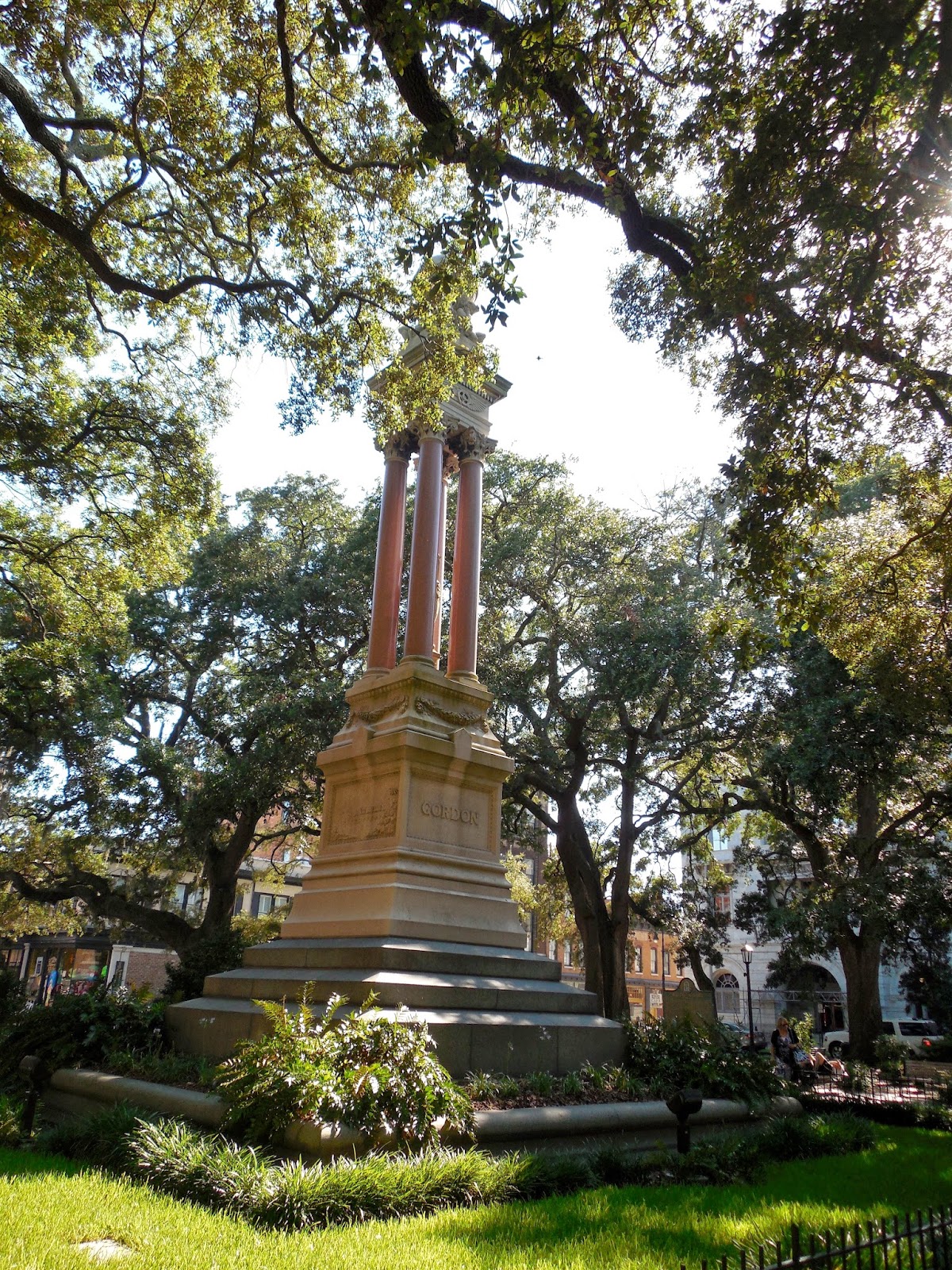 Until we reached the Owens-Thomas House.  Construction began on this house in 1816 and the major portions were finished in 1819. 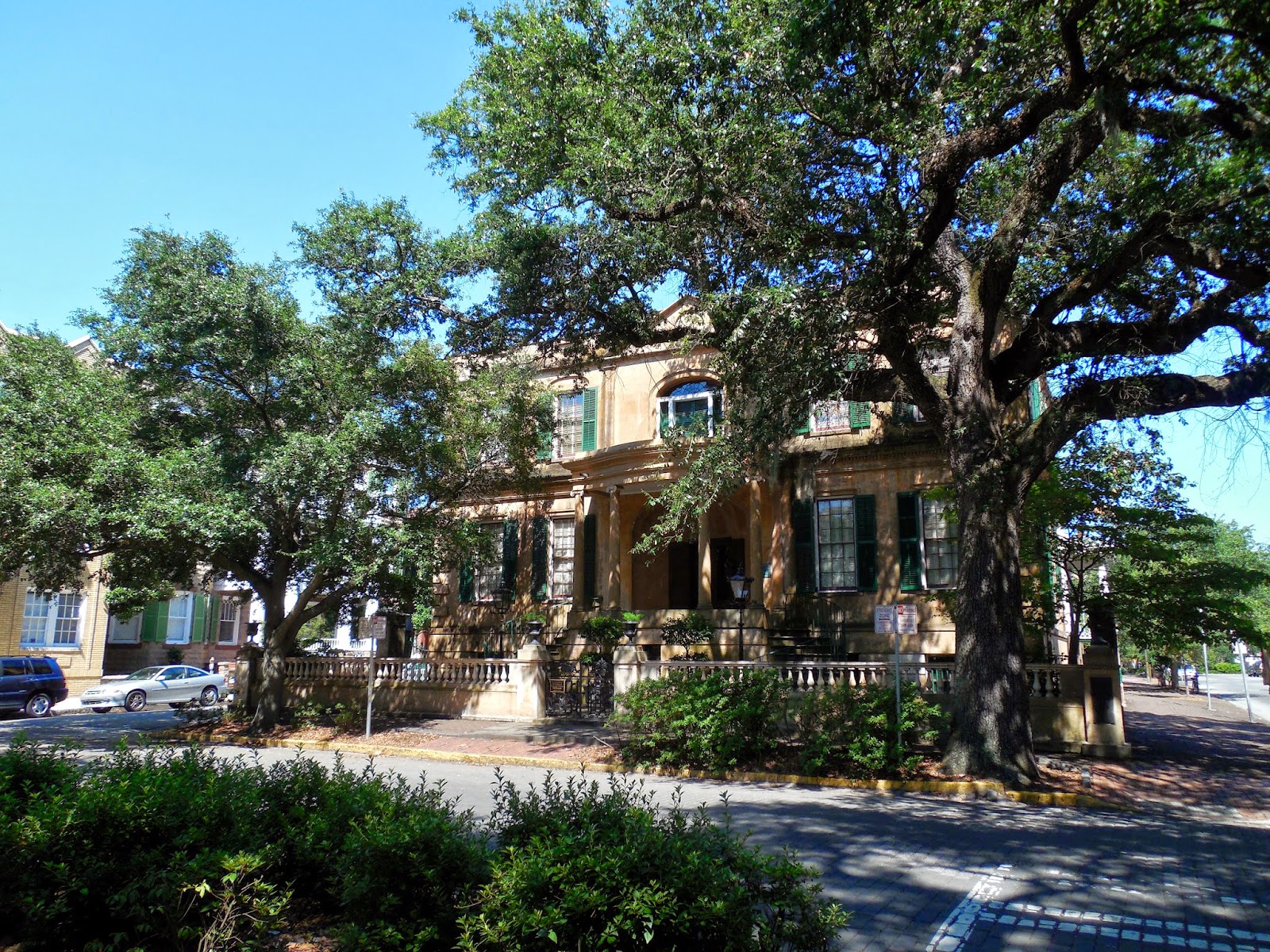 Ladies go up the right side and gentleman the left--we wouldn't want the men to see a flash of ankle and have to propose now would we? 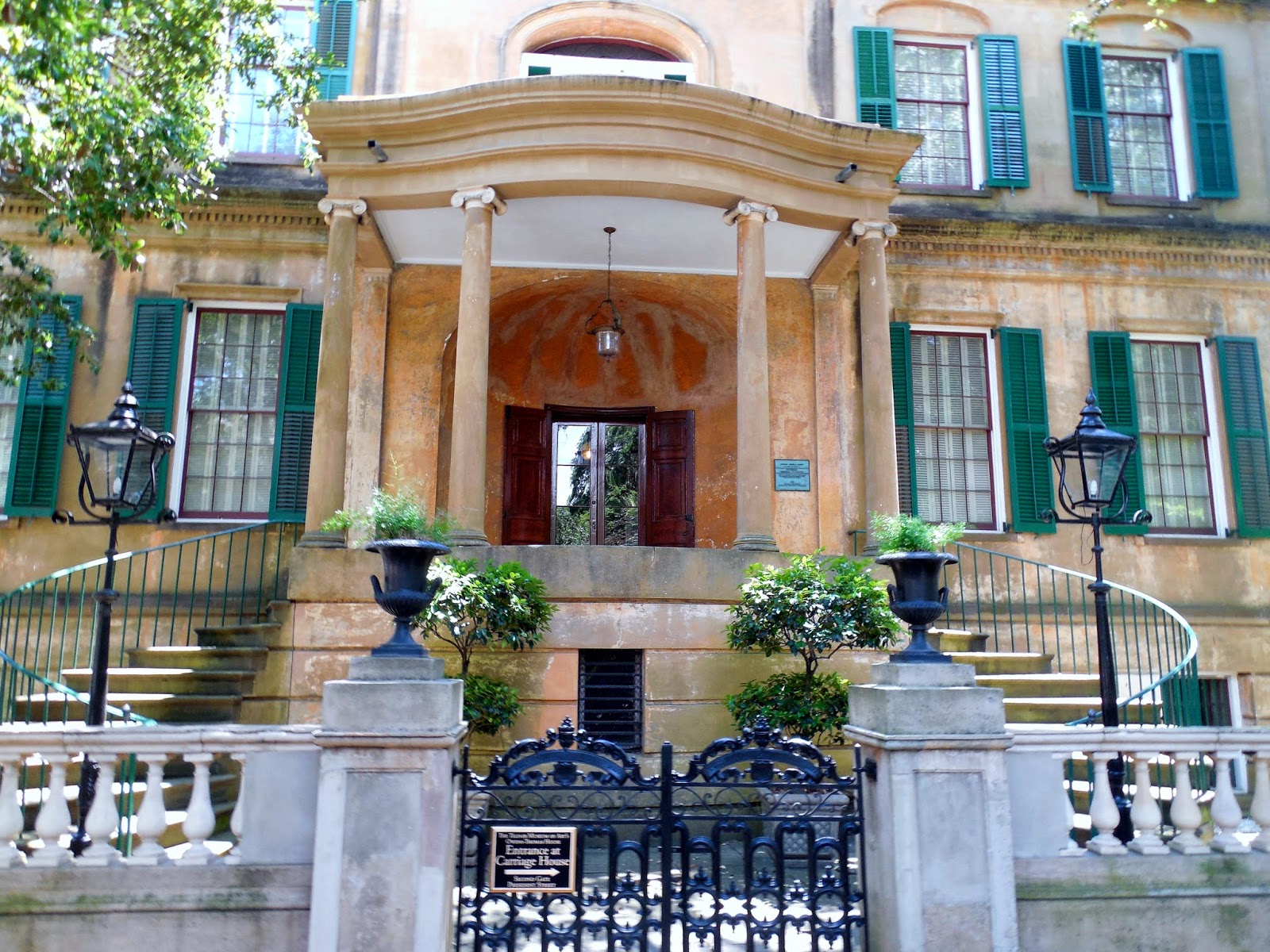 After a long day of touring Savannah, are you ready for a little tea break? 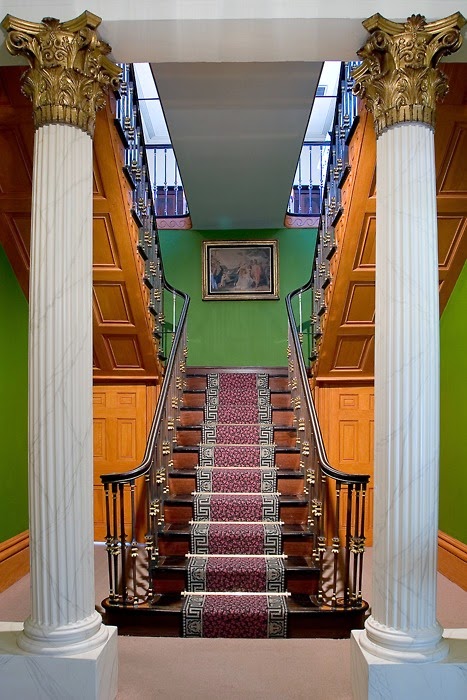 (picture of staircase from the internet.  The design was very inventive--brass inlays are in the stairs and along the banister to reflect light from a candle at night).﻿

First we pass through this beautiful dining room with its curved walls, 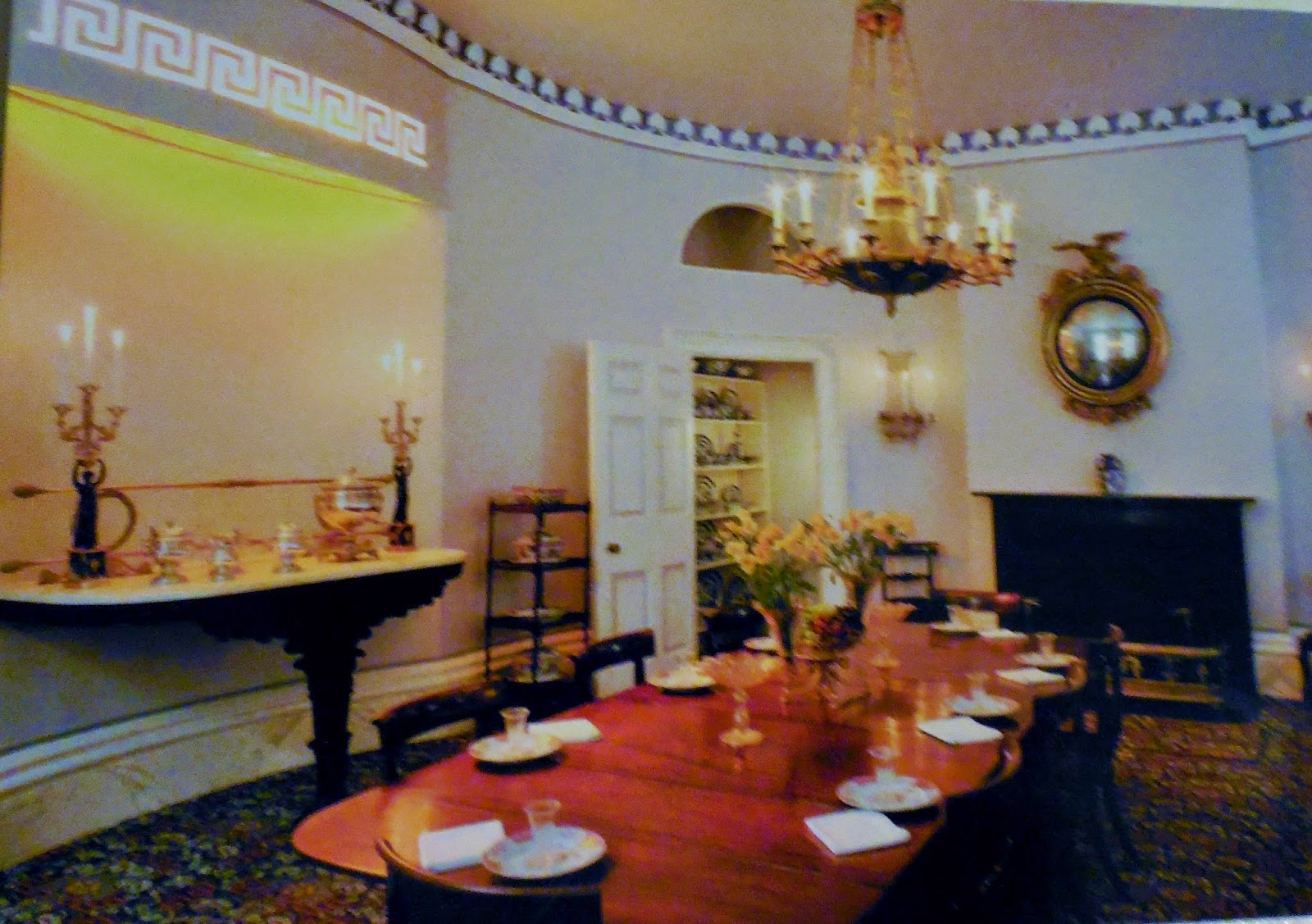 before reaching the drawing room.
﻿ 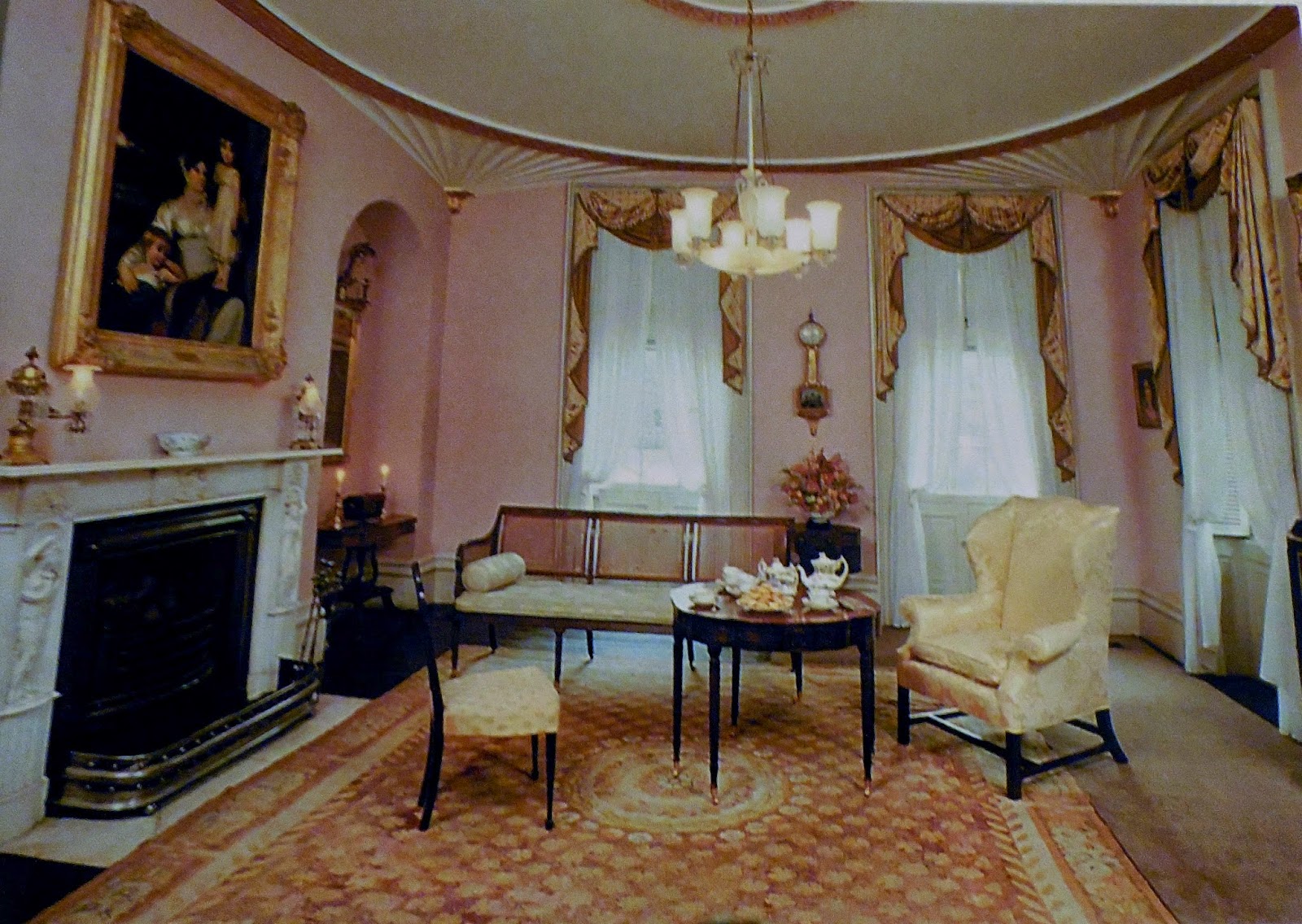 This room is very feminine with its pink walls and drapes.  The ceiling looks round, but if you look closely you'll realize it is an illusion--the room is actually square with plasterwork added to the ceiling to make it look round.
Please have a seat in the drawing room while I pour the tea. 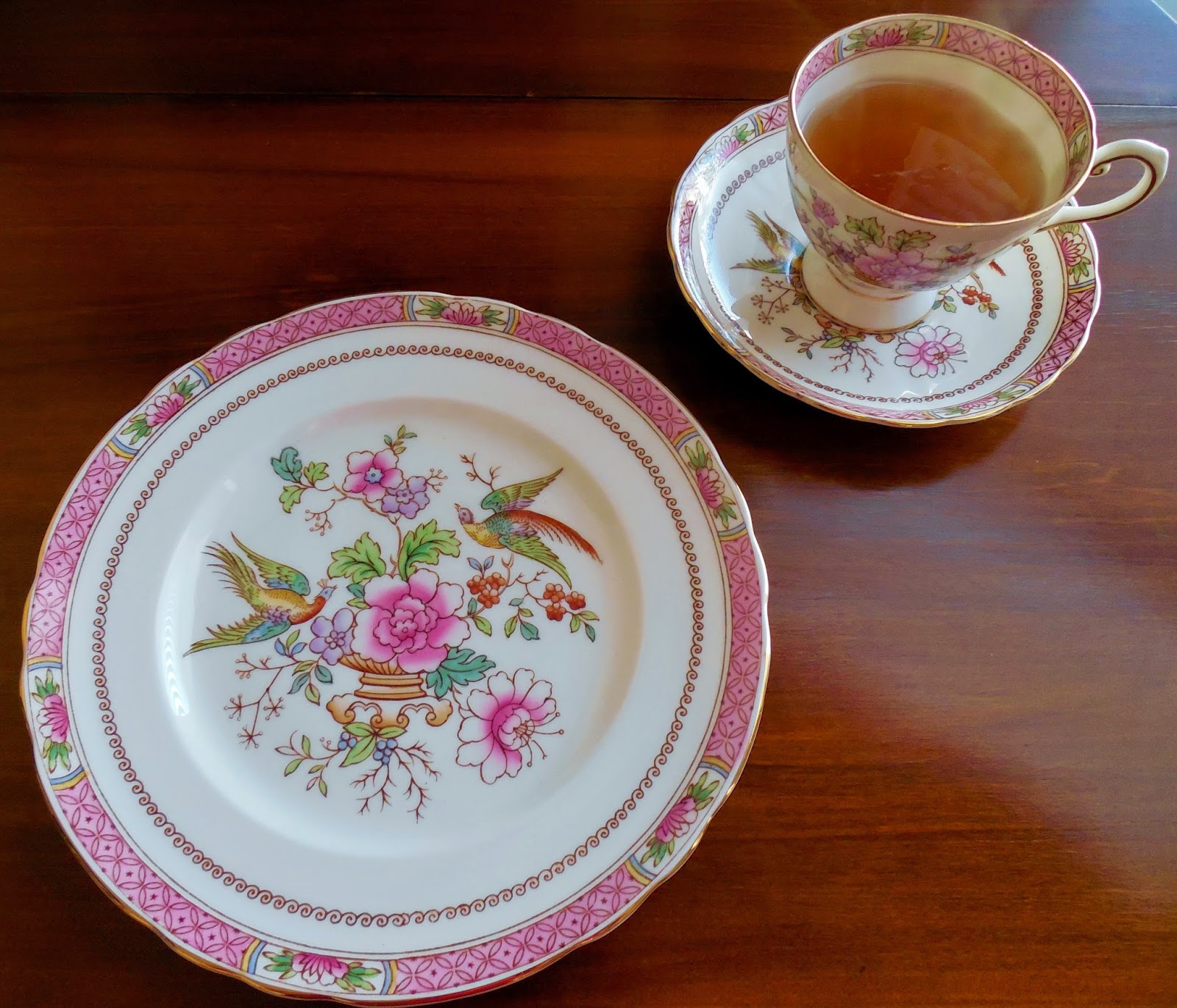 I learned in a recent issue of TeaTime that in the early 1800s people would not put a tablecloth on the table, but would instead put the dishes directly on the wood. 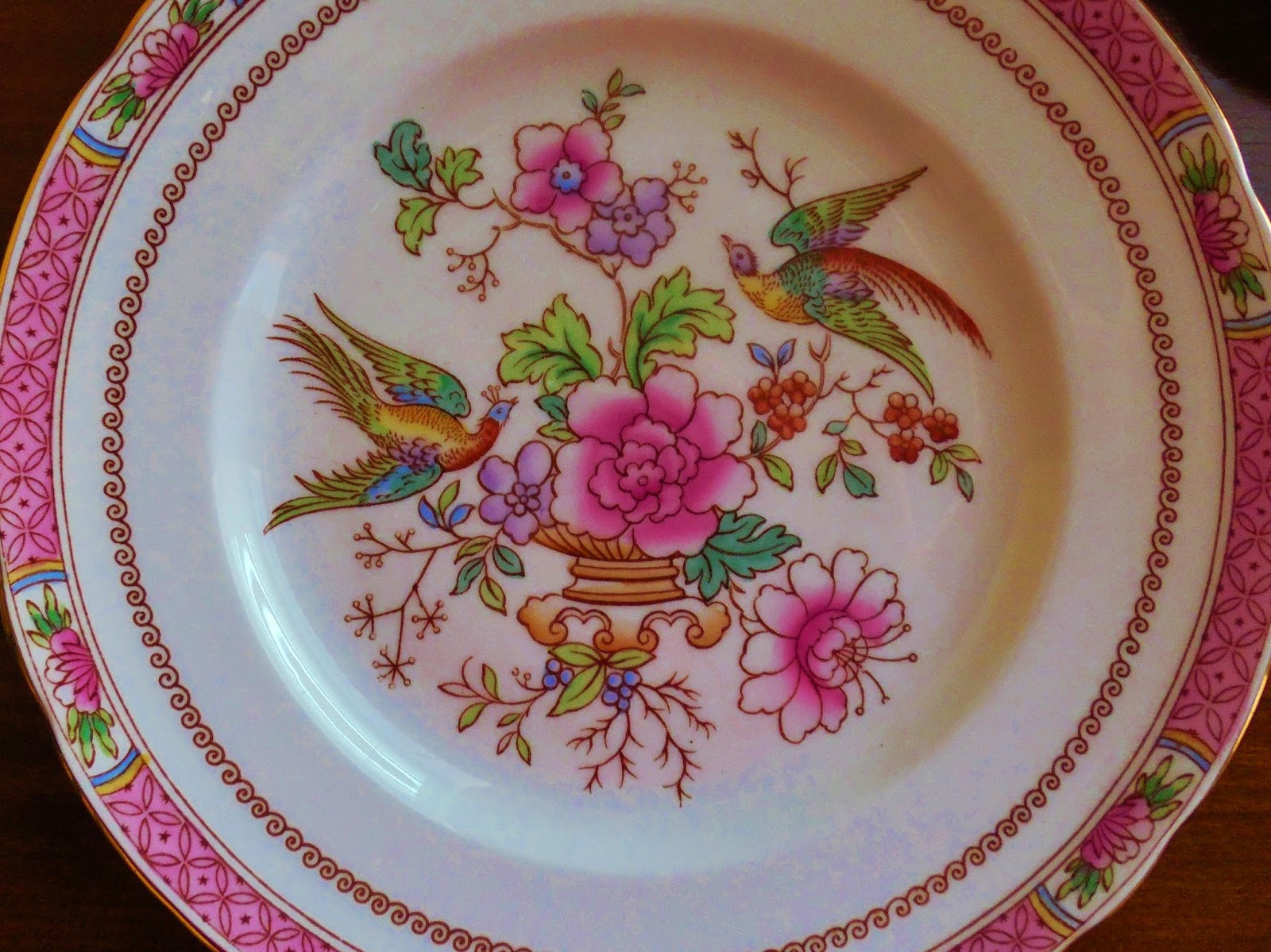 This pattern reminds me of some of the import china I saw during this trip.  It has the "fantasy birds" and is even pink like one of the patterns I saw.  This set is made by Royal Chelsea.﻿ 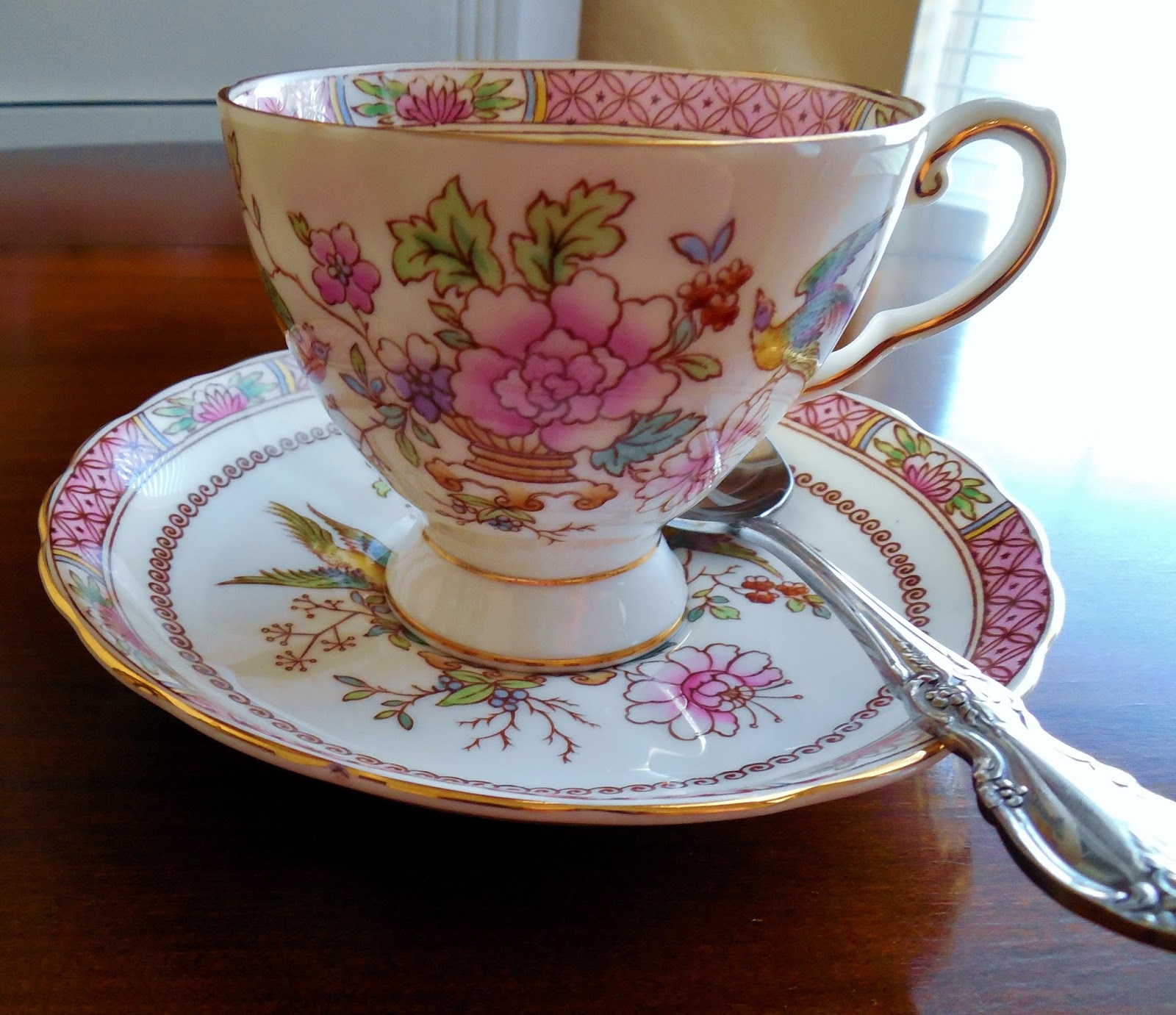 With our tea, we are having some peach cutie pies with pecan crumb topping.  When in Georgia... 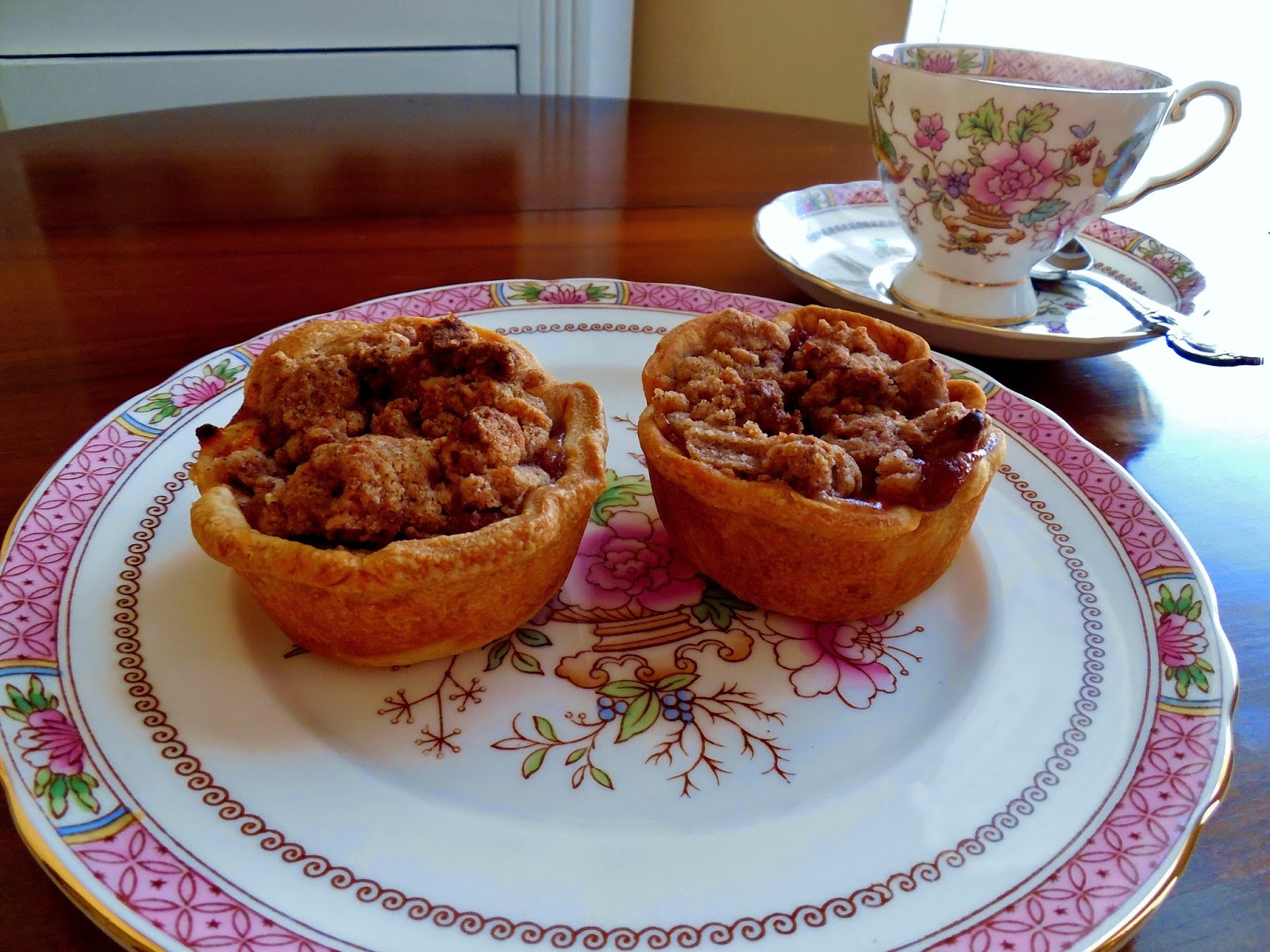 
After finishing our little tea break, we head through the rest of the beautiful house and learn it was one of the first houses in the U.S. to have running water--even before the White House.  The house was built with cisterns on different levels in the house to collect rain water that would be collected on the roof.  There were showers, tubs, and sinks that would fill with water through the use of gravity from the cisterns in the floor above.  ﻿

After traveling through the rest of the house, we walk out the back and into the beautiful garden. 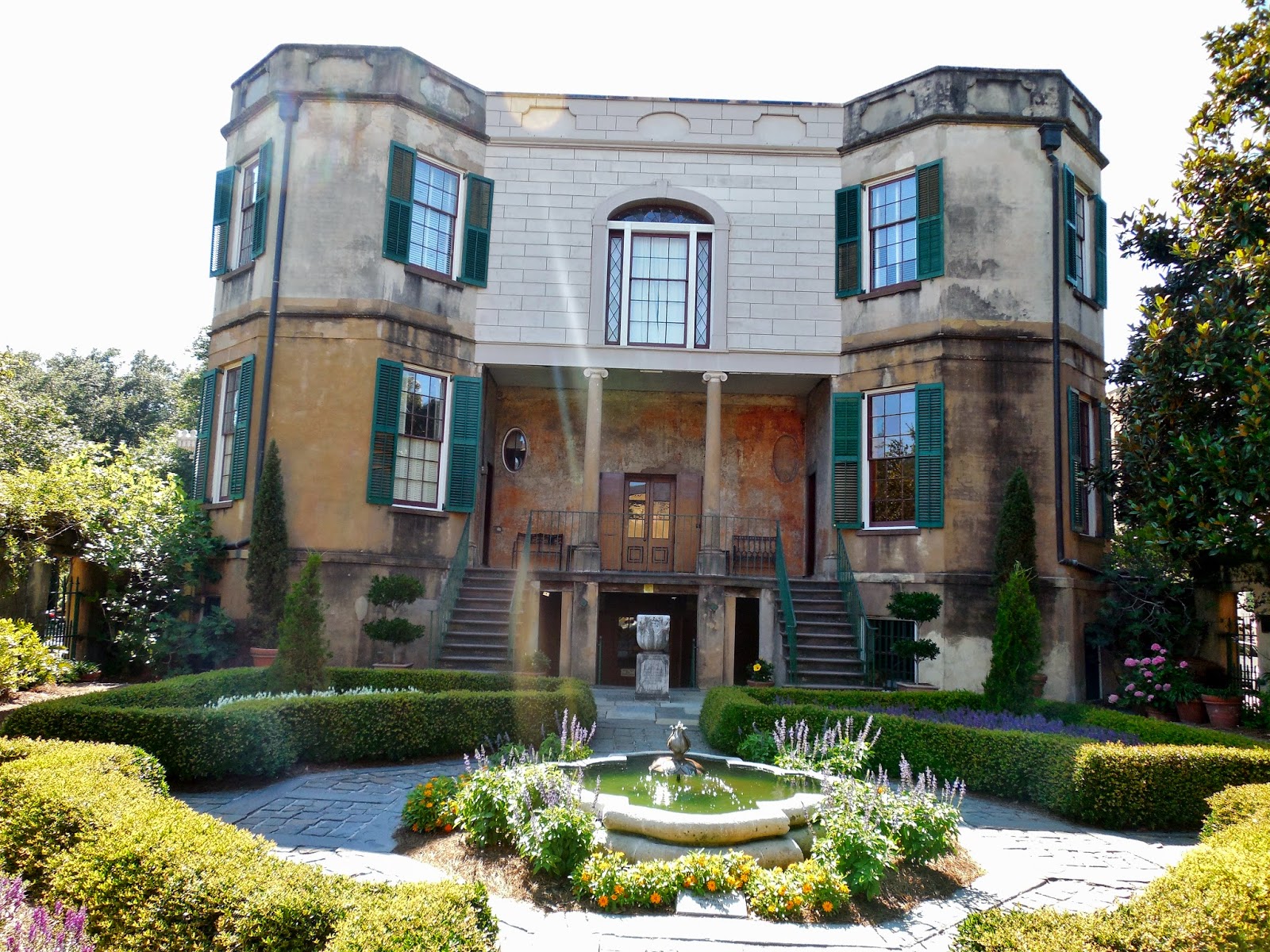 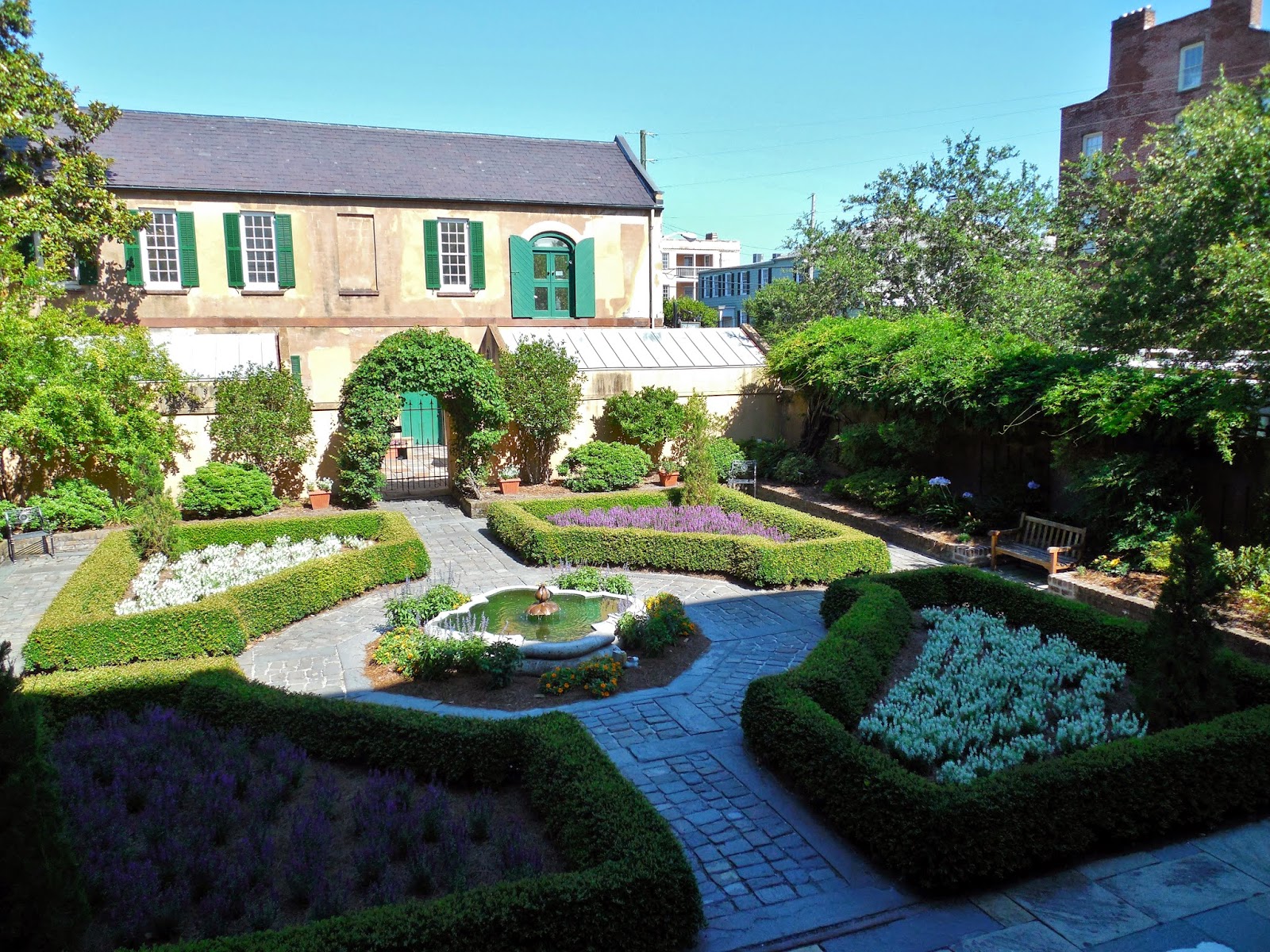 Before leaving Savannah, why don't I treat you to dinner at the Lady and Son's, Paula Deen's restaurant? 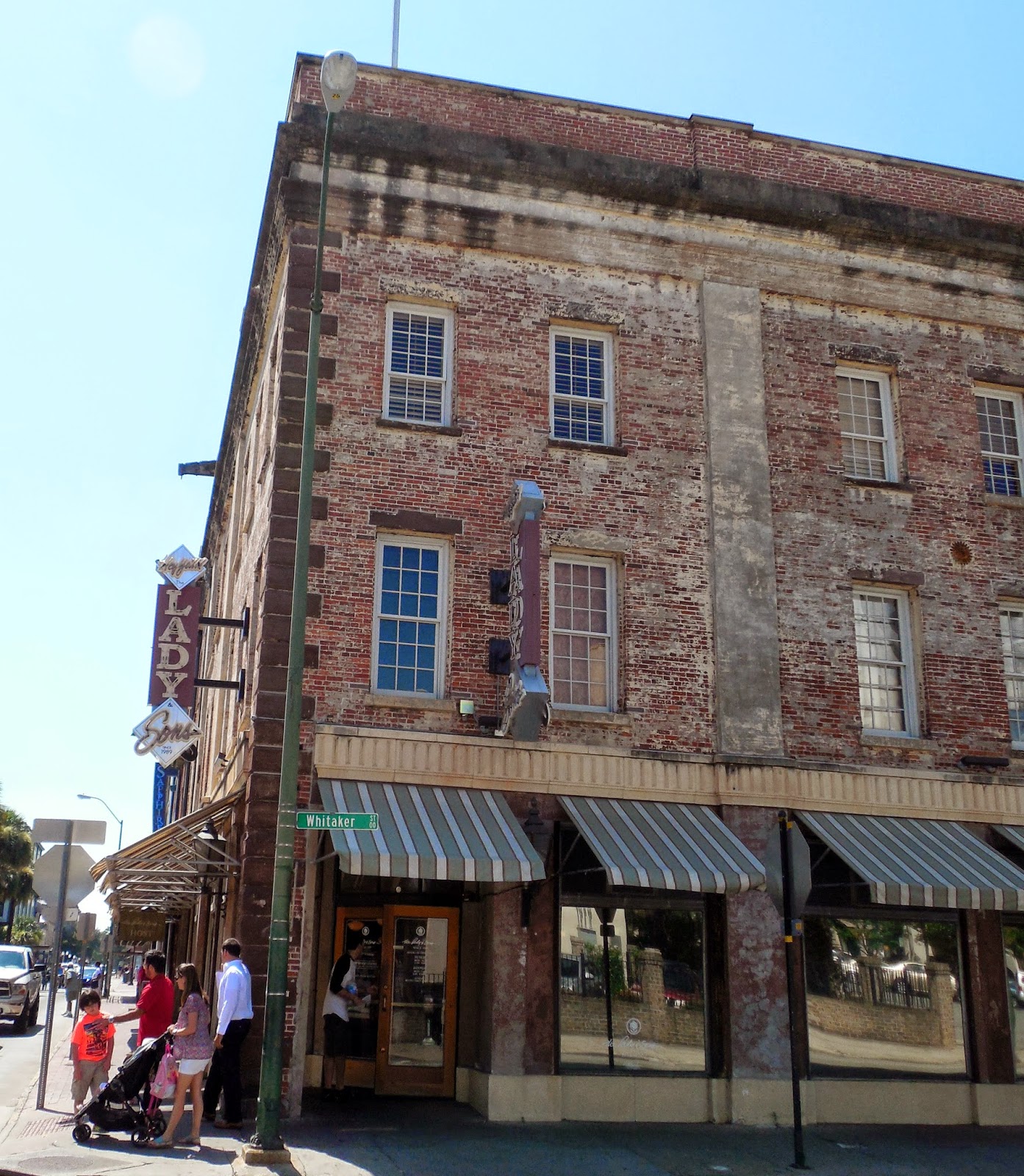 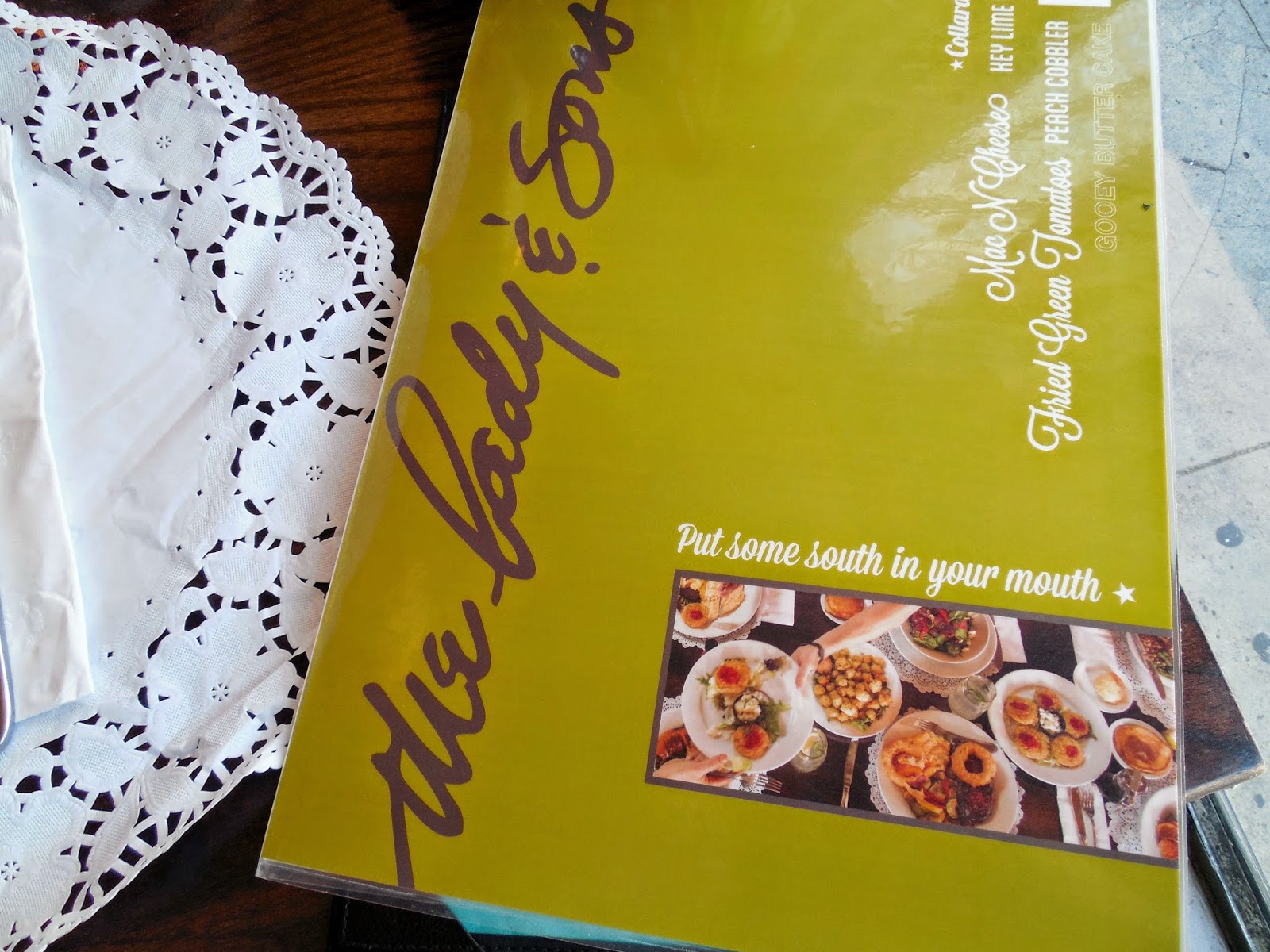 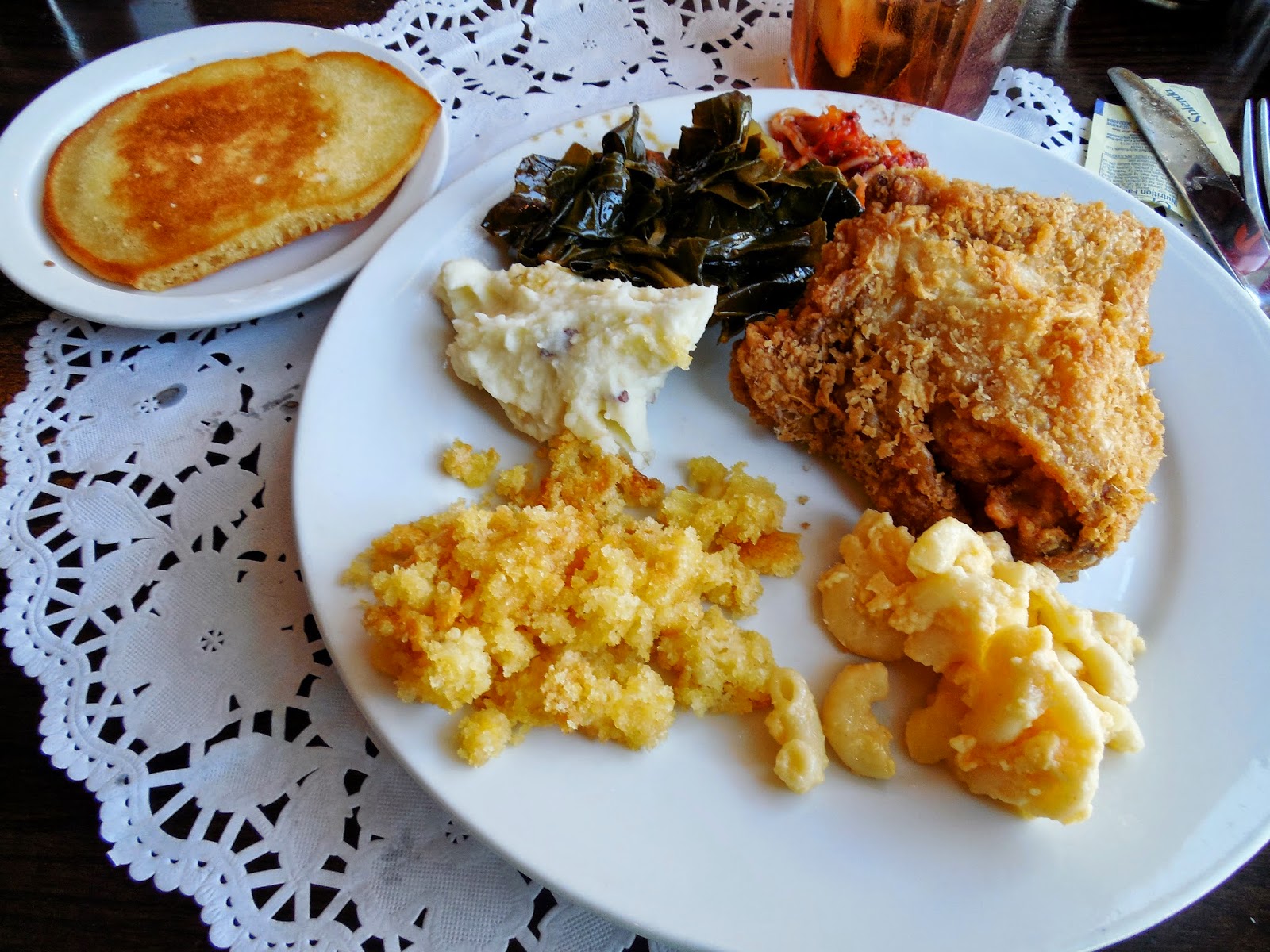 Paula's cheese biscuits and a corn bread hot cake came with the meal, and I ordered an ice cold tea of course, complete with fresh mint.
﻿ 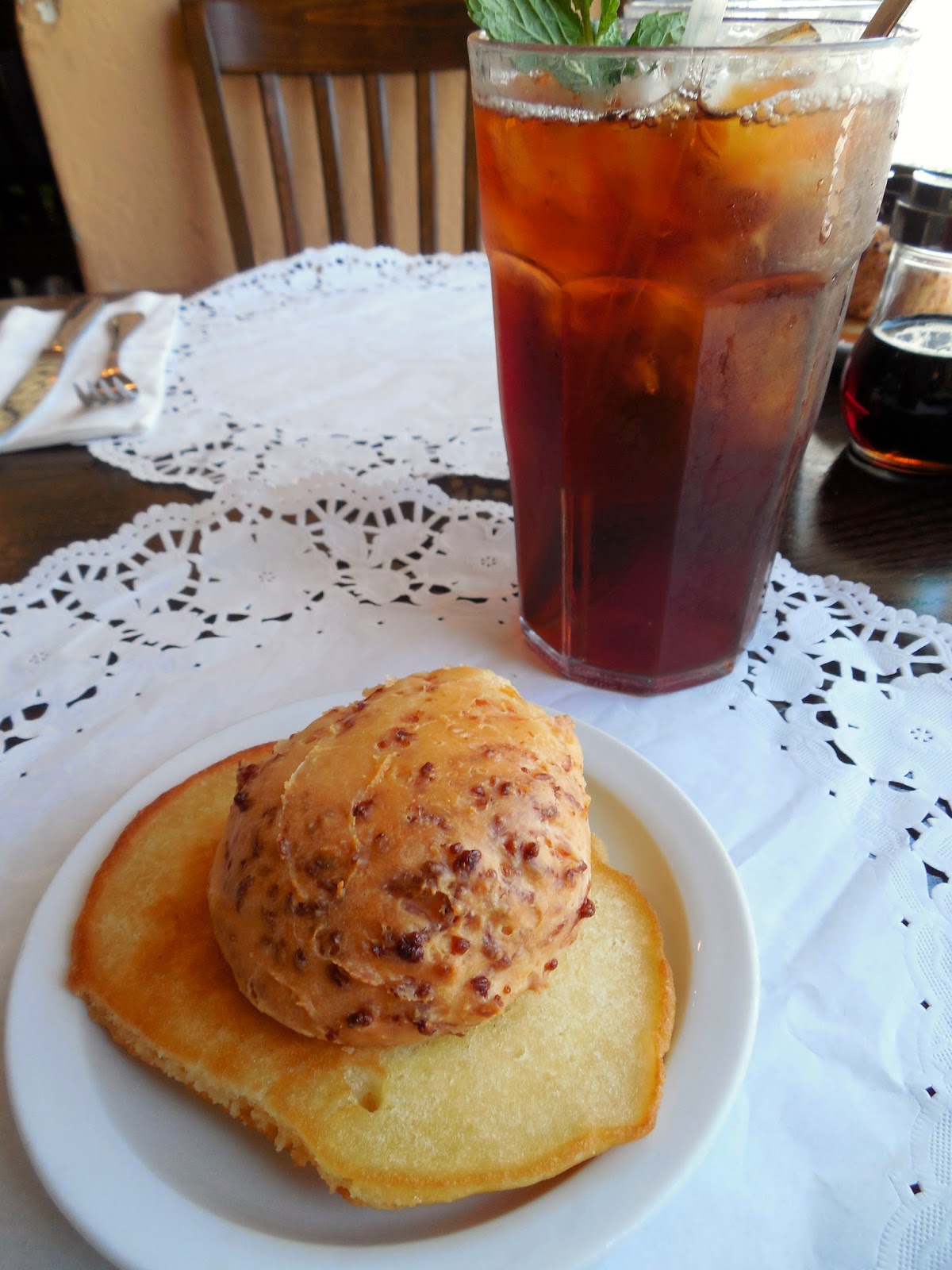 ﻿
Thanks for joining me this week.  Unfortunately, you really couldn't stop for tea in the Owens Thomas House, although it would have been wonderful to take tea there!
I'm joining these tea parties this week:
Tea Time Tuesday at Rose Chintz Cottage
Bernideen's Tea in the Garden
Tea Cup Tuesday ~ http://www.marthasfavorites.com/
Tuesday Cuppa Tea~ http://www.antiquesandteacups.info/
﻿