So...on to the main reason for my trip to Asheville...the Biltmore itself!  George Vanderbilt visited the Appalachians with his mother and decided that Asheville would be the perfect location of his country home.  To that end, he commissioned construction on the Biltmore, which was  completed in 1895.   The house is a mix of an idealized English manor home and the beauty of a French chateau, with the "modern" technology of a gilded age home. 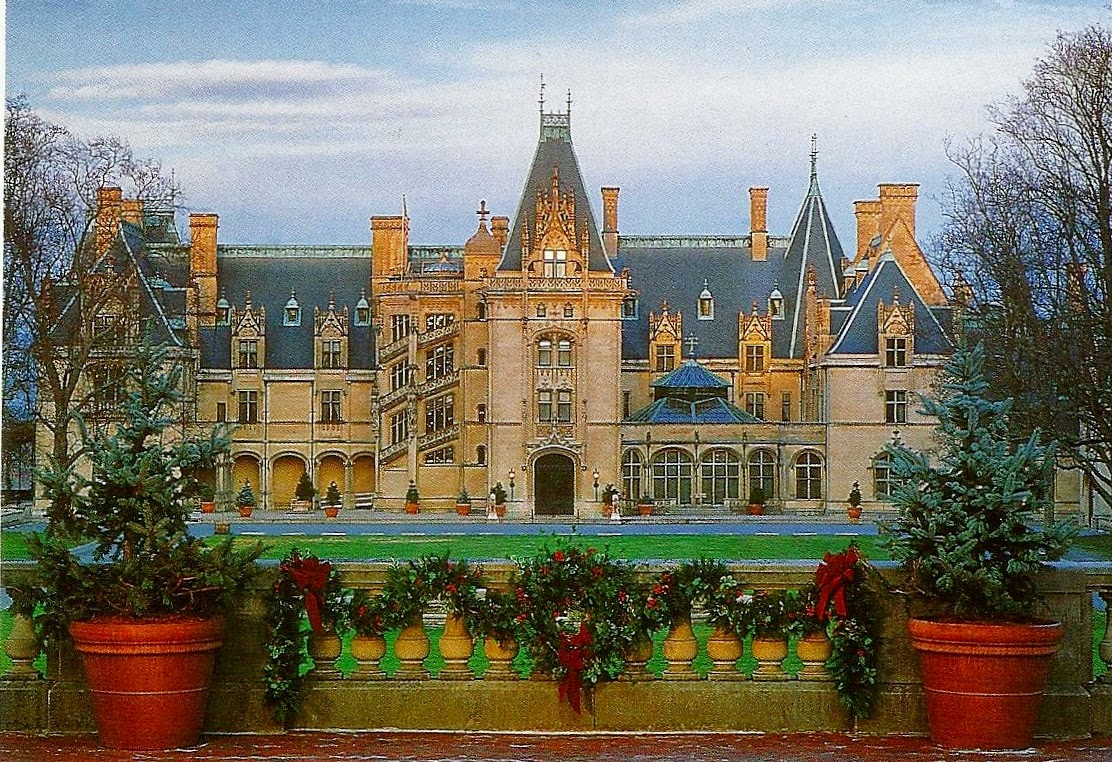 Unfortunately we couldn't take pictures inside the house, so most of the pictures I will be sharing are from postcards or are some pictures that we purchased during our trip from the official photographer.  I took two tours during my visit, one during the day, and one at night.  Both were great and allowed you to see the décor in different ways.  The nighttime tour (called the candlelight tour) was the perfect fodder for daydreams of being in the house when it was first opened, which, by the way, was for a Christmas party.

As we approached the entrance, we passed by two festooned lions, 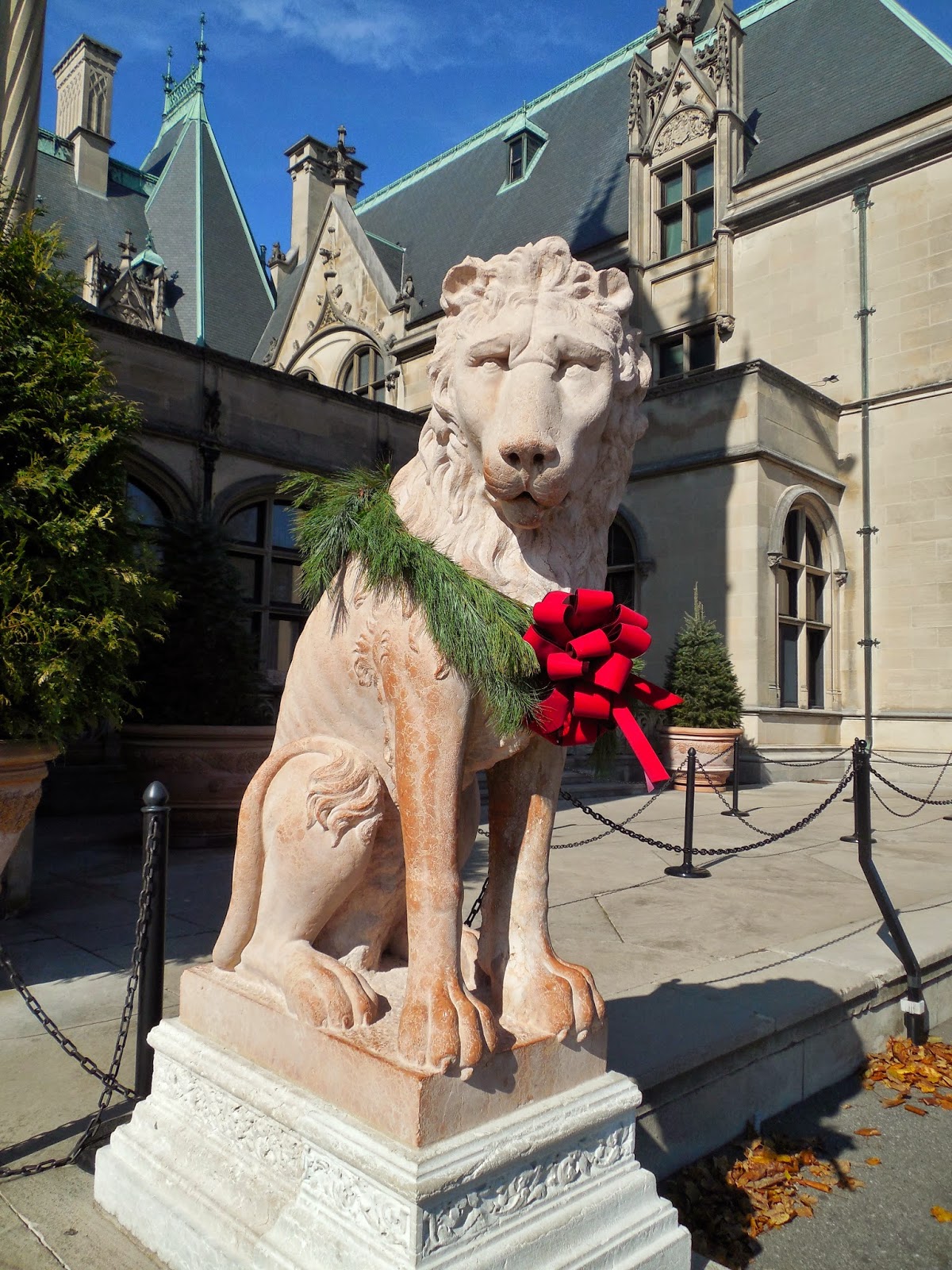 and into the main entryway. 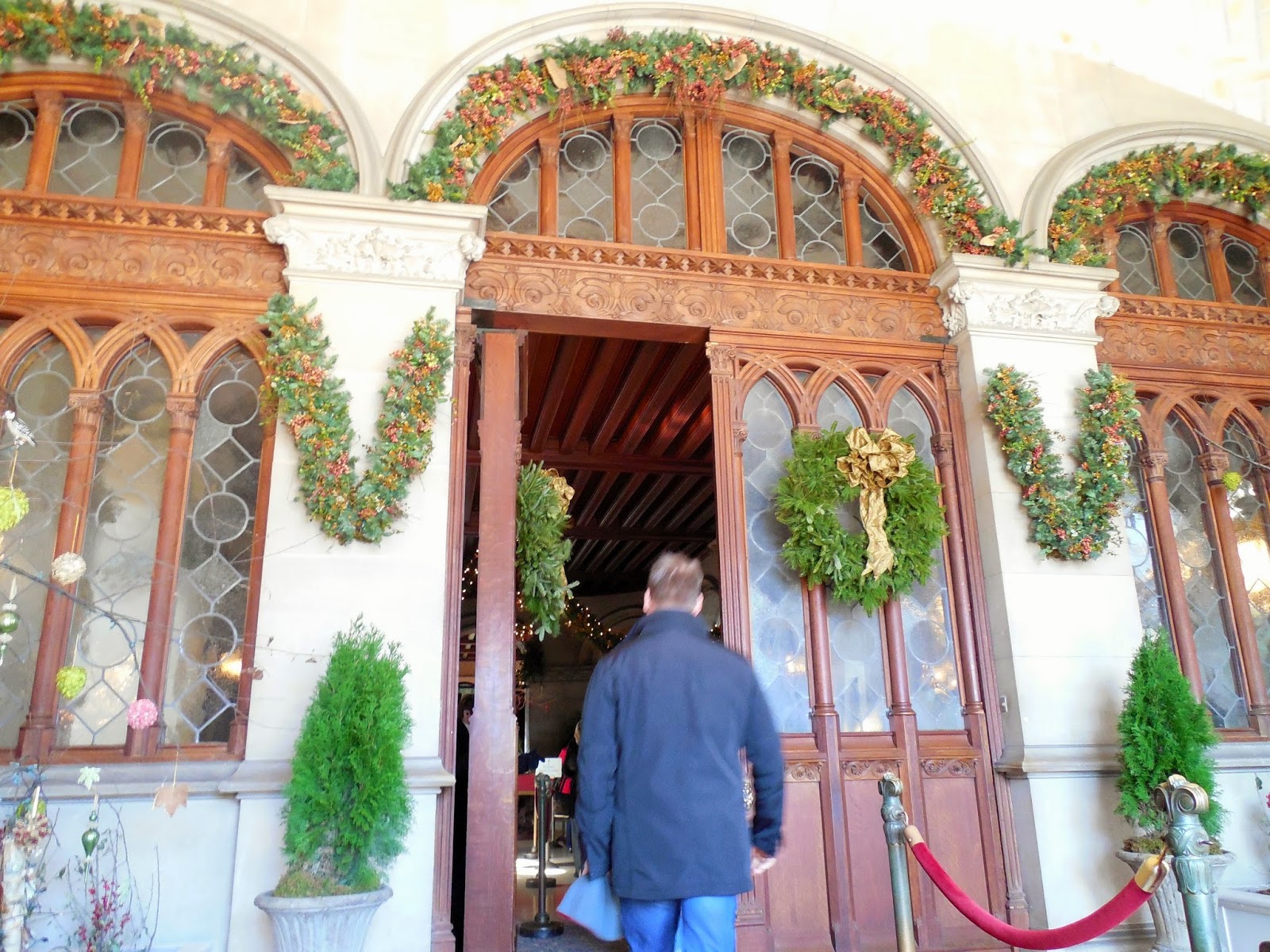 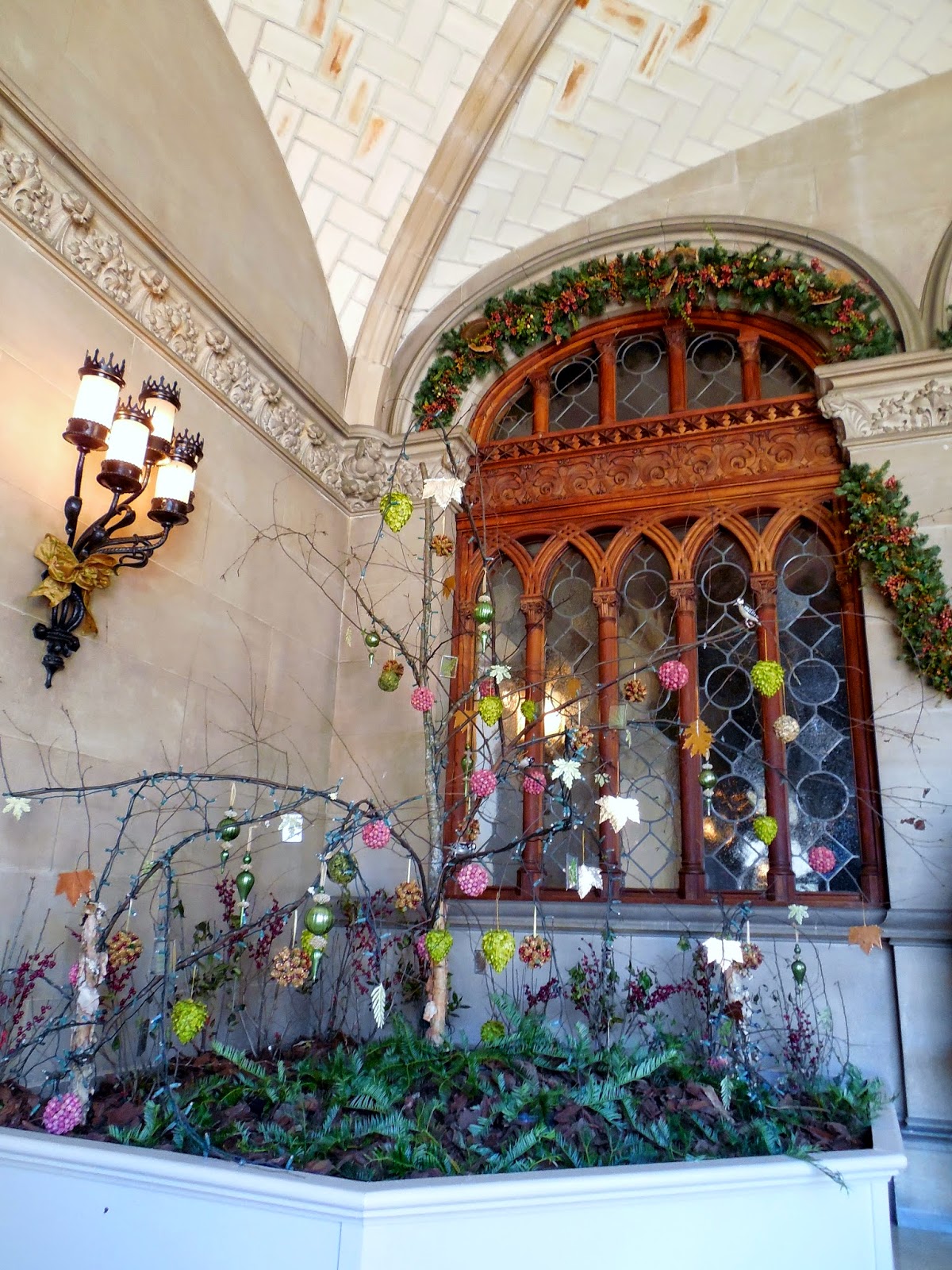 The house was already decorated for the holidays, with a multitude of trees and garland.  As you enter the mansion, there is a solarium with many indoor plants.  During the candlelight tour there was a choir singing and bells, which echoed through the house as we toured.

Off the solarium is the first of the rooms I will be sharing, the banquet hall. 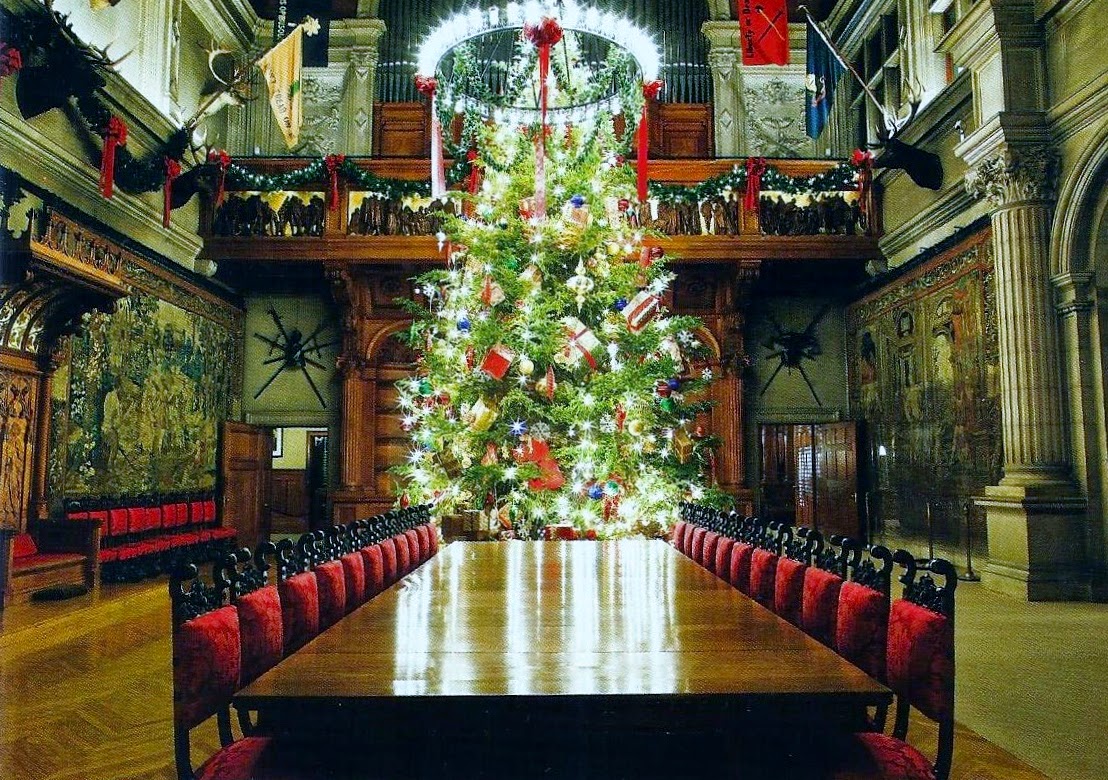 As you can see, on one end of the room was a huge Christmas tree.  Boxes were hung on the tree as they would have been while the Vanderbilts lived here at the turn of the last century.  On the other end of the room was a large fireplace--that looked like three "normal" sized ones put together (with a fire going during the nighttime tour).﻿ 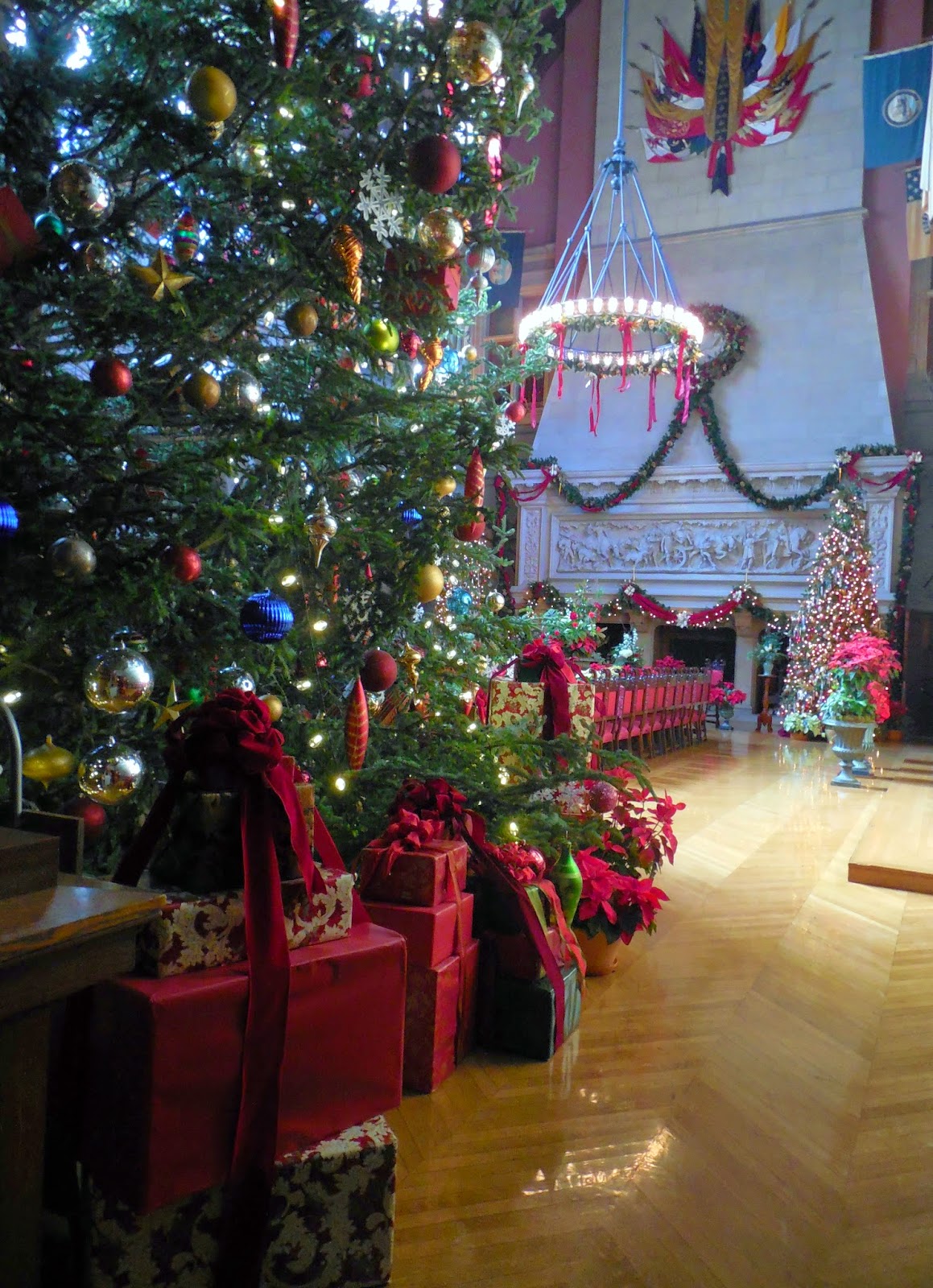 From the hall, we moved to the more "intimate" dining hall: 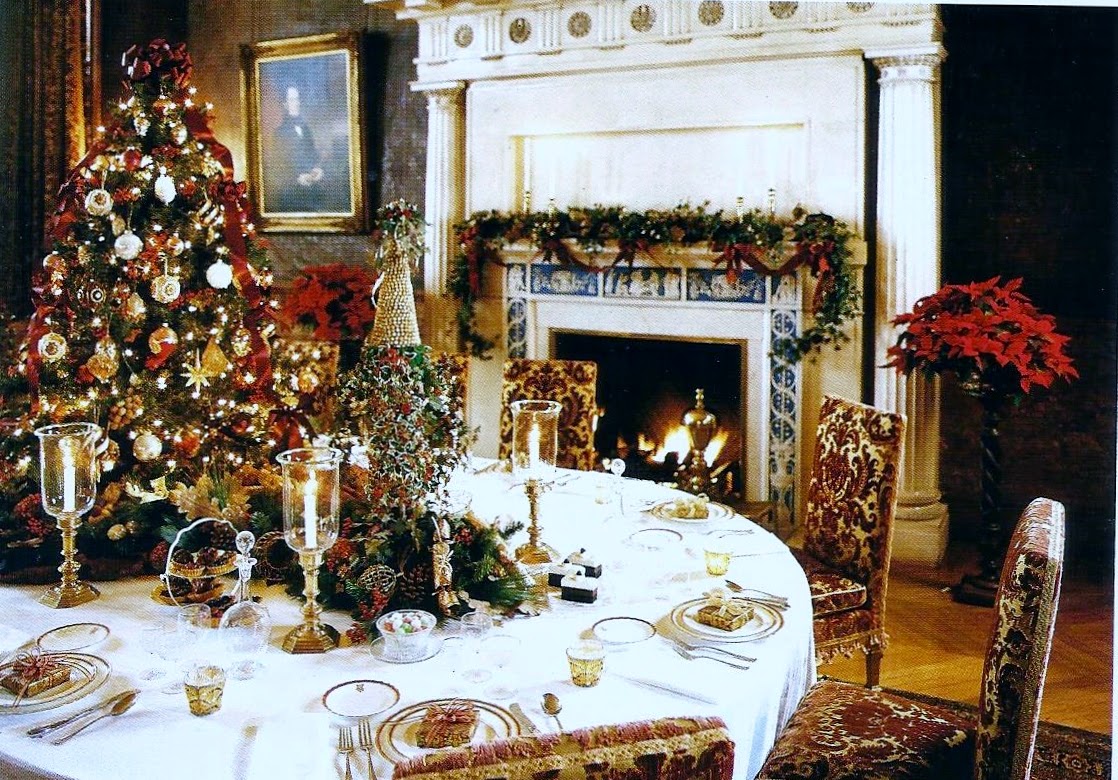 ﻿
(postcard)
This is not exactly how the room looked during my tour (the tree is different), but this picture gives a good view of the pretty Wedgewood mantle surround.
From the dining room, we walked through a salon and a music room, which were both added after George Vanderbilt died and were not finished when the house was first opened.  Off of the music room was a beautiful balcony with views of the surrounding mountains.  Unfortunately, it was very cold, and the balcony was not opened, or I would love to have stepped outside! 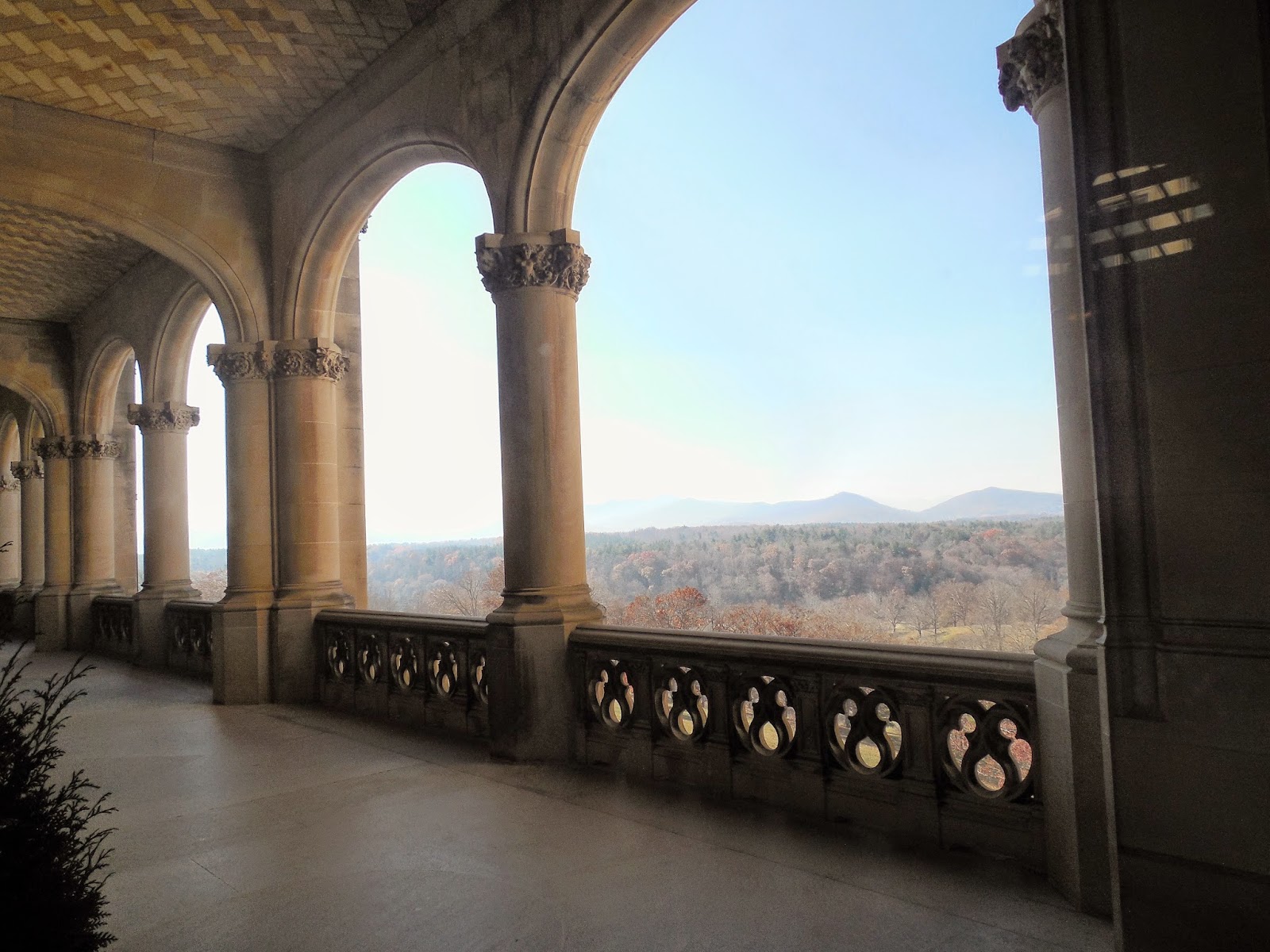 Next on the tour is one of my favorite rooms, the tapestry room. 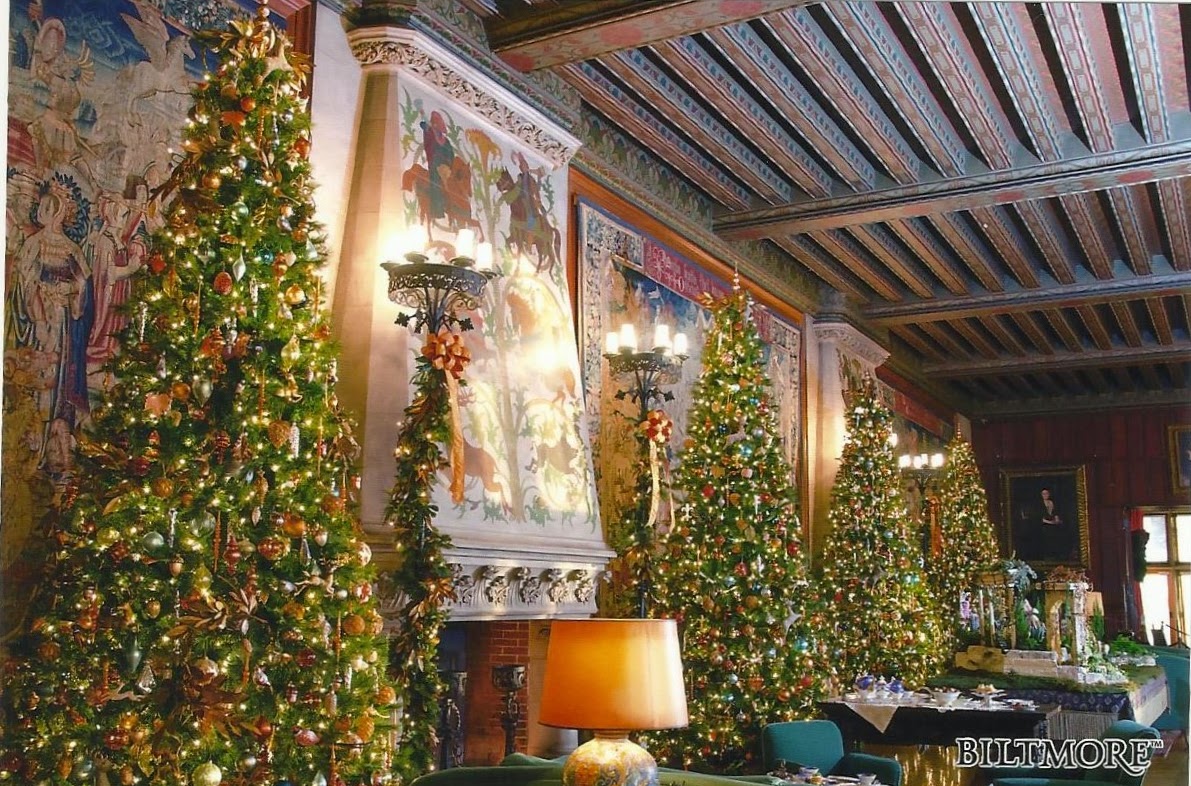 It is in this gorgeous and extremely long room that ladies may have gathered for afternoon tea under three very old tapestries.  This set, called the Triumph of the Seven Virtues, is believed to have been woven between 1525 and 1535. 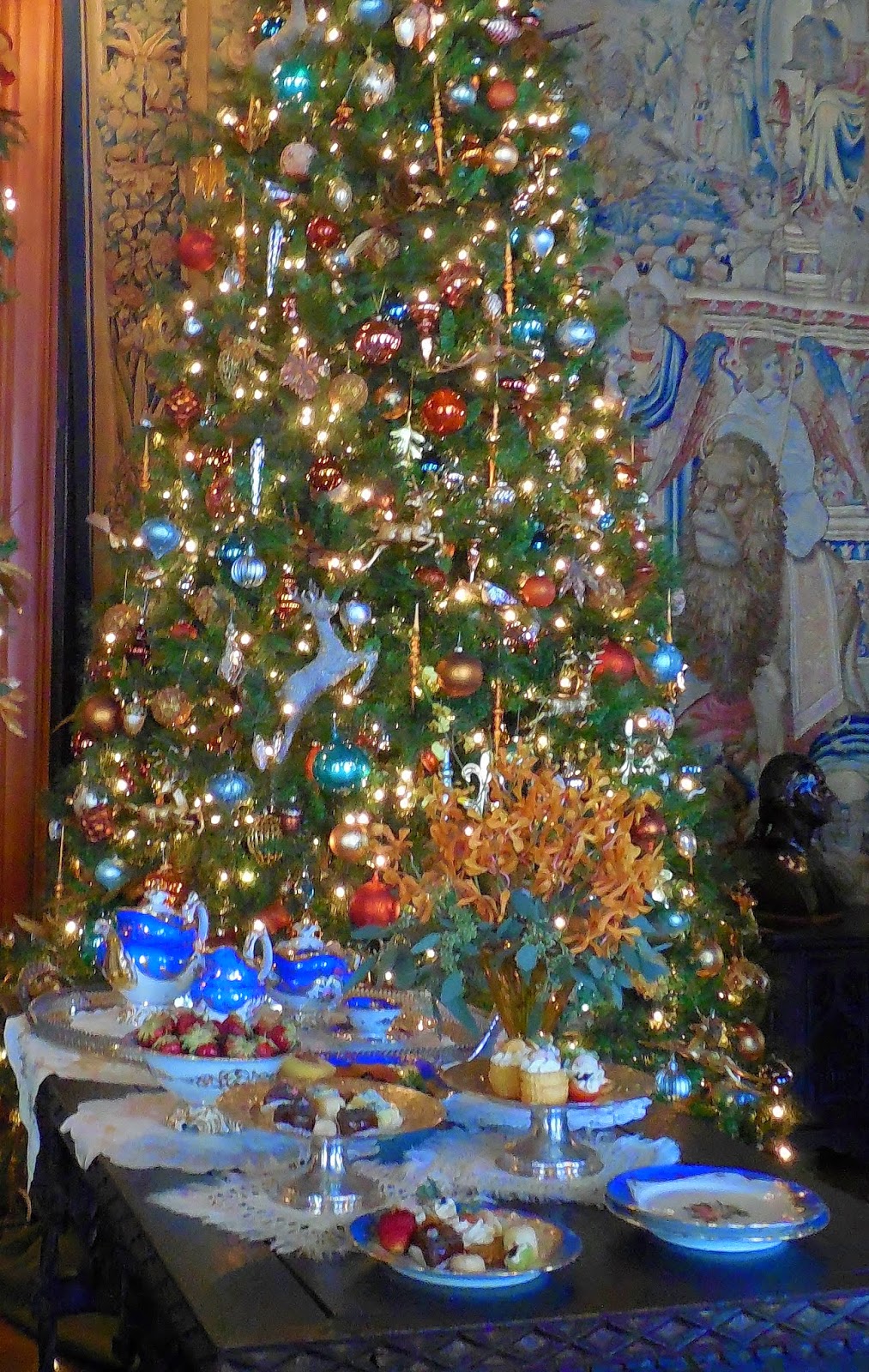 I'd love to have tea in this room with this beautiful French antique set from the 1800s, especially with all the wonderful trees and those tapestries!

On the other end of the tapestry room is the library, which was also gorgeous, with dark wood built in shelves all the way to the ceiling and a large fireplace with a black marble surround. 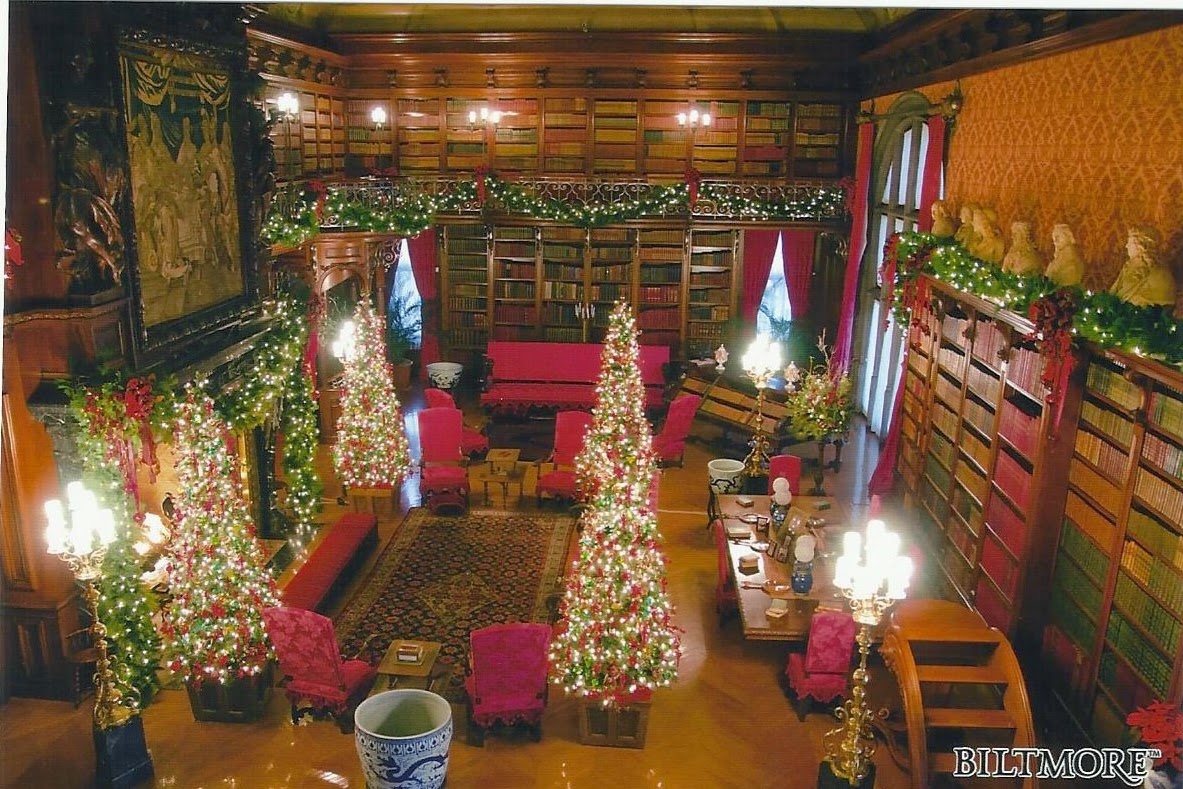 This picture also gives you a feel for what the candlelight tour was like.  This ends our tour of the first level of the home.  There were also three other fours open--the second and third flours up and the basement.  The basement was not as pretty as the fancy decorations in the upper levels, but there was a tiled swimming pool and a bowling alley, which were especially impressive considering the age of the house!  ﻿
﻿

I wanted to share a couple of pictures of the outside of the house before signing off tonight:

First the front of the house: 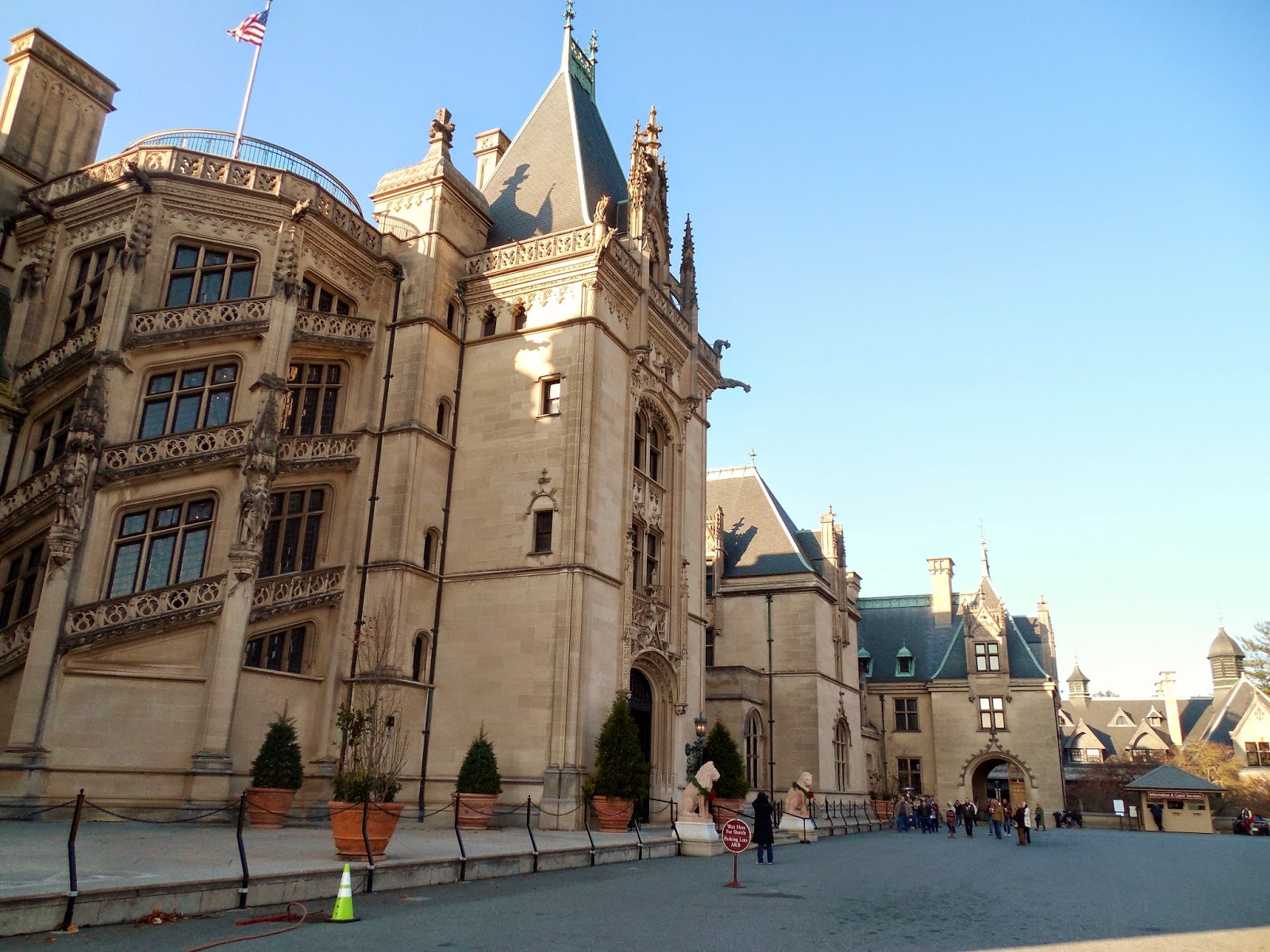 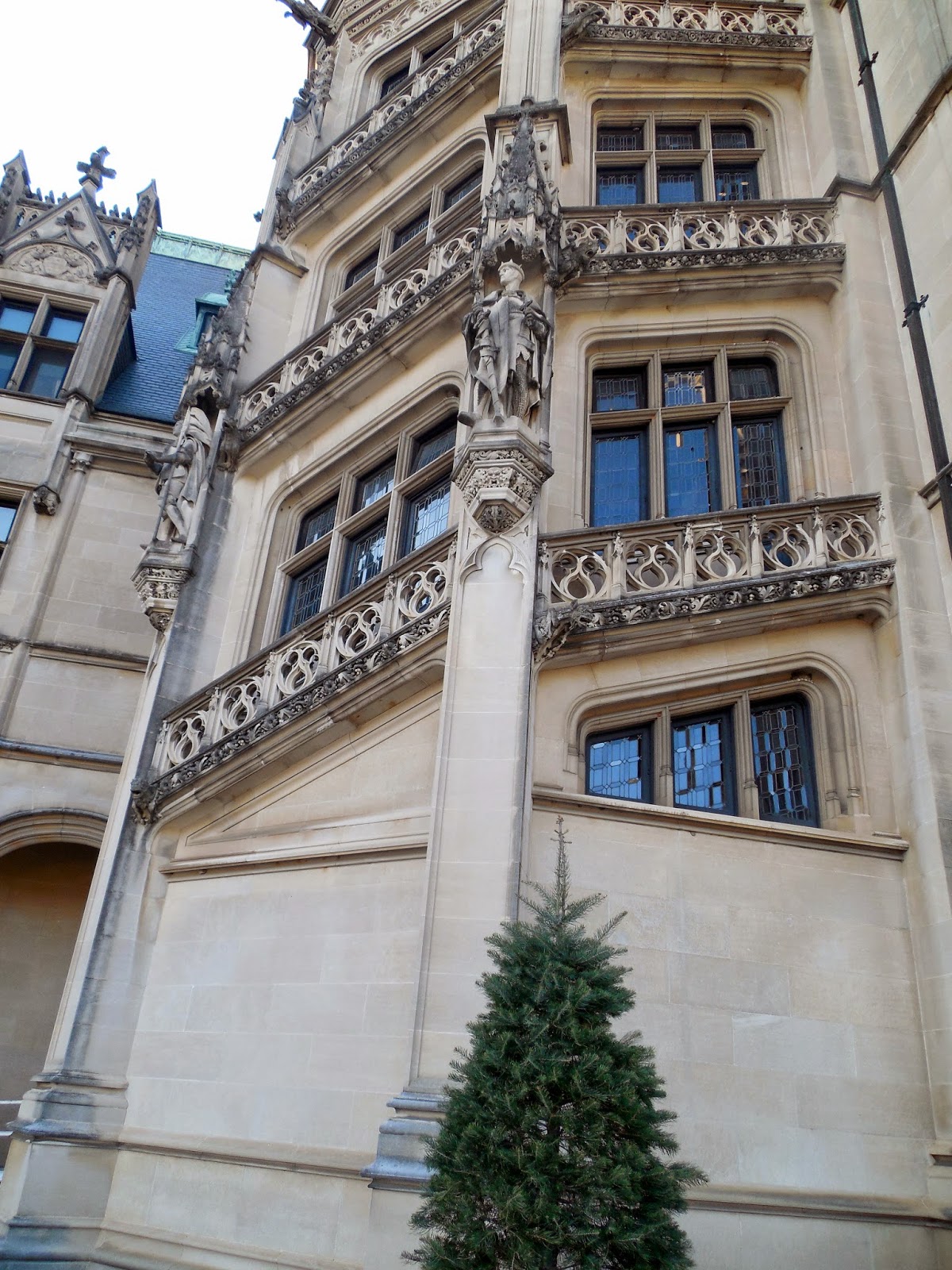 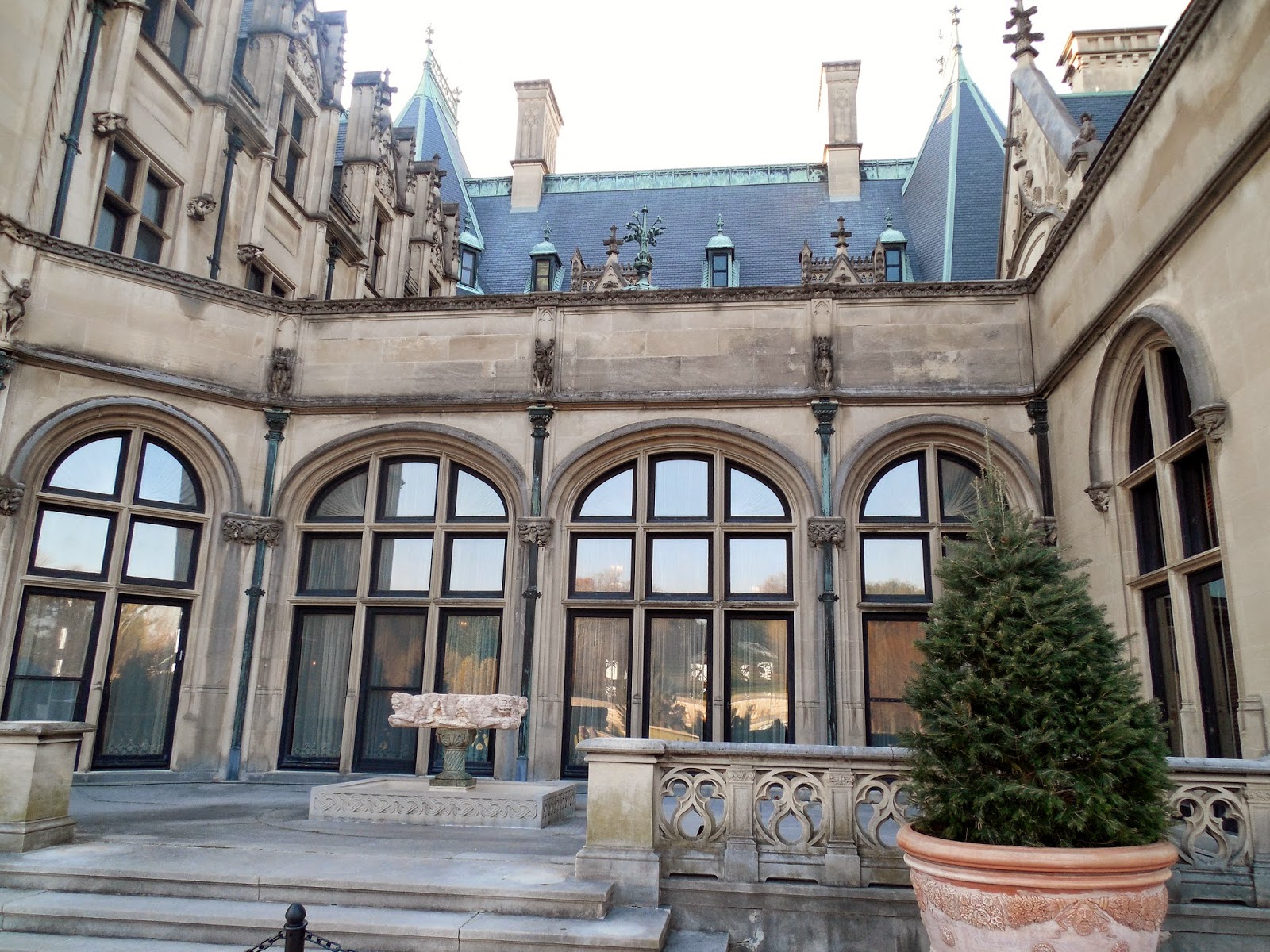 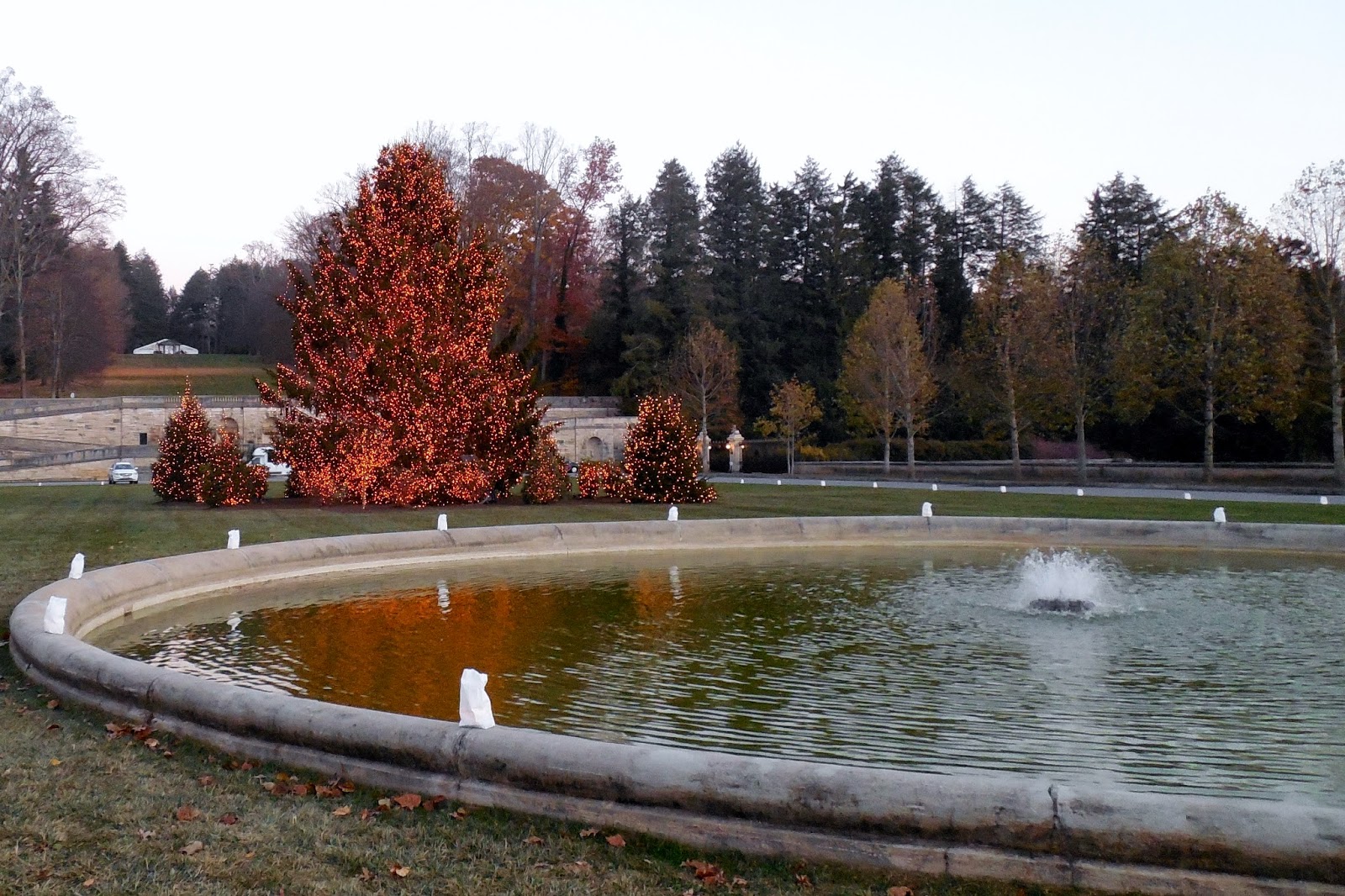 and then the side and back: 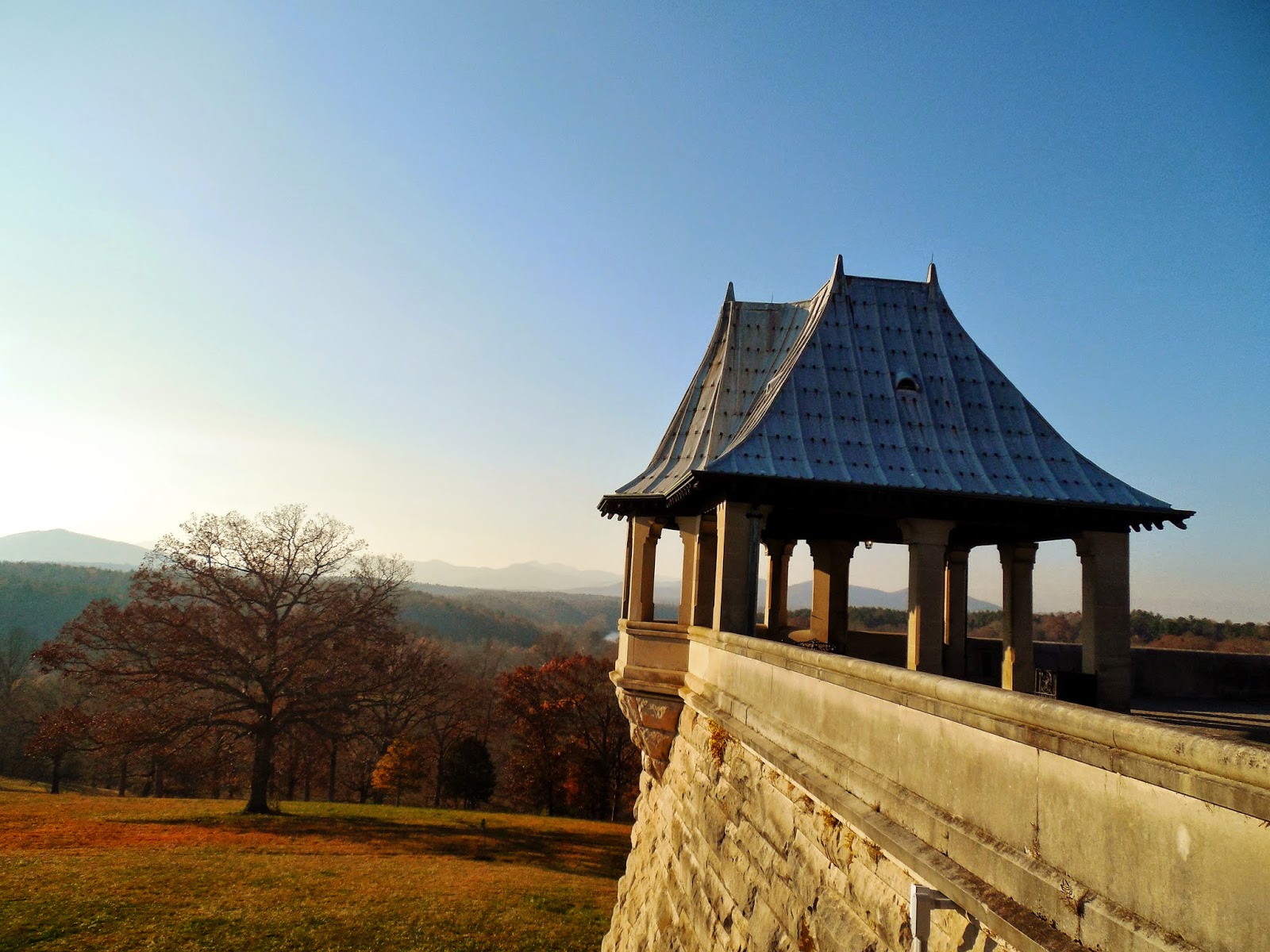 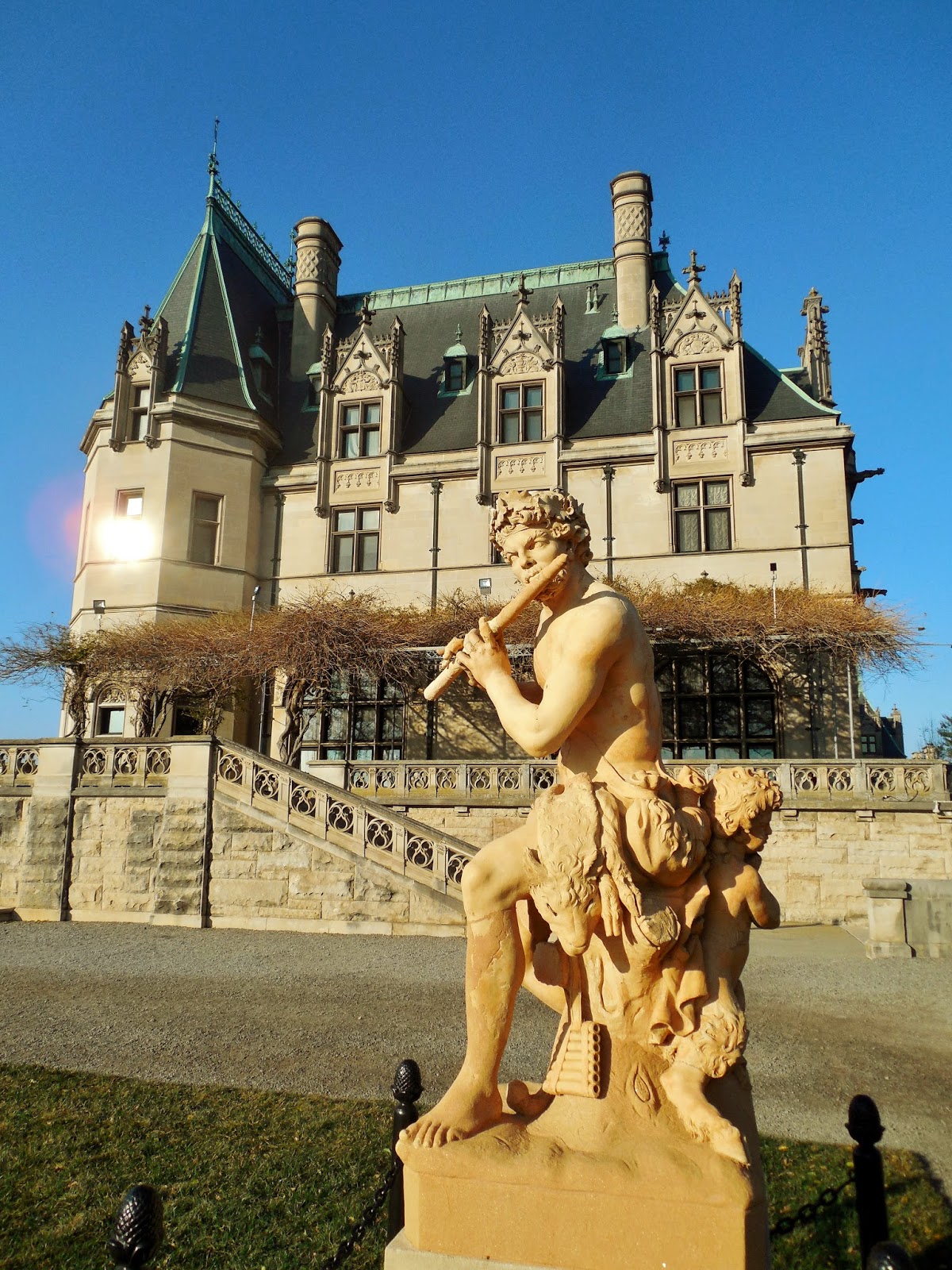 I'll leave you for now with a picture of the Biltmore at night: 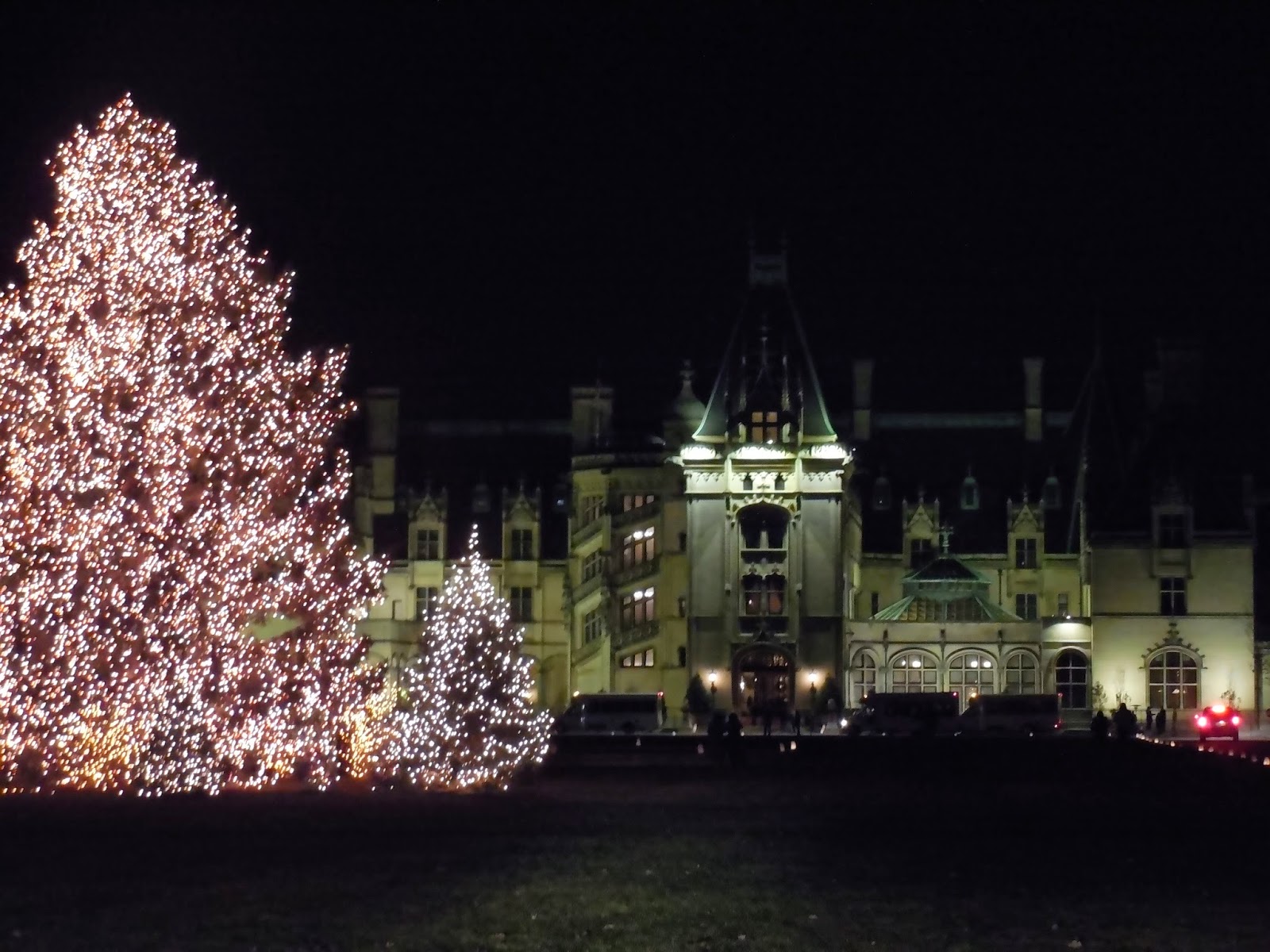 I have lots more to share, so please check back later this week!
﻿
﻿
Posted by Carrie at 10:31 PM