Today I thought I would share more about the savories from my Afternoon Tea in Paris party.  Here is a picture of the tiered stand again: 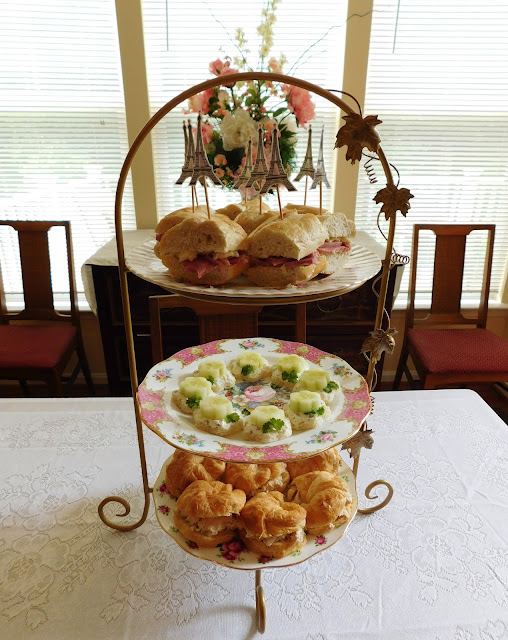 Starting at the top, I served ham and cheese baguette sandwiches. 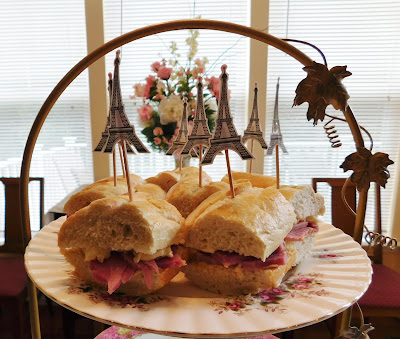 I bought slices of a good ham (Honeybaked Ham since there is a store near my house) and a French cheese.  I choose camembert because I was actually served it in France and really enjoyed it--it is a pretty mild cheese.  I used a mayonnaise based spread, but in hindsight I think a Dijon (or dijonaise) would be good on this sandwich (and appropriate for the French theme!).
I made the Eiffel tower picks by putting two stickers together around a fruit pick.
The sandwiches on the middle plate are my cucumber canapés. 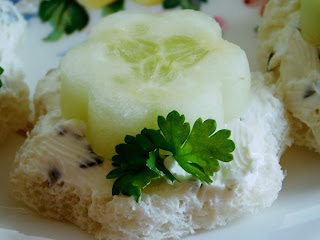 These sandwiches were really simple.  I used flower shaped fondant cutters in two different sizes on both the thin sandwich bread and the cucumbers.  I bought spreadable cream cheese with onions and chives and spread it on the bread (after sticking the bread in the freezer for a bit to make it easier to handle both for the cutters and the spread).  As the final touch, I cut a bit of curled parsley from my container herb garden to use as the "leaves" of the flower.  This is my second time using a flower cutter on a cucumber, and I must say it worked much better on a hothouse English cucumber if you have that as an option in your grocery store.

For the last sandwich, I served chicken salad on mini croissants. 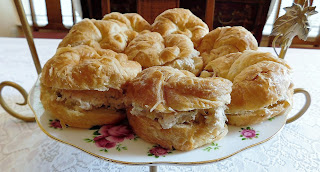 I started with a basic chicken salad.  I purchase rotisserie chicken and cut off the white meat into smaller strips to use in the chicken salad (reserving the thighs and legs for dinner during the work week).  My version of chicken salad is simply mayonnaise with a little bit of dill relish.  For this French tea party I wanted to add a bit of flare, so I decided to sprinkle in some herbs de Provence.  Herbs de Provence is a mix of different herbs reminiscent of southern France, including savory, rosemary, marjoram, and thyme.  I really enjoy herbs de Provence on roasted chicken, but I don't know if I would put it in chicken salad again or not.  The sandwich wasn't bad, but I think I would have preferred if it was just plain chicken salad.

The final savory I served are the mini quiches I forgot to take a picture of.  I did find one picture of the tea party where you can see them off to the right side of the photo: 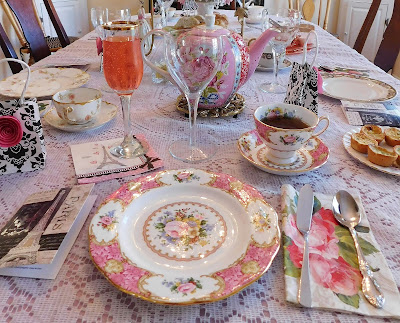 I cheated and didn't make the quiche from scratch--I figured I wouldn't get them as small as the ones you can buy frozen for appetizers and it would be easier to just heat up the frozen mini-quiches rather than making them myself.  It did work out really well--I just popped them into the oven about a half an hour before the tea party was set to start and 15 minutes later I had perfect warm mini-quiches!
Posted by Carrie at 9:22 PM