Things have been pretty busy so far this week, so this week's tea party will just be a small evening snack to share my new Homegoods find (I really need to stay out of that store...but then I wouldn't find the cool stuff that ends up on this blog!). 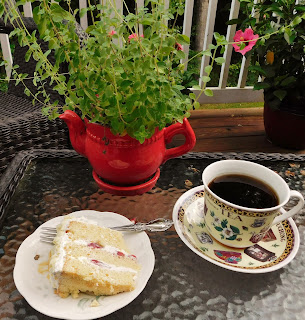 My sister's birthday is this week, and, since she works at a bakery, her boss gave her a tres leches cake with a fruit and cream filing--delicious with a cup of earl grey in my new teacup and the main star of this post. 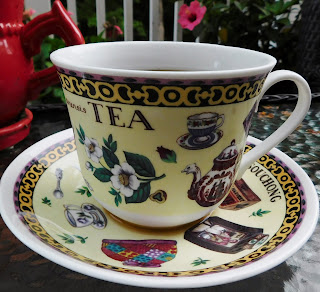 This cup has so many neat things on it!

The tea plan itself, camellia sinensis, and a tea strainer, 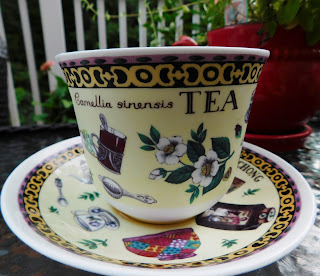 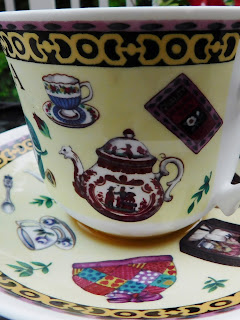 A box of Liptons, a tea scoop, and a tea glass with a silver holder﻿ 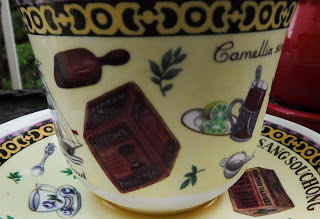 and one of the most interesting additions, the Flying Cloud, a "tea" clipper. 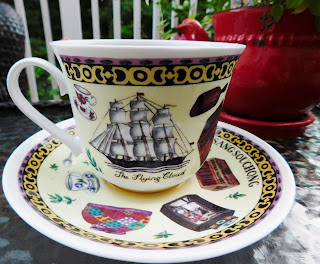 I actually looked up this ship to find out more about why it would be on this teacup full of tea paraphernalia.  Clippers were the fastest sailing ships of their kind, and were built to feed the wishes of 19th century tea lovers to get their tea all the quicker from China.  The China Clippers, also known as tea clippers, traveled the trade routes between Europe and the East Indies. 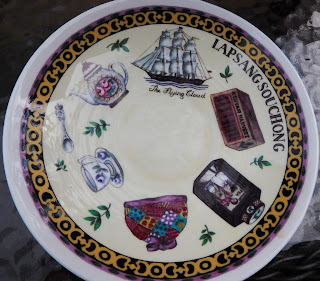 (There is even a tea cozy on the saucer, along with tea canisters)

The Flying Cloud built in Boston, Massachusetts, launched in 1851.  She is known for making the trip between Boston and San Francisco in 89 days--the fastest passage between those two cities for over 100 hundred years, until her record was broken in 1989.  Interestingly, it was a woman by the name of Eleanor Creesy who navigated  who record breaking voyage.  The Flying Cloud was later sold to a British company, and sailed between England and Australia and New Zealand, before, in her later years, becoming a part of the log trade between Newcastle upon Tyne, England and Saint John, New Brunswick, Canada.

Steam rises from a cup of tea

and we are wrapped in history,

comfort of ages in our hands.