So I'm getting this in just under the wire (5 minutes to spar!), but, as promised, my first recipe post for last weekend's Christmas Brunch.

First, my mother's Christmas Day quiche, which is an easy and yet delicious quiche recipe. 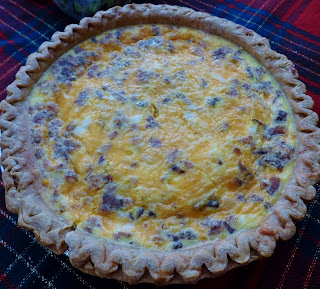 Christmas Day Quiche
10 eggs (roughly)
1 cup real bacon bits
1 pound shredded cheddar cheese (my default is sharp, but my mother uses mild)
1 pint half and half
two frozen deep dish pie shells
1.  Preheat oven to 350.  Cover a large cookie sheet (one big enough to hold both shells side by side) with tin foil.  Place shells on top.
2.  In a large bowl, whisk eggs.  Add half and half and whisk to combine.  Add bacon and cheese and whisk to combine.
3.  Pour quiche mixture evenly into pans until slightly under the top.  The cheese and bacon will mostly still be in the bowl with some liquid.  Using a large spoon, evenly divide between two pies until they are filled.  Some mixture may have to be discarded.
4.  Bake for 40-50 minutes (sometimes even an hour, start checking at the 40 minute mark).
Next we have the French toast casserole with praline topping..yum yum! 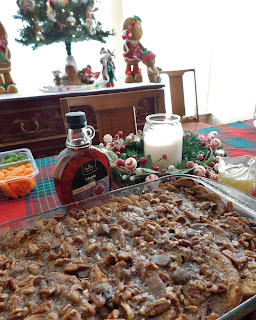 The idea for this dish was a pinterest find, but I will say that after I saw the recipe, my first though was...this is a bread pudding.  Because it is.  But French toast casserole (or bake, it was sometimes called that as well) does sound more breakfast-y.  This dish is made the night before and sits in the fridge overnight until you are ready to bake, which makes it a good dish to serve at a party, since all you do the day off is make the topping, spread it on top, and stick it in the oven!
For my party I decided on a Paula Deen recipe (here), with a couple of additions.  Instead of French bread, I bought a loaf of raisin bread, and a loaf of Apple fritter bread from Target that's sell by date was before the date of the party (so it would be slightly old).  I alternated the two breads on either side of the dish--using roughly half a loaf each--really, I just filled the pan as much as I could.  I also added some golden raisins--not too many, just enough that they were sprinkled throughout.  I made the dish so that I knew it would soak for about 11 hours before being baked.  In the morning I checked on it and drained some of the liquid still remaining in the bottom and poured it over the top so it could soak in (at this point there was still about 2 hours until I would put it in the oven).
Now a quick word of advice.  DEFINITELY put some tin foil on a baking sheet and place it underneath the 9 x 13 pan to catch the run off of the brown sugar and butter topping.  I did not, even though I did wonder for a minute if it would bubble over, but I thought to myself, nah,  it won't happen!  Then my oven started smoking.  There was a cloud of smoke in my house about 10 minutes after all but one guest had arrived. I guess it was a bit of excitement, since my friends were wonderful and running all over trying to help get the smoke out!  Luckily, the oven made it until right about the 40 minute mark and the casserole and the quiche were both done (and my fire alarm didn't go off).  After the smoke cleared I set everything out, and we were ready to go.  At that point the last guest arrived, and the first thing she said was my house smelled wonderful!  I guess caramelized range can be a good smell :).
I made a honey whiskey sauce to go with the French toast casserole (since it is really a bread pudding anyway :-P).  I also served it with maple syrup as Paula suggests in her recipe, but I though a tiny bit of the whiskey sauce on top instead was perfect!
Honey Whiskey Sauce
1/2 cup butter
1/2 cup heavy cream
1/4 cup whiskey (I used a tiny bottle of Jim Bean's Honey Whiskey liqueur)
1/2 cup sugar
1.  Warm over low heat, stirring constantly, until sauce is gently boiling.
2.  I poured the sauce into a creamer so it could just be poured over the bread pudding. 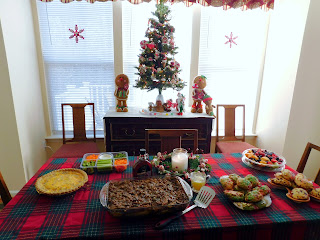 ﻿
﻿
As I mentioned on the first Christmas Brunch post, I also had sausage balls that I didn't have a chance to cook and serve since I had to turn the oven off.  Sausage balls are delicious so I was double-ly sad (what with the smoke too).  After I called my mother after the party had ended to invite my parents and sister over for leftovers, the first thing she said is, "you could have cooked them in your toaster oven!"  This is why mom's know all.  Even if the smoke incident hadn't happened, the quiche and the casserole fit on different racks in the oven together, but the sausage balls did not, so regardless it would have been good to cook them in the toaster oven.  I did end up cooking the sausage balls for the after party, and 12 cooked perfectly after 25 minutes on the toaster oven's mini tray.
Sorry for the lack of new (or many) pictures, I was a bit overwhelmed after the smoke incident!
﻿
Posted by Carrie at 11:55 PM