Day two of recipes, and we've gotten to the scones.  A friend requested scones, so I decided to try something new, a fruitcake-like scone...sort-of. 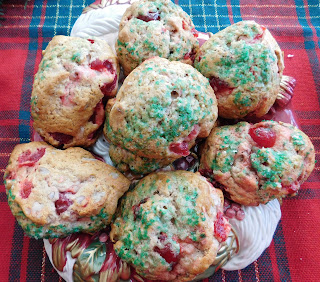 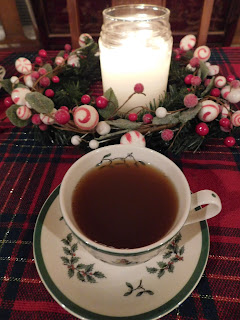 I started with the recipe on this website.﻿  I didn't realize when I started (really because I have no concept of liquid measurements), but the recipe on the linked page is huge.  I ended up having to change it up by default.  It is also really sweet so I increased the tea flavor to compensate.  Because of the changes, I'll go ahead and share it here.  It was very good and smelled wonderful as it simmered in the kitchen.

Directions:
Bring cider to a boil, add cinnamon sticks, cloves, and sugar.  Boil for 5 minutes. Meanwhile, also brew the tea bags in the 2 cups of boiling water for 5 minutes.  Strain the spices out of the apple cider mixture.  Combine all ingredients.  Place in refrigerator overnight (I just poured it into an empty 1/2 gallon jug.


Steps for the Day of the Party
﻿
On the day of the party, pour into a pot and add two cups water.  Once the mixture has come to a boil, take off heat and pour into a crock pot to keep warm (I used the warm setting of my pot).   Add two cinnamon sticks and a tablespoon of whole cloves. 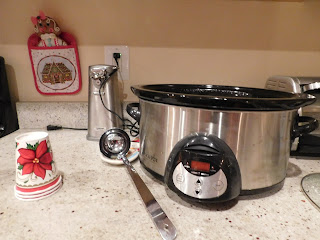 I would recommend that you taste the mixture at this point.  If you would like a stronger tea flavor (like me), bring four cups of water to a boil.  Add 4 black tea bags to two cups of the boiling water.    Add tea and the remaining two cups of water.  Regardless, you should add as much tea or plain water (or both) as you think you need too to dilute the taste and cut down on the sweetness.
﻿ 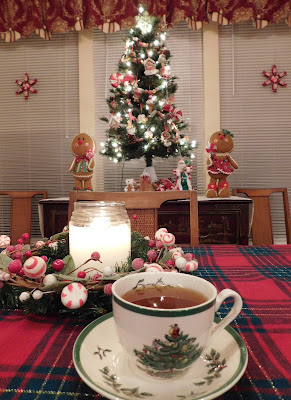 I should have done a better job of writing down what I did, but it was a bit of trial and error.  This recipe was a great way to use some of the black tea in my stash that is too strong for my plebian tastes.
Posted by Carrie at 10:56 PM