On to the cutest of the dishes I served (or at least I thought so) was spaghetti and meatball cupcakes! 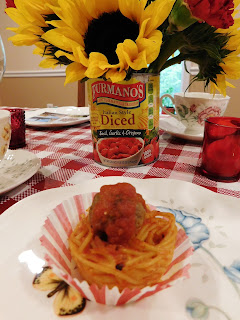 I found the recipe for these at a blog called By Stephanie Lynn, via pinterest.  I boiled the noodles (1/2 a box) the night before and added 2 tablespoons olive oil, then put it in a bowl in the refrigerator.  The morning of the party, I got out the noodles, mixed in marinara sauce and shredded parmesan cheese (a lot of cheese) to where the noodles looked well covered, then added 2 eggs (beaten).  After mixing everything together, I got out a normal sized cupcake tin and sprayed each well with butter flavored no-stick spray.  I used a fork to swirl noodles on and then place in each well, filling it pretty much to the top.  I then used the back of a spoon to put in an indentation for the meatball.  I then set them aside until right before the guests were due so that they would be warm.

They bake for 20 minutes at 350, so time budgeting was an issue.  I also microwaved the frozen meatballs I had bought based on the package directions and then added marinara sauce and microwaved a bit more, until the sauce was warm.  After the noodles were done, I picked them out of the well, and placed them in doubled cupcake liners (to adsorb some of the sauce and hopefully not show through).  Then topped each noodle cup with the meatball and a little bit of sauce (cheese too if you like, but I didn't think it was necessary--and I forgot.  I also put a LOT of cheese in with the noodles, so I probably had cheese covered). 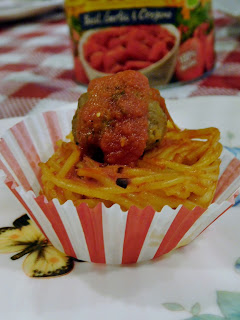 They had gone cold by the time I was ready to serve them (which I had been afraid of) but luckily they microwaved up fine.  I just stuck the serving place with them in the liners and everything in the microwave for a couple minutes, and they were good to go!  You could make them the night before and just microwave right before you plan on serving them, but I thought they didn't taste quite as good the next day, which is why I baked them the morning of the party (because normally I'm all about doing as much stuff ahead of time as possible). 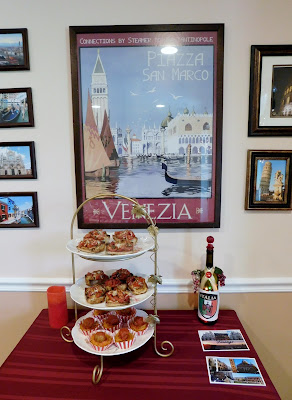 I really lucked out with the white and red liners--I found them in the cheap bins near the front at Michaels.  They even had mustaches on the bottom!
Check back in tomorrow for pane del pescatore!﻿
﻿
Posted by Carrie at 9:52 PM