Let's begin the breakdown of the menu!  First up, the Antipasti.
Caprese Salad:
I bought cherry tomatoes, cut fresh basil leaves from my container herb garden, and bought some marinated (in olive oil with herbs) small mozzarella balls from my grocery store.  Early in the morning on the day of the tea, I put the number of tomatoes and mozzarella balls needed in a bowl, poured some of the olive oil from the mozzarella container on top, added a dash of balsamic vinegar, and let it sit for a bit.  Then I just layered one tomato, one basil leaf, and one mozzarella ball on red, white, and green fruit picks.  Very easy, and I think they turned out very pretty (and they were also yummy). 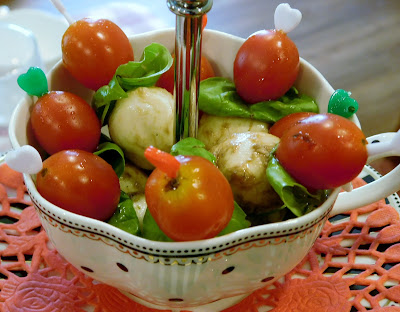 On the day of the party, the very first thing I did was set out the cream cheese so it could be softening while I made other things on the menu.  After it was soft, I took about 4 ounces of plain cream cheese, added about a tablespoon of plain 2% greek yogurt, and then sprinkled in some dry Italian dressing seasoning pack to taste (probably only about a 1/2 tablespoon or so).  I piped the spread with a large open star tip onto toasted rounds of bread (sourdough cut out with a 2 1/2 inch cookie cutter then toasted in my toaster oven).  I topped it with a slice of cucumber then put a slice of pimento stuffed green olive on top (with a small amount of the spread to make the olive stick).  I'm not a big olive fan, but the olive gave it just a slight kick over a typical cucumber sandwich. 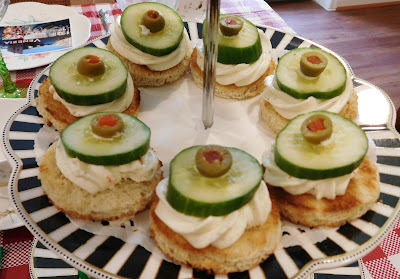 Tuna tremezzini (Venetian tea sandwiches)
I was really happy with this tuna salad version, which I arrived at after a couple trial versions earlier in the week.  I started with two cans of tuna fish in olive oil that I drained and put in a mixing bowl.  I added 6 ounces of softened plain cream cheese and 8 ounces of softened chive and onion flavored cream cheese.  I added a tablespoon of freshly squeezed lemon juice, and two tablespoons of fresh chopped up dill.  I mixed all the ingredients with my electric hand mixer.  I then spread a generous portion on a slice of Italian bread, topped with another slice of Italian bread, cut off the crusts, then cut the bread in thirds.  Done!  I did sprinkle some dried dill on the sides for looks because I happened to have some in my spice/herb cabinet.  I've always been a little nervous about serving tuna salad because I was afraid there would be some people who didn't like it, but my guests really liked this version (as did I, it is really really good!).  I will definitely reuse this recipe. ﻿ 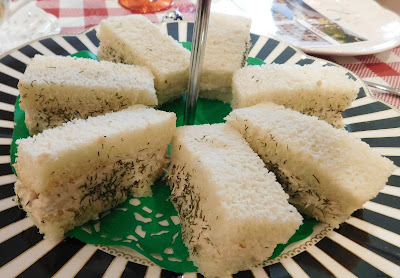 
At that last minute I decided to go ahead and serve bruschetta too, even though I already had two tomato based things on the menu (the caprese salad and the spaghetti and meatball cupcakes I'll share tomorrow).  I was glad I served them, because they were a big hit, and really weren't hard to make at all.
The second thing I did (after setting out the cream cheeses) the day of the party was mix the bruschetta topping so it could be sitting on my counter and the flavors mixing together.   I started with this Allrecipe recipe, but made some changes, so I'll share it here.
In a bowl, combine the following:
8 roma tomatoes (plum tomatoes) cut in half and remove seeds in the middle, pat dry with a paper towel, then chop
3 cloves minced garlic
1/4 cup olive oil
2 tablespoons of an aged balsamic vinegar
1/4 cup fresh basil, stems removed and basil chopped
A dash of sea salt (I just used my grinder a couple of turns)
1/4 tsp black pepper
Right before the party was to begin, I put my oven on broiler setting, and placed slices of a French baguette on a cookie sheet (I bought two French baguettes).  Broil for 1-2 minutes until brown.
Top bread with tomato mixture (making sure to spoon on some of the olive oil too).  Top with shredded mozzarella.
Broil for 5 minutes or until cheese is melted. 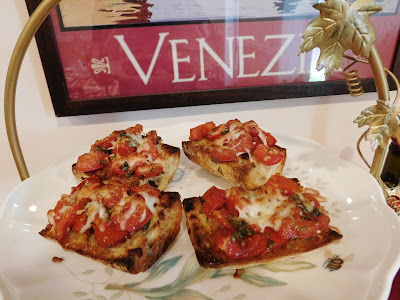 The bruschetta had gotten cold by the time it was ready to be served, but it still tasted good (and I've had cold bruschetta, including in Italy, so I guess that is okay!).﻿
﻿
﻿