In addition to throwing a small tea party for my sister, I also helped with a friend's (Pooja's) baby shower in February.  Her mother threw a wonderful party for her at the house of one of her friends.  There were about forty people that came--which is definitely the biggest party I have been involved in!  Another friend (Amanda) and I were in charge of the "games" (really more activities as you will see), helped with the decorations, and I also brought some of the food.

First, the decorations.  Because there were so many people, we were spread out in the entire first floor. 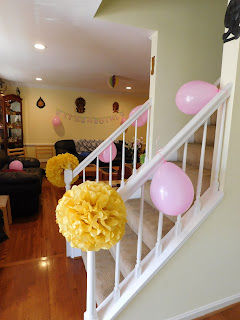 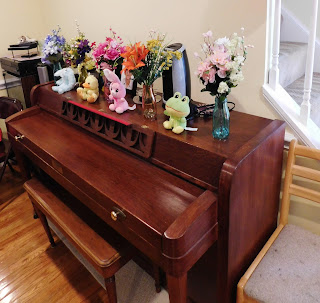 (Decorations on the piano in the living room) 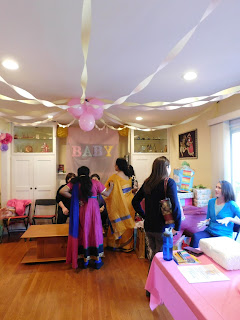 (The "main" party room with the activity table, f/k/a the family room) 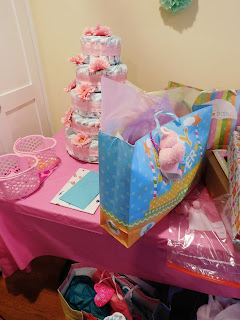 (The diaper cake another of Pooja's friends made on the present table.  It was really pretty, but, unfortunately, I didn't get a good straight on picture) 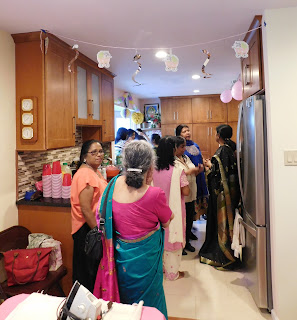 (Decorations in the kitchen)

The party also spilled over into the last room on the main level, the dining room, where all the "savory" goods had been set out buffet style. 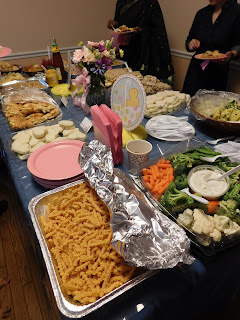 I brought the tea sandwiches (unsurprisingly). 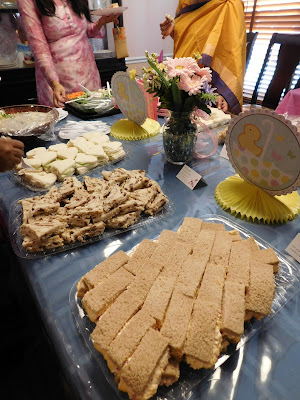 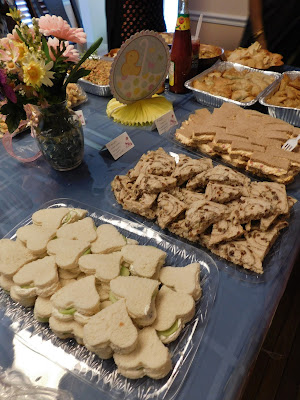 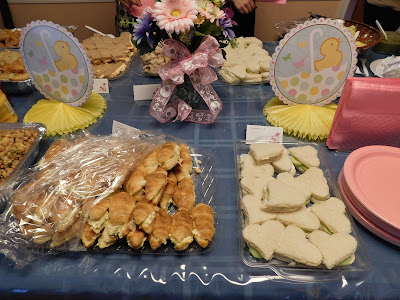 This was my first time making this many tea sandwiches, and it was definitely a learning experience.  The homeowner was a vegetarian (as were many of the guests), so all the food was also vegetarian (egg salad was okay, I asked ;)).  I figured spreads would be the easiest thing for me to make for this many people--46 had RSVPed, so I made 50 of each sandwich to make sure there was one for each person with a few extras in case more people showed up).  I made a big batch the night before of the pimento and the pineapple cream cheese and boiled the eggs.  I got out the cream cheese spreads first thing in the morning so they could come to room temperature while I made the egg salad (I think it tastes best fresh) and put the bread in the freezer (to make it a little hard so it is easier to spread the, well, spreads!).  My sister came over and was a HUGE help since she made all of the pimento cheese fingers and pineapple triangle sandwiches.  My mom also came over with our breakfast (hey, it was hard work) and she made all the egg salad croissant sandwiches. 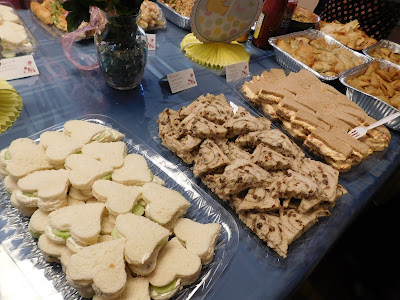 I had wanted one cut out sandwich, and decided on the hearts really because I could stretch the bread the farthest (one slice = two hearts).  One really cool tip I learned from preparing for this party is that you can cut out the shapes ahead of time and store them in gallon sized ziplock bags.  They stay fresh and are already ready for the party!  I had bags of twenty hearts that I put in the freezer in the morning, and took one bag out at a time while I made the sandwiches.  I will admit, it would have been way too much work to do these if I did have all the help that morning, but they did turn out really pretty!

I didn't get a good picture of it, but after each platter was done (and my sister also did a great job arranging them so they sandwiches fit and they looked pretty--she did catering deliveries in her past jobs) I covered them with slightly damp paper towels before my sister then wrapped them in plastic wrap.  As I said, Katie was a HUGE help.

Next up we had the desserts set up on the kitchen island. 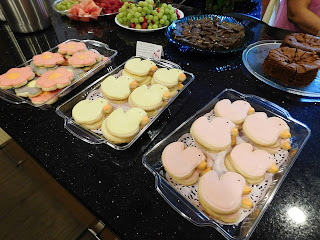 The weekend before I made these shortbread cookies.  This was my first time doing the "poured" icing, and I think it worked out pretty well, especially the ducks. 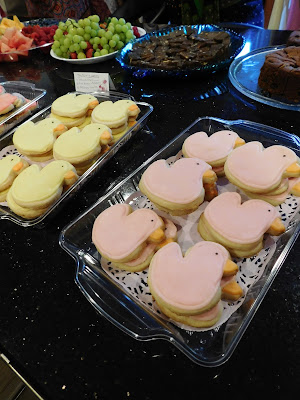 while the yellow ducks were lemon, and the flowers were vanilla. 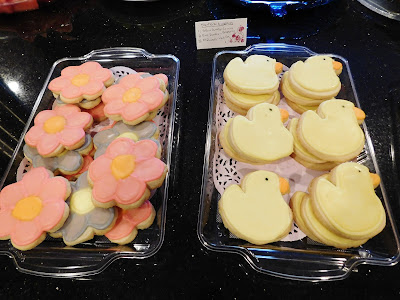 I kindof wish I had just made all different colored/flavored ducks in hindsight as the ducks were both easier, and cuter, I think.

There was one last station in the kitchen--the drinks.  I brought a pink punch (just the store bought pink party punch and ginger ale), and put duckies on top! 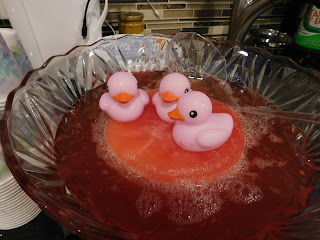 Next up, the activities.  Here is the table, with the "diaper messages" (guests just write a message on a diaper to cheer up the new parents in the middle of nighttime changes--so funny and really useful) and the onesie/bib decorating station.  Amanda had the good idea of a decorating onesie station, and I think it turned out really well, especially with a party this large. 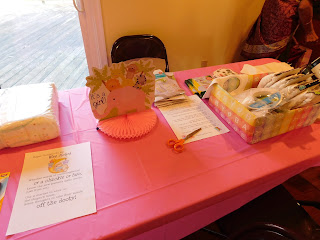 We had fabric markers for those artistically inclined, and iron-ons for everyone else.  I found clip art on the internet that I then printed out on special iron-on paper and Amanda bought a book of different iron-ons.  Guests also could sign their masterpieces with the pens. 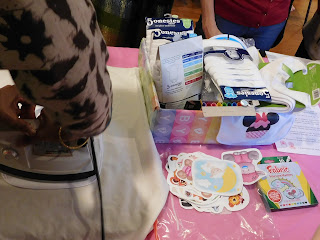 Here were some of the bibs. 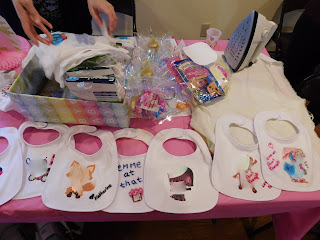 And here are the onesies: 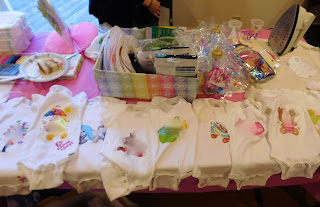 (I searched for free clipart on pinterest, but I have blurred the pictures incase any of the clipart was not properly identified.  They turned out beautifully, I swear!).

Last, we have the prizes for the games (we also played present bingo and had a duck drawing) that I put together. 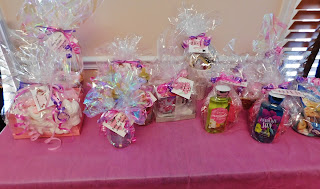 Each prize had a theme. 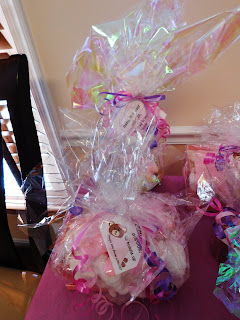 (Baby it's cold outside, so bundle up is on the tag, and the prize included a scarf, gloves, and a hat) 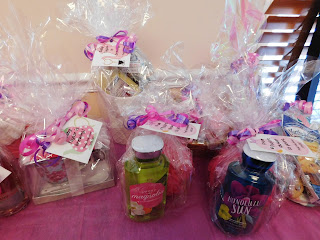 In the picture above, the prize to the left says "Baby is brewing" and it s pretty chintz mug with a teapot teabag holder and tea, the one in the back is also "baby is brewing" but included a tall mug with coffee and chocolate covered espresso beans.  The two prizes in the front are shower gel with loofahs and the tag says "from Pooja's shower to yours" an the one on the far right includes muffin mix, a pot holder, and a spatula, and the tag says "Pooja has a bun in the oven, so can you!

One other prize was my favorite, but the picture didn't come out that well: 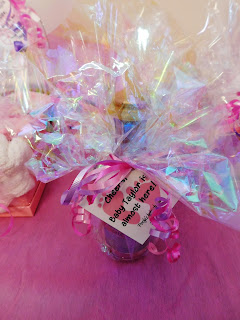 It is a mini bottle of Barefoot sparkling pink moscato, that I put a nipple on top of like a baby bottle!  The tag says "Cheers, Baby is almost here!"

After presents, Pooja's mom brought out the cake. 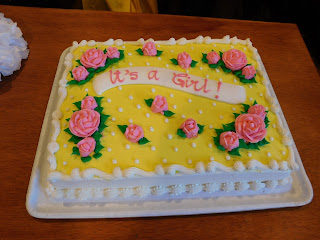