Walking through "The City"

Day 3 in London we went to "The City."  The City is a roughly one square mile business center located in East London that, about 2,000 years ago, was Roman Londinium.  We began our trek through this part of London with St. Paul's Cathedral, designed by Sir Christopher Wren.﻿
﻿ 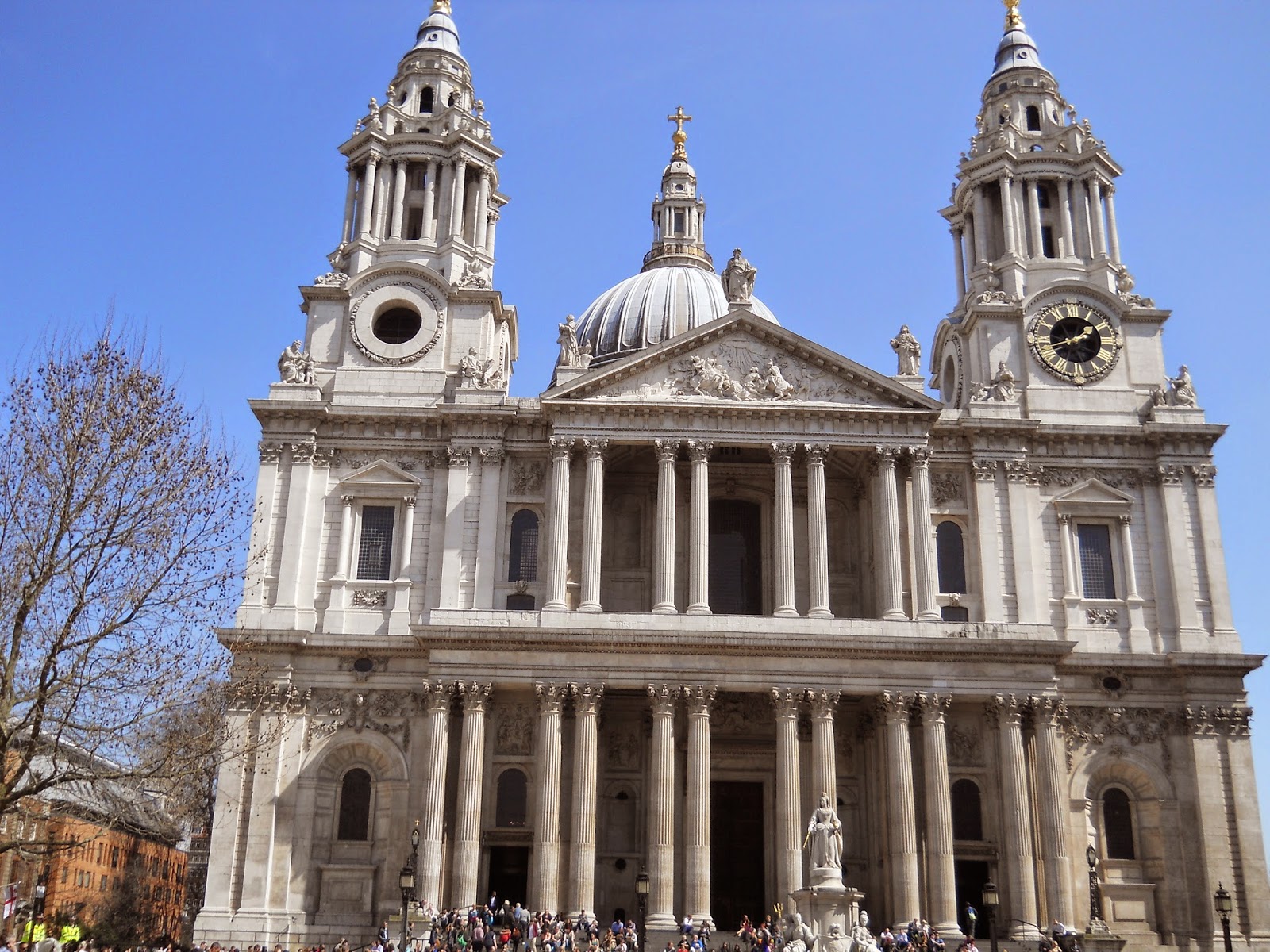 Unfortunately, this is another church that we could not take pictures in, but it truly was stunning.  One thing I can share, however, is the beautiful view from the top of the church, which my friend, Katherine, and I reached after walking up literally HUNDREDS of stairs. 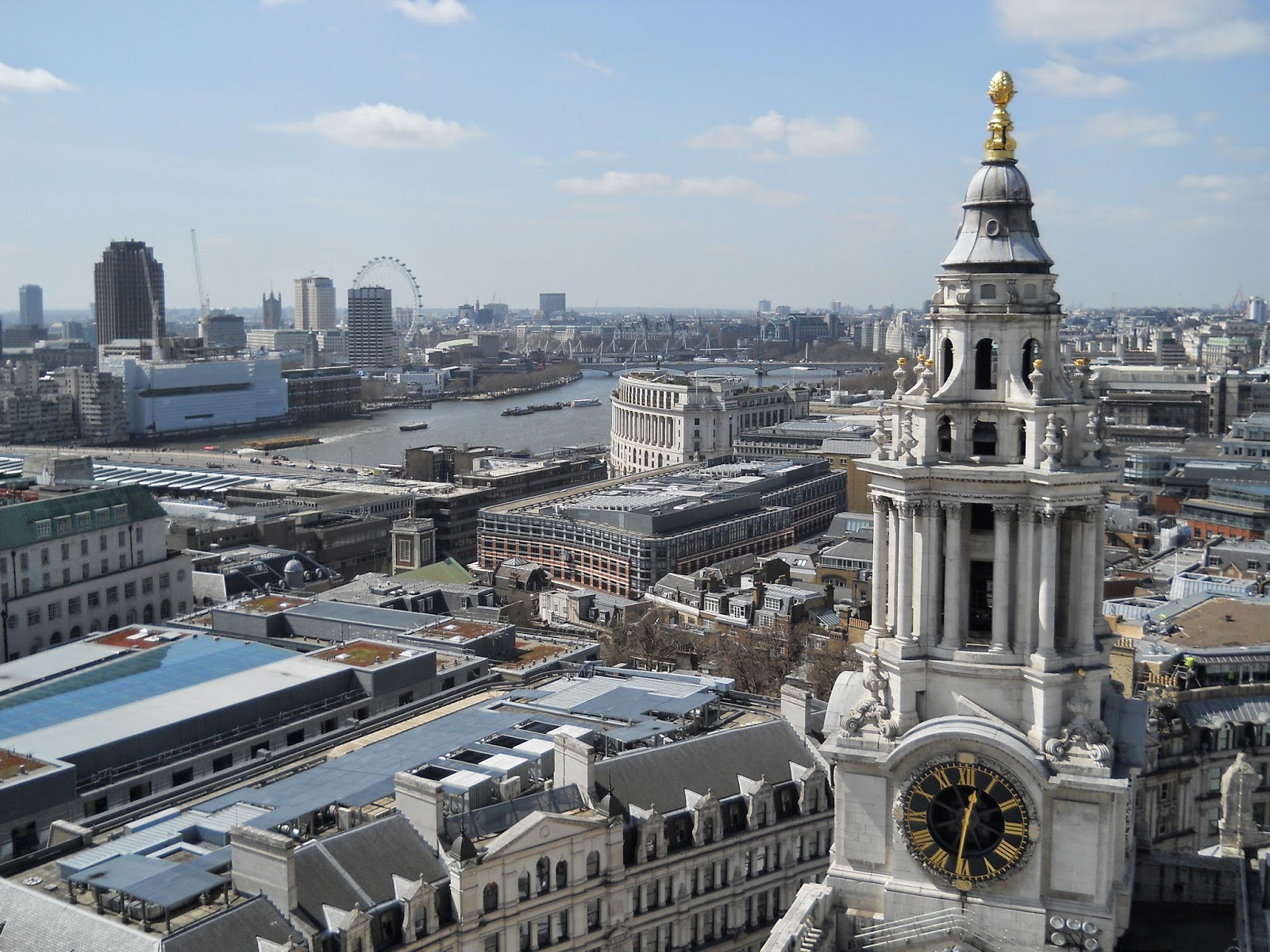 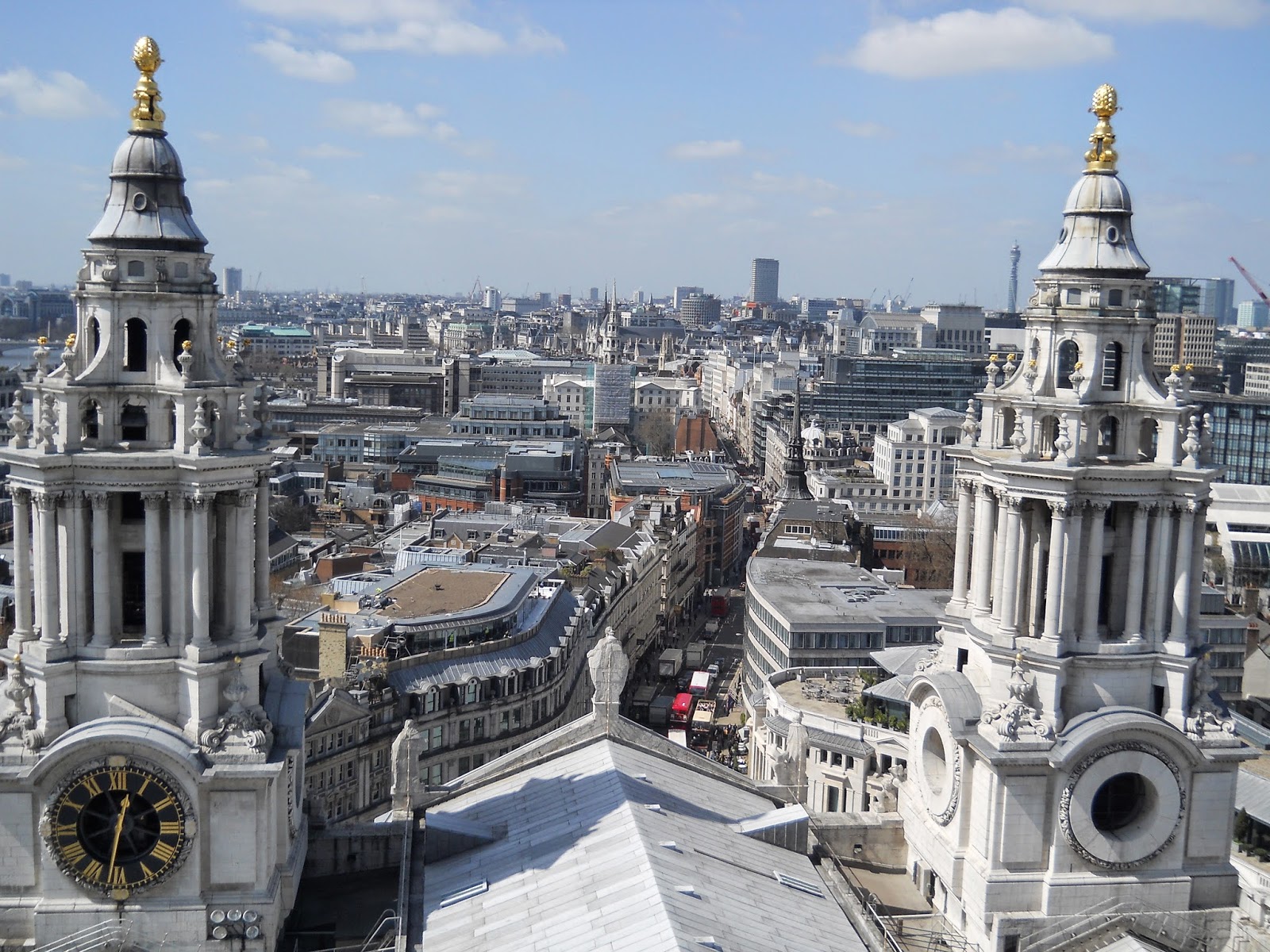 (view between the two clock towers of the church)

The City truly was amazing.  One of my favorite pictures from this day is the one below, which shows how you walk down a road with storefronts and apartments, turn a corner, and see a huge cathedral.  Modern combines with architecture that is hundreds of years old. 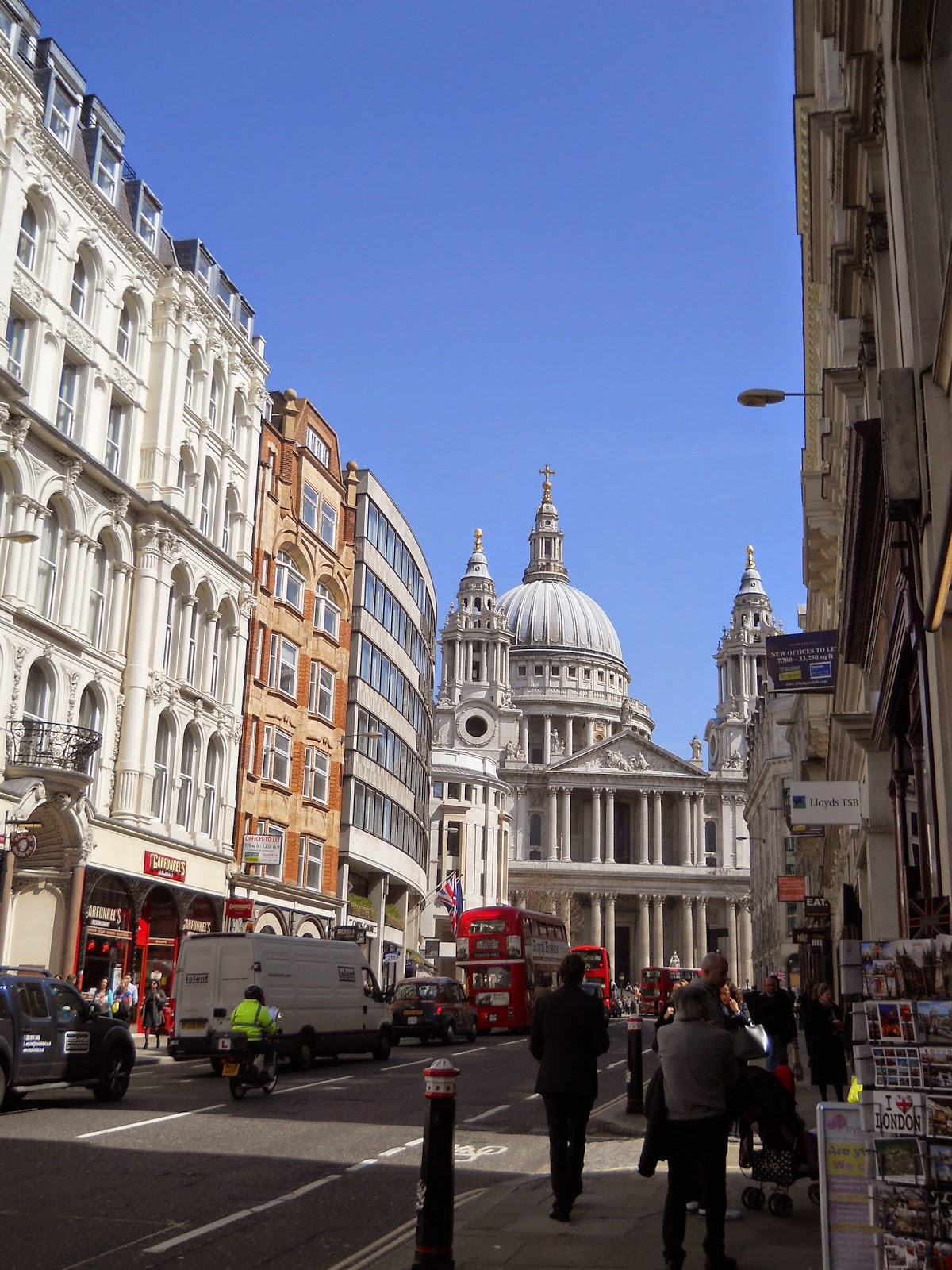 ﻿
﻿
From St. Paul's we walked up Cannon Street, with a quick stop at the Monument, a 202 foot tribute to the Great Fire of London, also designed by Christopher Wren.  Construction on the monument began in 1671. 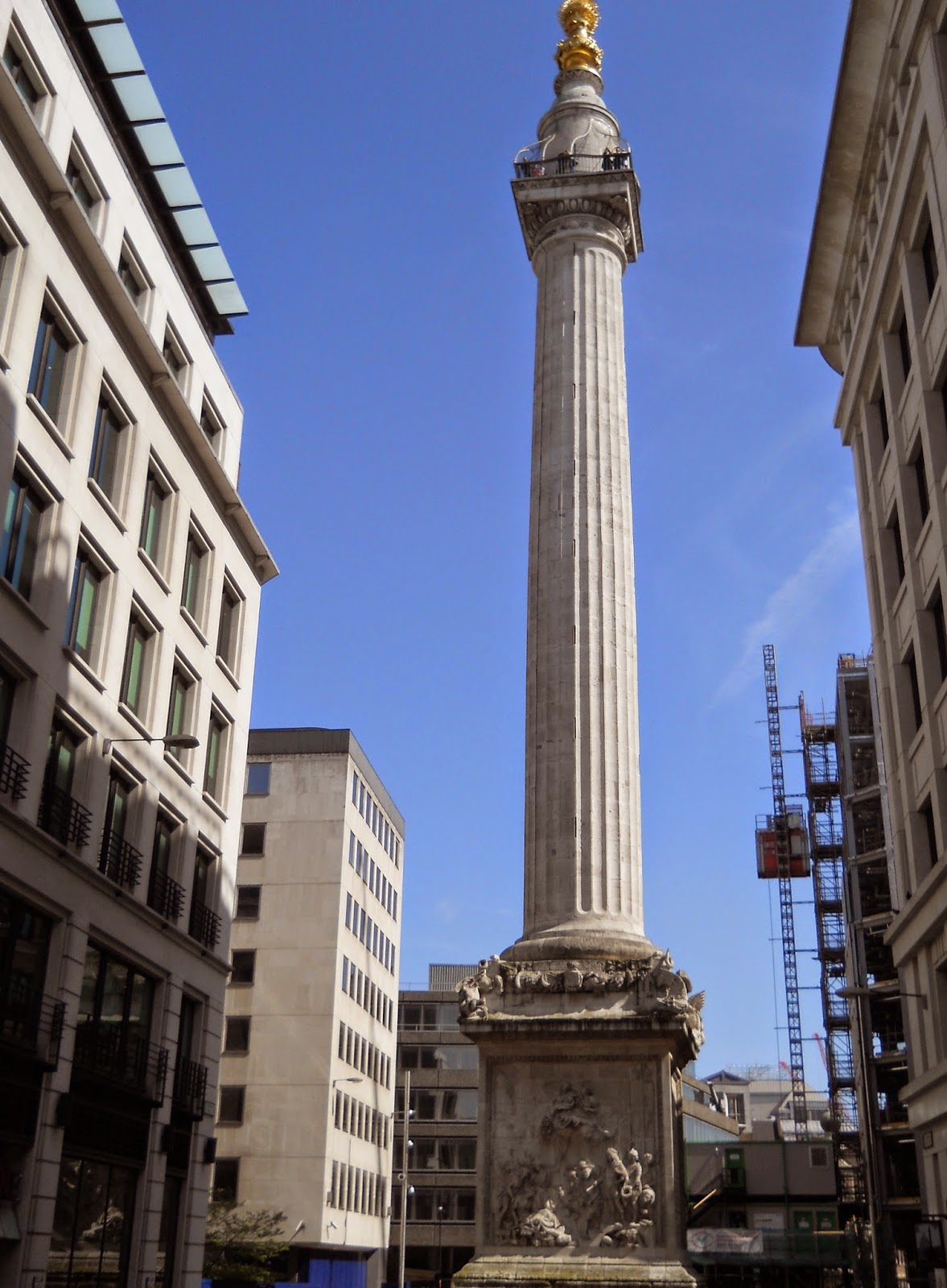 Our next stop is one of the most well known landmarks in London, the Tower. 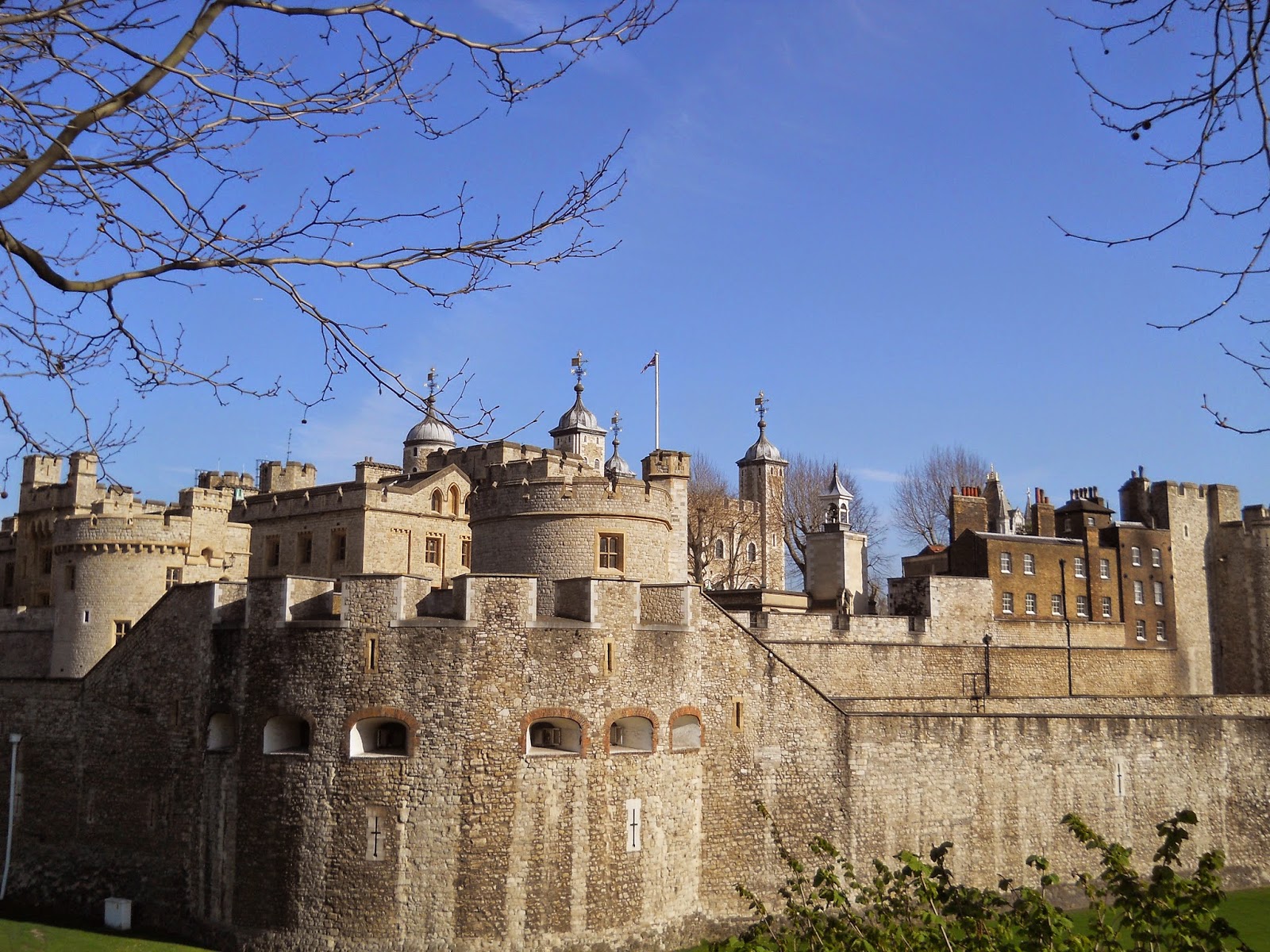 The Tower of London began its life in 1066 as a wooden fortress built by William the Conqueror to keep hostile Londoners out.  The Tower has served as a defensible castle, a home of royalty, and a prison and execution site.  The Tower is a place with long history including the mystery of the Princes in the Tower who disappeared in 1483.  The Tower also served as a prison for future royalty--Elizabeth I was imprisoned here by her sister, Queen Mary.  The Tower was also  the execution grounds for Elizabeth's mother, Anne Boleyn. 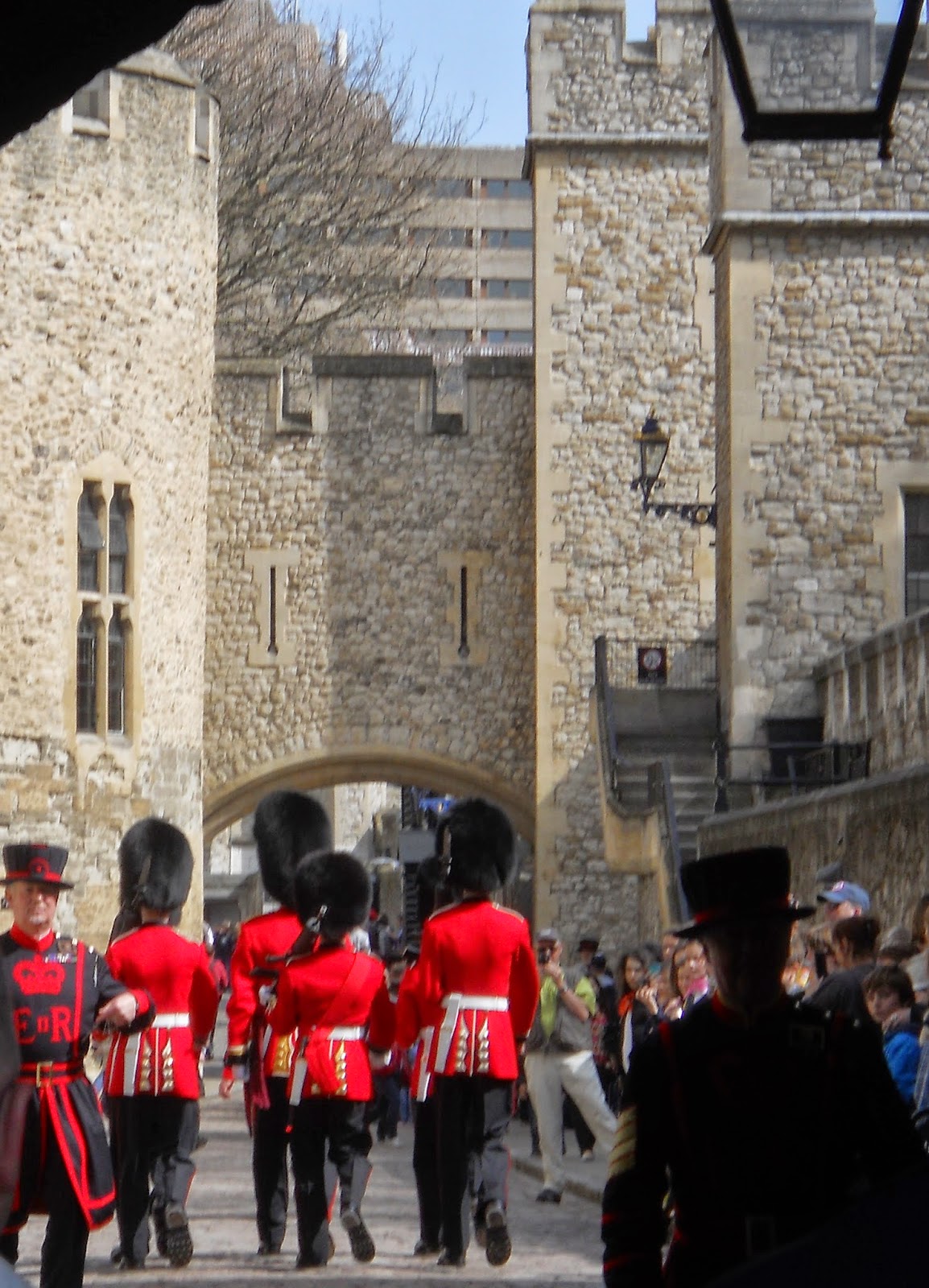 As we walked to the gate, we were greeted by a changing of the guard and by Yeoman Warders (also known as Beefeaters).  We went on one of the tours lead by a Beefeater guide, which was very informative and entertaining.  One interesting fact he shared is that the Tower was once home to a menagerie of exotic animals. 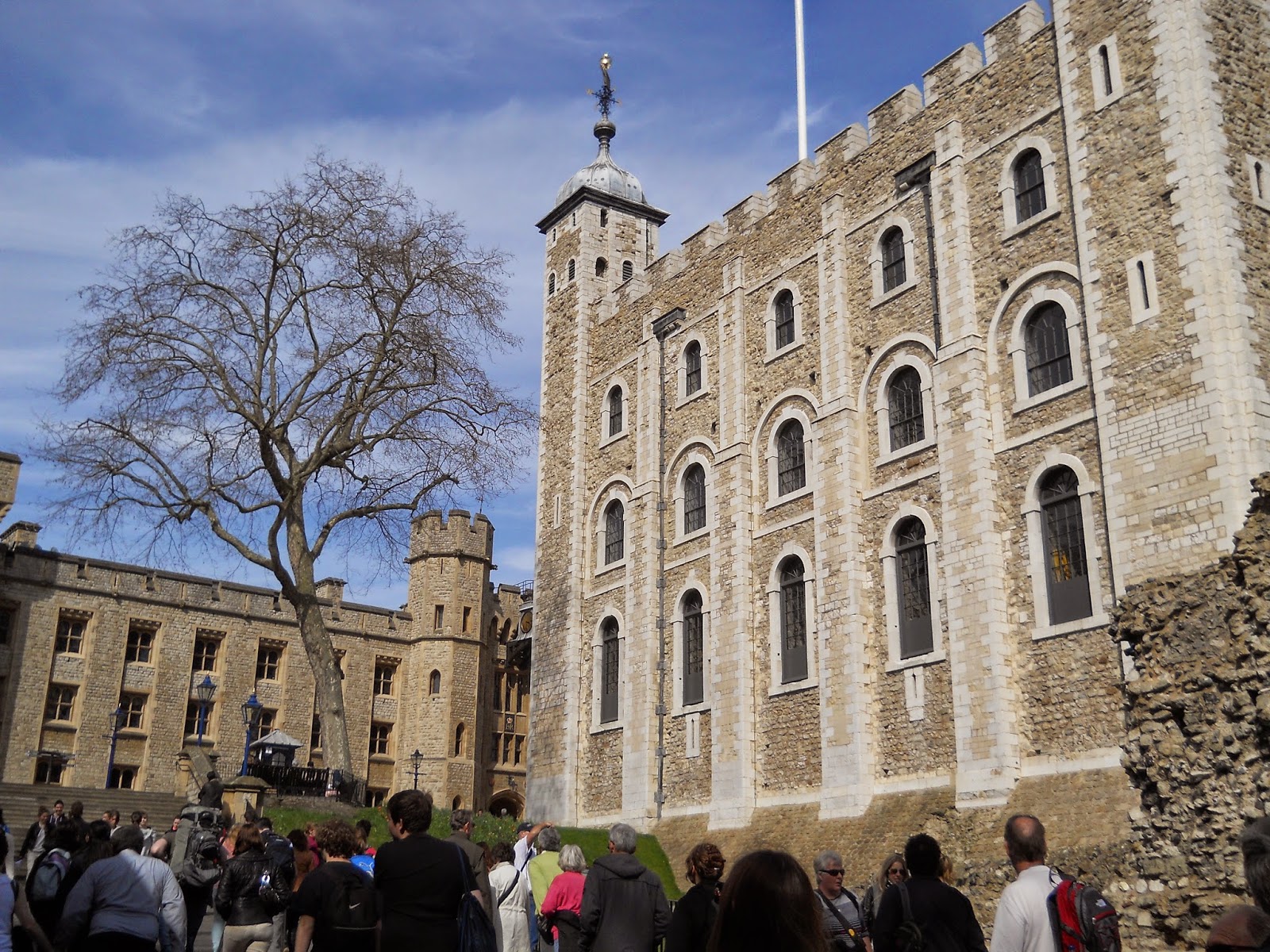 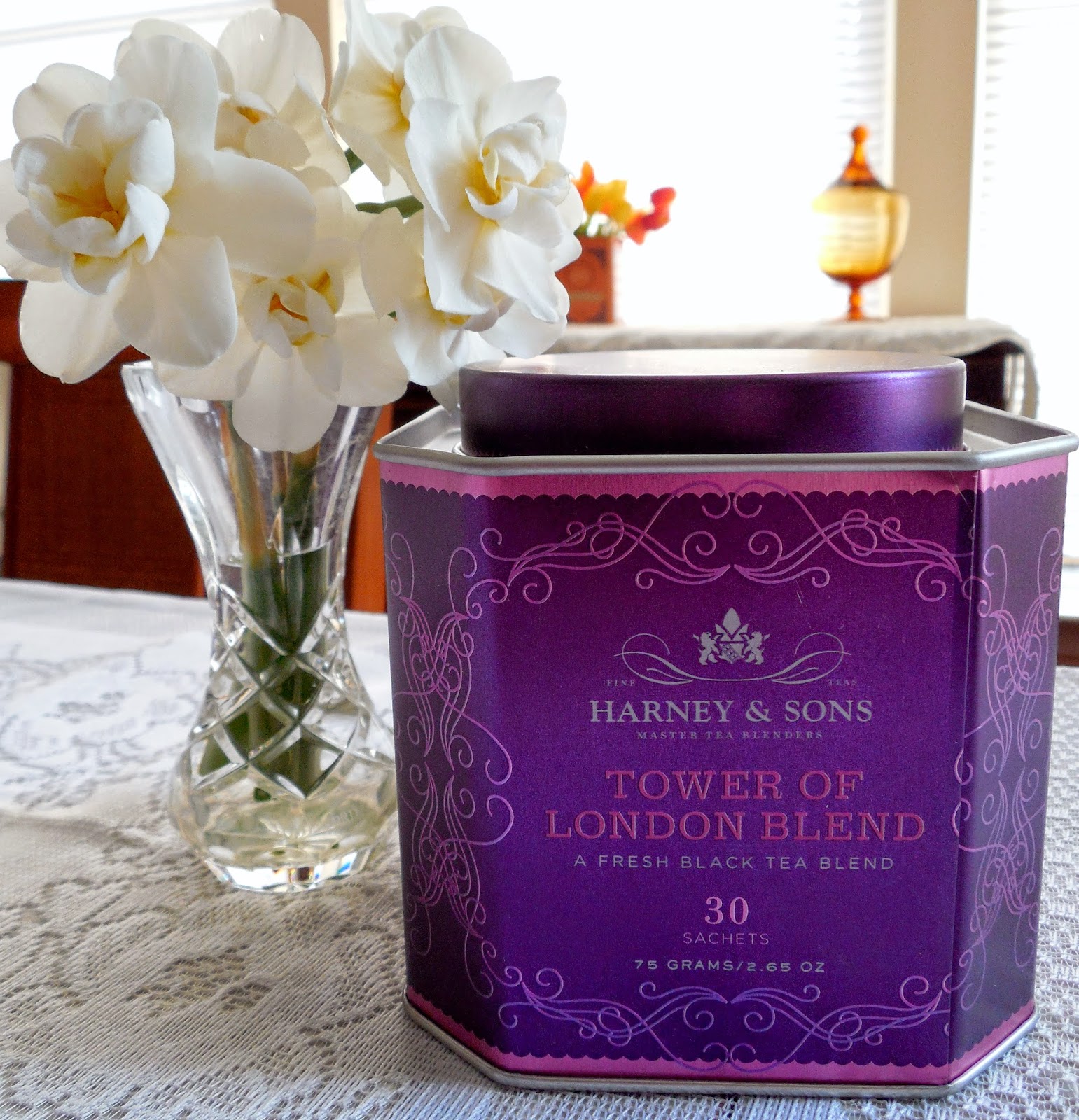 This official tea of the Tower of London is in looseleaf sachets.  Harney's website describes the tea as follows:  "Chinese black teas are stirred with pieces of dried stone fruit, then finished with oil of bergamot and honey flavor. This blend is reminiscent of Elizabethan preserves, flavorful and tempting."﻿ 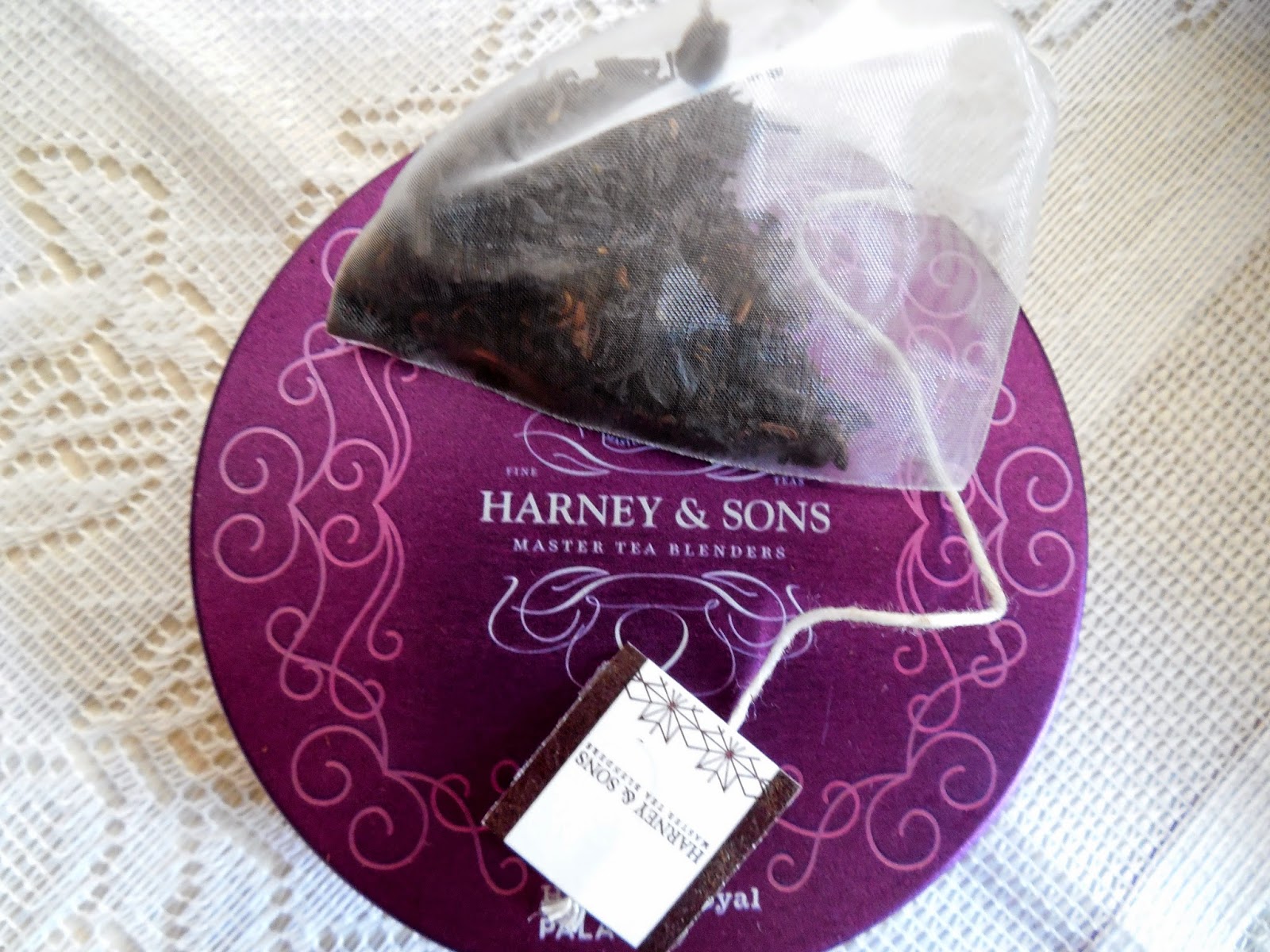 This tea is as delicious as it sounds and is one of my favorites reminiscent of Earl Grey, berries, and vanilla.  It is full of different flavors melding together into one blended whole--rather like the castle itself.  ﻿ 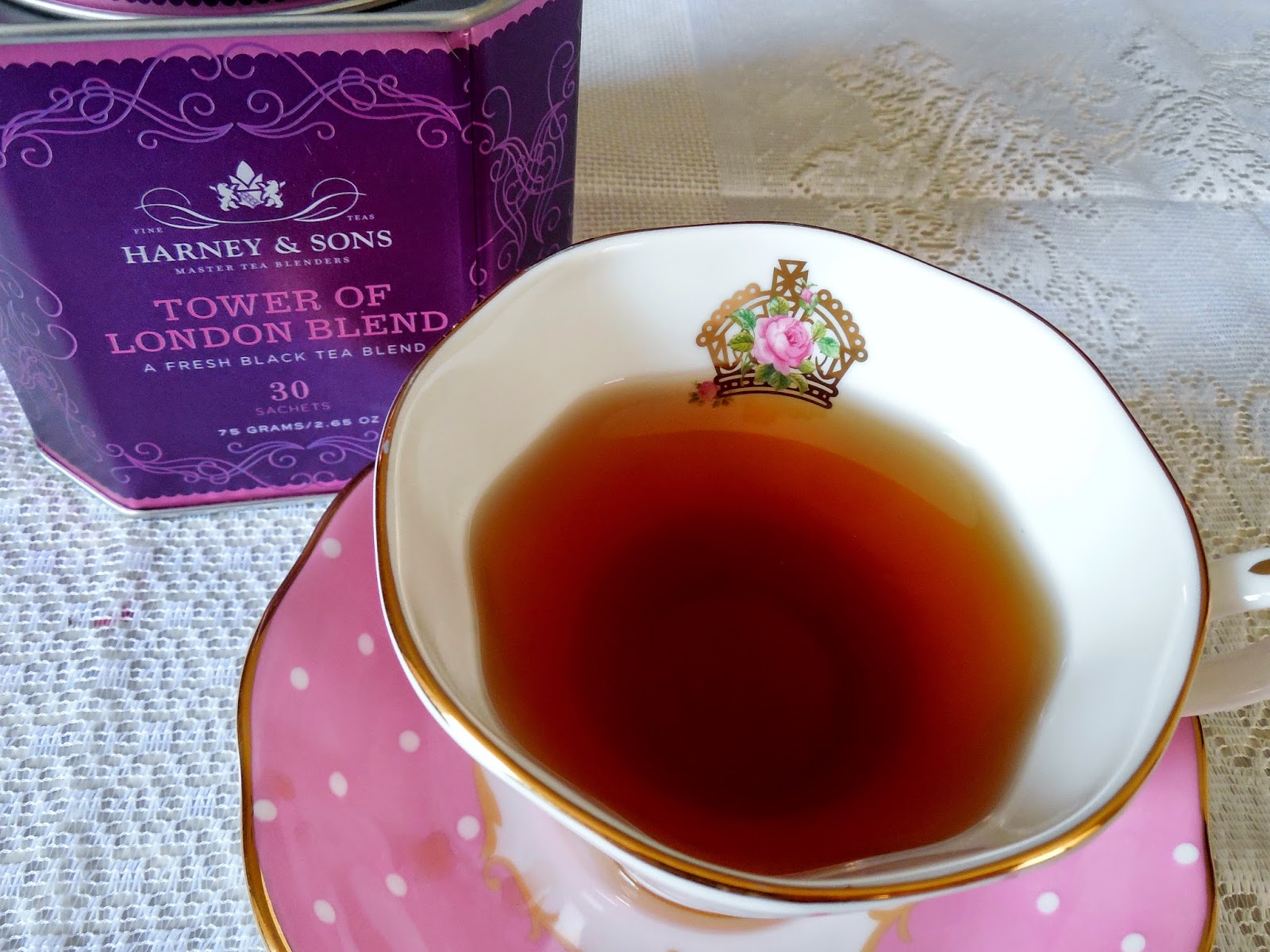 I am serving the Tower of London blend in my Royal Albert Cheeky Pink cup and saucer because I thought the gold crown in the inside of the teacup was appropriate for the Tower of London--the current home of the Crown Jewels, which are housed in the building below. 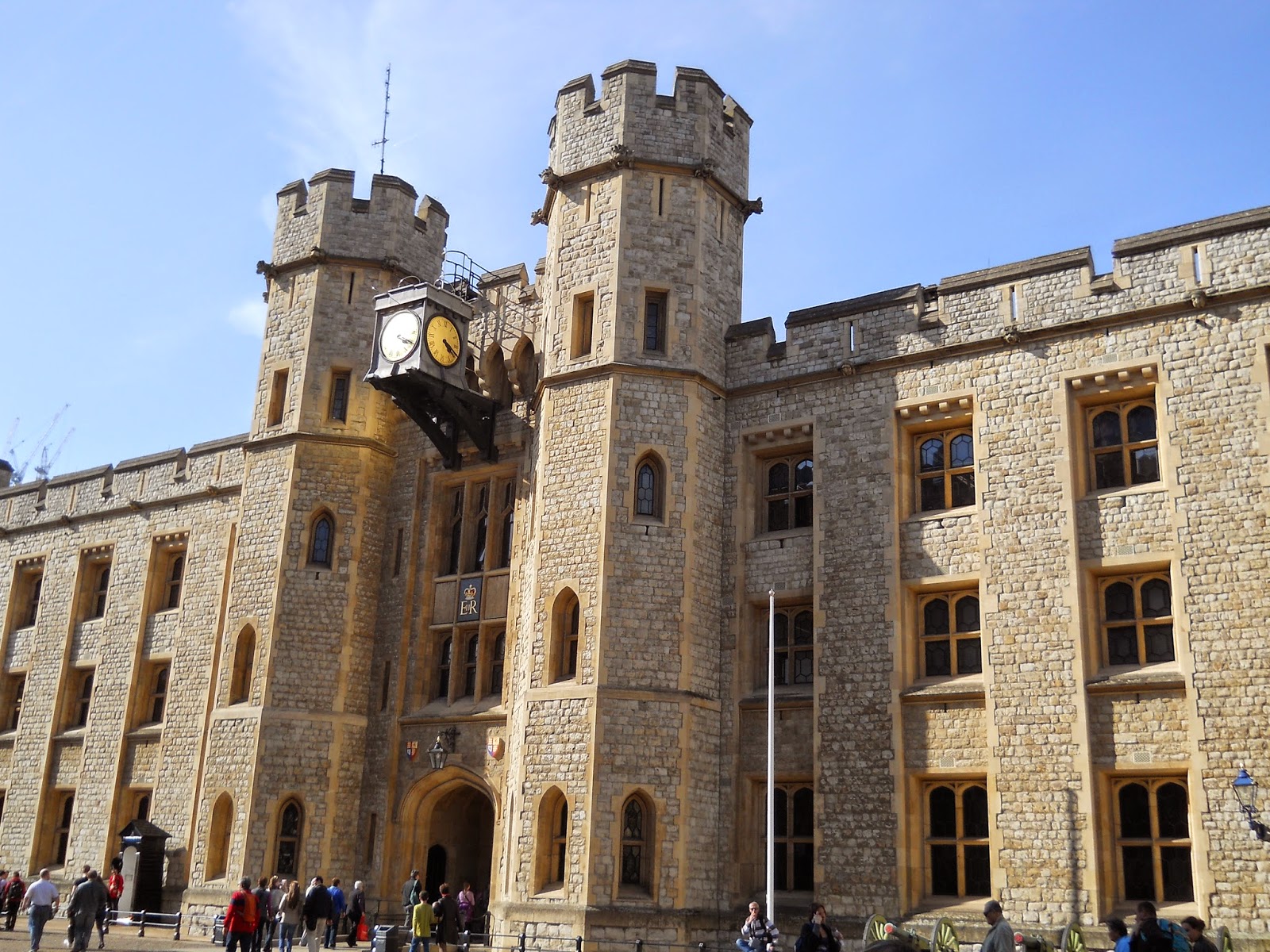 The jewels were truly amazing, but this was another time when cameras were not allowed.  But here is the fanciest crown jewel: 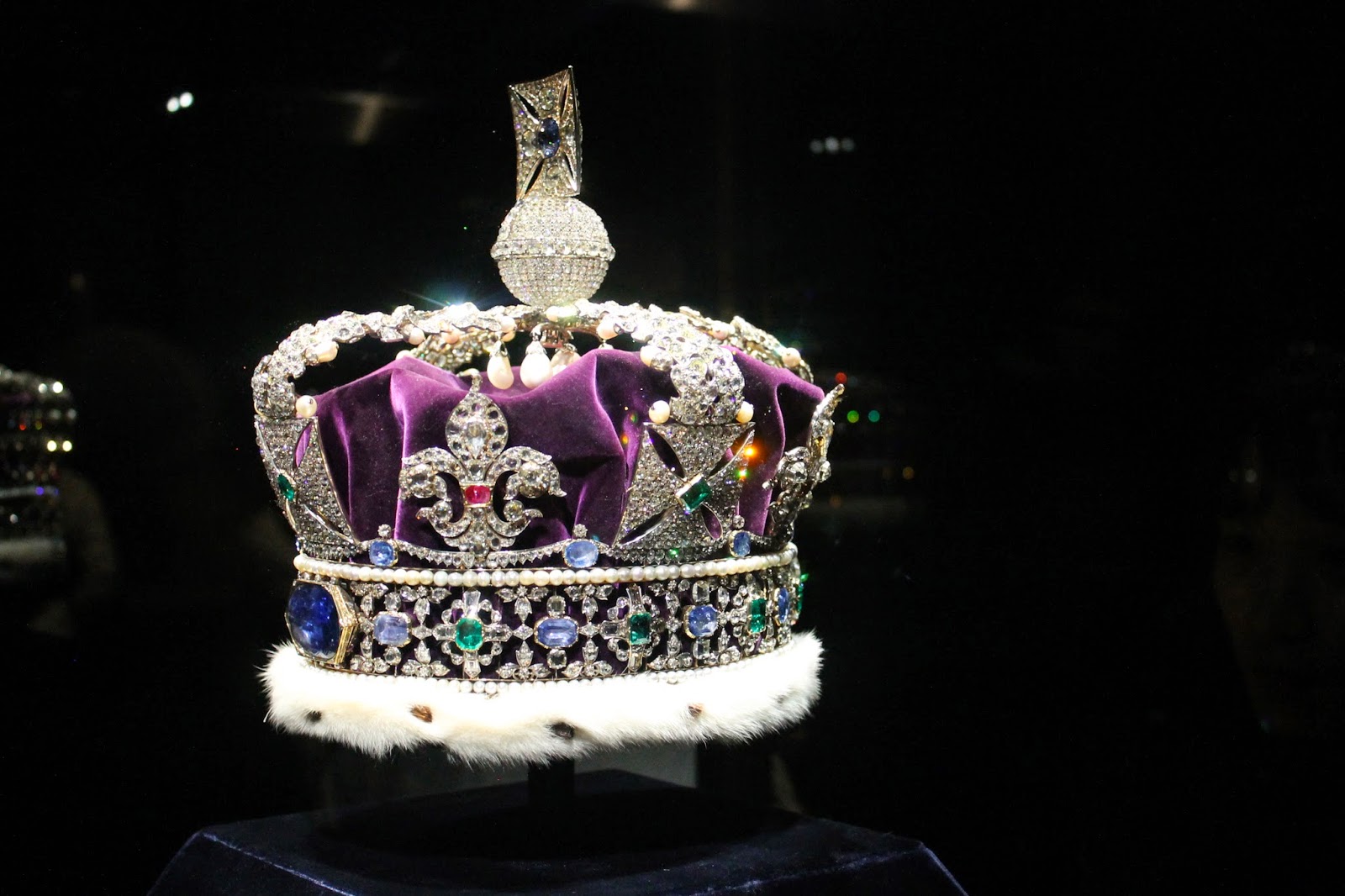 After being bedazzled, we went inside the different towers that make up the castle.  While making our way around the complex, we saw the Ravens of the tower: 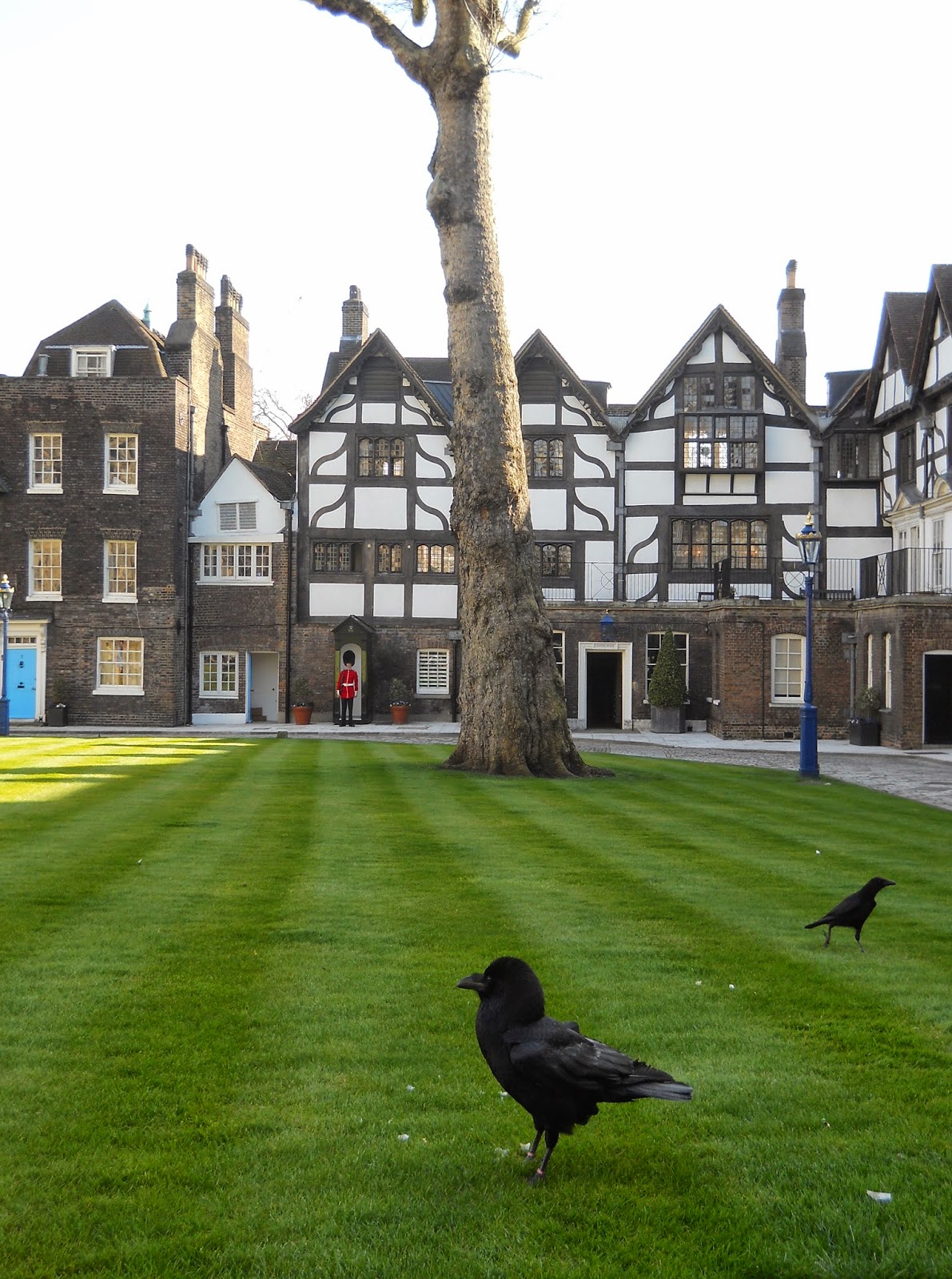 English lore provides that if the six ravens ever leave the tower, the kingdom and the tower will fall.  Therefore, the tower is the home of seven ravens (so there is always a spar!).﻿ 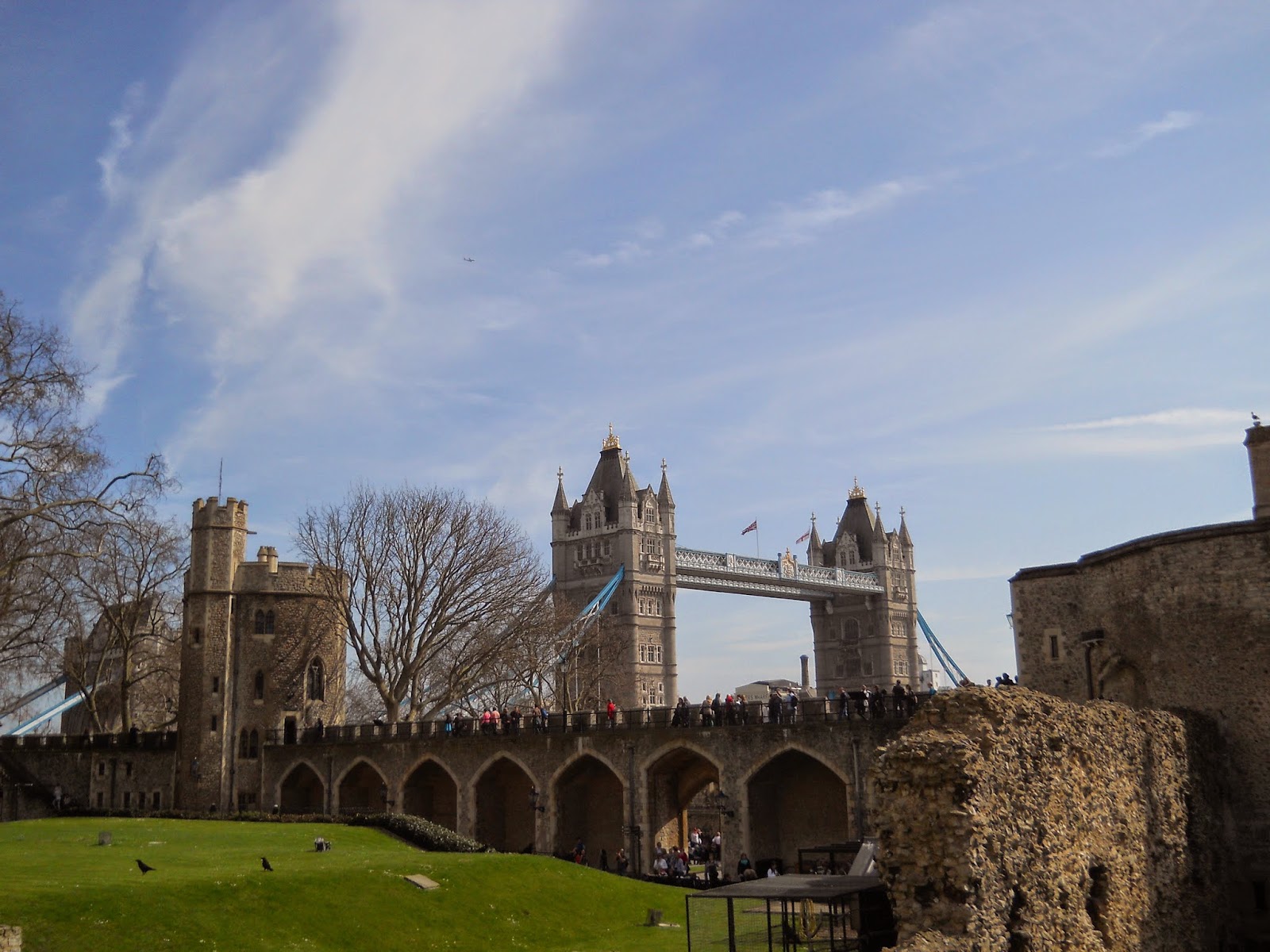 On the way out of the Tower, I snapped this picture of Tower Bridge which was visible over the castle wall.

After the Tower, Katherine and I raced back to our hotel to meet up with our tour group for a night cruise on the Thames, a beautiful way to say goodbye to London (for now) before beginning a bus tour through the U.K. and Ireland. 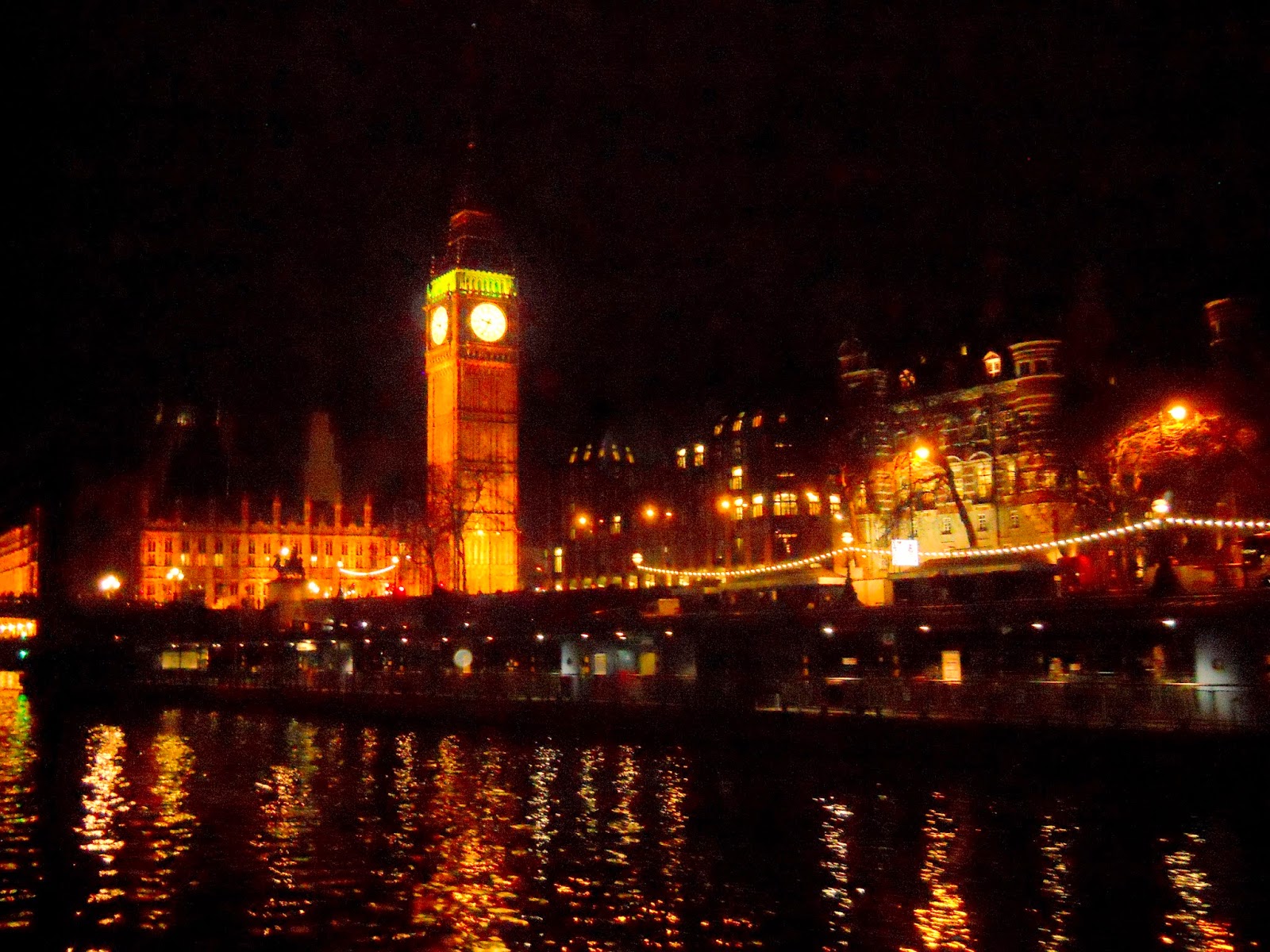