For this week's tea party, I thought I would share my fanciest tea party to date.  Last September a friend and I held a bridal tea for another friend, Pooja, at my house.  Pooja is Indian and she had a traditional Indian ceremony--complete with beautiful saris!
I tried to use Pooja's colors and some Indian themes in the menu and the decorations.  Pooja wore a traditional red sari for the ceremony with gold starburst designs throughout. 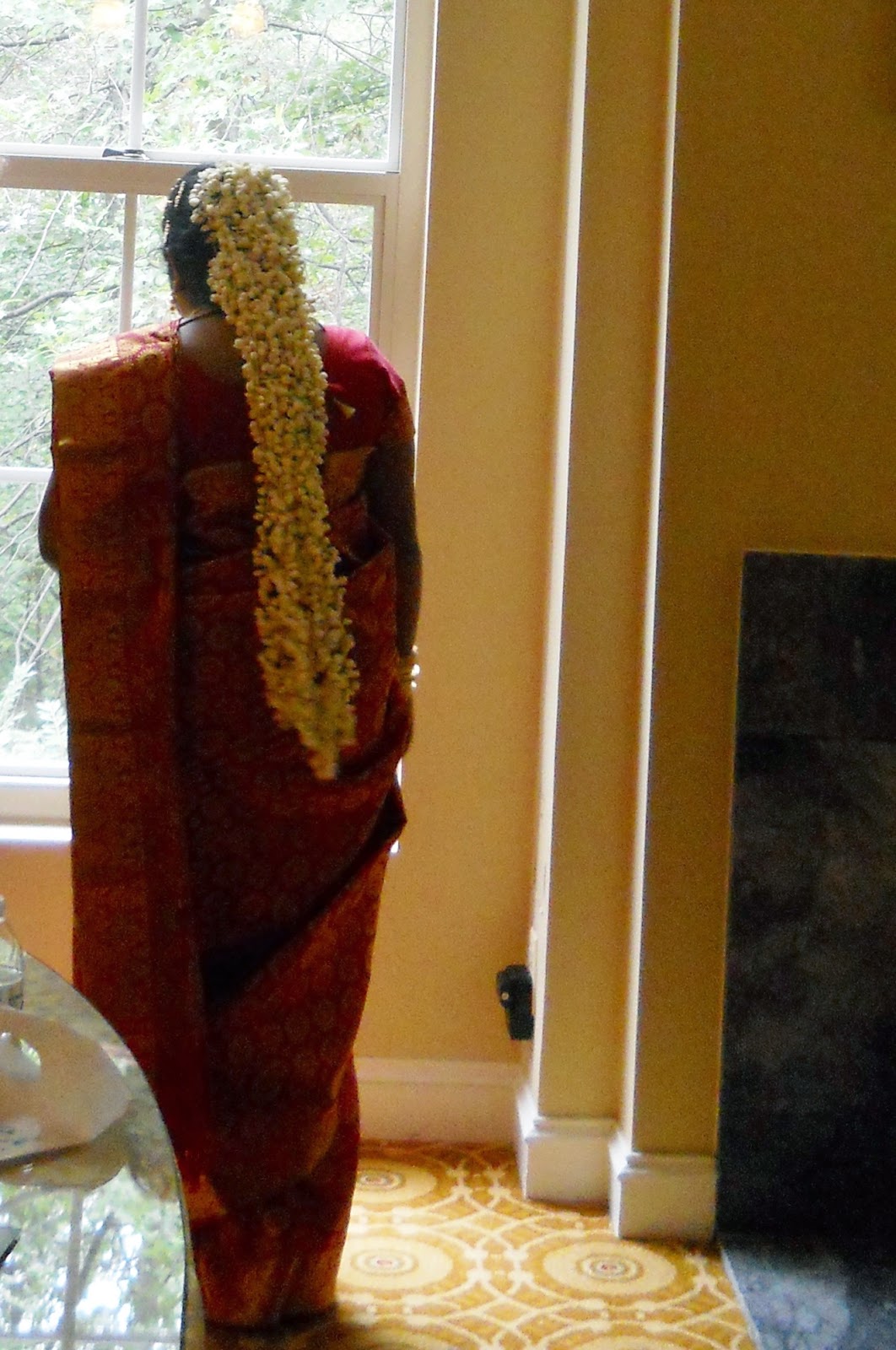 She later changed into a  purple skirt and top with lots of beautiful rhinestones in multi-colors for the reception. 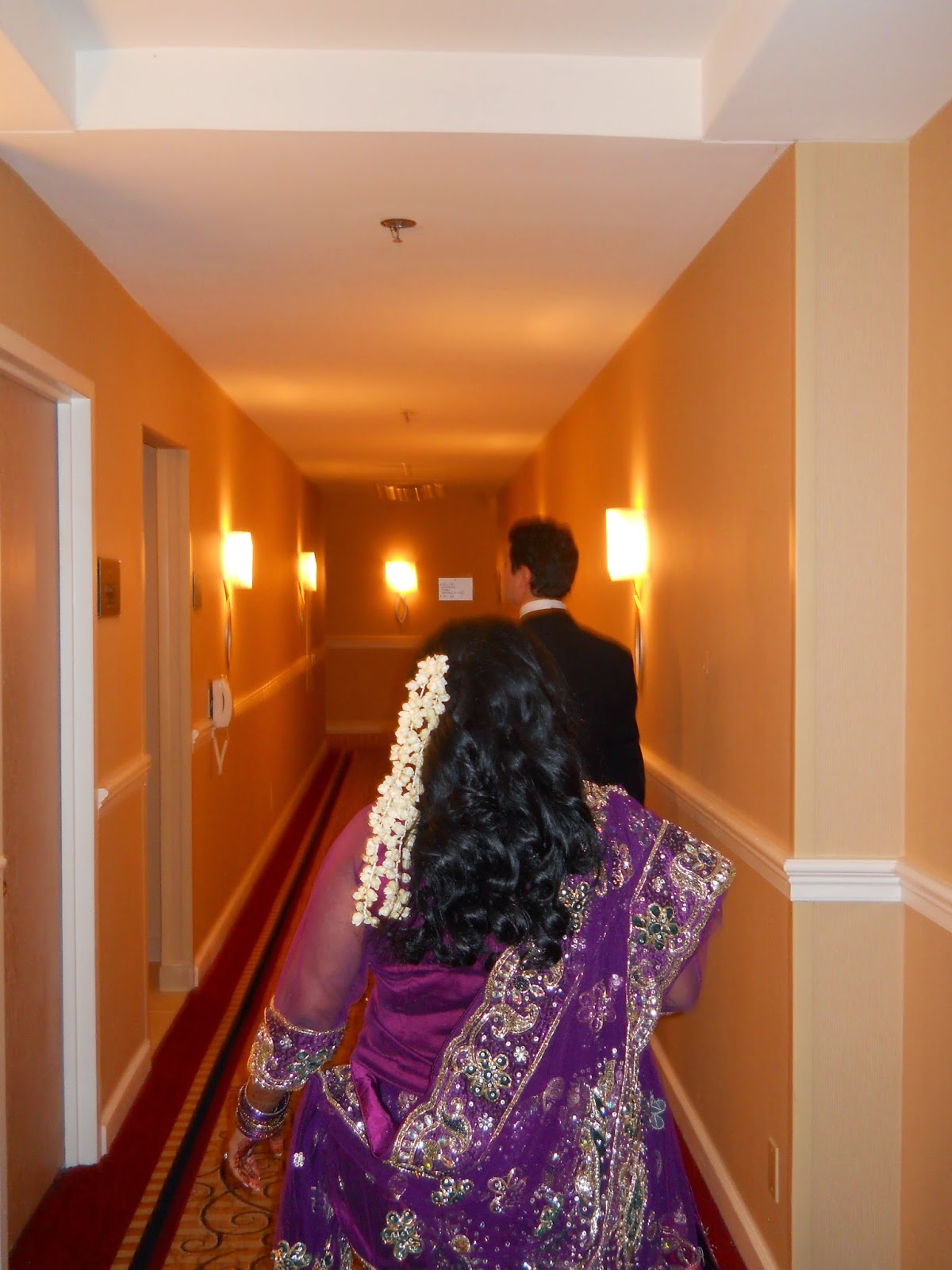 The bridesmaids wore saris in deep teal blue with gold and red accents. 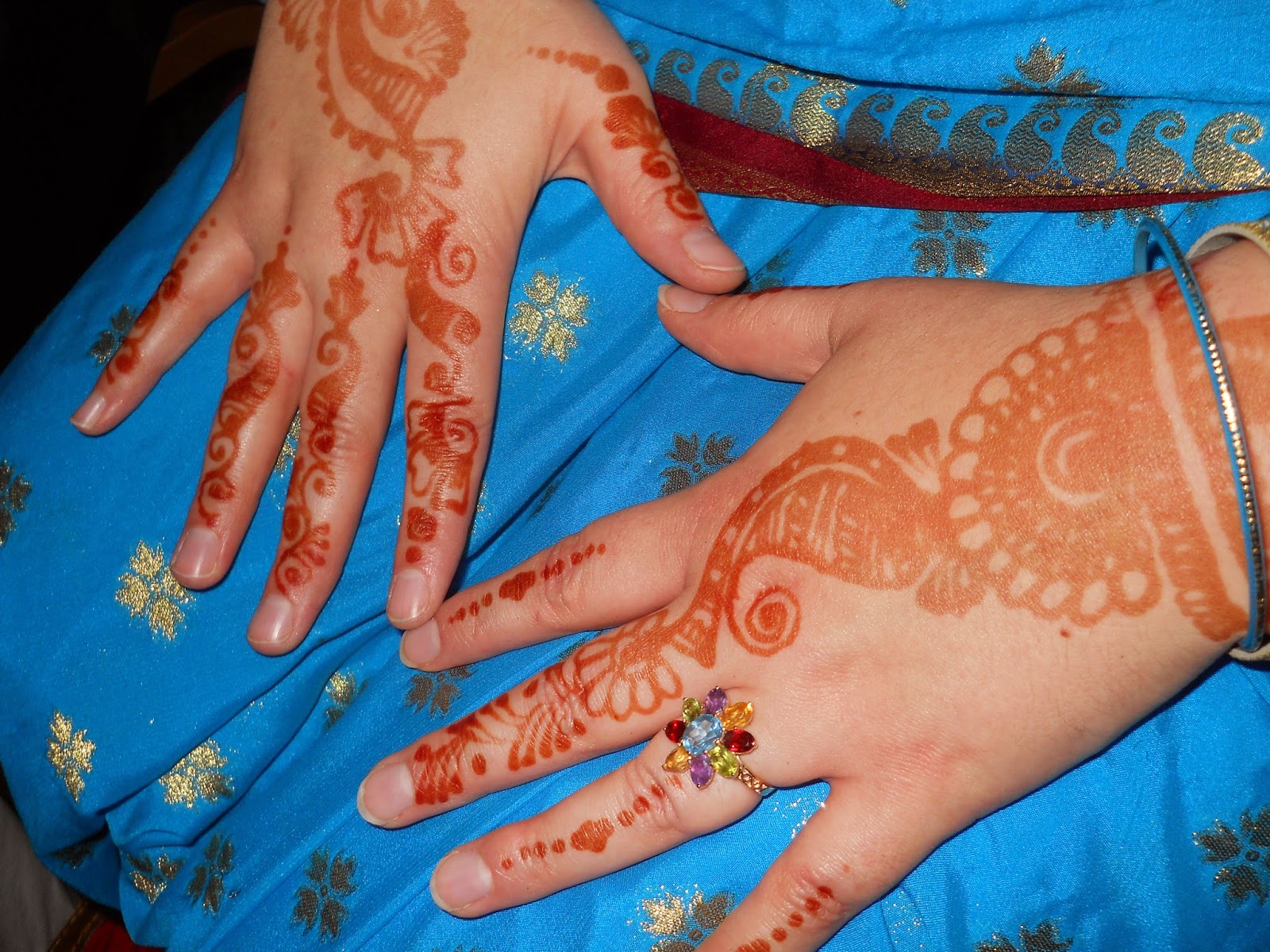 (Me at Pooja's wedding in the bridesmaid sari with henna on my hands)
As guests arrived, they were greeted in the foyer by the invitation, a picture of the happy couple, and colorful flowers and red wedding bells hanging from the ceiling. 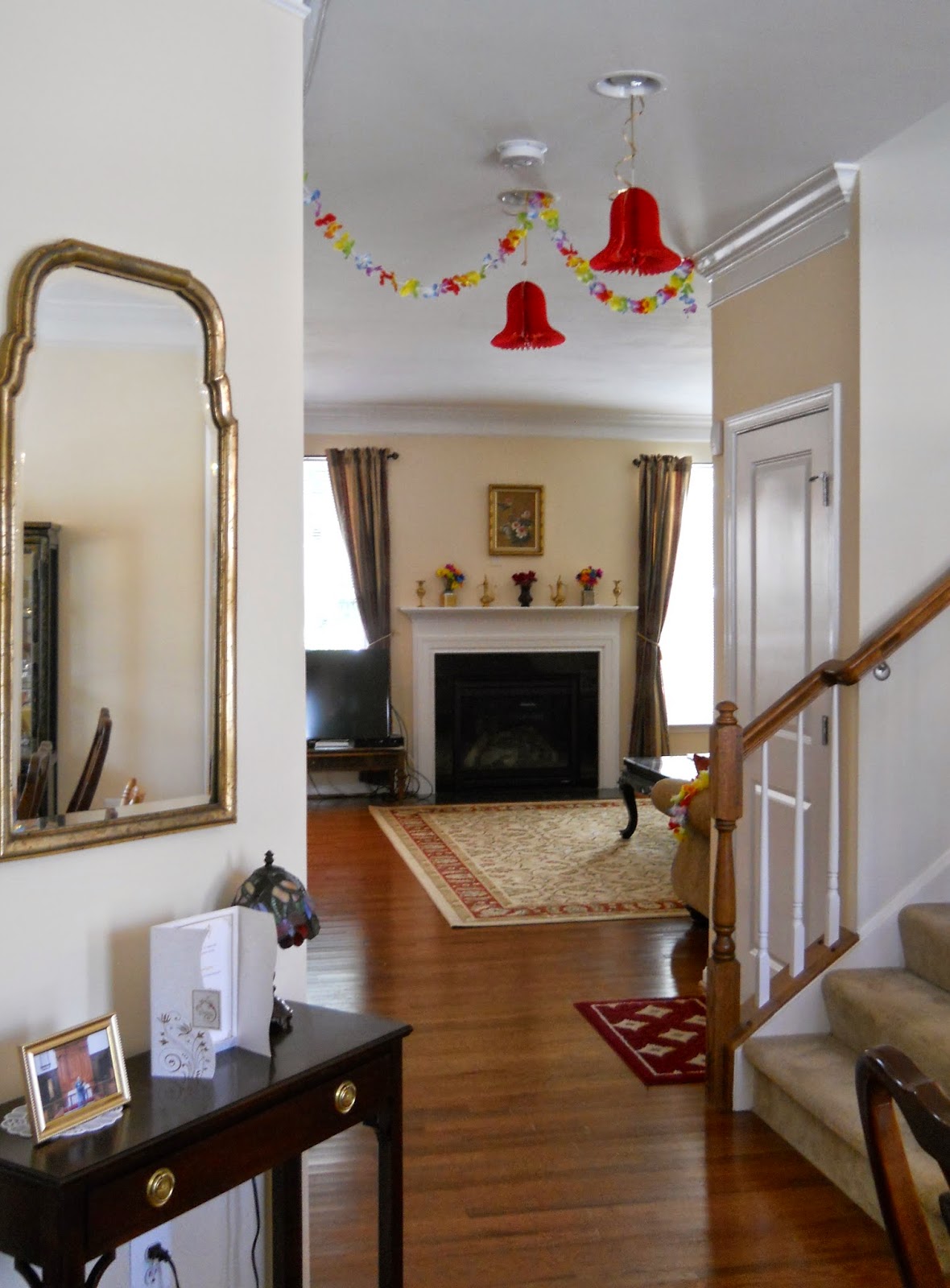 ﻿
﻿
Also to the right as you enter is my dining room. 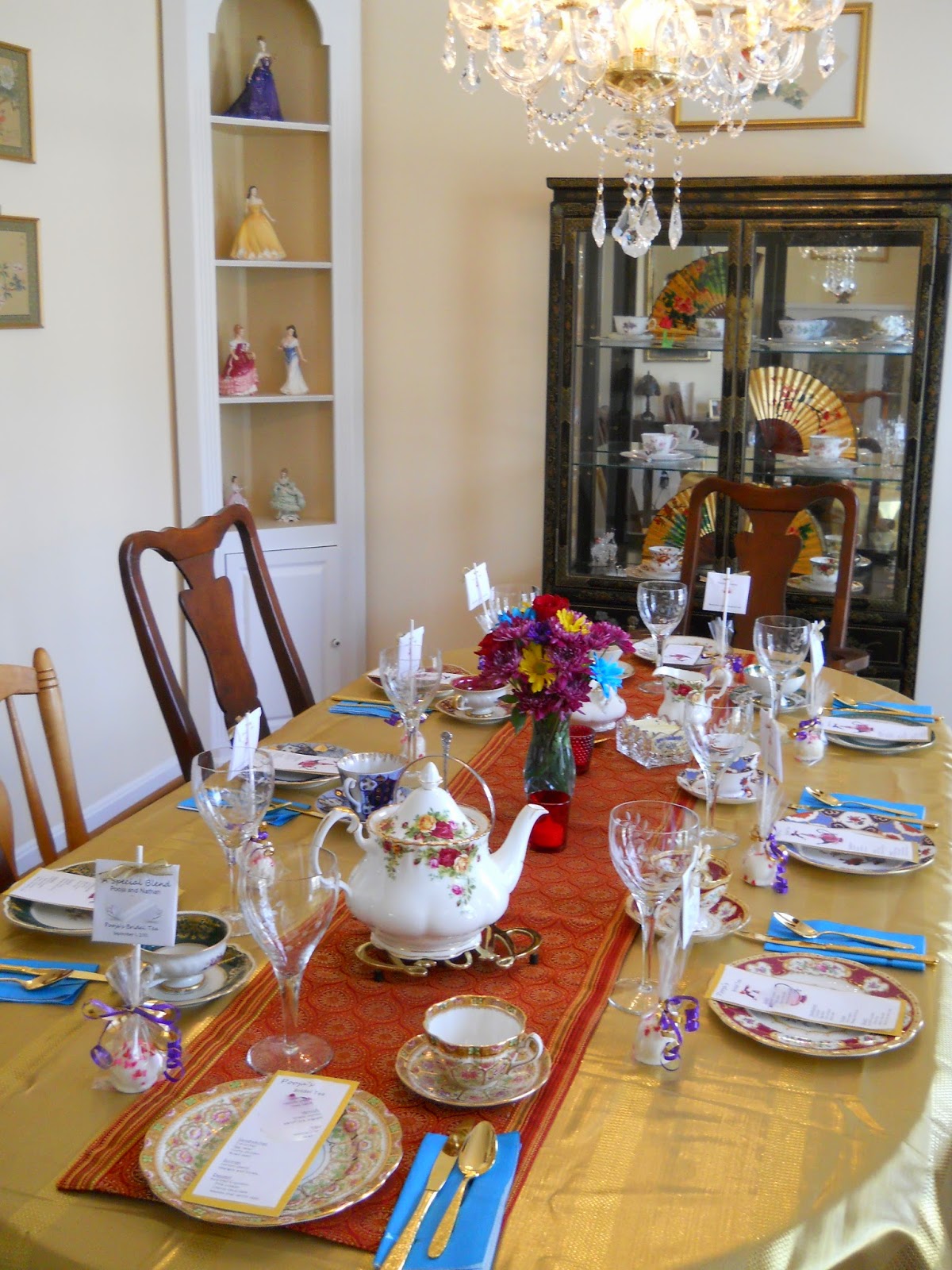 I borrowed a gold table cloth and bought a red and gold runner at Pier 1.  I also found teal napkins the same color as the bridesmaid dresses.  The flowers are a mixture of simple daisies in bright teal and yellow, red roses, as well as purple flowers.  I also borrowed my mother's goldware for the party, which I love to use with my gold tea china!
Here is a closer look at the pattern in the runner that reminded me somewhat of the starbursts in Pooja's sari: 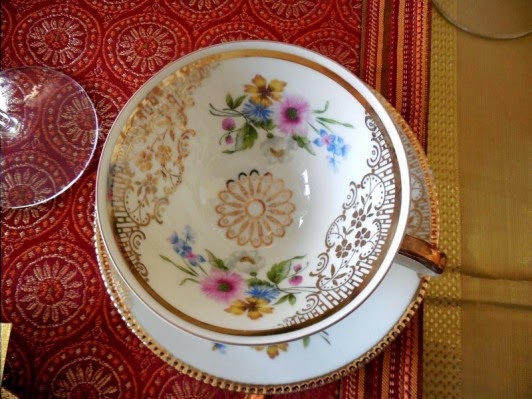 (picture taken by my friend and co-host, Amanda)
As guests walked towards the back of the house they were greeted first by my kitchen, which was also decked out for the party. 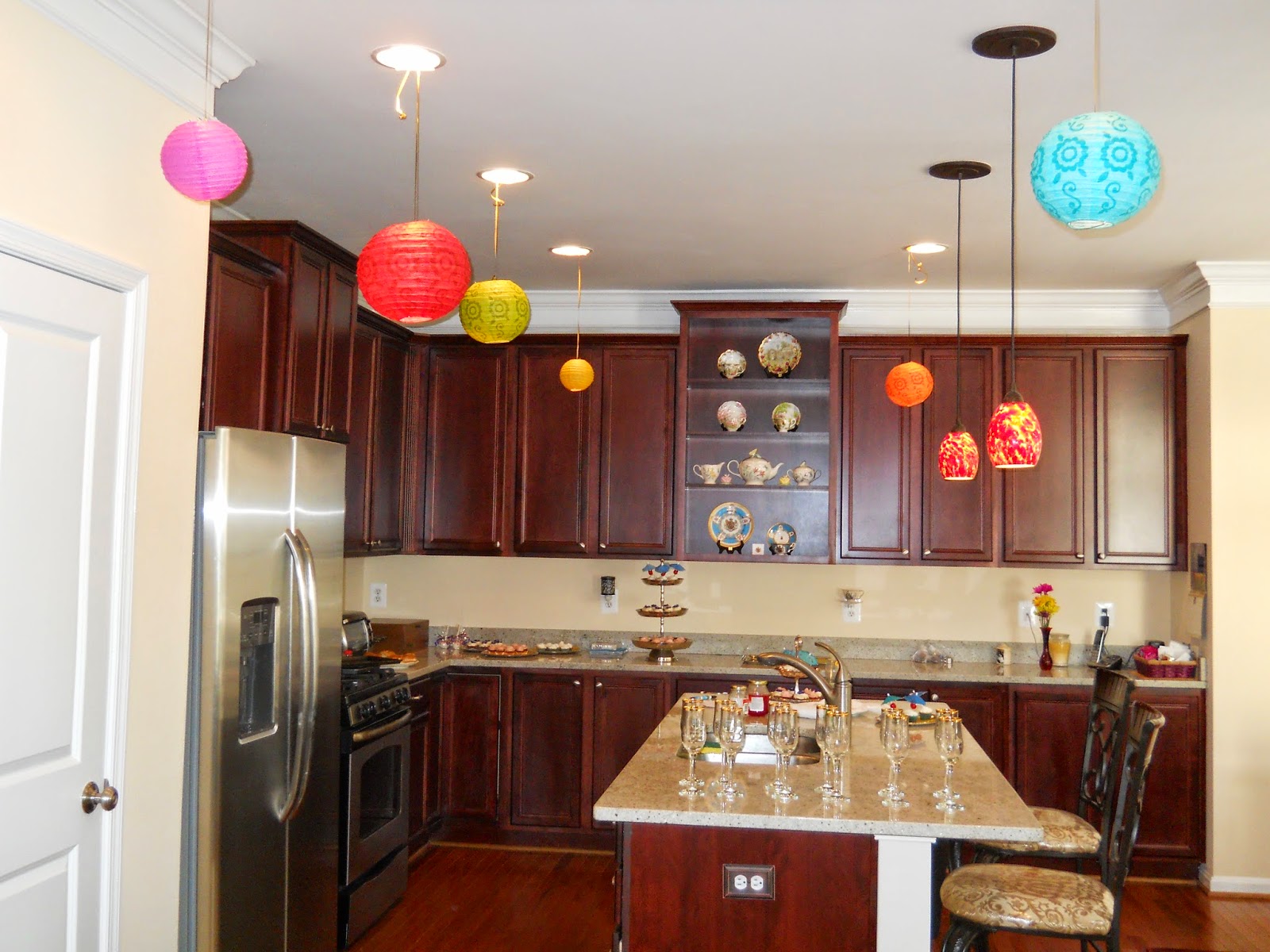 I hung paper lanterns in bright colors from the pot lights in the kitchen.  A champagne glass waited for each guest at the end of the counter and they had a choice between strawberry sparkling wine or a non-alcoholic sparkling mango apple cider.
There were 12 people for this tea (the largest one I have done to date), so I set a second table in the breakfast nook. 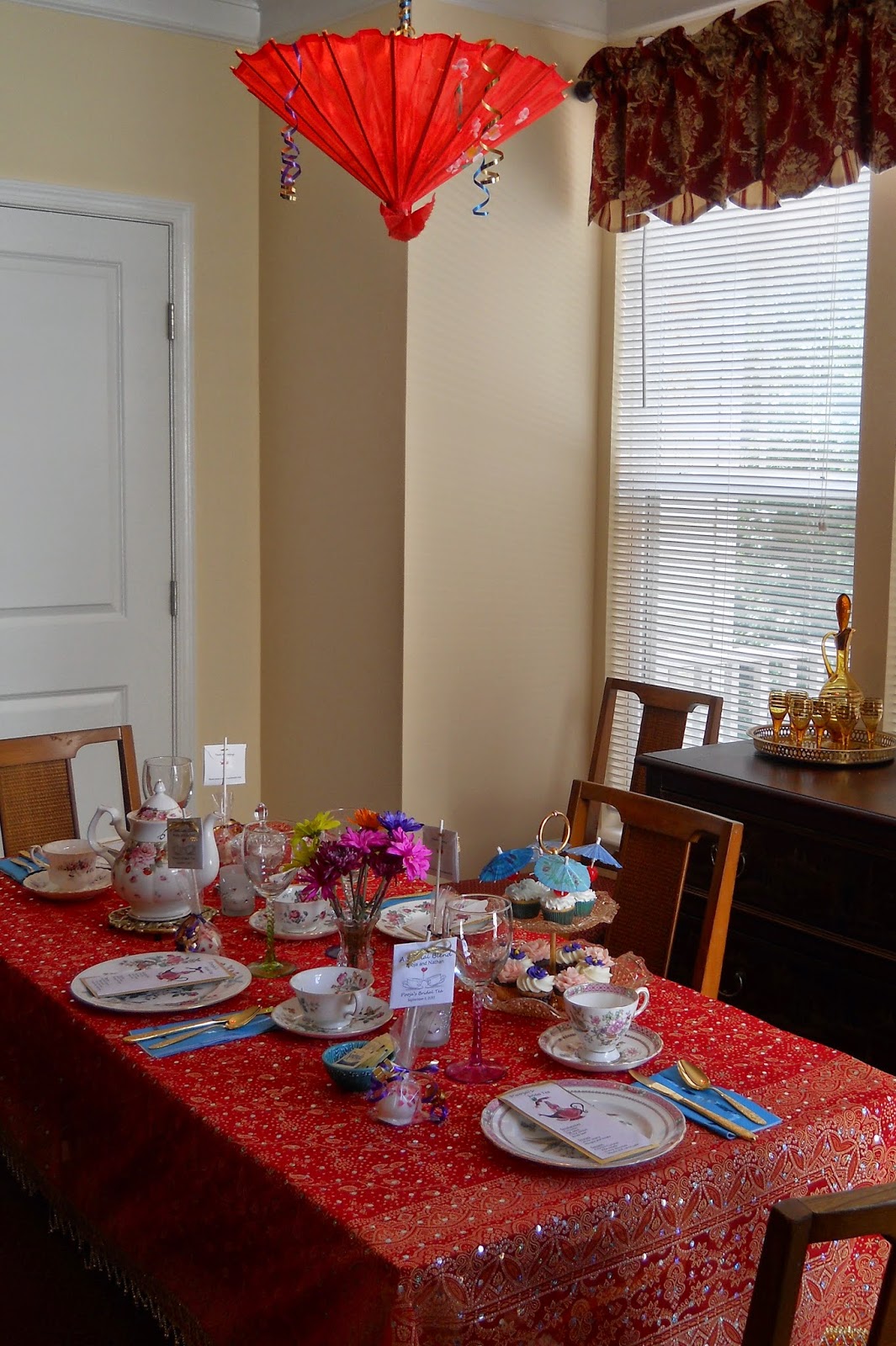 ﻿
I borrowed a red tablecloth from my mother with a paisley pattern with a gold bead border that  Pooja's mother said looked like an Indian pattern (which I counted as a success!).  I bought a small child's umbrella in red from an Asian import store in Chinatown in D.C., drilled a hole in it, and hung it from the chandelier in the kitchen.  I used gold, purple, and teal curling ribbon to cover the handle and drape down the sides of the umbrella.  It turned out so pretty, that I later went back and bought some in different colors for future parties.
I also borrowed a white and gold elephant painted by my mother to use as a flower arrangement on the small buffet in the breakfast nook.  Elephants are an important symbol in Indian culture, in fact, Pooja's wedding invitation had a stylized elephant on it. 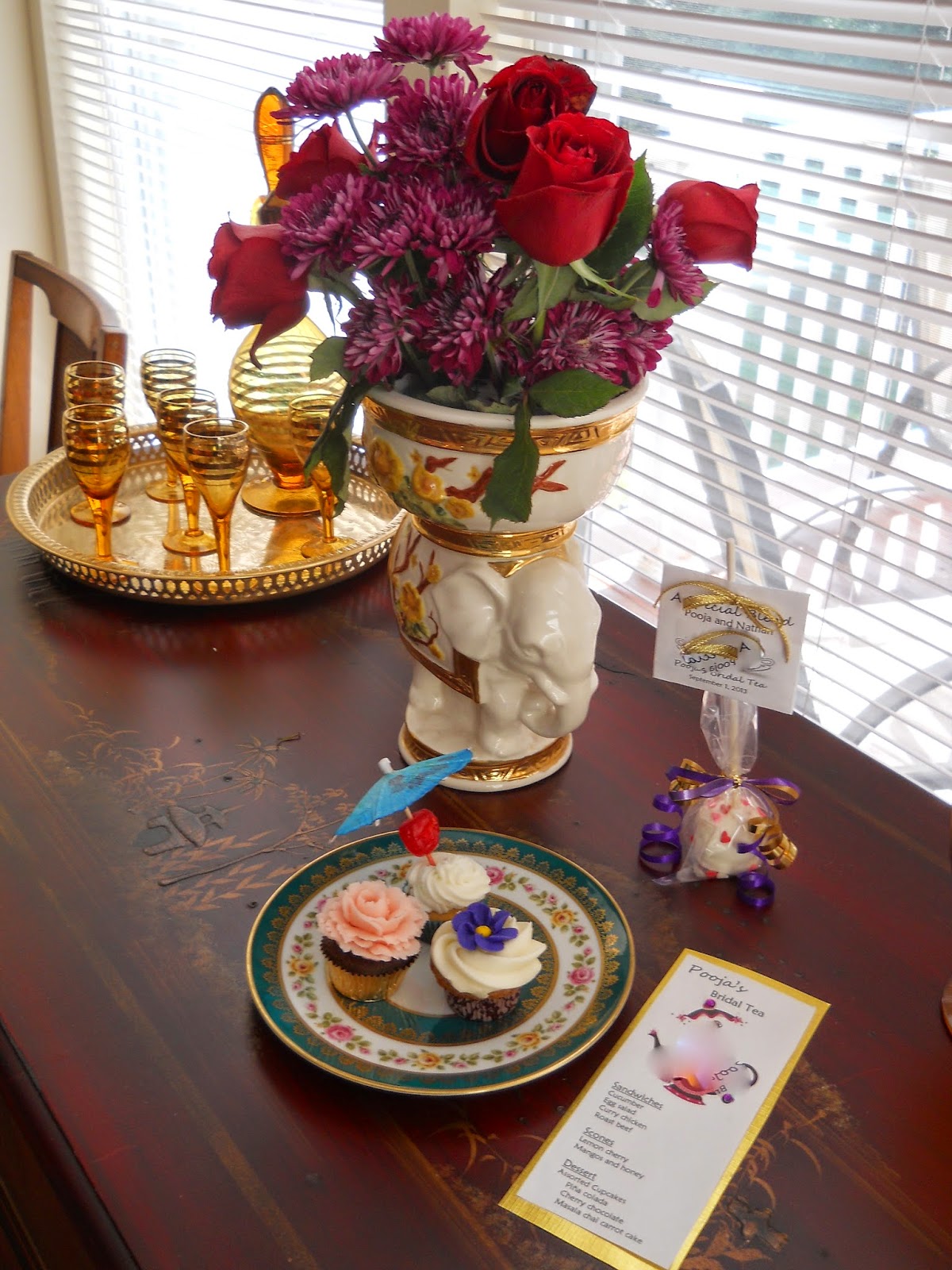 I made a cakepop favor at Pooja's request with a custom-made teabag wrapper at the top that said "Pooja and Nathan, a Special Blend."  I bought Tea India's cardamom chai to put in the wrappers.  Also pictured is the menu for the tea.  Unfortunately I used clipart from the internet for the teabag and the menu and I can't remember where I found it, so I have distorted the picture just in case.
Also pictured are the three cupcakes I made for dessert. Here is another view of the cupcakes as served to the small table on my gold glass tiered tray: 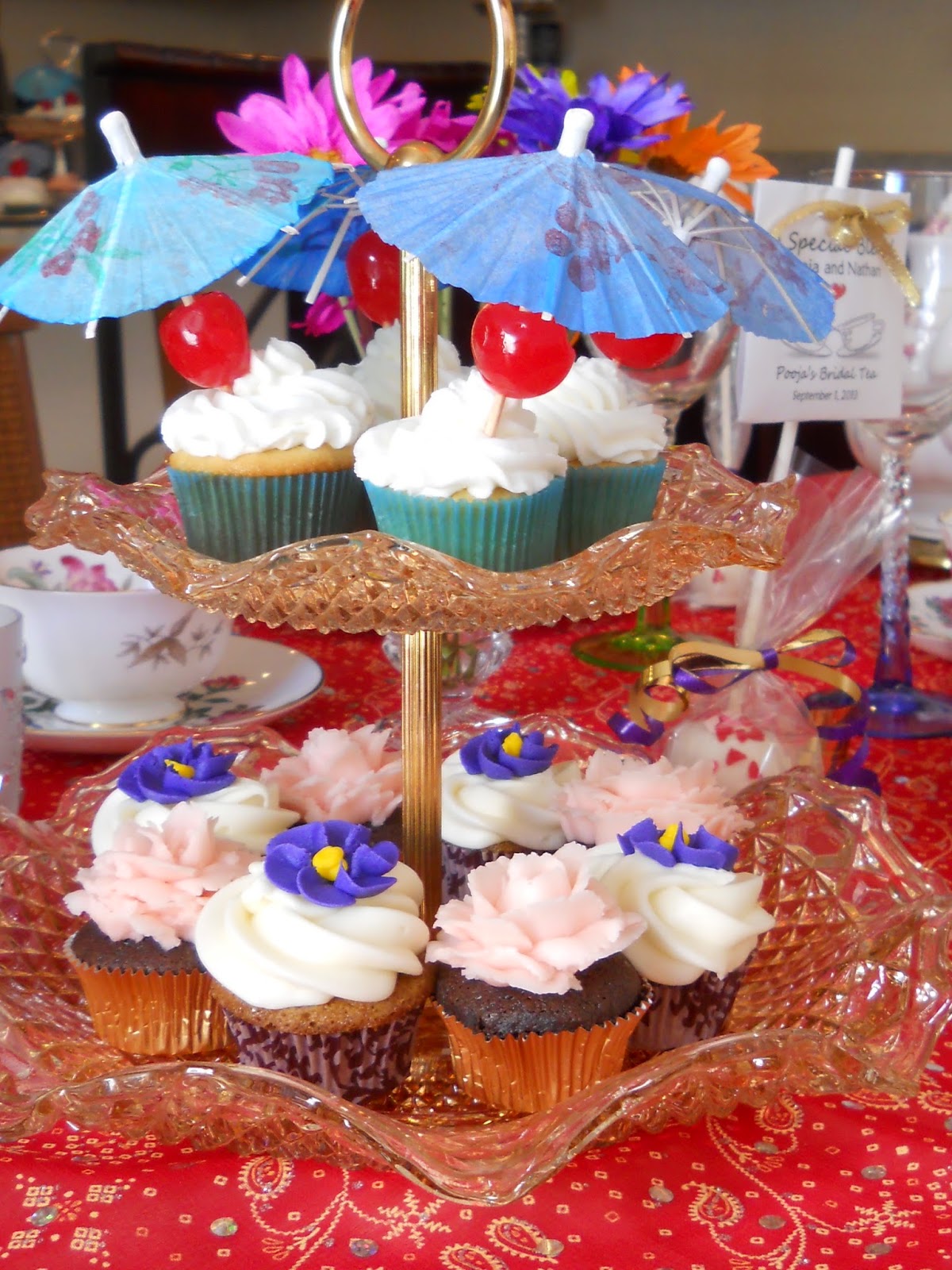 I'll be sharing more on the menu and how I worked in the Indian theme, including more information on what these cupcakes are as well as the recipes for them.
Thanks for stopping by!  I am sharing this tea on:
Friends Sharing Tea at Bernideen's
Tea Time Tuesday at Rose Chintz Cottage
Tea Cup Tuesday With Martha
And With Terri

Email ThisBlogThis!Share to TwitterShare to FacebookShare to Pinterest
Labels: My Afternoon teas