This week my tea cart goes patriotic to celebrate the 4th of July, Independence Day! 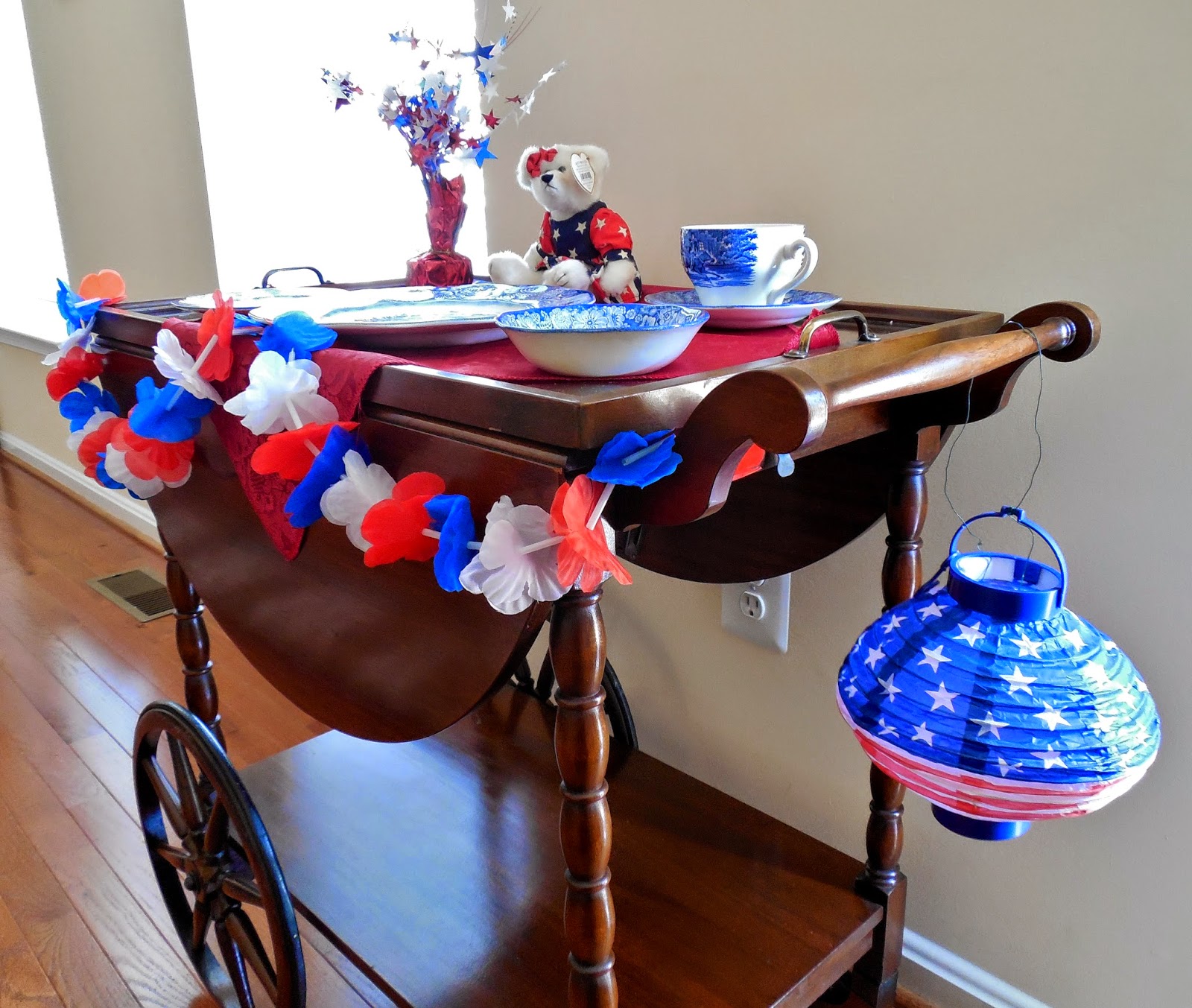 I have a special five piece set I wanted to share today. 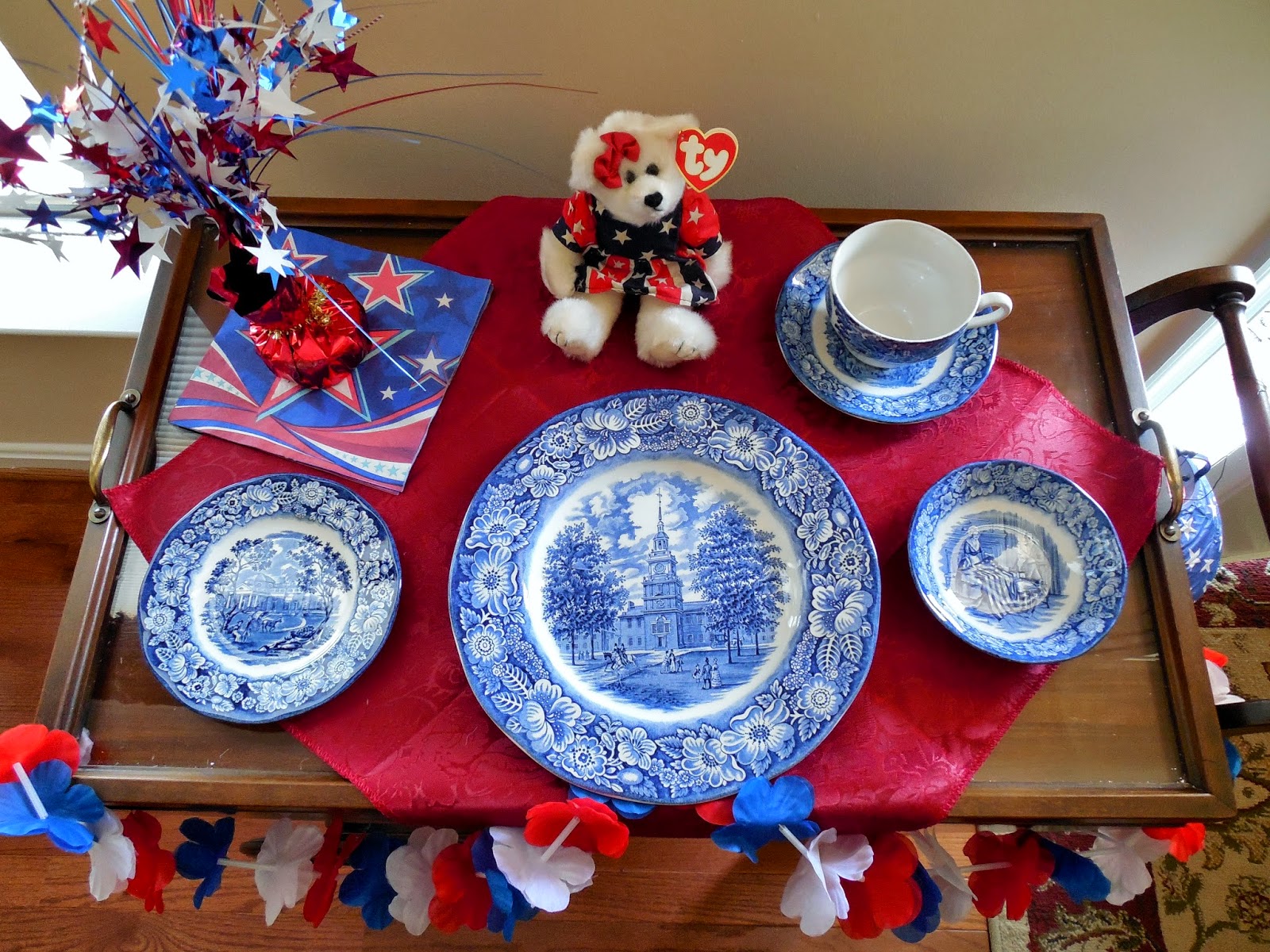 My mother has always had a blue plate on her kitchen hutch with a colonial scene, and I thought of it when I was trying to decide what to do for the 4th of July.  I asked her what happened to that plate and if I could borrow it, but she couldn't find it.  We happened to go into a local antique store over the weekend and low and behold I found an entire five piece set of that same china!  I knew I was supposed to get it, and it was way more elaborate than I had realized.

Here is a close up of the dinner plate of the Liberty Blue collection.  This is the same as the plate my mom had. 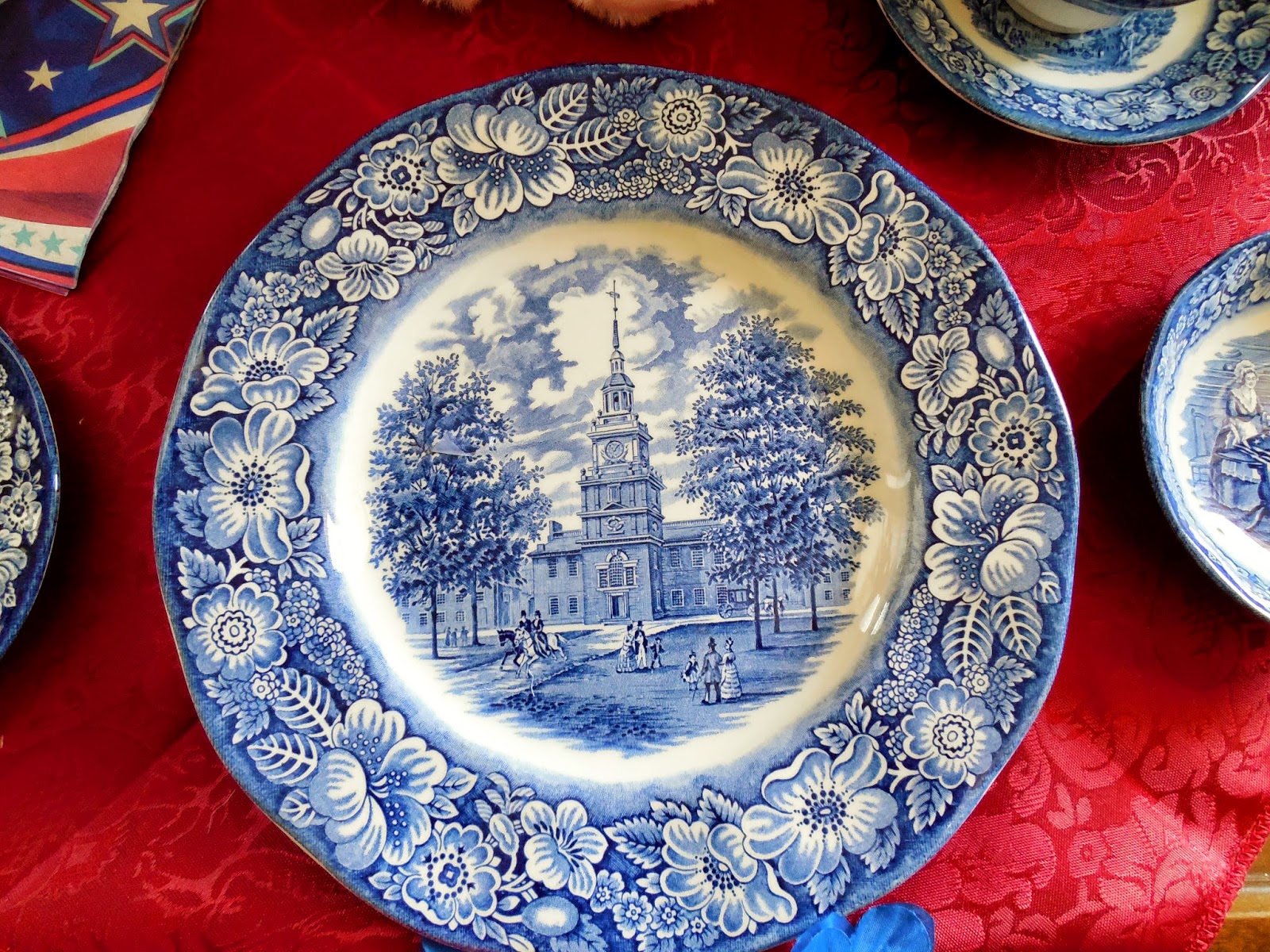 This plate depicts Independence Hall in Philadelphia, Pennsylvania, where the Second Continental Congress met, George Washington was nominated commander-in-chief of the continental army, and where the Declaration of Independence was approved on July 4th, 1776 (and why the Fourth is called Independence Day).

The little bread plate we found with the set also has an important link to the Declaration of Independence.  It includes a scene of Monticello, the home of Thomas Jefferson, the author of the Declaration.  Monticello is located in Charlottesville, Virginia (my home state!). 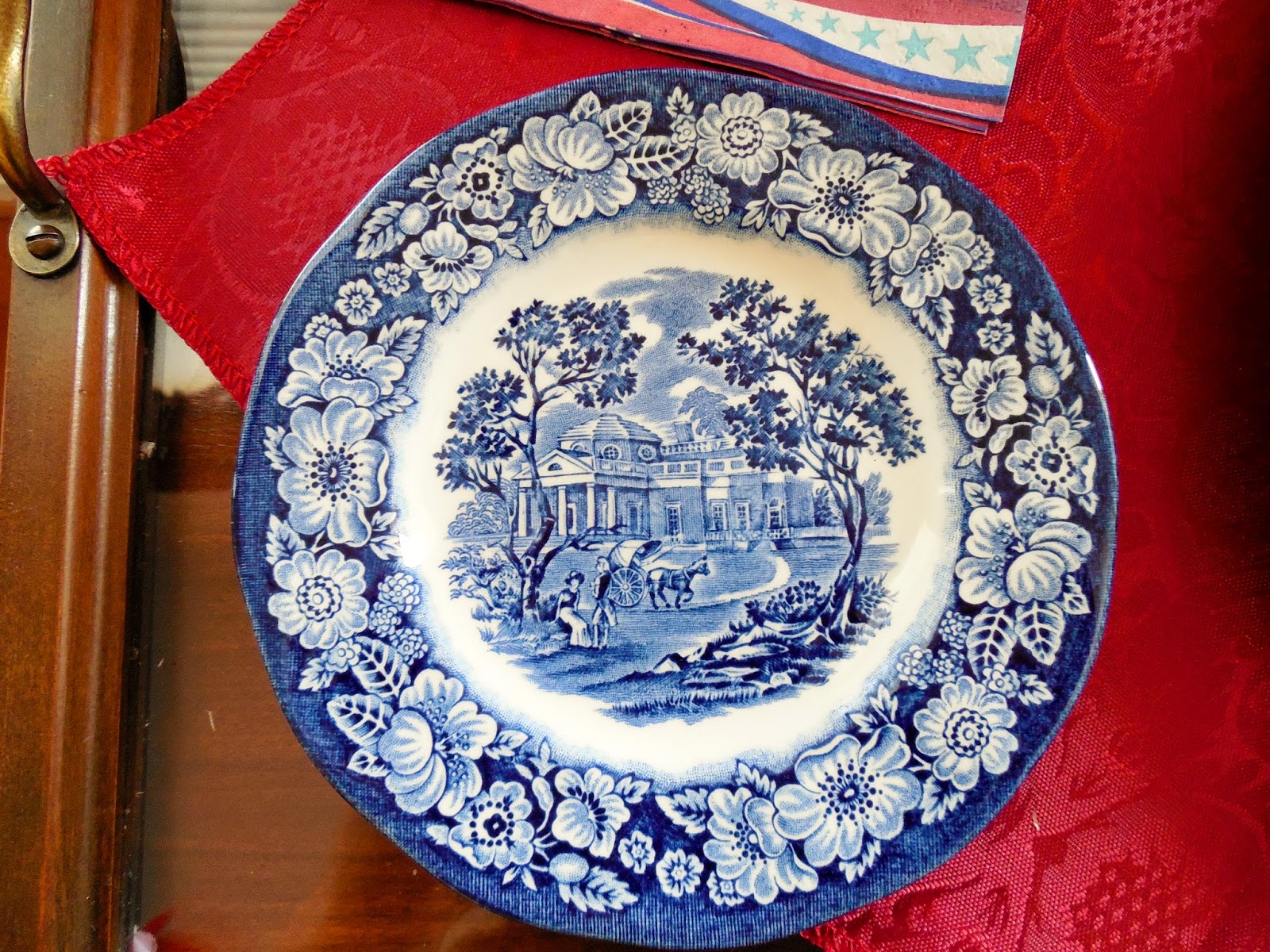 Next we have a small shallow bowl with Besty Ross, who is credited with making the first American flag, which she then presented to George Washington.  That scene is depicted in the middle of the bowl: 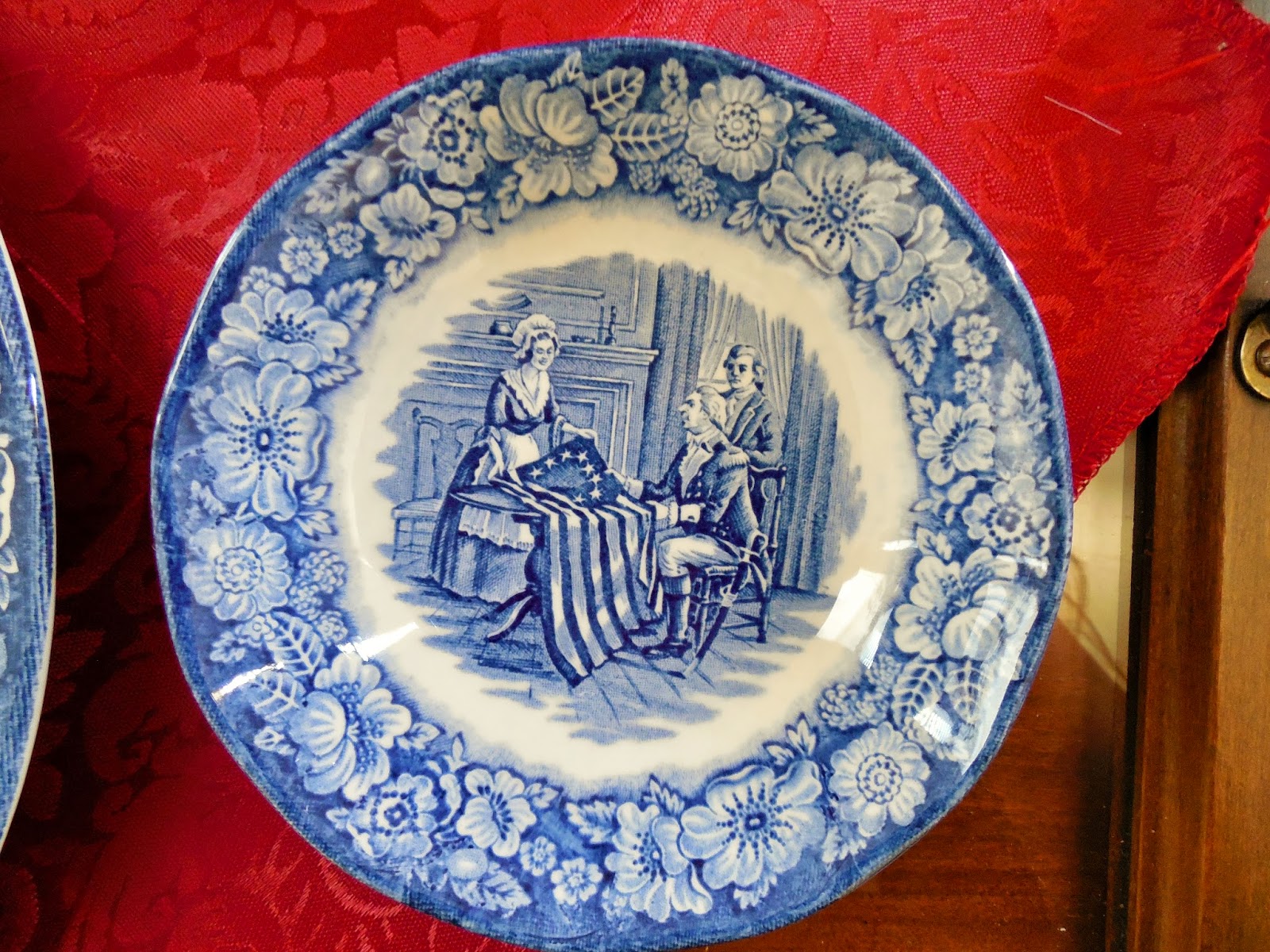 Now we get to the most amusing part (at least for me) of this set.  When I turned the bowl over... 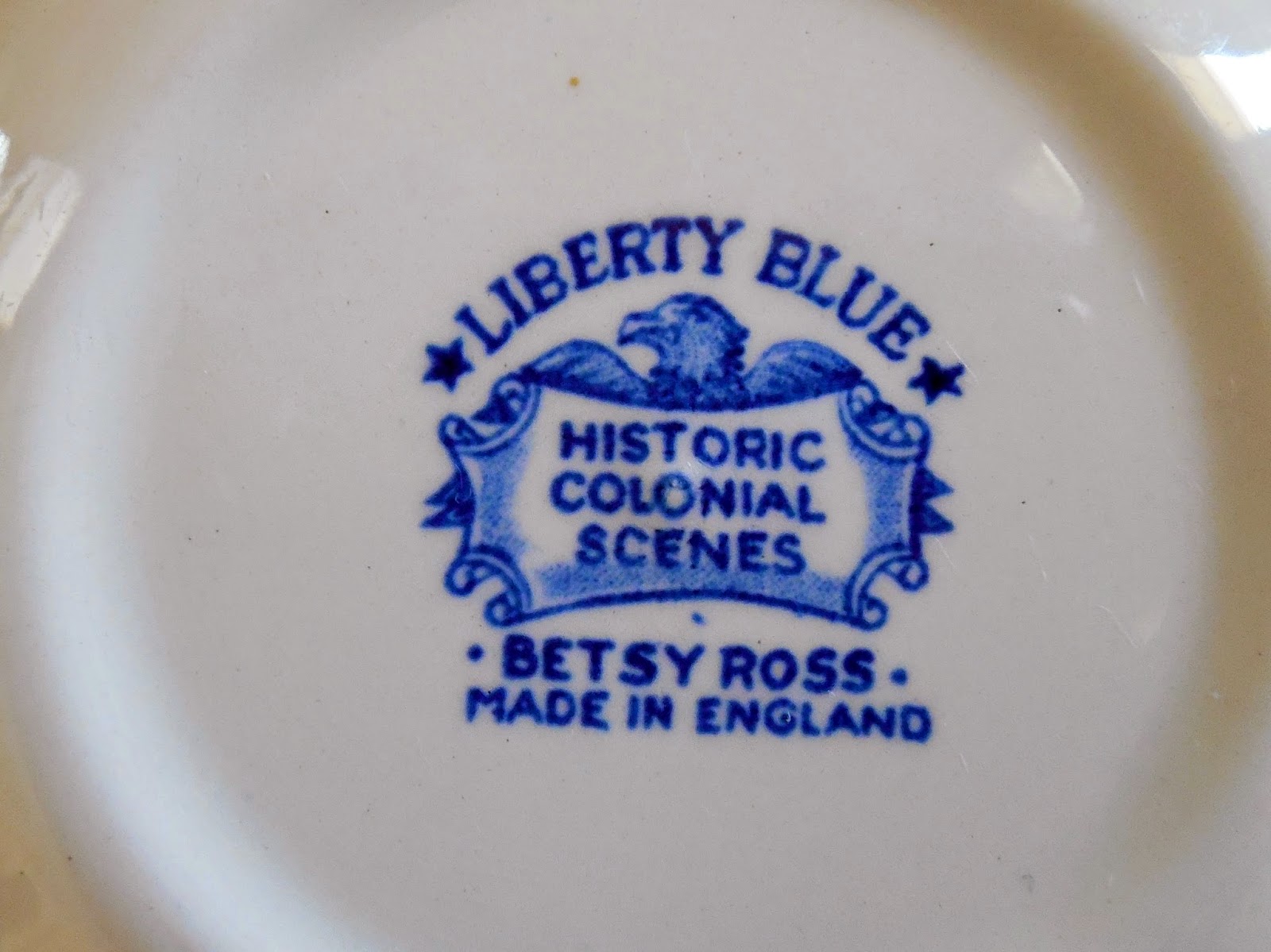 I learned this china was made in England!  Which is a good segue in the last part of the set I purchased, the cup and saucer: 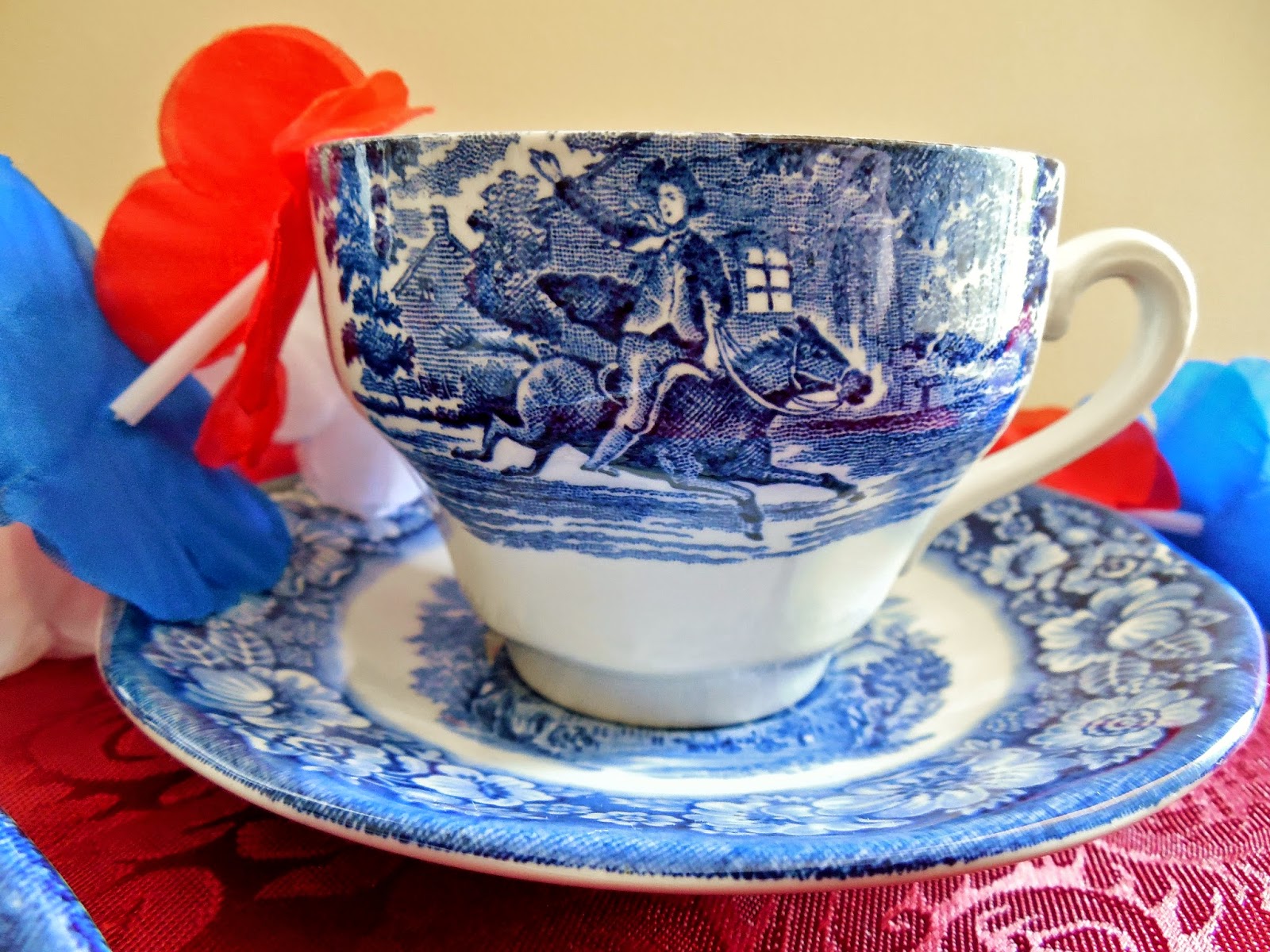 Paul Revere's ride announcing that the British were coming!  More on this cup and saucer set tomorrow--I'll be serving a special tea perfect for this cup. 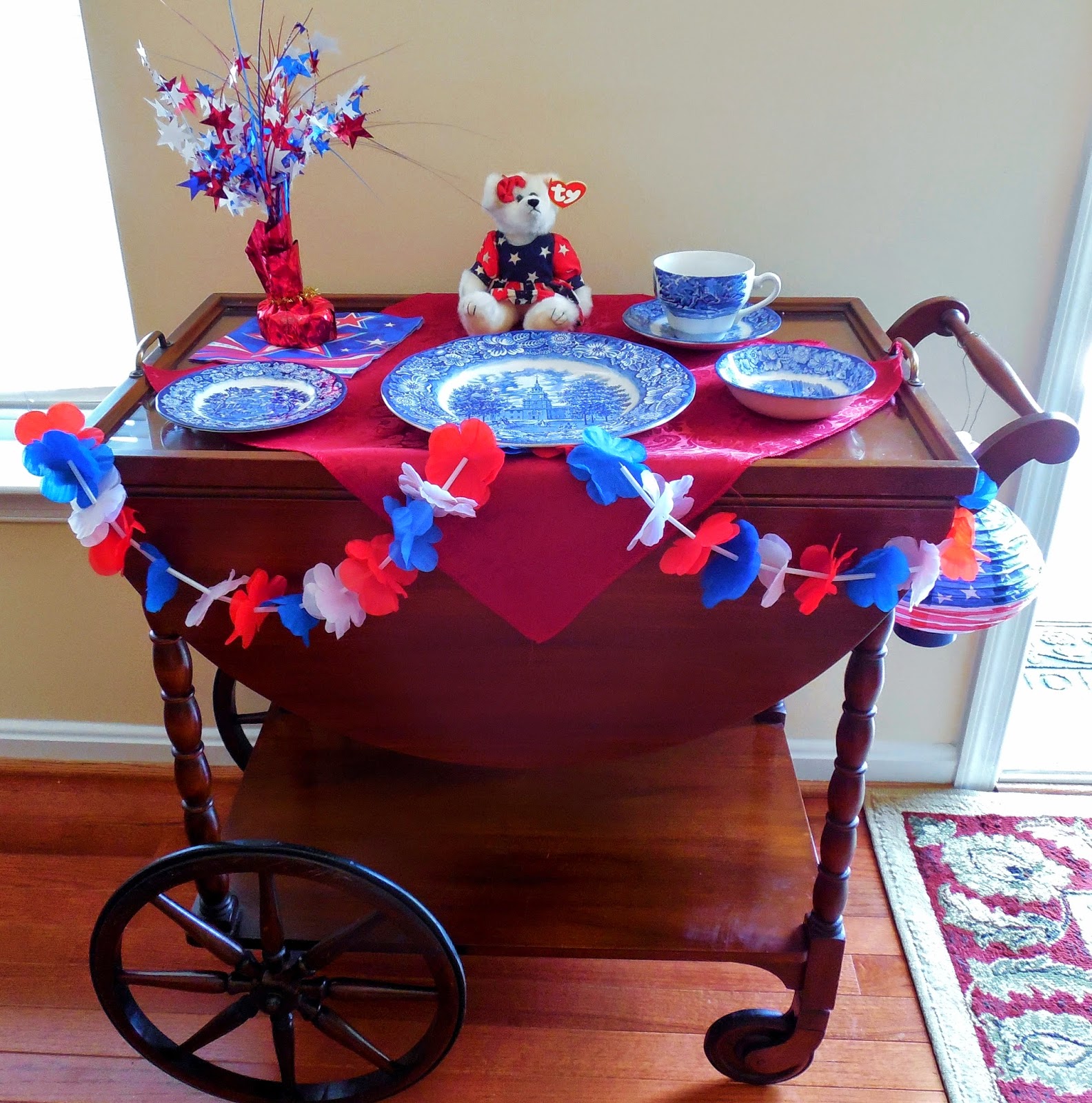 I don't think I have ever shared my entire tea cart before, just the top.  I really like the small size of this cart and its little glass tray on the top--definitely a good thing for me to have to protect it!  I can be pretty clumsy.  My aunt found this cart in Winchester, Virginia, and I knew I had to have it after I went and saw it in person.  After I brought it home, I found out it matches my dining room set, so it really was the perfect tea cart for me.

I thought I would end this post with some of the red and blue flowers in my yard: 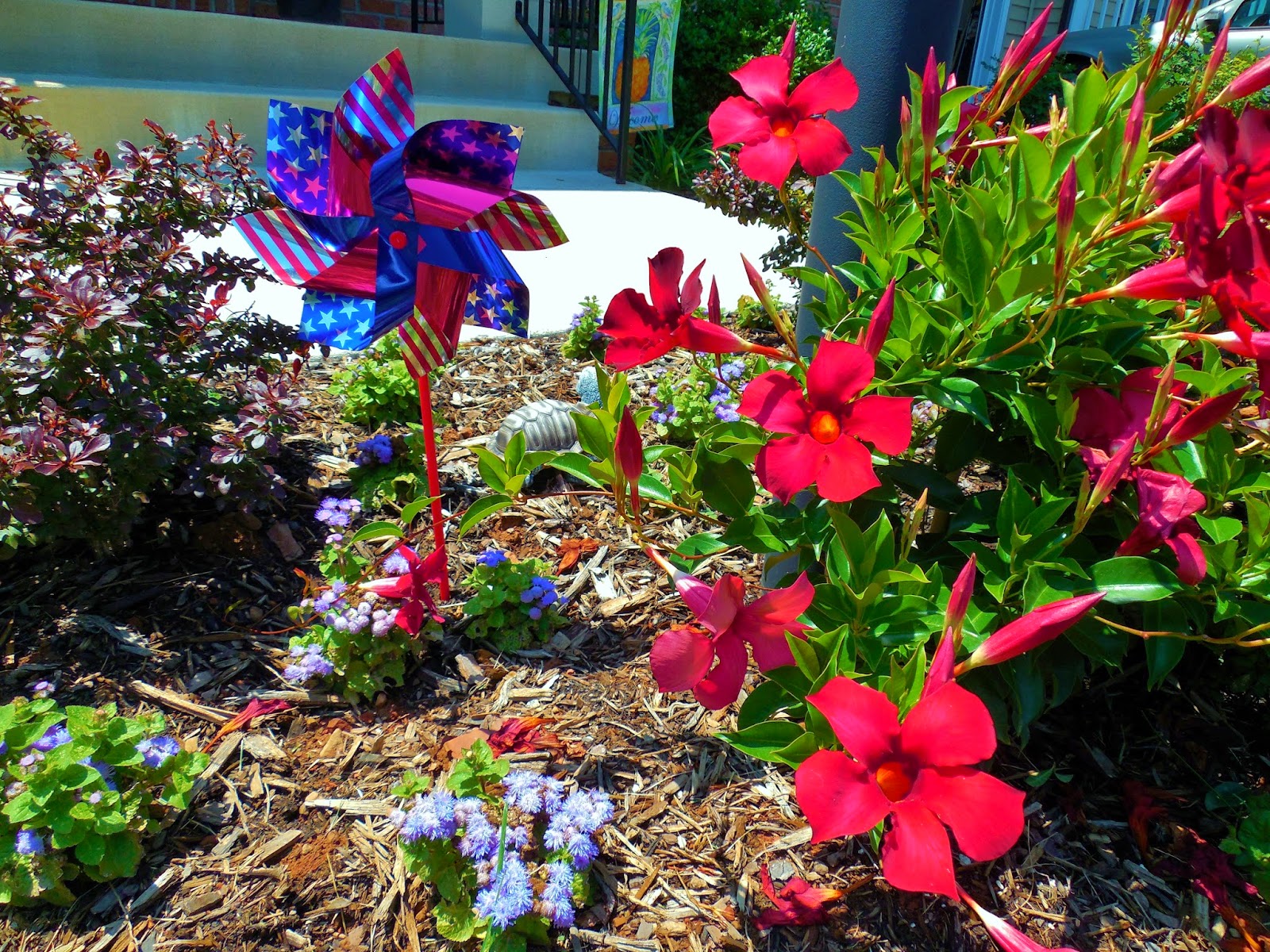 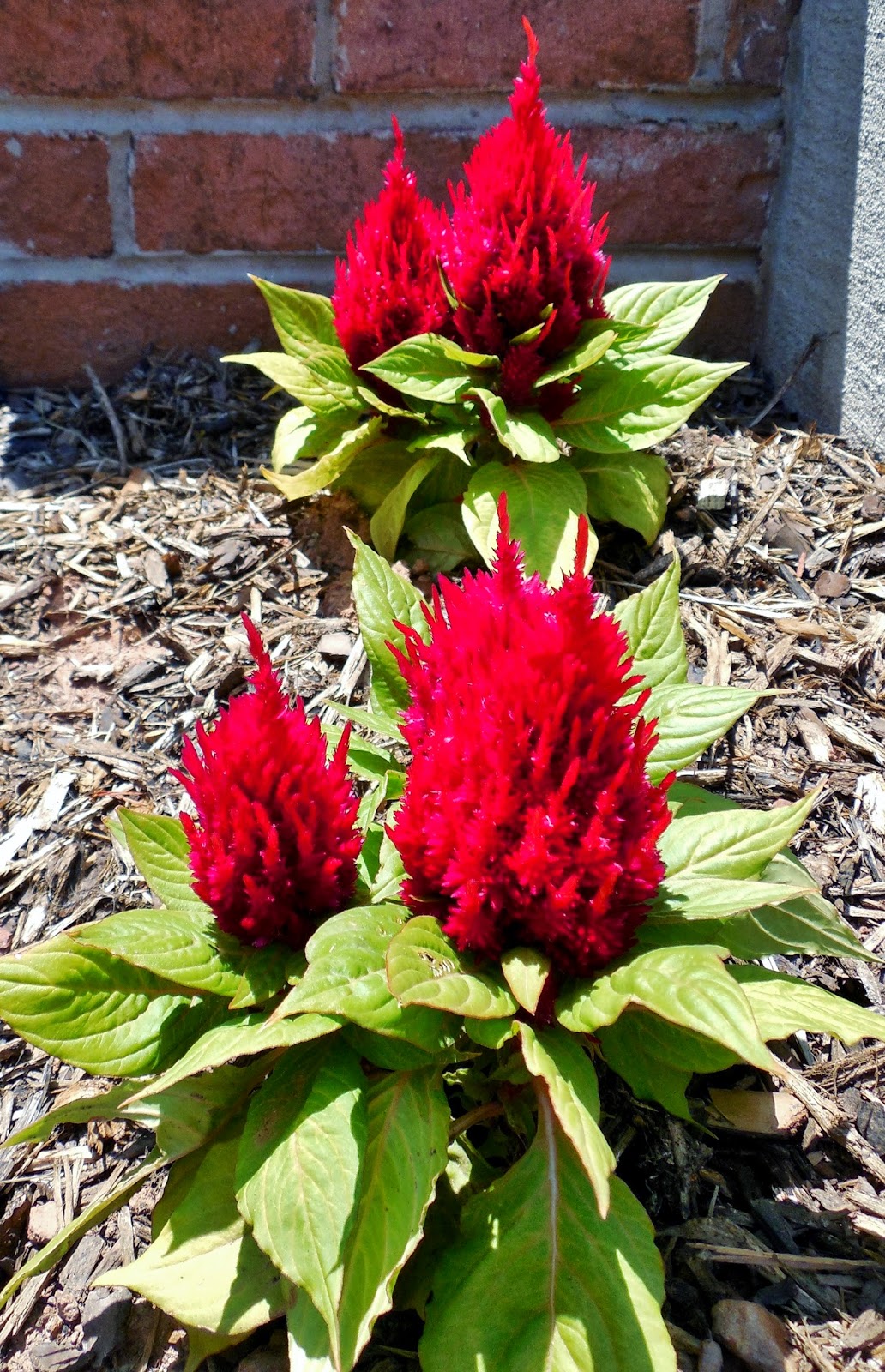 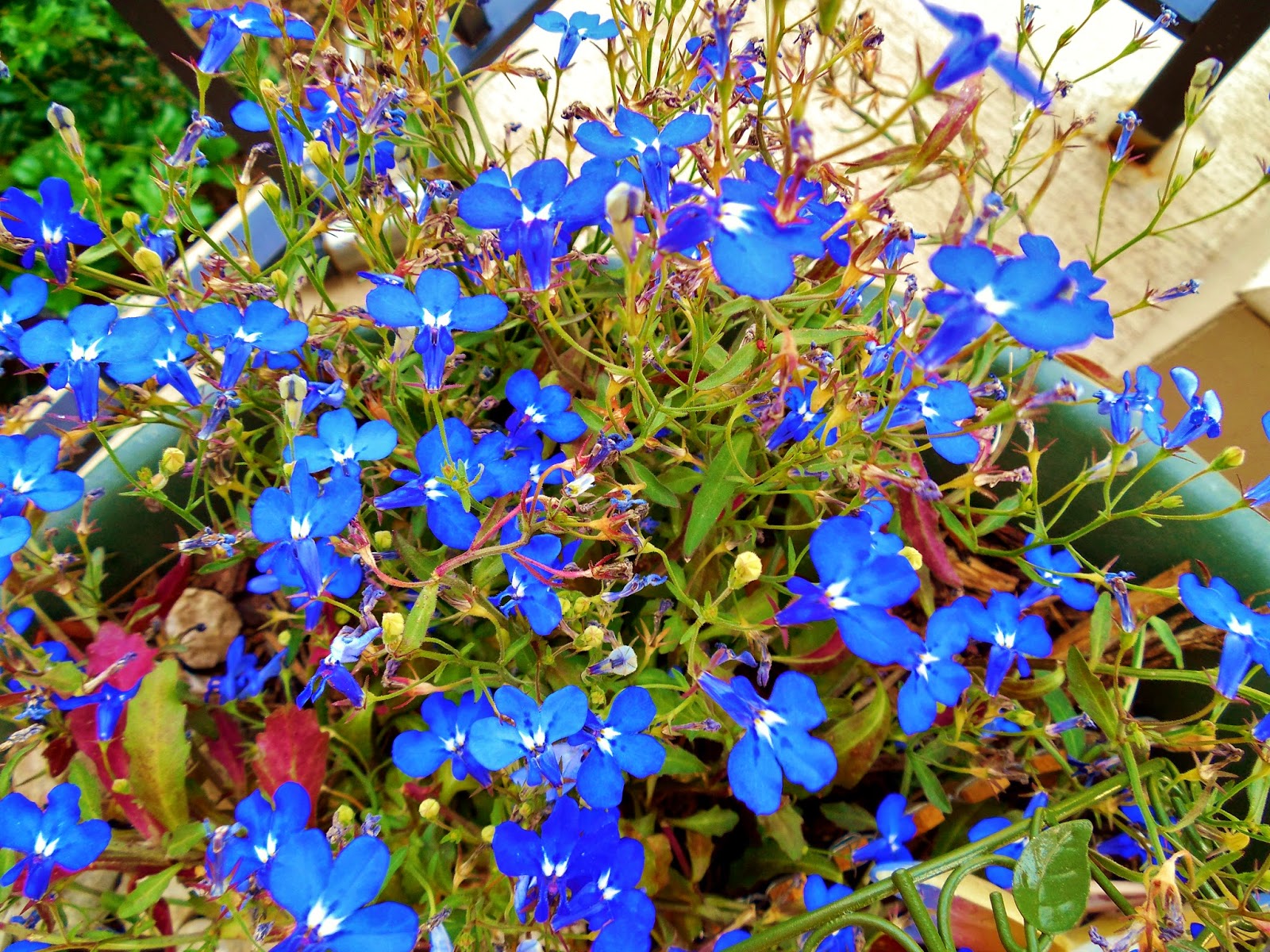 Thanks for stopping by!  Before I sign off for the night, let me just wish a Happy Canada Day to my Canadian readers!  ﻿ 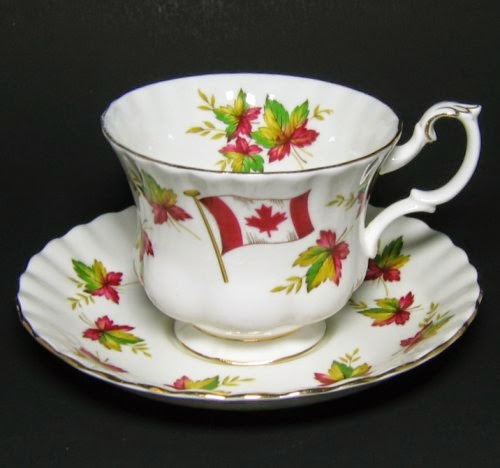