For my birthday, my parents took me to Sweet City Desserts in Vienna, Virginia, for a special Valentine's Day tea. 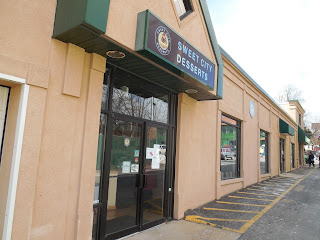 Sweet City Desserts is first a bakery and a window display shows some of their lovely cakes. 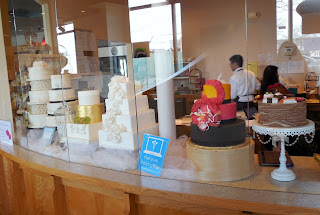 This was my first time visiting Sweet City Desserts, and I wasn't sure what the seating would look like inside, but there were three café areas set up for tea with a mixture of different seating options, including couches. 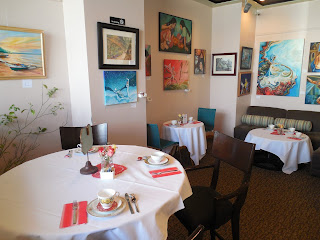 (we sat in this first room at the couches along the back wall, so we had a great view of the artwork by Pilipino-American artists that filled the walls) 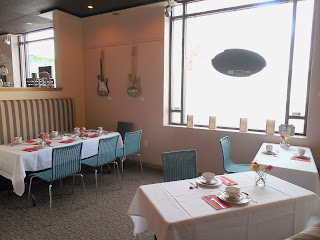 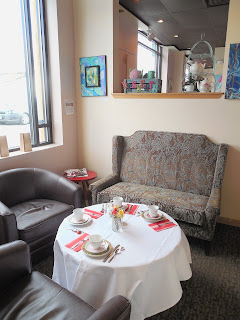 Each table had different place settings--here is a glimpse of ours. 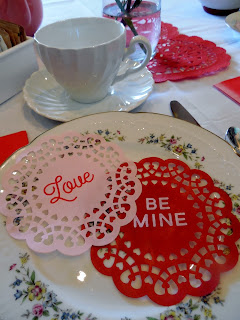 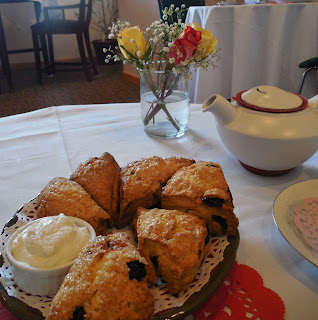 We had a choice of different Mighty Leaf teas, with Earl Grey as the recommended choice for the Valentine's tea menu, which sounded good to me.

We each had two scones, which were delicious, and then the very full tiered tray arrived. 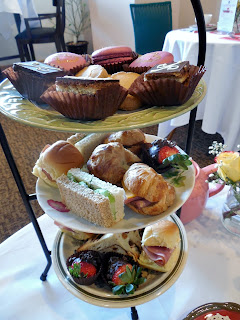 Starting with the savories: cucumber dill, roast beef with cheddar and mustard on a croissant, curried chicken with apples on raisin bread (my favorite), and ham with a pineapple cream cheese spread on a potato roll. 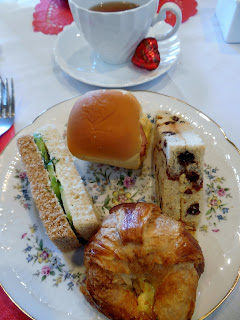 ﻿
I've always thought that the mark of an extra special tea is variety in how the tea sandwiches are served and this definitely hit the mark.  You can also see in the picture above the chocolate heart favor next to my teacup.

After the savories it was of course time for dessert, and, since we were at a bakery, I knew it would be extra special. 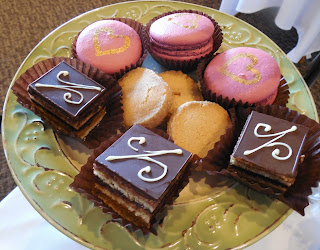 We were not disappointed as there were opera cakes (a bit like tiramisu with a coffee syrup), cinnamon shortbread cookies, and raspberry macarons with chocolate ganache.  In the picture below you can see the last dessert--a chocolate covered strawberry garnished with chocolate shavings.  In other words, lots of chocolate!﻿ 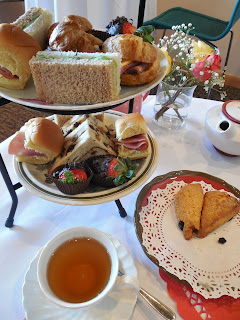 ﻿
Even though we were definitely very full at this point, we had seen a British flag at a shop just up the little alley, so we went up to check it out.  When we walked inside, we found that it sold pasties!  We figured this was the perfect ending of our British inspired day, so we left with a couple of sausage rolls and meat pies.  Let's just say I set my diet aside this past weekend.  It was my birthday after all!

I also wanted to share a couple of my birthday gifts.  My parents gave me a teapot I'll share for another time, but my sister gave me these TWO Royal Albert tea trios. 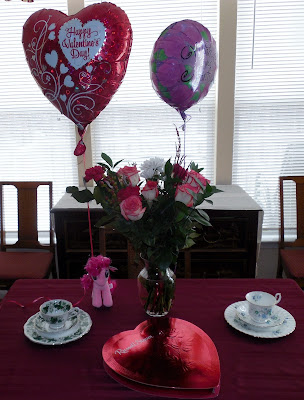 She definitely knows me well picking these lovely two sets out. 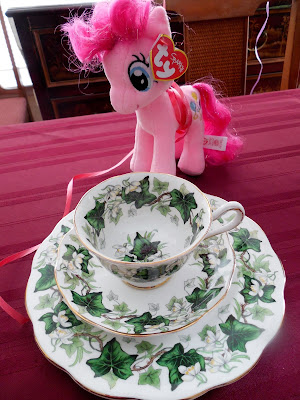 Royal Albert's Ivy Lea.  I think ivy is so pretty, and this set has a bowl cup with pretty interior designs. 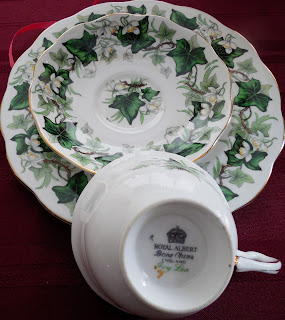 The other set is Royal Albert's Inspiration. 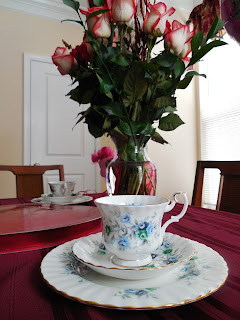 This different colors of blue and green roses in this pattern are so pretty!﻿


Thanks so much for visiting!  I'm joining these link parties: 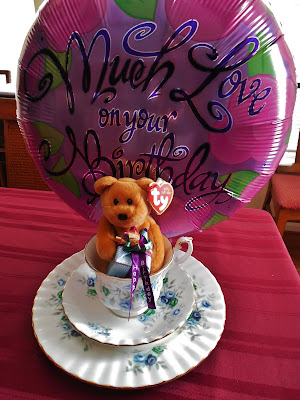