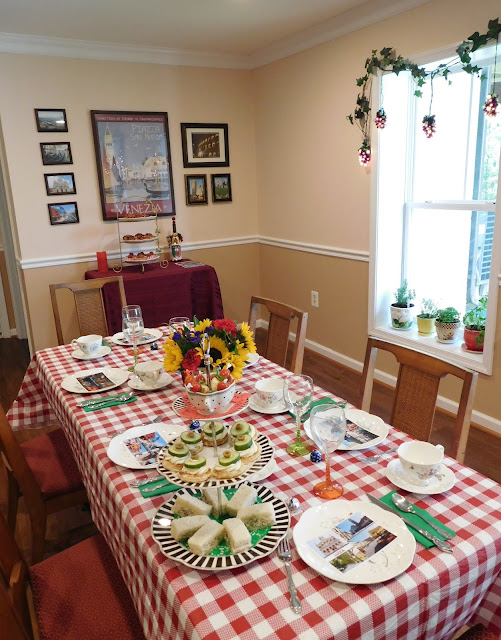 My basement has been a work in progress for a couple of years now, but last month the last touches (the flooring) were finally finished!  To celebrate, I held a Tour of Italy tea--in my brand new basement of course!    ﻿ 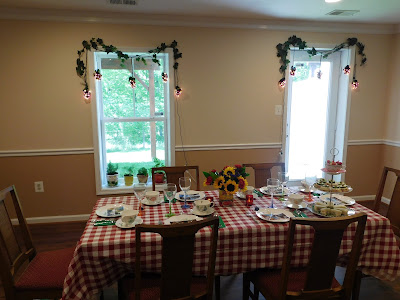 As you can see, the décor is still a bit sparse, but that just made it easier to string up some grape lights to serve as window treatments.

I did decorate one wall with a collage of pictures from my trip to Italy last September.  The poster in the middle was a lucky (and very timely) find at my favorite local thrift store--it is of Saint Mark's Square in Venice (and was only $7!). 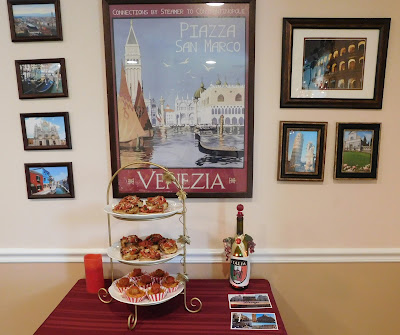 I've been planning this tea pretty much since I came back from my trip.  I had so many ideas (as did pinterest--people are so clever)!  ﻿ 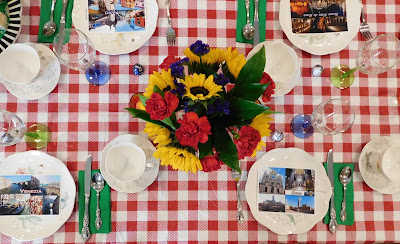 ﻿
I made postcards of the different places I visited to serve as the menu using some of my favorites of the pictures I took in the different cities/towns.  I had more than this (for example, you can see Venice and Burano in the picture above), but here are a couple that I remembered to take a closer picture of:
﻿ 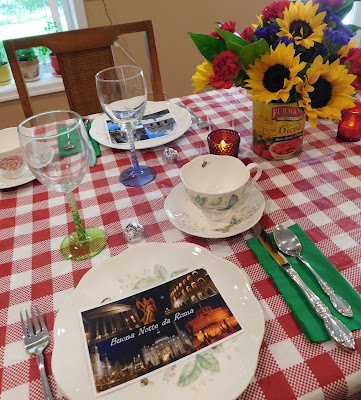 (Nightime pictures taken in Rome.  Do you also see the tomato can I used for the sunflower centerpiece?  I saw that on pinterest and thought it was so cute, and it came out so nicely!) 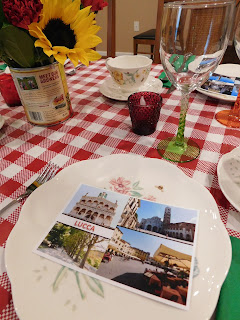 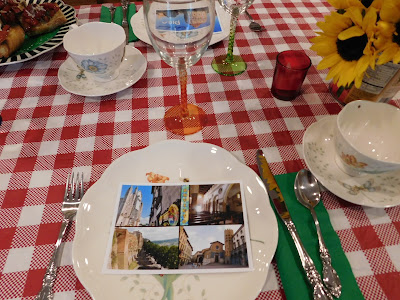 (Orvieto, a city on a hilltop in Umbria) 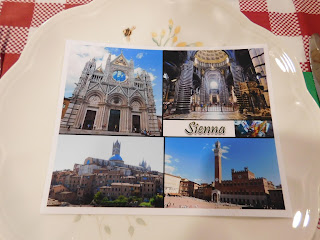 (Sienna--one of my favorite places that I visited, in Tuscany)

And here is the back of the postcard menu: 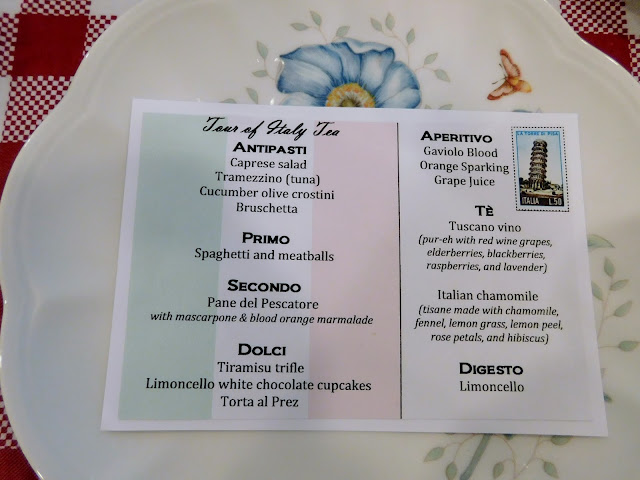 I based the menu on a traditional Italian meal--with a couple of changes to made it an "afternoon tea."

First I served the Aperitivo while I was taking pictures and waiting for the last couple of guests--Asti sparking wine imported from Italy (a popular last minute contribution to the party from my dad so it didn't make it on the menu) and non-alcoholic blood orange flavored sparking grape juice made in Italy from Italian wine grapes. 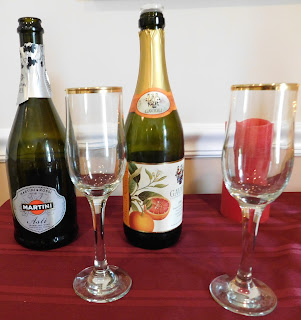 Next we have the Antipasti (the "appetizers" in English).  I served caprese salad skewers, cucumber olive crostini, and tuna tramezzini (the name for tea sandwiches served in Venice).  All of these foods would be served as "appetizers" in Italy,﻿
﻿ 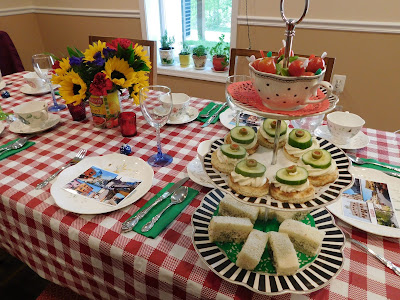 along with the last of the antipasti--bruschetta!﻿ 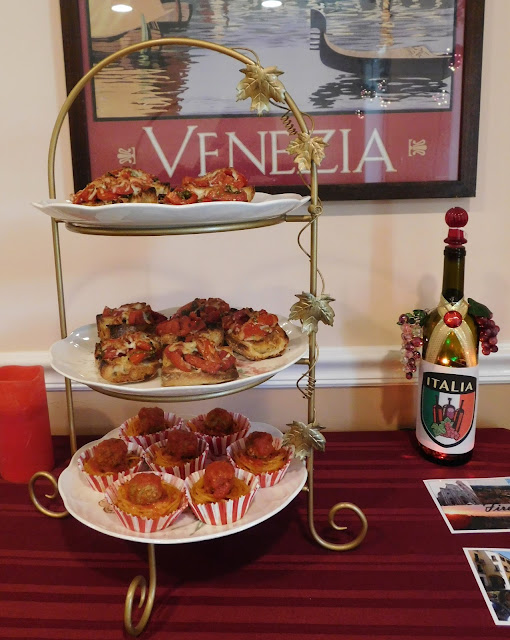 Next we had the "primo" course (in English the first course) which is typically a pasta dish in Italy--so, spaghetti and meatball "cupcakes"! 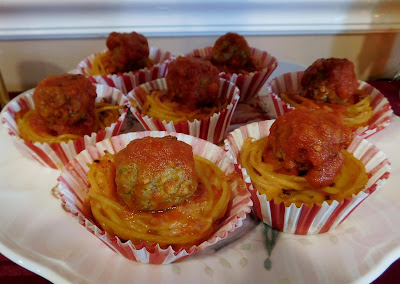 But of course with any Italian meal, there must be wine, so I served a "wine" tea.  This pur-eh made by rishi is called Bordeaux and is made with red wine grapes, elderberries, blackberries, raspberries, and lavender.  I was a bit nervous about serving a pur-eh since I haven't even decided if I like this kind of tea, but this version was a very good fruity tea, and my guests enjoyed it.﻿ 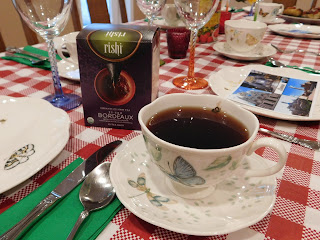 (just as a side note, Bordeaux is a French wine, but there are wines made with those same grapes in Tuscany--they are called "Super Tuscans" so I figures this was close enough).

Next we have the Secondo course (second course) which would typically be a meat course in an Italian meal, but for a tea, this was the perfect time to bring out the scones!﻿ 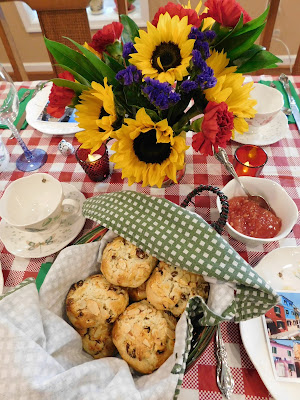 These are pane del pescatore, "bread of the fisherman," a traditional cookie like bread served in Florence that is the closest thing to an "Italian scone," but more on that when I share recipes later this week.

Next up we have the Dolci (Dessert).  A friend brought a lemon mint cake (very yummy and refreshing) pictured in the center on my green cake stand, and in the front are tiramisu trifles that I served in my little crystal teacups. 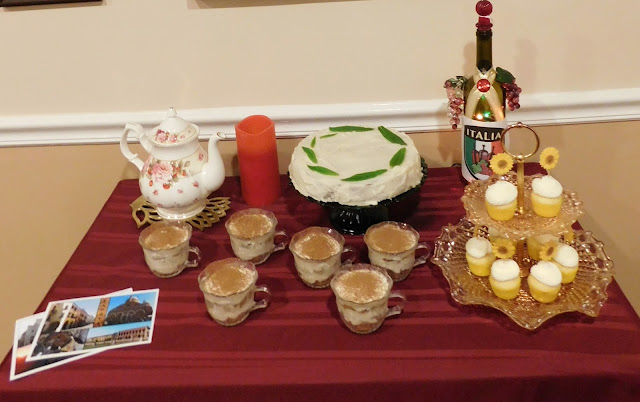 And here is the last dessert--Limoncello white chocolate cupcakes!﻿ 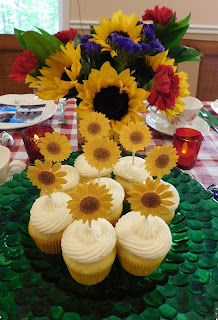 After all that food, there is only one thing left to serve--the Limoncello digesto, sipped from these amber cordial glasses.  In case you have never heard of it, Limoncello is an Italian lemon liqueur.  It is often served after a meal to help with digestion. 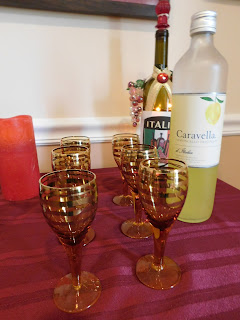 I didn't get a good picture of them, but the tea favor for this party was a Baci Italian chocolate.
(from the internet)

Here is one final view of the room.  My father did all the work to finish the basement (except for the flooring), and I think he did a wonderful job!﻿ 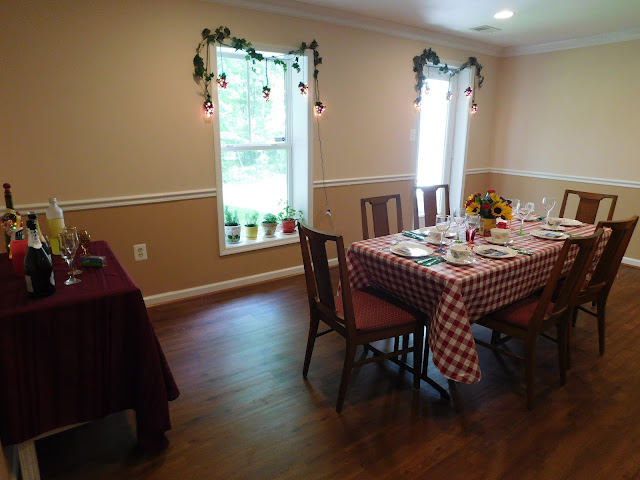 Here is a closeup of the herbs in the window--rosemary, dill, basil, and parsley--to make it look maybe a little like a trattoria (a name for a "homestyle" Italian restaurant).  ﻿ 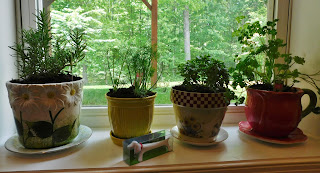 (I used to say I would maybe get a dog when my basement was finished--I work too many hours so that won't happen--so my friend gave me a dog pen as a "basement warming" gift!  I got a kick out of that).

I'm so glad you could join me!  I will be sharing recipes from this party all week long.  I'm also joining the following parties:
Bernideen's Tea Time, Collage, and Garden Blog Party
No Place Like Home
Tuesday Cuppa Tea
Update:  Below are links to posts with the recipes from today's tea.
Antipasti
Primo:  Spaghetti and meatballs
Secondo:  Pane del Pescatore
Dolci:  Tiramisu Trifle and Limoncello White Chocolate Cupcakes
﻿
﻿
Posted by Carrie at 10:29 PM