Today I'll share more about the food served at the Carousel tea on Tuesday and why I chose those items.  Here's the menu again: 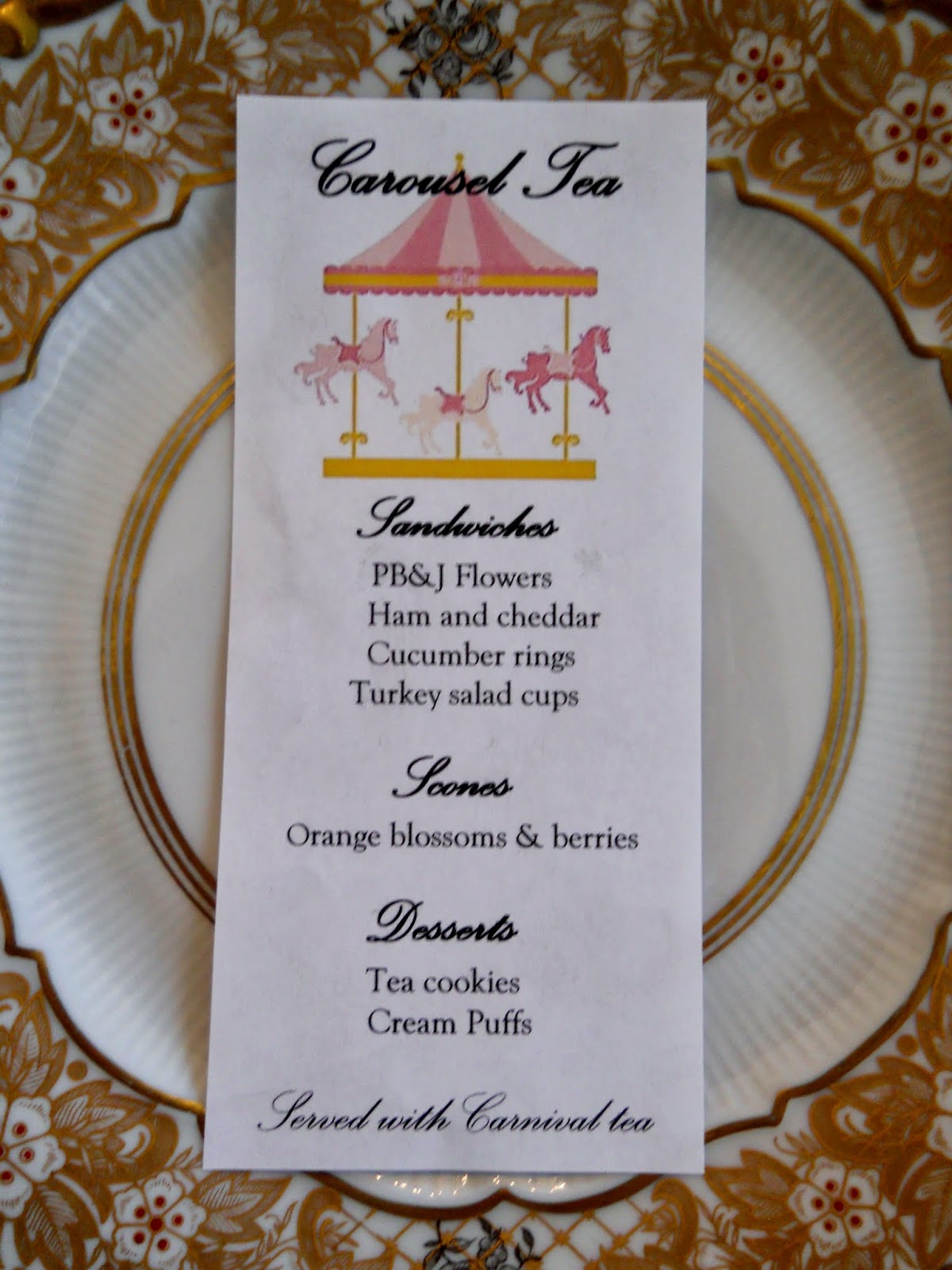 (carousel picture in menu from the internet)
The theme for the tea was on the invitation:  "Won't you join me for a Carousel tea, as childhood memories go 'round merrily?"  I wanted the food served at the tea to be reminiscent of childhood.
So, let's start with the first course, the tea sandwiches: 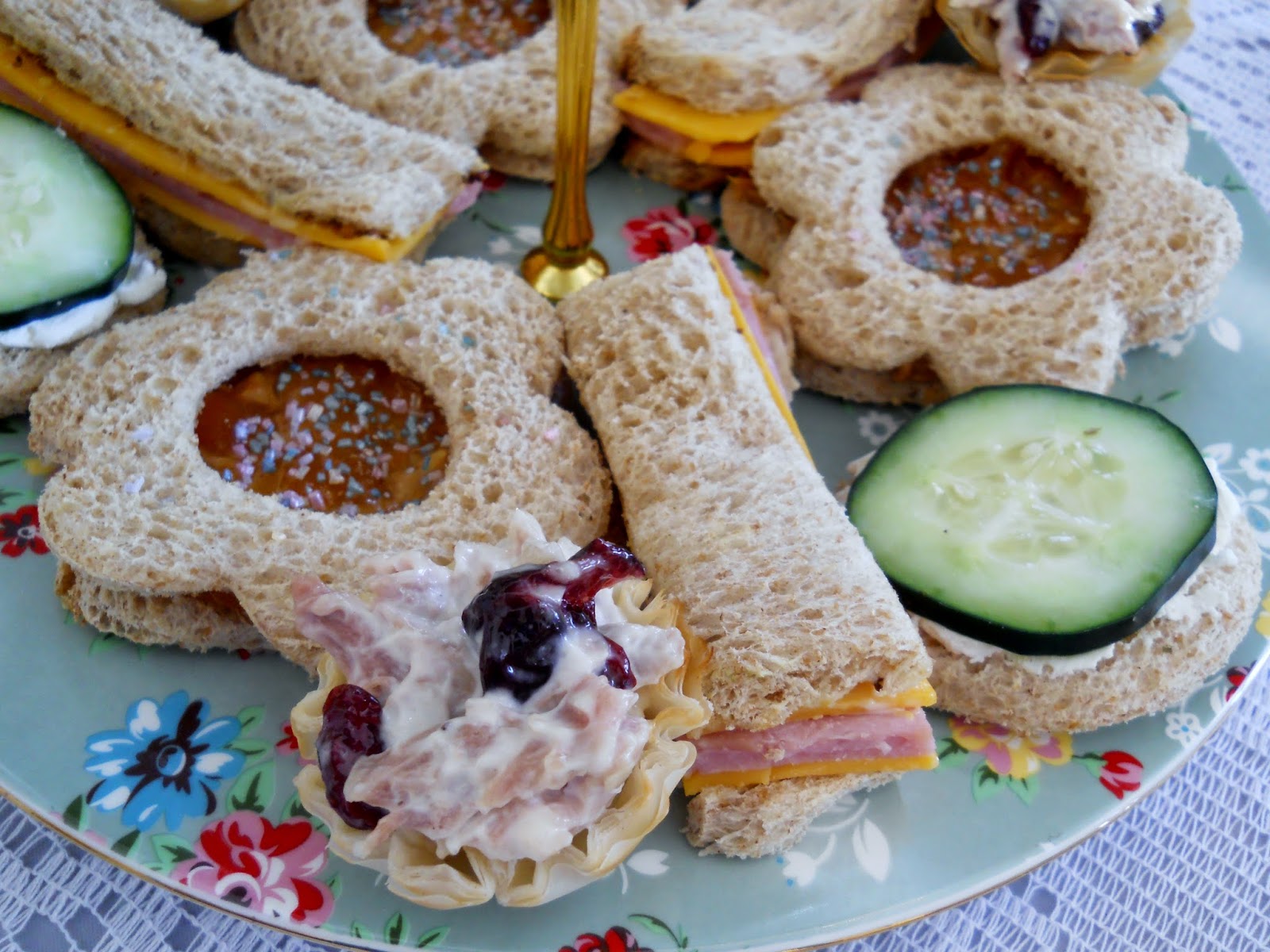 I served peanut butter and jelly on flower shaped bread using a flower cookie cutter and a smaller round cutter to cut a circle in the middle, so you can see the jam peeking through.  What could be more "child-like" then a cute pb&j sandwich?  I just used apricot because I had a jar already opened, but if I was doing this tea for real, I would use strawberry or grape, the "traditional" lineup.  To add to the whimsy, I sprinkled some coarse colored sugar on top.

The next sandwich is another common one from when I was a kid, a ham and cheese, here cut in a long strip.  To make it a bit more interesting, I added a bit of "grown-up" ground mustard to the mayo.

The cucumber sandwich is just with cream cheese.  I left the skin on the cucumber even though I normally wouldn't to emphasis the circle, just like the brass rings you could grab on antique carousels to win a free ride.

The last "sandwich" is a turkey salad in phyllo cups I made up that turned out really yummy!  I used a left over turkey leg from dinner and shredded the meat and added mayo, a dash of sugar, a pinch of salt, some lemon juice, and a few craisins. 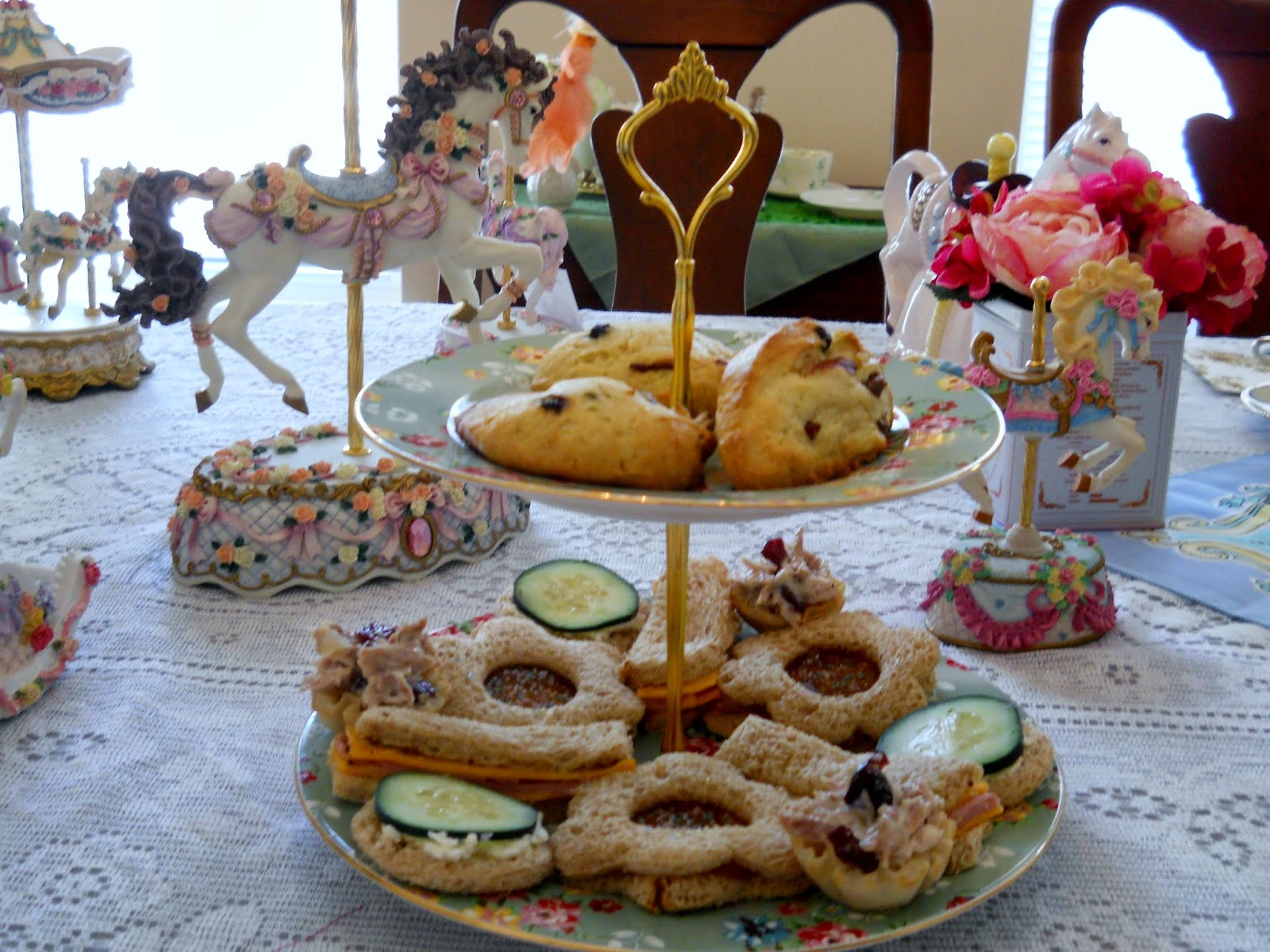 The scones I served are the same ones I shared the recipe for last week:  http://teatimejourneys.blogspot.com/2014/03/orange-blossoms-and-summer-berries.html

Now on to the desserts!  The cream puffs were a fun experiment as I hadn't made puffs before.  Now I have visions of chicken salad puffs, egg salad puffs, flavored dessert puffs, the possibilities are endless!  My sister had the idea to add a bit of green food coloring to the pudding inside to add to the fun, and green because of St. Paddy's day coming up. 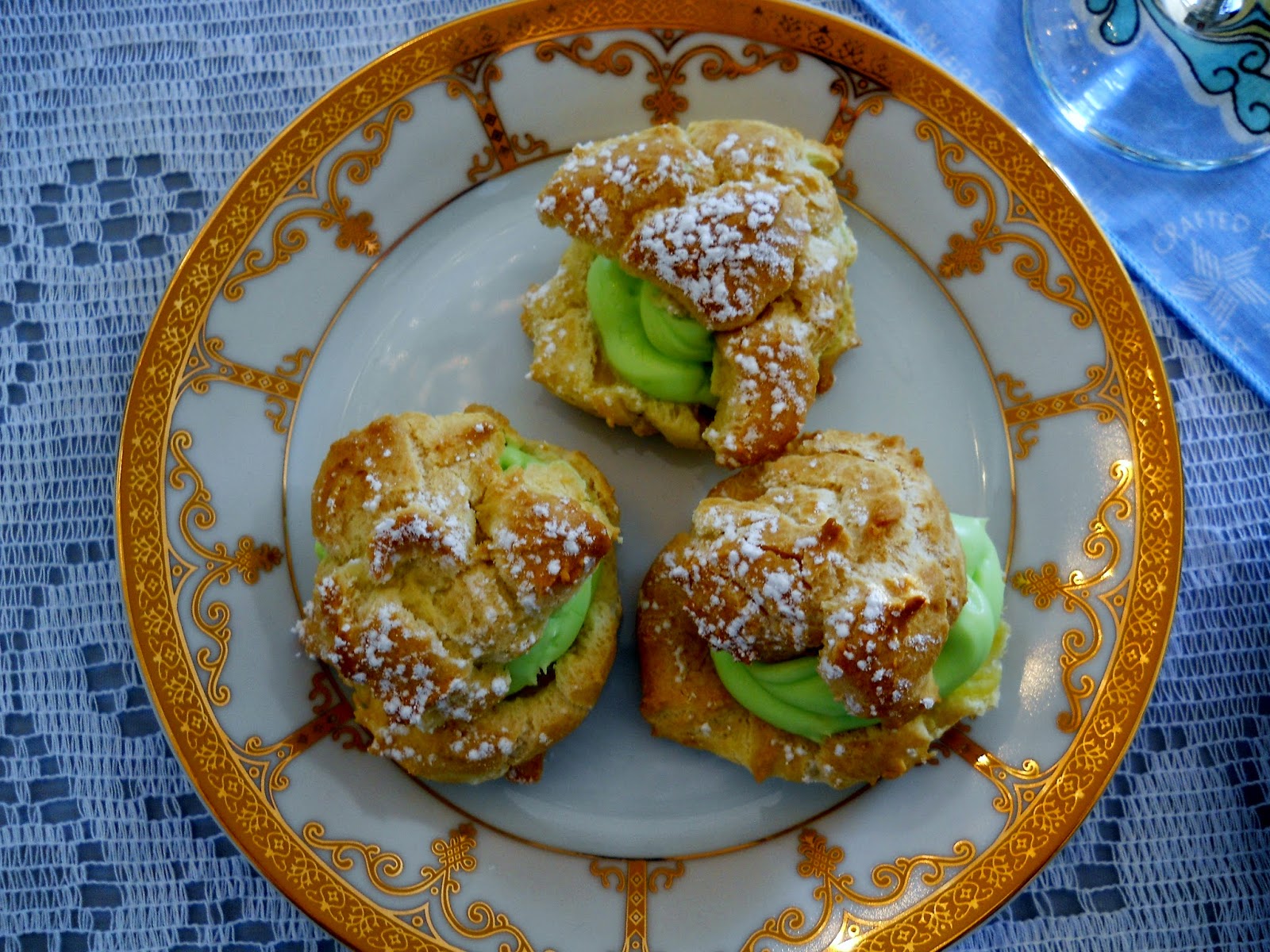 I just used the recipe here.  I did have to make a couple of changes to the preparation/baking.  I let the dough cool before adding the eggs.  When baking the puffs, I put them into the oven for 20 minutes and then took them out and pricked them with a toothpick so that they wouldn't fall.  When I make them again I will put the dough in a icing bag and pipe it so that it is a bit more attractive.

Finally, you're probably wondering what happened to the tea cookies. Actually I  am not eating desserts because of Lent, so I didn't make them (I didn't try the cream puffs either, but my taste testers said they were good).  Even so, I think they would be the perfect ending to this tea.  Nothing is more kid-friendly then a cookie with brightly colored sugar!  The cookies below are from the last time I made some for a friend's baby shower.  Unfortunately, this was pre-blog so the picture isn't blog quality, but imagine three being served with the cream puffs on the pretty gold plate above.

Thanks for joining me this week.  On Saturday I'll start the blog's countdown to St. Patrick's Day so stay tuned!