Before I start sharing recipes (tomorrow, I promise!), I received a comment on my blog this morning from Anonymous, suggesting I might have served another plate of food at last weekend's brunch...which is true since I also had a plate of Gingerdead! 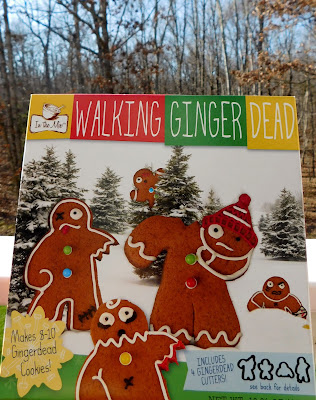 I received this kit as a present from a friend (let's just call her A, which, coincidently, is also how Anonymous starts :-P) last Christmas and had originally planned to feature them in October as a fun Halloween treat.  But, long story short, I didn't post much that month, and Christmas just rolled in again...so while gingerbreading... 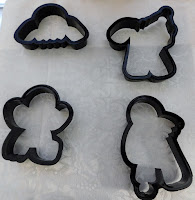 out the gingerdead cutters came, so I guess I was gingerdeading!

My piping skills are very un-advanced, but these cookies definitely don't have to be beautiful. 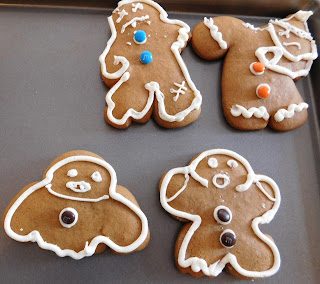 Starting at the top: 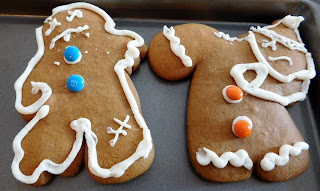 ﻿
Peg legged and headless gingerdead.  I messed up the piping along the top of the head-ed cookie on the left when I picked it up right before taking the picture, but I figure now it just looks like something took a bite out of it.

Next we have leg-less and freshly bitten gingerdead. 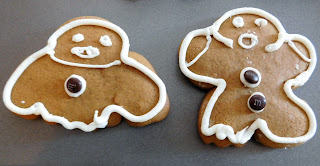 It's not often you get to take a bite out of a ginger-zombie.

The kit came with all sorts of stuff, including: a cookie mix, icing mix, the special cutters of course, and candy and icing tubes for decorating. 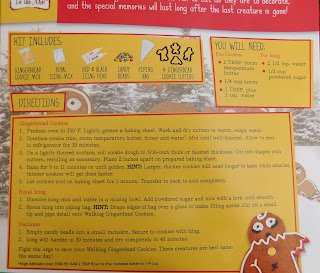 ﻿
I actually saved most of this for my sister--she watches Walking Dead with her boyfriend, and I thought they would enjoy making these cookies over the holidays.
Posted by Carrie at 10:52 PM

Email ThisBlogThis!Share to TwitterShare to FacebookShare to Pinterest
Labels: Christmas 2015